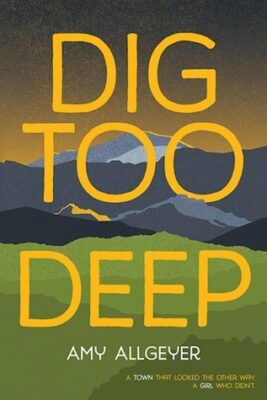 During junior year of high school, Liberty expects her focus to be on doing well in school and getting ready for college. Then her mom gets convicted of ecoterrorism and sent to jail, and Liberty finds herself moving to a rural mining town in Kentucky to live with her grandmother. Luckily, Liberty and her grandmother have a solid connection, and Liberty’s emotional needs are well met by the older woman. But the transition is a struggle, as Liberty must find her place in a new school with a new culture.

Liberty notices right away that things have changed in the region since the last time she visited. The whole top of the mountain behind her grandmother’s house has been removed in order to dig out the coal, and the process has changed the landscape entirely. Then, one by one, Liberty learns that the town’s residents are becoming ill. Eventually, that number includes her grandmother. Granny suspects that the very water has been poisoned by the chemicals used in the coal mining operation, but the mining company has supplied her with water test results that show that her water is safe.

Liberty, who learned activism at her mother’s knee, is not about to let Granny’s suspicions go without investigation. But the closer she gets to the truth, the more things fracture around her. Her new relationship ends, her friend group splinters, and threats are made against her and her grandmother. Eventually, a few people begin to come around to her perspective, and to wonder if the coal company, which has them all in its grip with the promise of stable jobs, is actually killing them. With the help of friends who are committed to learning the truth, Liberty takes a stand against the coal corporation’s owner, forcing him to take steps to ameliorate the damage he has caused.

This book does a great job of introducing readers to the issue of mountaintop removal, including the complex relationship between miners and the land they work. It presents the economic realities and dependence on mining jobs in a frank manner, while also demonstrating the love of land that most miners have, and their own quiet despair at having to choose between work and environmental degradation. Liberty’s relationship with her granny carries the book. Their banter and affection is fun and genuine, making it easy to understand why Liberty would rally to protect her grandmother and their water source even though she resents her own mother, who was incarcerated for environmental activism. Her relationship with her grandmother also helps her realize that fighting for what you believe in is a family trait – not just something she can run away from because she doesn’t like how her mother did it. Granny forces Liberty to think about where her roots are and where she wants her branches to grow. 4 of 5 stars.