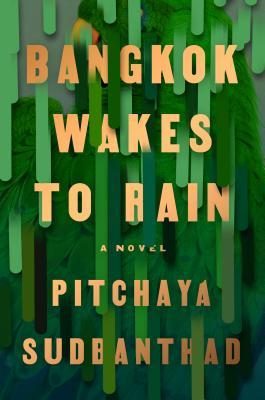 This July, we are fortunate to travel to Bangkok, Thailand, to explore Pitchaya Sudbanthad’s Bangkok Wakes to Rain, published by Riverhead Books (US, 2020) and Sceptre (UK, 2019); in 2019 it was selected as a notable book of the year by The New York Times and The Washington Post as well as a finalist for the Center for Fiction’s First Novel Prize. I read the book in April, while adjusting to our new life in Nova Scotia, and would read at night in the absolute silence of the new place. The novel is a beautifully written elegy to Bangkok’s collective memory.  It’s a forever moving piece of not just place writing but period/cultural writings, which in that sense began to remind me a little of James Michener’s The Drifters (a novel I read and enjoyed as a teenager) but much more significant, bound by wild prose and history–including the present and climate change–not holding together the characters and their experiences together by mere threads but, seemingly, much more fluidly. Can I say that it haunted me drop by drop?

A missionary doctor pines for his native New England even as he succumbs to the vibrant chaos of nineteenth-century Siam. A post-World War II society woman marries, mothers, and holds court, little suspecting her solitary fate. A jazz pianist in the age of rock, haunted by his own ghosts, is summoned to appease the house’s resident spirits. In the present, a young woman tries to outpace the long shadow of her political past. And in a New Krungthep yet to come, savvy teenagers row tourists past landmarks of the drowned old city they themselves do not remember. Time collapses as these lives collide and converge, linked by the forces voraciously making and remaking the amphibious, ever-morphing capital itself. Bangkok Wakes to Rain is an elegy for what time erases and a love song to all that persists, yearning, into the unknowable future.

Recreates the experience of living in Thailand’s aqueous climate so viscerally that you can feel the water rising around your ankles.

Mary: I found Bangkok Wakes to Rain to be a profoundly moving story, mostly due to the expanse of time in which it unfolds, the deep dive into character-building, and the place writing. What motivated you to write this stunning novel?

Pitchaya: I’ve spent my life witnessing the many ways Bangkok has changed over decades, at distances near and far, and as both an insider and outsider. It’s an inherently novelistic point of view that helps me try to make some sense of a city that is in a perpetual process of conflicted reinvention. In writing my novel, I was propelled by curiosity about a place that is intimately familiar to me and yet unknowable. I put my imagination down on paper and just kept trying to see what came next.

Mary: The novel seems to be one that hopes to preserve history by making us remember certain times, whether or not we’ve lived through them–but it also seems to be fluid and moving, like the life force of rain and water flowing constantly in Bangkok. When you wrote the novel, did you also plan to write about our present crises of climate change and how that is changing Bangkok? There is that wish to preserve life before climate change too?

Pitchaya: In the early days, I had no preconceived idea that I would touch on the climate crisis in my novel, even as someone with a degree in environmental studies. It eventually became self-evident that if I were to extend my imagination into the future, a Bangkok literally in deep trouble because of rising waters was more likely than not. I needed to project the novel forward with the climate crisis as part of the city’s arc.

Yet, in thinking of the catastrophic effects of a flooded city, I also saw the future reversion of Bangkok to what it had once been: a low-lying amphibious capital city with extensive networks of waterways, before much of it was contorted from its nature to match humankind’s trivial ambition of capital growth. What do we hope to preserve then? What will we mourn of a landscape’s forced deviation? Bangkok, like many cities, feels like a flickering dream of an unsustainable civilization. We will try to hold on to it for as long as we can.

Mary: Another reason I gravitated to the novel is because it’s nonlinear, and I think most of us really make sense of life that way. The past is constantly creeping up in memories–especially the older we get–and the present and future are highly uncertain, which sometimes makes us miss something more solid from the past, even though it too was usually surrounded by uncertainty. In Bangkok, one of the constants is the house in which various people flow, like ghosts. Care to comment more about these themes in your novel?

Pitchaya: I have a propensity to try to bring a place in my mind, where it’s not just background but an entity in itself. I find that a place is never a thing with a clear, definite shape. It fluctuates, obscuring and revealing. Telling the story in some kind of straightforward narrative made less sense to me for this novel.

I find that place is usually many things to different people at various points in their lives, and so it is deeply rooted in character and time, which are always restless. Someone can be somewhere and experience a place in time far differently from others, and so memory can also be place or a sense of it. This is especially true for a city like Bangkok, where so much has been built and replaced and rebuilt again and where there are layers upon layers of social stratification everywhere. I always see the city with a kind of double or triple vision, where the present, past and imaginative are spectrally imposed over one another.

Mary: What is the background of your creation of the main characters, such as Nee, Nok, Clyde, Phineas, Sammy, and Pehn?

Pitchaya: It’s hard to pinpoint any one inspiration for each of my characters. Whenever I’m in Bangkok, I collect stories from relatives, Thai history books, folk lore, and mass culture into the same general chest of narrative construction blocks. I do some minimal amount of research to get a more accurate feel, and then I mostly see what happens. There’s a little bit of this and that in every character, and most of what ultimately made it into the book is the characters becoming what the novel needed of them, by my imagination.

Mary: And then the novel switches into the future, where the character Woon is introduced. This takes us back to my earlier climate change question but also my earlier remarks about preservation. The themes of submergence and rescue come into place as Woon rescues artifacts such as art and old letters that have been lost by rising waters. I kept thinking the whole time how important fiction is because it also preserves our memories, albeit creatively. Can you comment more?

Pitchaya: With a climate crisis likely, I tried to think of all that would be lost in Bangkok, not just in terms of the physical aspects, but the sensuous and spiritual. I think fiction can help perpetuate a few complex visions of the city, just as an old painting can let us emotionally glimpse the impressions of city or landscape from centuries ago. I say perpetuate rather than preserve, because a future reader’s vision will also be colored by the experiential palettes of their own time. With all the documentation and data collection happening now, they may be able to reconstruct and relive our current experiences in ways we can hardly imagine, but reanimation is different from any singular remembrance. Who will remember Bangkok in a few hundred years? What will they see and feel? I don’t know. It will probably be a far different reconstitution of Bangkok from what I believe my writing depicts today.

Mary: After the novel was published, Covid-19 came along, making us even more on edge. How have things been for you?

Pitchaya: I know I’m fortunate in being able to maintain a very science-based hermetic existence during this pandemic, largely keeping to myself while staying awake at odd hours and communally doom-scrolling with the internet-captive masses. I’m also in pretty close contact with relatives in Bangkok and get a lot of visibility into the widespread, strict adherence to safety practices like face mask-wearing and social-distancing that’s far different from the easy disregard I’ve seen in America, even in a virus hot zone like New York City. The linkages of organized misinformation between the denial of epidemiological science and climate science denialism are made clearer to me and probably others paying attention.

Mary: Are you working on anything else now?

Pitchaya: I’m exploring and working through a few ideas. That’s all I usually say.

Mary: Thank you so much for your time in talking with Dragonfly.eco and for your brilliant novel! 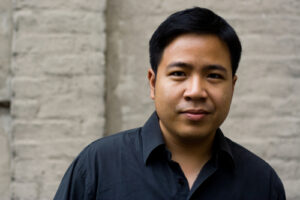 Pitchaya Sudbanthad is the author of Bangkok Wakes to Rain, which was selected as a notable book of the year by The New York Times and The Washington Post. The novel, published by Riverhead Books (US) and Sceptre (UK), has been hailed as “ambitious and sweeping” (Esquire) and “a remarkable debut” (Financial Times) with a narrative that “recreates the experience of living in Thailand’s aqueous climate so viscerally that you can feel the water rising around your ankles” (Washington Post). It has also been named a finalist for the Center for Fiction’s First Novel Prize, the Casa delle Letterature Bridge Book Award, and the Edward Stanford Award.

Sudbanthad has been honored with fellowships from MacDowell and the New York Foundation for the Arts. Among the publications to which he has contributed are: Newsweek, Freeman’s, Guernica, Electric Literature, The Millions, and The Morning News. Born in Thailand, he currently splits time between Bangkok and Brooklyn.