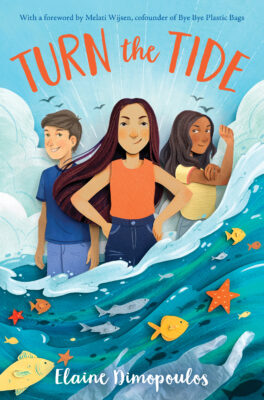 When twelve-year-old Mimi Laskaris moves to Wilford Island, Florida, she immediately falls in love with the beautiful shoreline and its creatures. Then she discovers “ghost bags”—single-use plastic bags that have been left to litter the beaches. Mimi collects as many as she can, but there are always more.

At her new school, Mimi’s science teacher plays a video about youth activism, which introduces Mimi and her classmates to sisters Melati and Isabel Wijsen, founders of a grassroots movement to combat plastic pollution in Bali, Indonesia. Mimi is immediately drawn to organizing a similar campaign on Wilford Island—as is the most popular girl in her class, Carmen Alvarez-Hill. When Carmen invites Mimi to her house for planning, Mimi wonders if it might be the start of a new friendship.

Their movement finds momentum quickly. With the support of their science teacher, the girls draft a petition to take to their city council. They have to avoid certain language that would break Florida’s preemption laws, which prohibit local governments from banning plastic bags. Carmen’s dad owns the local grocery store and offers to supply reusable bags for a signature-gathering kickoff event. With Carmen’s mom’s help, the girls create an event to remember and get a solid start on collecting signatures. They also find allies in the owners of the local small bookstore.

However, it’s not all smooth sailing. Some kids at school think the girls are “crazy obsessed,” leading Mimi to worry that she won’t be able to make friends. Her best friend from home also seems bored by the plastic bag talk, and Mimi’s mom isn’t enthusiastic about this project that’s taking Mimi’s attention away from her piano practice. Mimi wants balance, but doesn’t know how to make that happens. She feels like she’s going to fail at everything. To top it off, some business owners oppose plastic bag reductions because of the higher cost of paper bags.

Then, trolls start attacking Carmen on social media, leading her to shut it down. Another student, Ethan, flubs an attempt to get an editorial in the local paper. Even Mimi’s plants are infested with bugs. Mimi rallies by helping plan a beach cleanup event with her new bookstore owner friends, thinking that she can collect signatures there. Then one of the owners has a heart attack that cancels the event. Mimi thinks she should probably just give up.

But small actions lead to bigger actions. As Mimi takes baby steps towards building her new friendship and opening up to her parents, a way forward appears. With everyone contributing their ideas and talents, the Plastic Bag Campaign finally gets its day in front of the city council. There’s still work to be done, but with her new coalition-building skills—and her new community—Mimi knows that she can keep taking the next step.

Turn the Tide is a great, accessible book for middle grade readers that teaches the power of the individual to effect change. Mimi references many youth leaders who have already impacted the environmental movement, and the back matter of the book provides additional information. Mimi’s struggle to find balance is very relatable, and the book does a good job of both encouraging youth to take action for what they believe in, and not to lose themselves entirely in the movement. Also, while Mimi’s move to a new community is a subplot of the book, her journey of grieving the things she’s left behind and learning to love her new home is relatable, as is her family’s financial stress as they start a new business.

Turn the Tide is told in verse, which makes it read quickly. That being said, it doesn’t explore emotions as deeply as it might have if it had been told in prose. It’s not devoid of emotion, it just doesn’t explore secondary plotlines and characters very deeply.

However, as a teaching tool, this is a great book, especially because the back matter is so complete. For teachers and parents who want to encourage their kids to consider “what’s worth fighting for,” this is a great read and resource. 4 of 5 stars.