This month we travel virtually to Alberta, the home of Premee Mohamed and also where her novella The Annual Migration of Clouds (ECW Press, September 2021) takes place. I admit to being drawn to this book because I often search for fiction about fungi, and Premee’s newest novel has some of that, along with a glimpse into the future if we continue on this route we’re on. I was so happy to be able to talk with her about her new novel. You can find more about Premee at her website and on Twitter. Waubgeshig Rice, another favorite Canadian author (Moon of the Crusted Snow), said of Clouds: “A riveting look at a dire future. The climate crisis is real, and The Annual Migration of Clouds is a must-read fiction.” 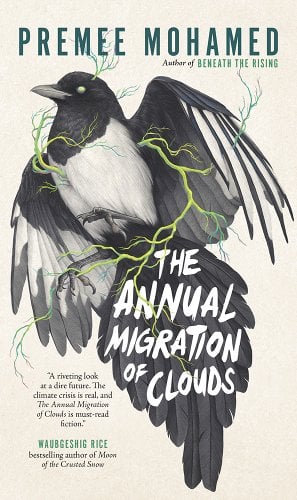 From ECW Press: The world is nothing like it once was: climate disasters have wracked the continent, causing food shortages, ending industry, and leaving little behind. Then came Cad, mysterious mind-altering fungi that invade the bodies of the now scattered citizenry. Reid, a young woman who carries this parasite, has been given a chance to get away—to move to one of the last remnants of pre-disaster society—but she can’t bring herself to abandon her mother and the community that relies on her. When she’s offered a coveted place on a dangerous and profitable mission, she jumps at the opportunity to set her family up for life, but how can Reid ask people to put their trust in her when she can’t even trust her own mind?

I found the novel unique and refreshing, written with wit and in the style of a lyrical polemic.

Mary: I see that you are in Alberta, so hello from Nova Scotia! How did you get started in writing, and did you have any favorite childhood memories of nature and/or fiction about environmental issues?

Premee: I’ve always written as a hobby. I think the earliest “book” I wrote was when I was eight or nine, using drafting supplies from my dad’s job (super-smelly alcohol markers, letraset text, etc.). I didn’t decide to get into publishing until a few years ago because I didn’t see the point of monetizing my hobby, but a friend talked me into starting with short fiction, which pays right away, and from then I started to get the idea of trying to publish longer form work. As a child, my favourite nature memories were playing in the forests around my house near the Sturgeon river; I’m sad that that area is being filled up with McMansions now. I loved Watership Down and The Wind in the Willows because they were about a nature that didn’t include humans, but I wasn’t very interested in reading about environmental issues back then. I knew from the news, from school, and from our family subscription to National Geographic that everything was in decline and the decline was accelerating, and I felt so sad about it and, unable to deal with the sadness, my response was just to try not think about it, even though it was everywhere.

Mary: What motivated you to write The Annual Migration of Clouds?

Premee: I guess I’m just one of those writers who chases an idea to completion when it comes across my head sometimes! I liked the combination of the disease and the “quiet disaster” setting. Books that are set just after disasters, or I guess post-apocalyptic fiction, are great, but that wasn’t what I wanted to write. I wanted to write about how boring and tedious and essential it is to rebuild after disaster, when the worst is generally over, and how people might do it differently based on these new constraints.

Mary: Can you give new writers a tip about world-building?

Premee: World-building doesn’t have to make perfect logical sense for our world, but it does have to make sense inside the internal logic of the story, or else readers will pick up on it right away!

Mary: Thanks for the tip! So what’s going on in the story?

Premee: In The Annual Migration of Clouds, a young woman named Reid lives and works at a university campus in Edmonton that is no longer a university, just a sturdy place to which people retreated after numerous climate disasters caused the collapse of technological society decades years ago. She’s also infected with a new incurable disease that makes her constantly on edge about whether she’s doing or thinking things or whether it’s the disease doing it—and so is her mother. When she gets a rare chance to study at one of the few remnants of pre-collapse society, at a university far in the mountains, she has to choose between leaving her mother and community or staying with them to help rebuild and work towards a better future.

Mary: One of the descriptions I’ve read called your novel hopepunk, which is a pretty new genre. It seems a lot of readers are calling for more positivity in apocalyptic climate stories. What are your thoughts on that?

Premee: I also saw that descriptor! (I would also like to add that I didn’t put it in my description of the novella, because I wasn’t entirely sure what it meant.) I do think I would like to see more hopeful post-apocalyptic (or, like this one, post-post-apocalyptic) stories. I have read a lot, like a lot a lot a lot, of hopeless dystopias and disasters scenarios, ones that assume that the worst of human nature will take over and that will be a permanent condition—that we’ll always be scratching out a subsistence living after a disaster, that everyone will become insular, territorial, and homicidal about resources and labour, that we’ll all become monsters. (I’m thinking things like Threads here.) Even just in terms of variety, I would like to see a body of literature that’s slightly hopeful, because I do think that fiction has the power to help introduce new ideas into people’s minds. If they don’t stick, that’s okay; just introducing a wide variety of possibilities is enough, especially when I hear people saying now “What’s the point, why bother? There’s nothing we can do’ about various issues.”

Mary: In times of Covid, everyone in the world is now dealing with disease on a scale that most of us have not seen before. Clouds also has a disease, a fungus, also a symbiont, however. What led you to write Cad (the disease) into the story?

Premee: Actually, I started with the disease first! I had an idea for a hereditary symbiont disease (which Cad is), and I fell pretty far down the rabbit hole of thinking about transmission, how it would affect people’s minds, their decisions to have children (or not), how people would be pinning their hopes on accurate tests so they could avoid it, how people didn’t know how to not catch it, where it came from, etc.—before thinking, “Well, with today’s technology, why wouldn’t we just cure it? That would be priority #1 if a disease like this—debilitating, painful, fatal, and equally able to affect all populations—came up.” (I should also add that I wrote this in 2019.) So the next idea was actually, “Well, what if we couldn’t.” So that led to me setting the story in a future where we had lost the ability to do advanced research and medicine, rather than in the past. And there’s no future I could imagine without climate change, so the two just got intertwined together: a plague making people less able to respond to climate change disasters, and the disasters making people less able to respond to the plague too. In Reid and her community is where everything kind of shakes out, sixty or seventy years later.

Mary: I had that kind of thought too, when Covid-19 was announced as a pandemic, that we would all have been better at curing something right now. Is there anything else that you wanted to add?

Premee: Nothing else to add! Just that I hope people enjoy the book. 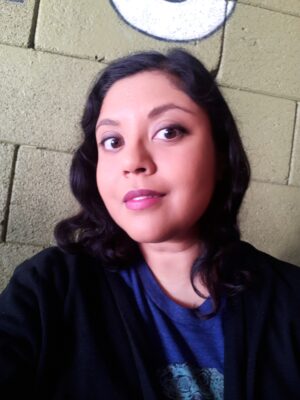 Premee Mohamed is an Indo-Caribbean scientist and speculative fiction author based in Edmonton, Alberta.

She is a Social Media Manager and Associate Editor for the short audio science fiction venue Escape Pod, and was a Capital City Press Featured Writer for 2019/2020 with the Edmonton Public Library. Her guest editing positions include novellas with Interstellar Flight Press and short fiction with Apparition Lit.

Her debut novel, Beneath the Rising was a finalist for the Crawford Award, the Aurora Award, the British Fantasy Award, and the Locus Award. Her other published books include novel A Broken Darkness and novellas These Lifeless Things, And What Can We Offer You Tonight, and The Annual Migration of Clouds. Her next novel, The Void Ascendant, is the final book in the Beneath the Rising trilogy and is due out in March 2022.

Her short fiction has appeared in print and audio venues including Analog, Escape Pod, Augur, Nightmare Magazine, Shoreline of Infinity, and PodCastle. Solicited appearances include The Deadlands, A Secret Guide to Fighting Elder Gods, and Jo Walton’s New Decameron. In 2017 she was nominated for the Pushcart Prize for her story Willing (Third Flatiron Press).

She is represented by Michael Curry of the Donald Maass Literary Agency. She can be found on Twitter and Instagram at @premeesaurus and on her website.