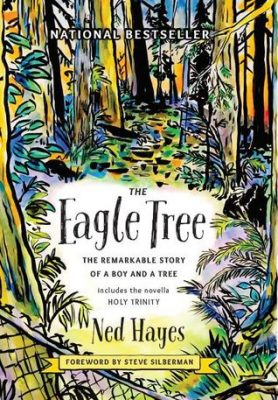 To say that fourteen-year-old March Wong loves trees is an understatement. He climbs multiple trees per day and can cite endless amount of information about trees, from information about their species to how trees work to protect the environment.

March is also autistic and struggles to understand why other people don’t care as deeply about trees as he does. He shares his wealth of tree-knowledge in order to build connections with those around him, but that information is often not met with enthusiasm or reciprocation by those around him. Every time someone fails to respond with interest to March’s tree facts, his aversion for social interactions is reinforced.

In Olympia, Washington, where March resides, there is an abundance of trees to explore. After moving to a new neighborhood, March discovers an old growth tree called The Eagle Tree, which hosts nesting bald eagles each spring. Once he sees the tree, March must climb it, even though his mother forbids it because March has a history of falling out of trees.

His mother’s caution does not dissuade March, who figures out how to get to the tree on his own. However, he discovers that the land that the tree sits on had been sold and may be developed. This news is so upsetting to March that it causes some amount of regression in the progress he has made with impulse control and behavioral modifications. That regression has the potential to impact his future, as a previous incident resulted in March being hospitalized. Due to that incident, his single-mother’s ability to care for March is being investigated by Child Protective Services, which might decide to remove March from his home.

March figures out that he can advocate for the protection of the tree and receives support to do so. This advocacy challenges him to his core, yet also provides him to opportunity to connect with other people who loves trees – and with people who don’t necessarily love trees but have their own gifts to offer if March can learn to receive them. This growth helps the child services investigation to resolve in a way that’s positive for March and his mother.

The Eagle Tree is really a devotional to trees and their importance to our planet. It is full of amazing information about trees and demonstrates a deep understanding of their foundational importance to life. While March’s story is interesting and provides a well-written opportunity to explore a neuro-atypical experience of environmental activism, the first-person point-of-view, limits the reader’s ability to get emotionally invested in the story. March doesn’t care about many people in a traditional sense, so there’s almost no character development outside of March. Everyone besides March feels very peripheral to the story, and March himself is not easy to root for because he is so analytical. There are moments of emotional growth – such as his friendship with a classmate called Stig – that are lovely, but these are too few and far between.

Additionally, there’s a fair bit of Christianity in the book. While it’s of a progressive nature and the pastor is a kind and sympathetic character, it did take up a lot of room on the page which didn’t appeal to me, as a non-Christian. Some readers may feel similarly about the sheer volume of tree facts, which the book is loaded with. Three of five stars.