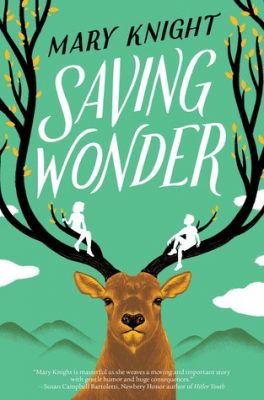 Curley Hines and his grandpa love their mountains and their way of life, even though mining accidents that happened on the mountains claimed the lives of their family members. Still, most everyone in their Kentucky town depends on coal mining for work – hard work that they are proud to do.

Then their coal mine is purchased by a big out-of-state company. At first, the locals celebrate this purchase, hopeful that it will lead to an economic boom for the region. But Curley learns that the new company won’t be mining for coal in the usual way – by tunneling. Instead they will be blasting off the top of the mountains. This method of mountaintop removal mining will destroy the mountains that rise above the house that Curley shares with his Grandpa, the mountains that he’s explored all his life, the mountains where he and his best friend Jules climb up on their favorite tree to talk while they scout for the impressive elk that roam there. It might even mean that he has to move away from the Wonderland Gap where his has lived his whole life.

Curley doesn’t know what to do. He can’t lose his home or his mountains, but the people in his town also need work. And even if Curley wanted to change things, how could he – a twelve-year-old boy – stop a whole company? Especially when that company is owned by the dad of his new friend and classmate?

Empowered by his grandpa, Curley learns that fighting for the things that matter to him – like his mountains and the elk and his and Jules’ special tree – is something that a kid can do, even a twelve-year-old. Curley and his friends embrace new technology in order to fight back against the mountaintop removal, discovering along the way that while change is always going to happen, you can sometimes affect the shape it takes.

Saving Wonder is a lovely story that immerses the reader in the setting and lives of mining families in Appalachia. The character development and relationships are strong, driving the story so that the learning that the reader needs to do in order to understand the issue of mountaintop removal coal mining does not feel intrusive. The children’s reactions to the possible loss of their mountain – especially their favorite tree – and the danger to the elk feel very believable and inspire the reader to fear alongside them that their way of life is going to be destroyed. As a reader, I cheered for their children as they discovered their inner activists, sitting in their tree like Julia Butterfly Hill and employing modern techniques like creating a viral video to help raise awareness of the issue.

The one part that I didn’t enjoy as a reader was the introduction of new vocabulary words at the beginning of each chapter. While it does demonstrate the way that Curley’s grandpa supports his learning, it ended up feeling forced and didactic, and often takes away from the flow of an otherwise well-told story.

Overall, however, this is a great book that demonstrates the connection that people feel to the place that they live and the lengths that they will go to in order to protect it. Four out of five stars.