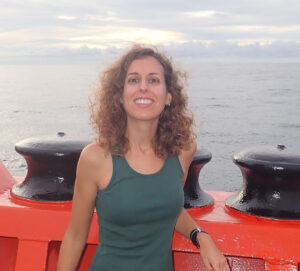 It was my pleasure to talk with Indie Corner spotlight author Neus Figueras, who was born in Barcelona and grew up in a small village among the vineyards of the Penedès region. If she wasn’t running through the streets or the open fields, she would be sitting down to read the books she borrowed from the mobile library or those she bought with a friend. As a child, she loved to write and was good at it. She won six local and regional literary contests. Her insatiable curiosity and passion for nature took her to the University of Las Palmas de Gran Canaria to study Marine Science. There, she put on her first diving mask and fell in love with the ocean. She finished her degree with an excellent qualification, and her teachers and classmates expected her to do well academically, but Neus devoted herself to circus arts to make people smile. This job allowed her to lead a nomadic lifestyle and see different social realities, which made her grow as a person. But science called her back, and she went to the coast of the Spanish Levant to collaborate in a project on jellyfish. In the research station where she lived and worked, she further strengthened her connection with nature and it was there where she discovered that her vocation was to protect it. With this purpose in mind, she took a Master in Marine Biodiversity and Conservation, an international program between the Universities of Bremen, Ghent, and Algarve, and the Galway-Mayo Institute of Technology. Since then, she has collaborated with the University of Salento to restore marine ecosystems, worked as a marine scientist at the Institute of Marine Sciences in Barcelona and on the Research Vessel Hespérides, conducted marine ecology studies in Scotland to promote the sustainable consumption of algae, and led her own project on corals in Myanmar.

Here we talk about her novel Lorac. Lorac didn’t set out to be the voice of the ocean, but when the future is at stake, being a hero is the only choice. Lorac, the youngest of a family of sea nomads, suffers a series of unfortunate events and has to seek refuge in the heart of the sea. The transition isn’t easy, and unexpected difficulties arise. But helped by his new friend Zoe, Lorac joins a family of centenarian creatures and discovers the secrets of the coral reef―his real home. A threat that affects the marine world, however, makes him depart to the place he once knew and now knows no more, in a daring mission to save the ocean―and the planet. Lorac will have to make difficult decisions, live in worlds where he doesn’t belong, and prove his worth for the good of all. Science and fantasy come together in an adventure of hope and courage that transmits an important message to protect our environment. Mary: Tell us about yourself–your life so far and how you got started in writing. Have you published anything before Lorac?

Neus: I started writing at an early age because I am a highly sensitive person and crafting stories helps me to project the great amount of stimulus I perceived from my surroundings―and as I grew up, from the world. I remember that I wrote my first “unofficial” novel at the age of ten and that my friends begged me to tell them stories that I improvised as I went along (yes, we grew up without mobile phones).

Since then, I took several courses in creative writing, won six local and regional literary contests, and only stopped writing when I went to the Canary Islands to study Marine Sciences. I must admit that it was difficult to choose science over the humanities, but my insatiable curiosity and passion for nature won out and I knew that I could always continue my career as a writer on my own.

To be honest, my scientific career has helped me as a writer because writers tell truths for the world and science has allowed me to know our world on another level.

Lorac is my first novel and before it, I have written countless short stories and one novelette.

Neus: The story follows the life of Lorac, which begins with the traditional way of living of an indigenous community of sea nomads―I personally met them while I was restoring coral reefs in Myanmar. Then, Lorac suffers a series of unfortunate events and has to seek refuge in the heart of the sea along with his new friend Zoe, the book’s most fantasy character although “she” actually exists. Finally, climate change and pollution come into play, sending Lorac out into our world on a mission to restore the balance of his true home, the ocean.

It is recommended for adults and teens 11+ as it deals with the value of family and friendship, death, growing up, and global Earth issues. But, as anything related to art, nothing is rigid, and so far, I’ve heard of an 8-year-old girl who devours books and read Lorac in two days, and of a retired man who loves historical literature but gave Lorac a try and got him so hooked that he read it in one sitting.

Neus: It has very interesting information about marine life, deals with how over time our impacts on the ocean have increased, especially due to climate change, pollution, and overfishing, and shows what we need to do to reverse this.

I was inspired to write about them because working with coral reefs I was in the front line of climate change. Our reefs are projected to be lost almost completely at 2ºC warming, a threshold that will be reached within the lifetimes of many of us unless there is more global action on climate change.

Therefore, I wanted to create a story that would convey in an exciting and clear way the need to conserve our planet. For the first time in my life, I wrote not because I needed to, but because it was necessary. Everyone’s contribution, however small, is vital to maintaining the planet that sustains us―a message that the book supports in a positive and inspiring way.

Neus: Yes, I have done many, until we had to stop because of the coronavirus, but I kept doing online events.

I believe that marketing is difficult with and without the coronavirus. I am much better and I prefer to write, but for Lorac I make the effort to do marketing because I invest all the benefits of the book into spreading its important message.

The most commons reactions Lorac has from its readers is that they can relate to the characters and feel the need to protect our environment. Some even have gone “Wow!” and laughed with the bantering parts of the dialogue―it has even managed to keep the attention of one reader who is not into sea-based books. Others think it could make a nice animated movie, and many point out how it highlights the issues around ocean conservation in a impactful and empowering way.

Personally, I have seen Lorac succeed in changing the attitude towards the environment of people who, after several years of trying, I thought they would never change.

Neus: I’m editing a novelette I wrote some time ago, and I’m “baking” the structure (so I haven’t started yet, and I’ll just do it if it turns out the way I hope it will) of a story that will use some “seeds” I scattered in Lorac to create a sequel: a second book whose background will be about how biodiversity loss makes us more susceptible to pandemics.

We are also translating Lorac into French and Portuguese (it is currently available in Spanish and English).

Mary: This all sounds so incredibly cool. Thanks, Neus!