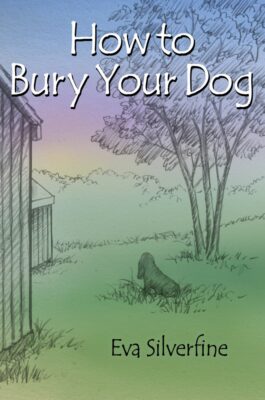 Lizzy has been leading an insulated life: she tends her adopted strays and goes to work at the blood lab, but she has forsaken lifelong pastimes and declines invitations from old friends. On the day she buries Happy, the abandoned basset hound she adopted years before, she learns a real estate developer is threatening the heart of her rural community—a tranquil pond and a relict stand of hemlocks. For Lizzy this is a magical place, hidden from the modern world.

Coaxed by an old friend to join a group fighting the development, Lizzy is reluctant—she wants to avoid both hope and him. But she realizes she can no longer keep the outside world at bay. As the battle over the development unfolds, and the dynamics among Lizzy’s remaining pets shift, she opens herself to two young neighbors who share her love of the natural environment—an awkward sixteen-year-old and an inquisitive ten-year-old. And as Happy’s elements return to the earth, buried memories find their way to the surface in increasingly curious ways.

Lizzy had wandered toward the pond herself that morning after a restless night. Her mind had been full of the day’s trip, which overall had been predictable and therefore frustrating. She took her usual route through the woods to the bluff. A bird called relentlessly—she recognized its song, but she couldn’t remember its name, even though Wes had told her so many times. She had never tried very hard to remember because its name was not important to her. She didn’t need to name the bird to be reassured by its call, to be reassured by knowing it was there and living the life it was supposed to live, to be reassured there was a world much bigger than herself. It was in knowing there was a world bigger than her own life that she typically found comfort, but this morning she was experiencing the other side: that she was too small to affect the course of events unfolding in her own backyard.

As Lizzy approached the bluff, she saw the sourwoods were in flower—racemes of dainty white urns were calling in the honeybees. She walked to the edge of the bluff and looked over the hemlocks standing firm on their perilous slope.

Even if she hadn’t known the hemlocks were relicts of another era, the bluff had always seemed an ancient place, a magical place, hidden from the modern world. An earthy scent emanated from the ground—humus and moss overlain with the sweet aromatic sheath of shed hemlock needles and branchlets. She loved the hemlocks—their form, their scent, their flat, dark green leaves. She was grateful they had remained here, a reminder of a long history before her, of history before humankind. She was comforted by this continuity, this sense of something greater than the here and now, something that lived on without her but gave her grounding in her time. There was nothing more primal or more transcendent than these seemingly fleeting moments of connection.

In some sense, weren’t most species relicts of an earlier time? Didn’t they all carry pieces of the past in their DNA—millions of years of history and change? Then, during the course of one day, the creek is no longer a creek and everything that lived there is gone—unless it could outrun a bulldozer. Saved for a day. But where to go? Once gone, a history was just that—history in a museum, in a painting, in a memory.

Lizzy walked along the edge of the bluff, toward its high eastern edge below which Mill Pond Creek continued its southern path. She glanced in the direction of the cemetery; she couldn’t see it through the leaves. The dead abide in the memory, their lives history. Our walk is so brief, thought Lizzy, our footprint so transitory. But hell, there are so many of us now, our footprints amount to a stampede, a permanent scar.