There’s something about looking up at the night sky and trying to find some sort of meaning beyond all the magic and beauty. We might become transfixed for hours at both the light and dark parts of the night sky. Astronomers continue, at an exponentially faster rate, to discover new facets about space. But fiction authors may also discover new things, like the kind of imaginaries that connect environment to experience, while intersecting art and science or humanity and nature. This world eco-fiction series looks at the ways writers make these connections, and this month I’m happy to talk with the author of Dark Constellations (Soho Press), Pola Oloixarac.

Dark constellations were the way the Incas named and organized their astronomic exploration of the night sky. In the southern hemisphere, unlike the North, the dark spaces between the stars are much wider: interestingly, the Incas built their characters and stories as written inside the dark spaces, and not around the lights dots of the stars like the Western tradition. -Pola Oloixarac

Translated by Roy Kesey, Dark Constellations is a slim science-fiction novel set mostly in Argentina that has its feet in biological exploration and its eyes in the future—to hacking and DNA research. Dark, mysterious, and surreal, the story has three main characters whose works connect with each other over the course of 150 years. Vivid images of the jungle as well as human-plant hybrids also fill the story.

It’s exciting to virtually travel back to the southern hemisphere, where this series actually began when it branched out from the previous climate-change spotlights from years ago; the first of the world lit series began when I talked with Fábio Fernandes, who translated Solarpunk: Ecological and Fantastical Stories in a Sustainable World. Then, we traveled to Brazil (and Portugal), but today we look at a great story set mostly in Argentina. Dark Constellations rates in my top reads in 2021, and I am happy to end out the year talking with the author. I think readers will agree with me that the cover is beautiful. 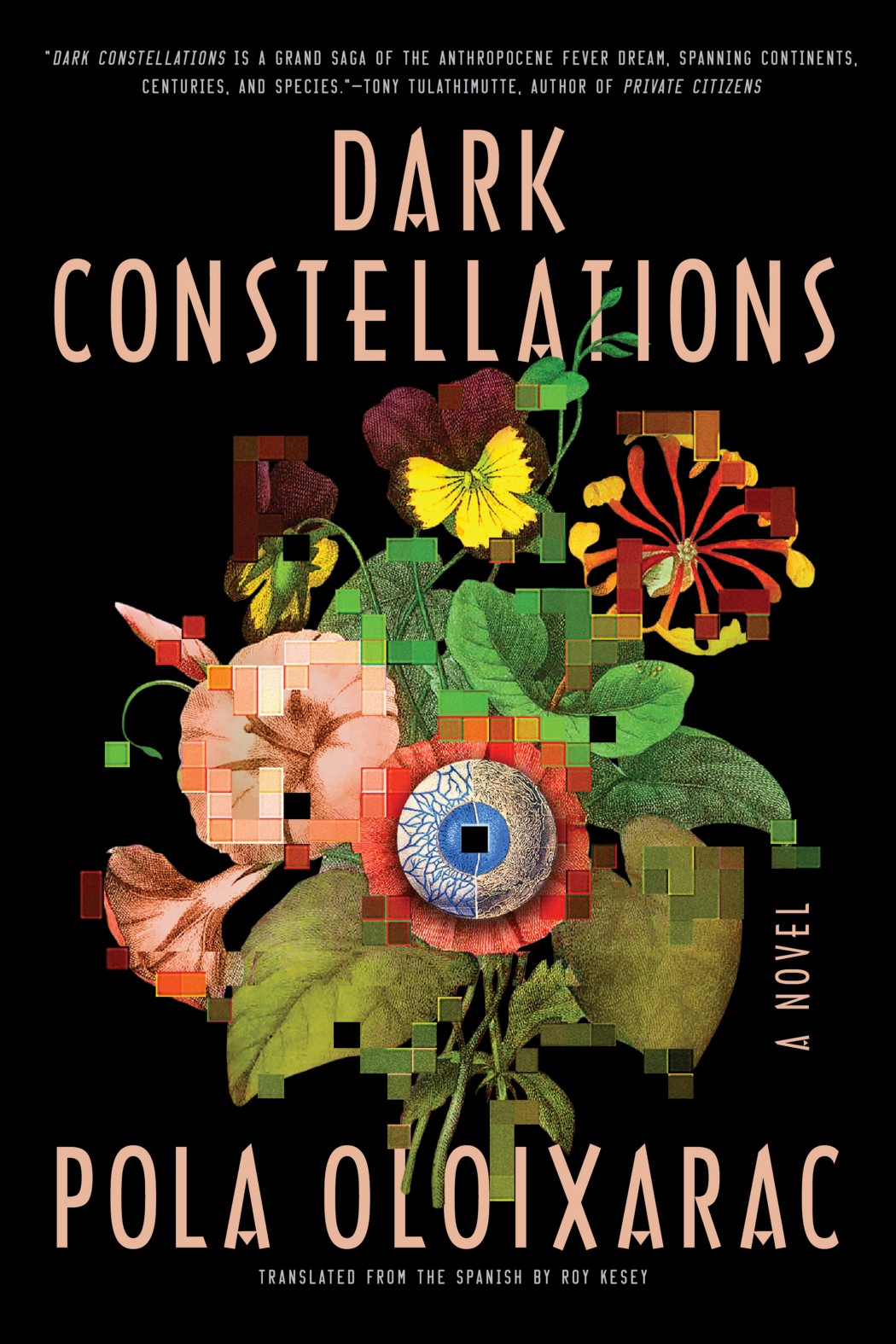 Mary: I was drawn to Dark Constellations a couple years ago and finally got a chance to read it recently. It’s intriguing and full of knowledge, which made me think that you are a wise author! How did you imagine and research this novel?

Pola: I’m glad you enjoyed it. I love playing with knowledge, because I find it very playful in a way. Science, and the things we take for granted as when we “know something,” are also a deep tissue made of stories. Many times, it really depends of fortuitous factors for certain stories to become more real than others, and to turn into validated science. Science and knowledge must undergo a lot of storytelling to actually make it into the books of the genre science. I find this process very inspiring, and with Dark Constellations I wanted to imagine a side story that didn’t make it into the big books, where species were organized differently, like an alternative dark history of science of the South. I love working in libraries, which tend to be very helpful if you want to write in this vein: the libraries become your vessel and the books find their way into your book.

Mary: You were born in Argentina, which made me wonder when I was reading the novel, do you have great memories of viewing constellations, or the dark places between, when you were growing up? Can you briefly describe what dark constellations are?

Pola: Dark constellations were the way the Incas named and organized their astronomic exploration of the night sky. In the southern hemisphere, unlike the North, the dark spaces between the stars are much wider: interestingly, the Incas built their characters and stories as written inside the dark spaces, and not around the lights dots of the stars like the Western tradition. For the Incas, what others saw as noise (simple darkness) was in fact information. All their figures are constructed as shapes in the dark, in a complete departure of what’s form and what’s content, what’s information and what’s noise, if we are to compare it to the Western European tradition.

Mary: There are three timelines, starting in the 1800s, then forwarding to the 1980s and then to 2084. Each story is intriguing. Can you tell our readers how they are connected?

Pola: One is the story of Cassio, a young hacker in the South, between Brazil and Argentina. His story is a bit of a sentimental biography of the Internet, the different moments of its development until the present day, with crypto. He begins making hacks to video games, then on the BBS (the precursor of chatrooms), and he discovers his power making viruses. He joins a company that is putting together banks of DNA and mining them. Niklas Bruun is an explorer working in the 19th century to define new species of orchids, and he travels from the Famara crates of the Canary Islands to Brazil, where he joins a strange cult of men led by a rat who makes experiments cross-pollinating women and orchids. In the DNA mining company Cassio meets an female engineer Piera, and together they will hark his hacking powers to break the surveillance state they live in. What unites these stories is how they’re all looking at humankind as a something in between species; they’re all working on the edges of when becomes becomes unhuman and vice-versa.

Mary: I’ve interviewed a lot of authors who deal with, in some way, ecology in fiction. It’s fascinating to see how writers approach it differently. Being a fan of strong imagery of nature and how we connect to it made me appreciate your novel. Also, knowing that the ecological aspects of our world are not always set apart as simply “nature” but as inherent in us all, in your novel, was appealing. It showed a lot of inter-connectedness between humans and other objects we might call wild. What are your thoughts on this?

Pola: It’s interesting that you mention that because what drove me to write this novel was showing the intimacy between the realms of the humans and the orchids, insects, fungus, and the informatic viruses that populate the novel. It’s a book about symbiosis. I wanted to write about humans who are becoming something else, and about plants and animals that are also undetermined in they capabilities—where possibilities of evolution are actually open and brimming with life. And the people who are witnessing this are feeling it too. All life is semiotic, and all life is making language, so I wanted to make a book sensitive to that.

Mary: It works so well. This intersection between information and biology, again, is fascinating. I recall the 80s clearly and might have met many similar characters (like Cassio), so there is a comfort zone in reading about that time period—but of course, he is very different, a genius hacker who is interested in surveillance as well as control. What inspired you to create Cassio and his peers?

Pola: For a while I fantasized about writing a book on the hackers I met in my youth in Buenos Aires. Most of the characters are drawn after my friends or real people I’ve met. There was something about Cassio that attracted me particularly, that his quest of knowledge was always haunted by darkness. I’ve met all these people who “worked for the Evil side” or were white hats (the good side), and this intrigued me immensely. (White hats and black hats are common terminology in the hacker world.) There’s an esthetic pleasure in hacking, not just for the material outcome of it; if you’re just going for the material, that would make you a common thief with a computer. But Cassio is not a hacker of that sort, he’s more interested in getting hands on in a kind of hacking closer to the sublime.

Mary: You recently published Mona. Can you tell us something about that book as well?

Pola: Mona follows the eponymous character Mona, a young female writer from Peru, who travels to a resort in Sweden to participate in a literary festival. The book is both a comedy and a horror story set in the world lit scenario, or the contemporary international circuit of literature. Mona is running away from something horrifying, and they key to her secret lies in her body.

Pola Oloixarac was born in Buenos Aires in 1977. She studied philosophy at the University of Buenos Aires. She has written three novels, which have all been translated into English. In 2010, she was chosen as one of Granta’s Best Young Spanish Novelists. In the same year, she was invited to participate in the International Writing Program at the University of Iowa. She is the recipient of a literary award from the Fondo Nacional de las Artes. She studied philosophy at the University of Buenos Aires and has contributed articles for various publications such as The New York Times, The Telegraph, Rolling Stone, Folha de Sao Paulo, Revista Clarín, Etiqueta Negra, Quimera, Brando, América Economía, among other media. She’s a founding editor of The Buenos Aires Review bilingual journal featuring contemporary literature in the Americas.