We’ll end the crazy year of 2020 on a positive note, with a look at the lyrical novel Fauna by Christiane Vadnais. Here, we travel to the Arctic Circle (as indicated by Ursus maritimus), but the novel’s setting is fictional and inspired by places more than it is specifically set anywhere on the map. In my reading, I felt as though I was teleported to a futuristic forest somewhere in northwestern Europe’s Arctic Circle. The author tells me that she was inspired by the atmospheric forests in the Québec province, near the American border. If anything, Fauna invokes a wild imagination, and the reader will find themselves anywhere that drips with cold water beneath a wild and dark canopy of trees.

Originally published in French, Fauna was translated to English this year by Pablo Strauss. It is Christiane Vadnais’s first work of fiction and won the Horizons Imaginaires speculative fiction award, the City of Quebec book award, and was named one of 2018’s best books by Radio-Canada. From the publisher:

A thick fog rolls in over Shivering Heights. The river overflows, the sky is streaked with toxic green, parasites proliferate in torrential rains and once safely classified species—humans included—are evolving and behaving in unprecedented ways. Against this poetically hostile backdrop, a biologist, Laura, fights to understand the nature and scope of the changes transforming her own body and the world around her. Ten lush and bracing linked climate fictions depict a world gorgeous and terrifying in its likeness to our own. 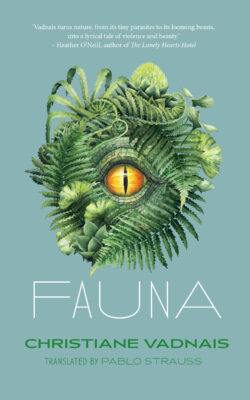 Mary: Before and after Fauna, what has your life been like?

Christiane: What Fauna changed for me is the way I approach writing. The freedom, the recklessness I felt while writing my first book—not knowing if it would be published—have been replaced by a more conscious work. I demand more from myself. Every day, I sit at my desk with both the desire to understand this weird thing that we do, telling stories, and the feeling that it’s really mysterious. I have a lot to learn about my art, I am at the beginning of a journey: it’s challenging but exciting.

Mary: I opened Fauna and didn’t stop reading until the end. It’s that addictive. What led you to write this novel?

Christiane: The idea came from an article I read about dreams. I am fascinated by their symbolic logic and the way they make us see things differently. The article said that neuroscientists, when they study it, find a lot of people still dreaming about wild animals, about being chased, etc. It seemed strange to me: how can we dream about this, considering that most of us have never seen a bear outside a zoo? Could that be a reminiscence of our animality, a primitive signal sent by our brain to tell us that we are cut from our own materiality? The poetry I saw in this thought inspired me. I wrote what became the first page of Fauna. The book is inhabited by this dreamlike spirit, by a wild imagery, by a desire to be connected with our animal instincts in a positive way.

Mary: That’s pretty fascinating. Can you talk some about your thoughts and direction when writing this book? What were your intentions for reader impact?

Christiane: I wanted to make the reader feel how beautiful and powerful and vivid nature is, even in its darkest moments. For a long time now, we—humans—separated ourselves from nature, thinking that we will always find a way to control it. But we are part of it, for the better and the worst. To see it, we don’t have to look far: just see how pregnancy can take over our body, how a parasite can make its nest in our belly, or how we have to manage snowstorms and floods. We are living an ecological crisis due to our arrogance and violence against other species, so I think we need to remember that: we are not everything. We are part of a bigger system, of something powerful and magic. To dilute our ego is a key to engage our civilization in a better relationship with our environment. We should always care about sensitive beings, not because they are pretty or useful but because we share a frail balance, a unique world. That said, I didn’t want to write a political book, but something intimate, poetic, where not only humans would have their place, but also animals and insects and forests. They are all characters in the book.

Mary: I thought Fauna was a unique approach to life in a weird, climate-changing future. What is it about eco-horror that appeals to you?

Christiane: Literature is always written from a particular place and time, and writing about nature today is unfortunately writing from a terrible ecocide. To be honest, I wasn’t conscious I was writing eco-horror while doing it. It came naturally, because this is the world we live in, and also because of this primitive imagery I talked about.

An important motive that links Fauna to the genre of horror is hunger. In the book, bears are hungry, Heather is hungry, Cathy’s mom eats her rabbits… Every life kills another to survive: if this is natural to animals, when it comes to humans, it turns into violence. Their appetite to consume others, to consume the earth, has no end. Since I have been a vegetarian for many years now, this is a striking image for me.

Mary: It’s interesting to see a biologist featured in these short, connected stories. In fact, a few of my colleagues have expressed interest in Laura’s role in the story. What inspired this character?

Christiane: Science is at the same time a figure of progress and a figure of domination. I find this fascinating about it. It’s the tool we use to injure the Earth (to dig for oil, for example) and the environmental knowledge we need to follow if we want to solve the ecological crisis. I wanted Laura to be solar, to represent the “caring” side of science, but at the same time to embody its failures. Laura’s science is unable to save humanity as we know it. But she tries, and tries, and tries, and shows curiosity for the new forms of life emerging. Laura is a character driven by an intellectual quest, and that’s what I find interesting about her.

Mary: Is Shivering Heights and its environment inspired by any particular place? Have you been there?

Christiane: While I was writing “Diluvium,” the first story, I wanted to create an ambiance of “noir” movie. I thought about the south of Québec province, near the American border, with its dark forests (which inspired a lot of Québec crime writers), and built the world of Shivering Heights from there. I also put in it a great deal of my love for gothic literature and atmospheric movies.

Christiane: I am writing a novella for a collective project, inspired by the French genre of “merveilleux scientifique” (“scientific marvel”) and, at the same time, another dark eco-fiction (I can’t help it!).

Mary: Oh, sounds interesting, so I will be following that! Thanks so much, Christiane, for your time and insightful thoughts about your novel.

Christiane Vadnais was born in 1986 in Quebec City. Before publishing her critically acclaimed first novel, Faunes, she worked for years in the literary community as an events programmer and project manager. Faunes, a collection of linked stories, is set in a post-climate-change future where humans struggle with a mysterious epidemic while other species adapt and proliferate. The book won the Horizons Imaginaires speculative fiction award, the City of Quebec book award, and was named one of 2018’s best books by Radio-Canada. The Spanish translation has been published by Volcano Libros and the English translation by Coach House Books.