I’m surprised at the few negative reviews I’ve read of Don’t Look Up, a movie written, produced, and directed by Adam McKay. I was determined to watch the movie with an open mind, just like I do everything else, so disregarded such reviews. Also, while the movie is critiqued more harshly on Rotten Tomatoes and Metacritic, it has a good IMDb rating and a positive 84% rating by Google users.

In the movie, a 9km-wide comet is on a near-100% collision course with Earth, and most people don’t take it seriously, despite scientists converging on the consensus that it’s happening. They have seen it, photographed it, proven it with data and math, and so on, yet it’s just another truth wherein you would think common sense would prevail but does not. The comet becomes politically divisive, and its dangerous reality becomes warped by fake news and misinformation, scattering the actuality of the comet into hundreds of wayward motes—distorted truths denying the reality of the comet, which is a reflection of how we react to such crises in today’s world. When there’s danger surrounding us, many people can’t imagine it properly, especially if it seems inconvenient, profitable, or a conduit to fame.

What’s not to love about Don’t Look Up? The all-star cast is great to see together, the performances cogent and diverse. It’s the first time I’ve ever seen Leonardo DiCaprio as a dorky type, and he pulled it off well. Jennifer Lawrence slips convincingly into the role of a student who discovers the comet and has to deal with disbelief. Rob Morgan is always a delight, his confidence persuasive as a NASA scientist. Jonah Hill has been a favorite of mine since, well, Superbad. Mark Rylance played the perfect billionaire cultish type of a wannabe prophet. If that weren’t enough, there’s also Tyler Perry, Timothée Chalamet, Ron Perlman, Ariana Grande, Scott Mescudi, Himesh Patel, Melanie Lynskey, Michael Chiklis, Tomer Sisley, Paul Guilfoyle, Robert Joy, Cate Blanchett, and Meryl Streep, all of whom depict the wide array of iconic personalities dictating mindsets of similar crises, such as Covid-19 and climate change. These characters—the scientists nobody listens to, even though you know damn well that we should; a macho military superhero; ignored children; a president who puts profit above common sense; her son who’s reminiscent of Donald Trump Jr. and nepotism; reporters worried about ratings more than content with integrity; youth calling for common sense to return; everyone finding a reason to party; and so on—mirror us. It’s important to view this movie honestly so that we can recognize the abundance of emotions involved with our havoc wreaked on the planet. Whatever our reactions to the movie, I think the engagement and ability to laugh at ourselves will inspire conversation and collective action to fix things we’ve messed up. Don’t Look Up’s commentary is that there’s a big thing that will destroy life on the planet and we have to get out of our comfort zones and addictive screens, and open our eyes to it.

Remember Octavia Butler’s prescient novel Parable of the Sower (published long before Twitter came around), when a bulleted note about war and a comment about Christmas lights might carry the same weight in 25 words or less? Butler foresaw this, and it’s already common that a celebrity posting an ordinary facet of their day is far more popular and engaging than meaningful information from someone less noticeable. That’s in the movie too, as everyone sees pictures of the comet coming, and then later views the comet itself in the night sky, yet gets completely sidetracked by less important news, such as two big-time singers, played by Scott Mescudi and Ariana Grande, and their ongoing love drama. The main scientists, Kate and Dr. Mindy (Lawrence and DiCaprio), are ignored by the White House and go to the media to try to warn everyone of what’s happening. Hardly anyone takes them seriously. They simply become caricatures for others to Photoshop and go viral with. 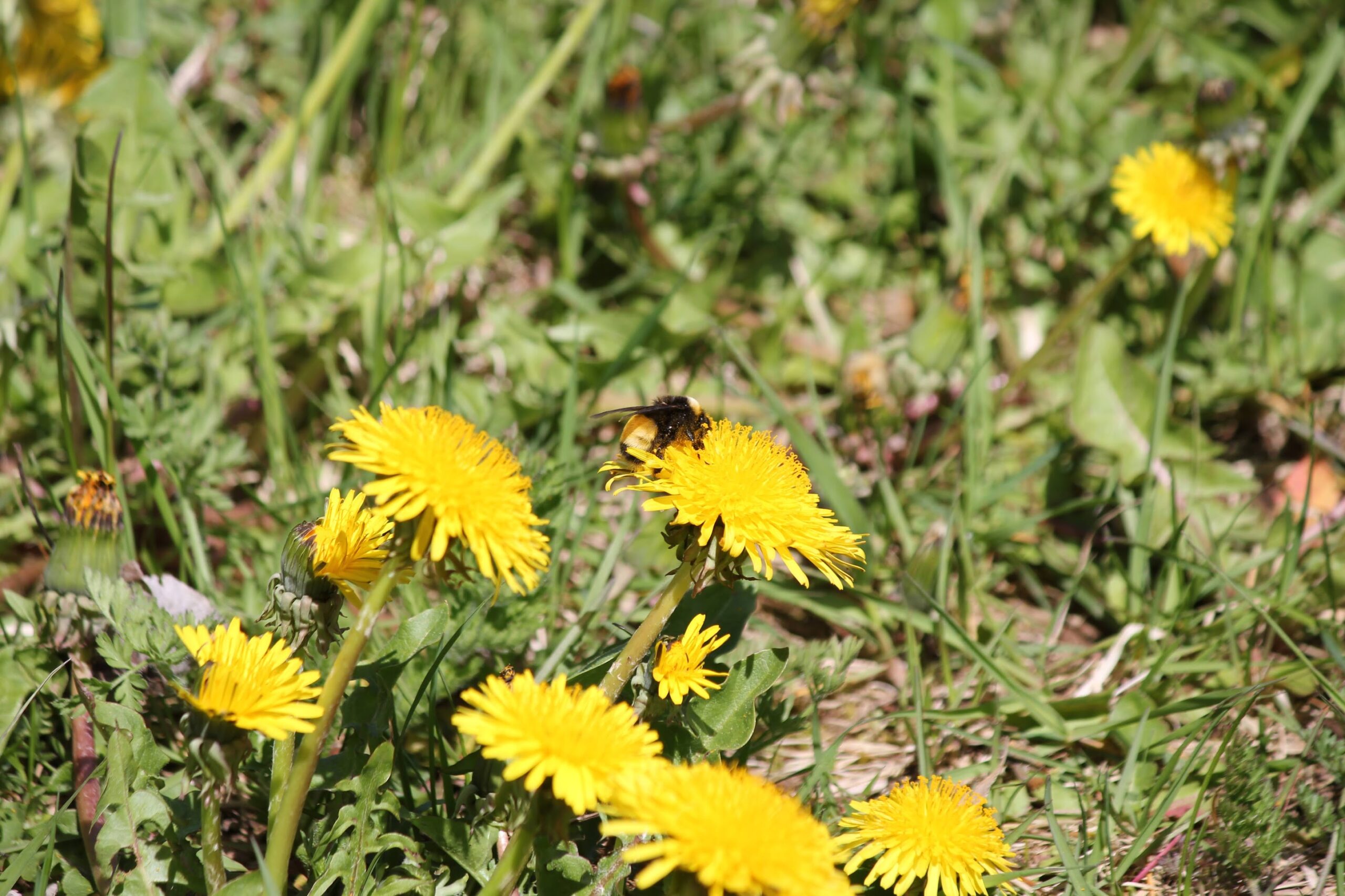 Bumblebee in our meadow. Photo taken by Morgan Woodbury.

At times, the utter chaos and distractions in the eye of the storm are interrupted by scenes of animals in the wild. I have to admit these parts choked me up. We humans seem utterly entitled and overly concerned with ourselves and how big we can get, whether it’s attaching ourselves to an idea and trying to get a lot of likes or simply joining an echo chamber where whoever we side with will just repeat shared terminology and ideas; when these ideas are based in science and observation, okay, but what if these ideas are distorted, misrepresented, and outright lied about? The latter has become political theater in recent years and absolutely happening, motivated by greed and self-inflation. That’s what Don’t Look Up is about. It’s a parody of the way we ignore reality and continue to look at life via filters and screens. Meanwhile, the actual world out there has 8.7 million other species of plants and animals, which are directly impacted by our failure to look up and away from our own interests. The scenes in the movie depicting beautiful animals interacting with each other, unaware of the pending disaster and human folderol surrounding it, are entirely impactful and heart-wrenching. This movie is a wake-up call. No superheroes can fix human indifference. Only we can.

Don’t Look Up tells us to do look up and see the world outside our windows beyond the social infrastructure that, as of late, has weighed us down in lies, greed, and distractions. The movie reminds us that we are part of a bigger world, where other lives are as meaningful as our own and need more attention as we resource-grab everything and ruin habitats and ecosystems.

This movie is an example of what I believe will be more and more realistic-facing movies about hyperobjects like climate change (weirdly, McKay’s production company is called Hyperobject Industries; he also was the executive producer of the excellent Q: Into the Storm, a social documentary about the people involved in QAnon). Already, in the literary world of fiction, authors have taken on ecological subjects by the hundreds. I hope the trend continues in the film industry as well. Recently there have been movies like Silent Night, a dark comedy about disaster caused by poisonous clouds resulting from climate change; the remake of Dune—an example of eco-fiction (Tor); and the deadpan comedy The Dead Don’t Die. You can find more ecologically oriented movies here. I’m also looking forward to adaptions to screen like Octavia Butler’s Parable of the Sower, NK Jemisin’s The Broken Earth trilogy, and Charlotte McConaghy’s Migrations (all in various stages of development).

The featured image of a polar bear holding an umbrella in a bottled water company is a screen grab from the movie Don’t Look Up, on Netflix. The close-up photo of a bumblebee on a dandelion was taken by Morgan Woodbury, in our meadow.