Note that I decided to rename this series “Backyard Wildlife” due to my original plans of getting out more into the province being squelched because of the coronavirus. Nova Scotia is really careful about things opening, more so than the United States. Nova Scotia has had, as of today, 1,066 Covid-19 cases and 63 deaths. While things have been starting to open up, it’s been slow and with careful review. We still wear masks when we do go out, and we try to go out only once a week, though sometimes it’s more as we are doing special projects around the house to ensure simple things like having heat and being able to cook during future power outages and hurricanes, which aren’t a matter of if but when they will happen. Our solar panels are in progress. We’re waiting on a part from the US that is taking up to eight weeks to get here before the guys can finish the job. Our newest project is getting a wood stove installed, and the installers will do an initial review of how to pipe out the chimney so as not to shade any solar panels. They’re coming Tuesday, so this weekend we cleaned off the living room and dining room walls, and will paint tomorrow. These projects call for things like goggles, masking tape, TSP, paint, rollers, and all that good stuff.

Then the other iffy thing about traveling around the province is that despite the nearest municipality offering wonderful incentives for residents to install solar panels, there’s very little in the way of actual chargers for our electric car. We can only go about 125 km before needing to charge. I just joined the FLO network, however, so hopefully we’ll find more resources. After interviewing Missy Volker in Dragonfly’s world ecofiction series, I was sure that once I moved to the eastern coast, I’d at least want to try stand-up paddleboarding if not surfing again. But the ocean, there and back again, is just out of range. Maybe next summer!

So here we are, settling in to a new place as the world becomes both weird and scary yet also more hopeful, considering the revolutions against exclusionary white establishments and narratives right now. I figure when or if we ever can travel out to the province more, the idea of backyard wildlife will be just as good a title because Nova Scotia is starting to feel more and more like home, and my entire backyard.

Tonight’s fog, which later evolved into an intense rainfall

But moving here has been both exciting and moody and sometimes somber, especially in the early days when I was here by myself and worried I had contacted Covid-19 during my travels. There were days of endless snow, a sense of isolation and beauty, which strangely I enjoyed. I often walked the frozen gardens, where I knew someday the roses and who knows what else out there would flourish. Given I moved 2,100 km the day after the pandemic was announced, I have an easy time thinking of everything before now as a different lifetime. The reality these days is so different from before. Being close to nature, with the dividing wall between us being a simple screen, as is now, when I write to a foggy evening settling in and cool winds blowing across my face, is even more distinct than it ever was before, even back when I hiked and ran the trails of British Columbia. I still returned to a highly urban setting, where traffic and noises were everywhere. Now I hear the trees rustle, as we are expected to get some rainfall from tropical storm Fay–which moved more inland than expected–and another weather system along the Maritimes. We are not getting as much rain as previously thought, though Wednesday was huge with rain. Since then there has been a lot of humidity and tonight some fog, along with the occasional rainfall. This is wonderful for our new trees and all the other flora and fauna in the yard, so I’m not complaining, for otherwise we’ve had less rainfall than usual and even had a fire ban for a while.

Everything I observe around me–all the birds singing, the flowers scenting, the shades of white, pink, purple, orange, red, yellow, blue, and green–explodes in color and breeze and sweet bird calls and  angry ones. This all happens beneath the constantly changing moody sky, which enhances it all. 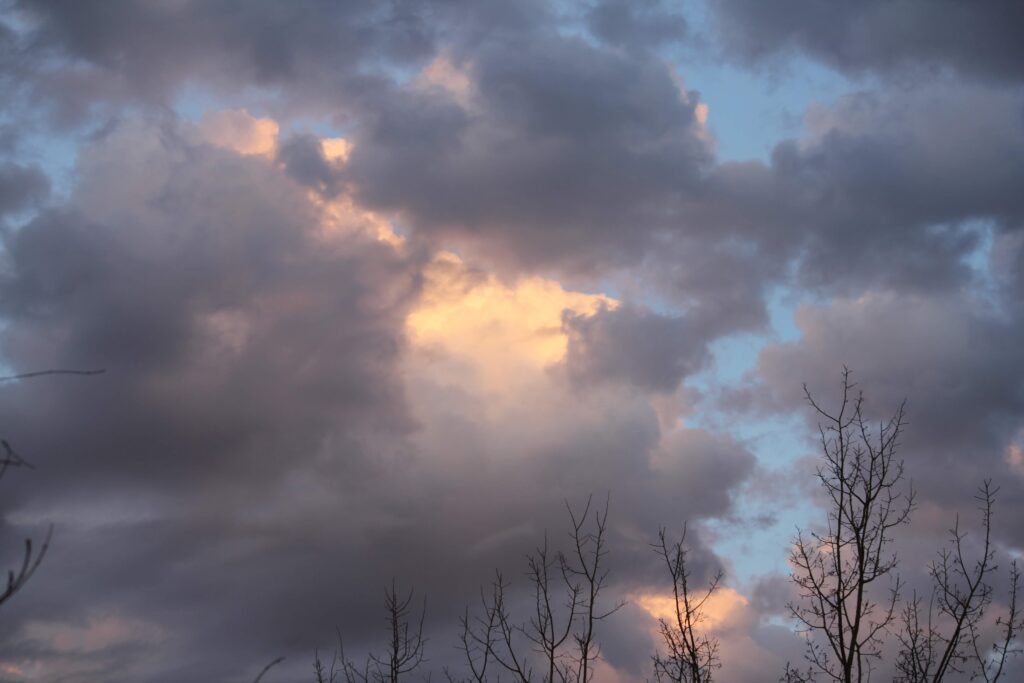 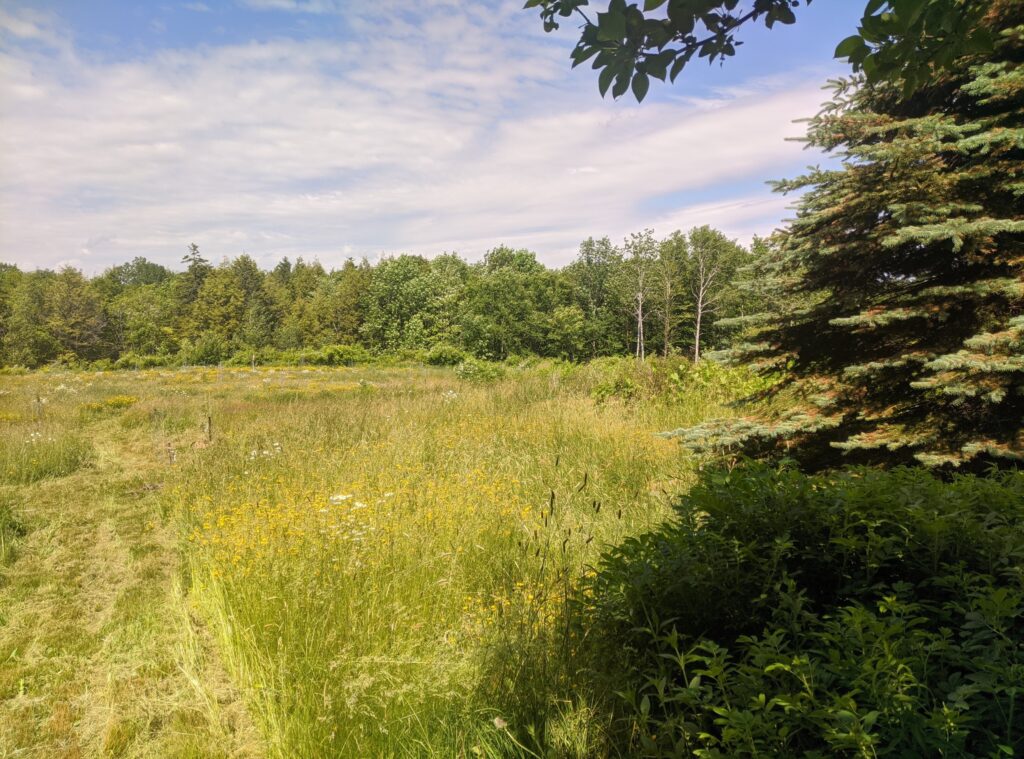 A pathway mowed so it’s easier to get back to water the new trees. 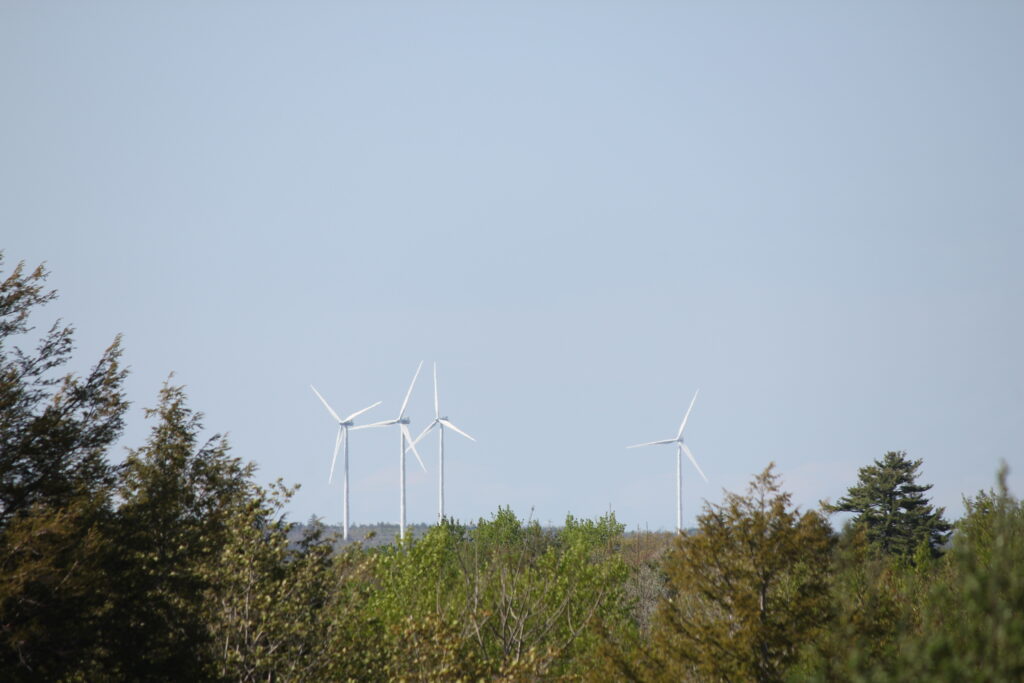 On clear days we can view windmills to the northwest 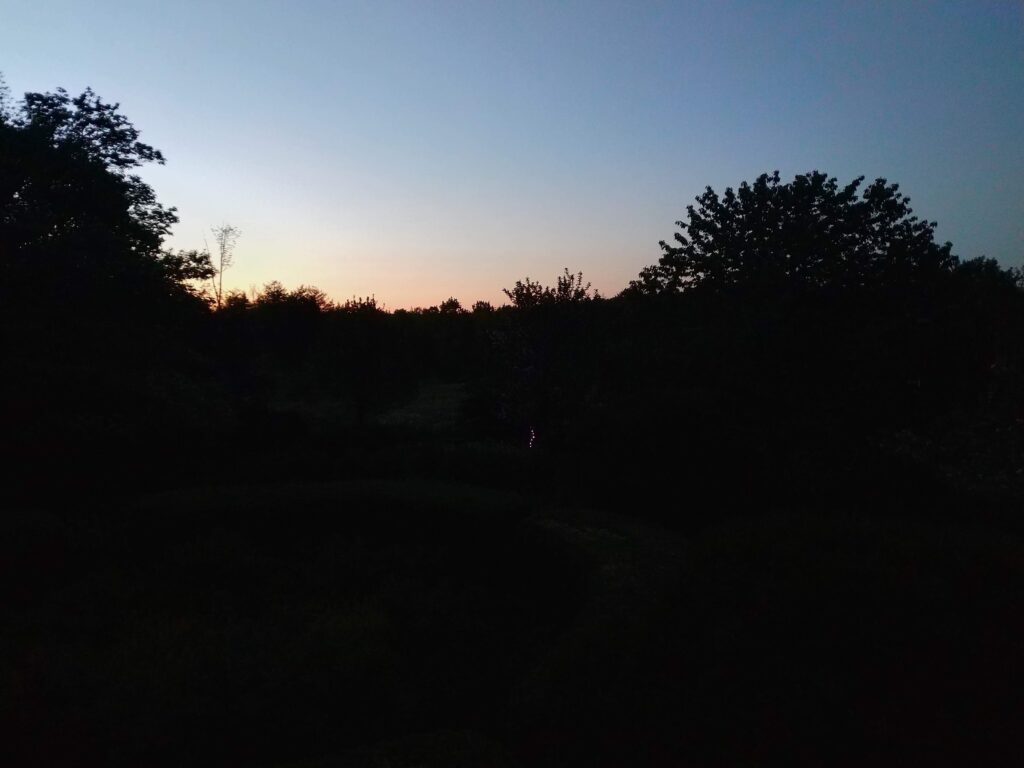 Looks so much more complex and beautiful after a couple wines. The little string of lights are part of a solar wind chime. 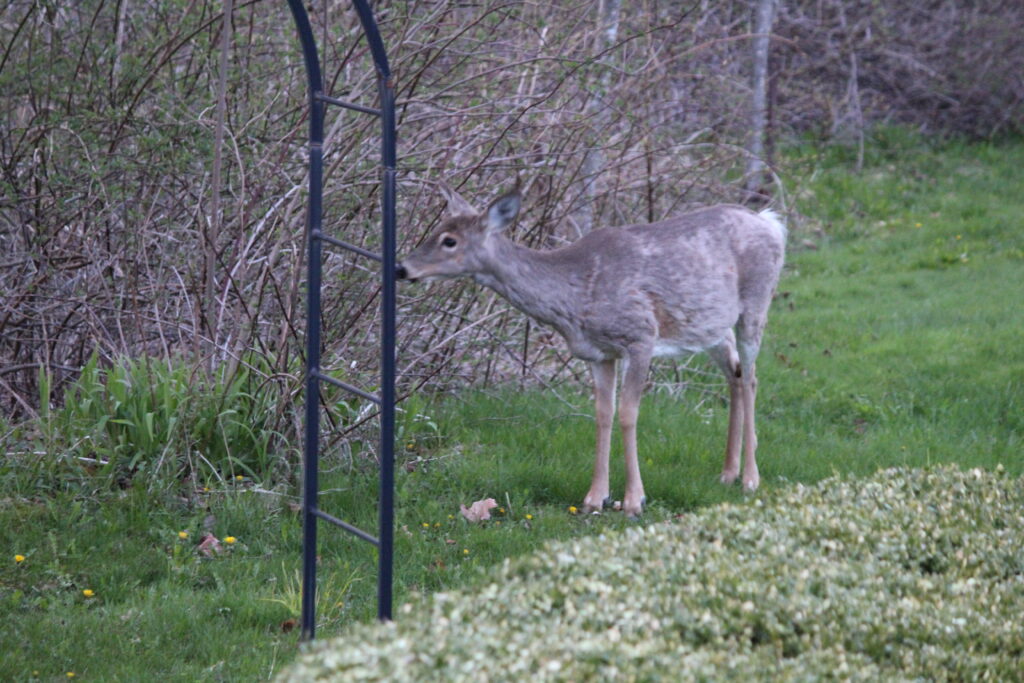 Back to the ground, here is one of our deer friends. 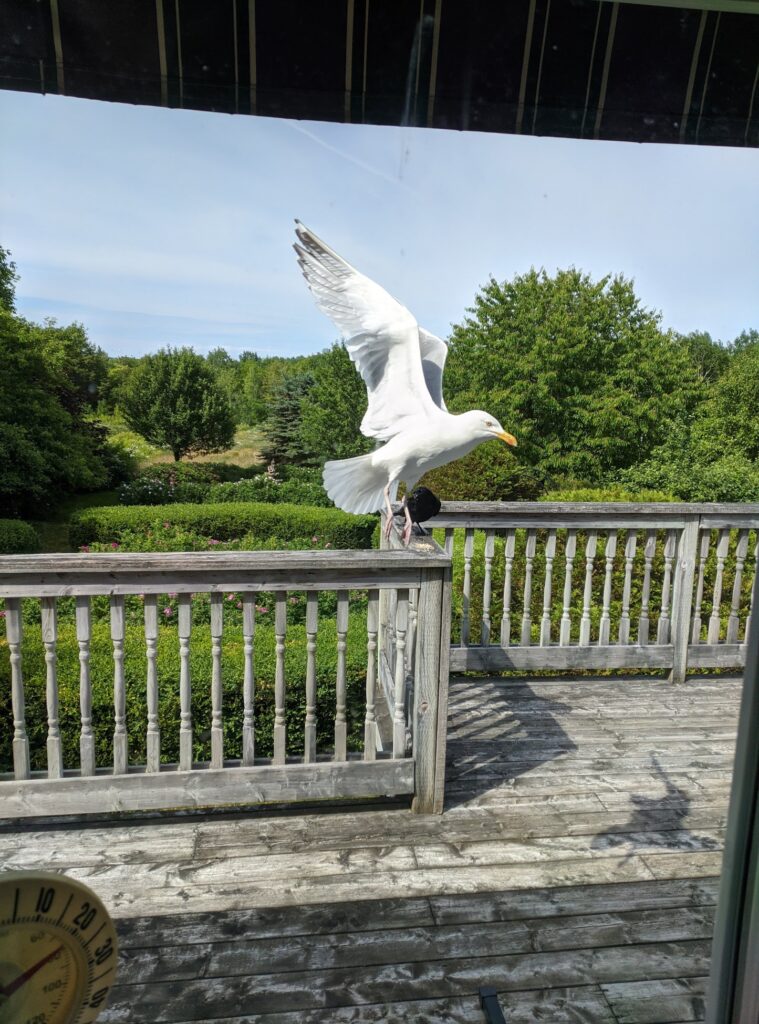 From sky to porch: Charlie the seagull and Anna the crow. They like the new suet I put out when they come by. 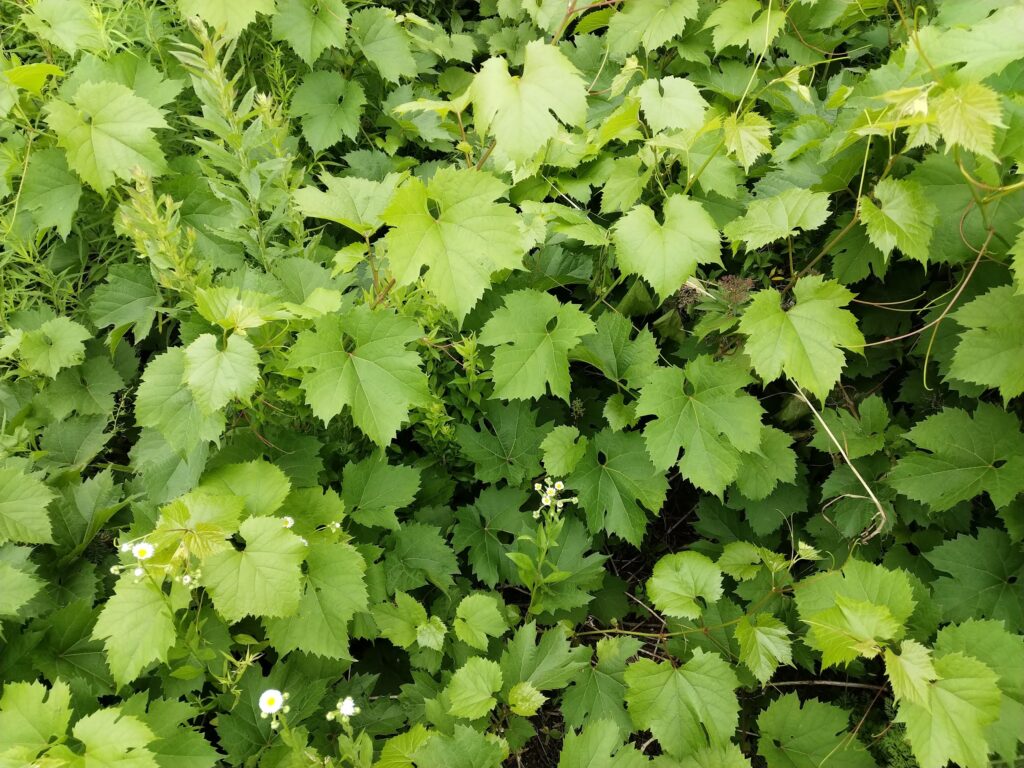 Wild grape leaves. A stranger popped into the yard the other day saying the previous owner let him take some leaves, so we gave him some.

We have not identified about half the stuff in our yard, and of some things we have begun to identify (particularly mushrooms, moths, butterflies, etc.), we need to figure out the species. Here’s an update to my identification list from last month’s post.