It’s been an amazing wild winter, with two big storms just in the last two weeks, but of course I am dreaming of spring projects. We’re done planting trees and have a lot of new work to do on the garden this coming May, but I’ve got a few new projects in mind. One is redoing our awning on the back deck, thanks to a gift from my mother-in-law, and hanging some really cool patio string lights (LEDs), thanks to my husband’s aunt. I also want to find a year-round jasmine bush and build a bat box.

I mentioned in last month’s backyard wildlife post: It’s amazing, but we’ve not seen any bats here yet…According to the Nova Scotia Bat Conservation site, bats are increasingly at risk in Nova Scotia as well as all across Canada and North America due to white-nose syndrome, an invasive fungus. This has caused a 95% decline of bats in Atlantic Canada. It’s so bad, you can even report a sighting at 1-866-727-3447. 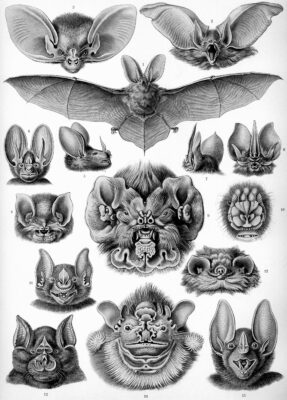 I want to help try to welcome and reintroduce bats back to the area and cut down on the number of mosquitoes on our property. We don’t spray for bugs in order to continue to keep our meadow healthy for our bees and other pollinators that come into the yard. We have a few bird baths, in the form of these old stone statues around the yard and a lake isn’t too far away. Plus, at least last year we saw more rain than normal, though the first year was warmer with some drought.

My reasoning for this initially had to do with using natural ways of reducing the number of mosquitos in our yard, but when I found out that bat populations had declined so much in Atlantic Canada, my interest gained a new level of “I must do this!” According to CBC, the white-nose syndrome “grows on any exposed skin on the bat and replaces muscle fibres and blood vessels, which causes tissue and electrolyte loss—killing the bats.” Bats do help the ecosystem, too. According to CBC, back before bats were in decline, they were consuming more than 60 metric tons of insects each year, including mosquitos, midges, and small moths.

Below is the Annapolis Valley Bat Box Project’s informative video.

I just feel like bats are cool and need to come back to the area. Since we have some acreage out back that we’ve been rewilding, we might as well try to offer bats a place that’s as safe as possible. Bat boxes are narrow boxes that you can hang on a tall pole or on the side of a building that offer a safe roosting habitat. The actual box itself shouldn’t be too hard to build. My husband is a woodworker, but I’ve joined him in a couple projects in the past, including the building of a hammock stand and a bookshelf.

I’ve already done some research. The box should be at least 20 feet high, secure, and ideally not built on a tree, since tree-climbing predators can kill bats. The box has to be warm inside but not too hot in the summer. According to Ontario Nature, 13 out of 18 species of bats in Canada use bat boxes, but this data also comes from the same species found south of the border. Also, in Nova Scotia are three species: little brown myotis, northern myotis, and tri-coloured bat. The site also recommends building multiple bat boxes to offer variety, such as one in a sunnier area and one in a slightly shaded area in case it does get too hot.