This month, I look at main categories of wildlife in Nova Scotia, with the help of Nova Scotia Canada’s government site, and then go on to talk about the ones we’ve interacted with the most. Note that the government site seems to list the main species, not every single one. I will not list amoebas, bacteria, molluscs, fungi, general plants (plantae), fish, or annelids, as the site is short on providing information on all of them, although that’s not meant to understate their importance!

The ones we’ve seen the most in our yard are various snakes. When we moved in last year, we didn’t see any, though Morgan spotted a salamander. Morgan also saw a northern redbelly. This summer I was heading outside and saw an eastern smooth green garter slither across the small path between the garden shed and garage. It sat there for a moment, and I quietly went to get my camera, but by the time I returned it was nowhere to be seen. It had headed into some burning bushes that line a path leading up to the front yard. We see the occasional tiny turtle or frog as well! 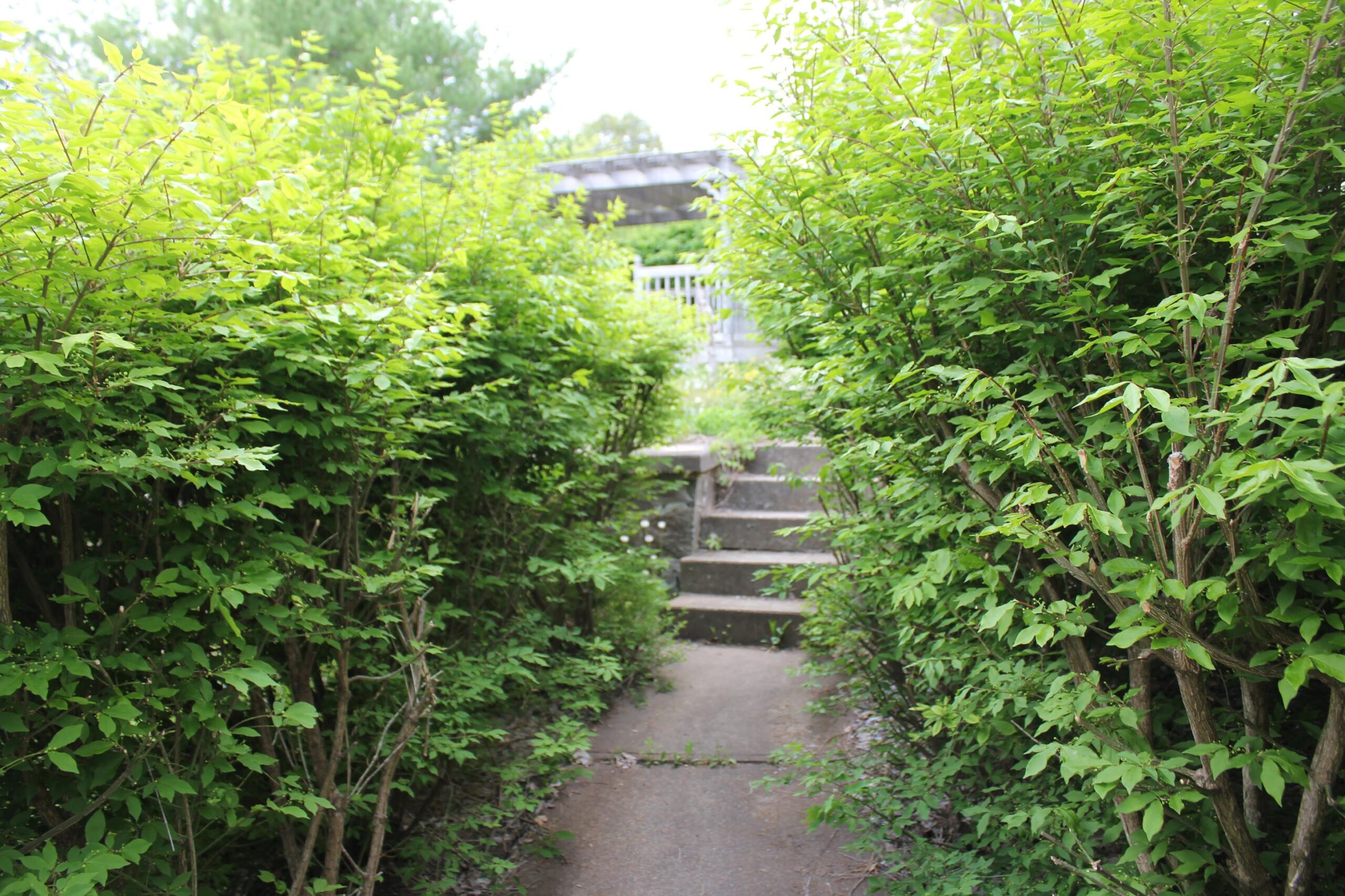 Burning bush (which turns a beautiful red in the fall), is where the green snake fled

Our yard is full of a huge amount of birds, all year round. Even after a huge snowfall the other day, a variety of birds were out there chattering and flying from tree to tree. On our trip up to Cape Breton and PEI this summer, we saw many sea birds on the Atlantic beaches. There, we viewed a lot of birds near the beaches that we don’t see in our meadow, including cormorants, ducks, blue herons, piping plovers, and more. I’ve not yet seen a puffin here, but they exist, especially in a bird sanctuary in Cape Breton. We saw many in Ireland as we boated near the Cliffs of Moher and An Branán Mor, the seastack there. 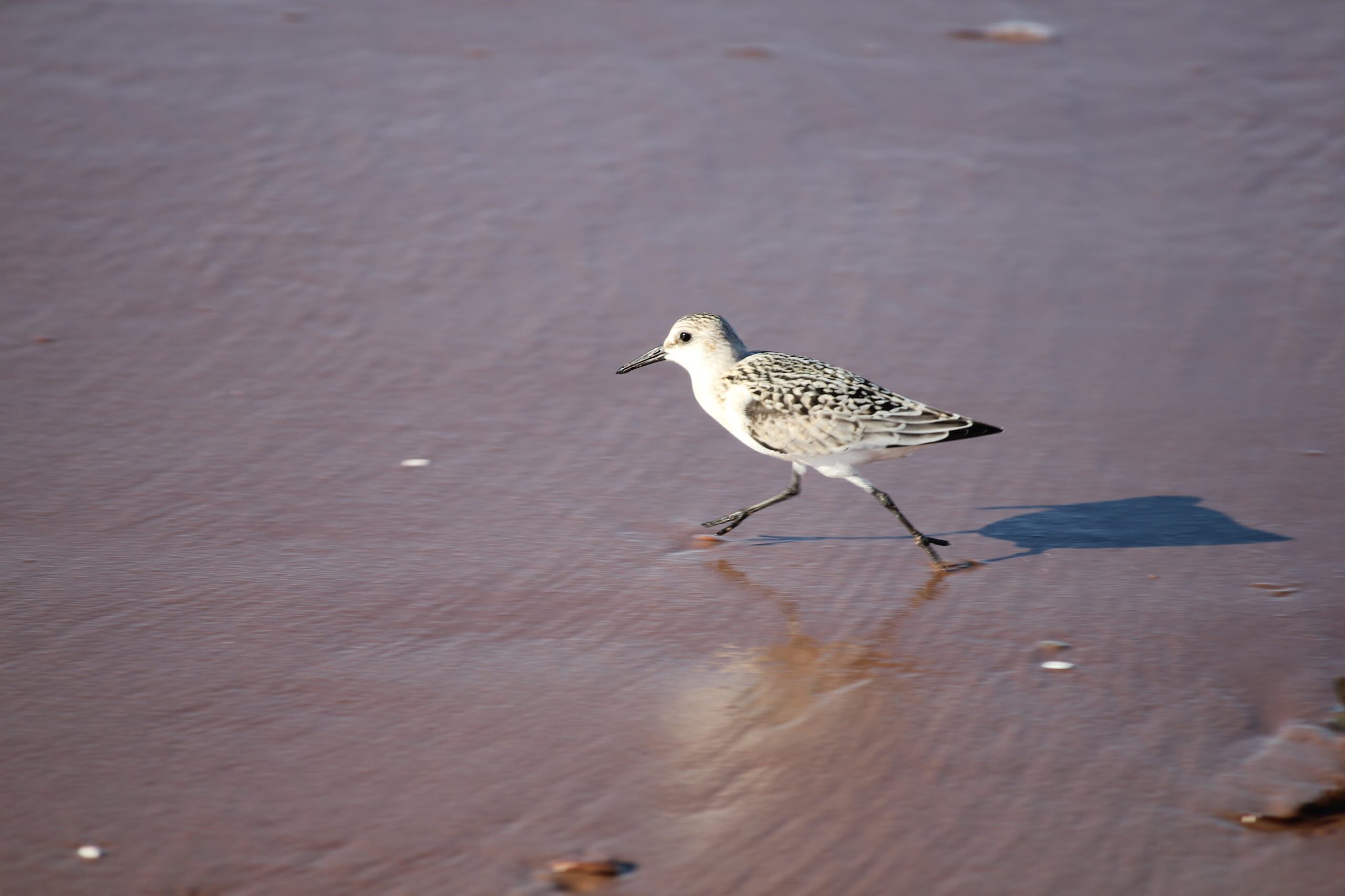 Our local backyard friends are Charlie the seagull and Anna the crow. Charlie comes by now and then, less often these days as he was used to being fed chicken hot dogs by the previous owners of the house and now all he gets is suet, which he is not crazy about. What he doesn’t want, Anna will take (barely visible below, as Charlie tries to steal the scene). We’ve also seen pheasants, starlings, sparrows, robins, cardinals, woodpeckers, hummingbirds, eagles, ravens, warblers, hawks, blue jays, and numerous other birds in our yard. 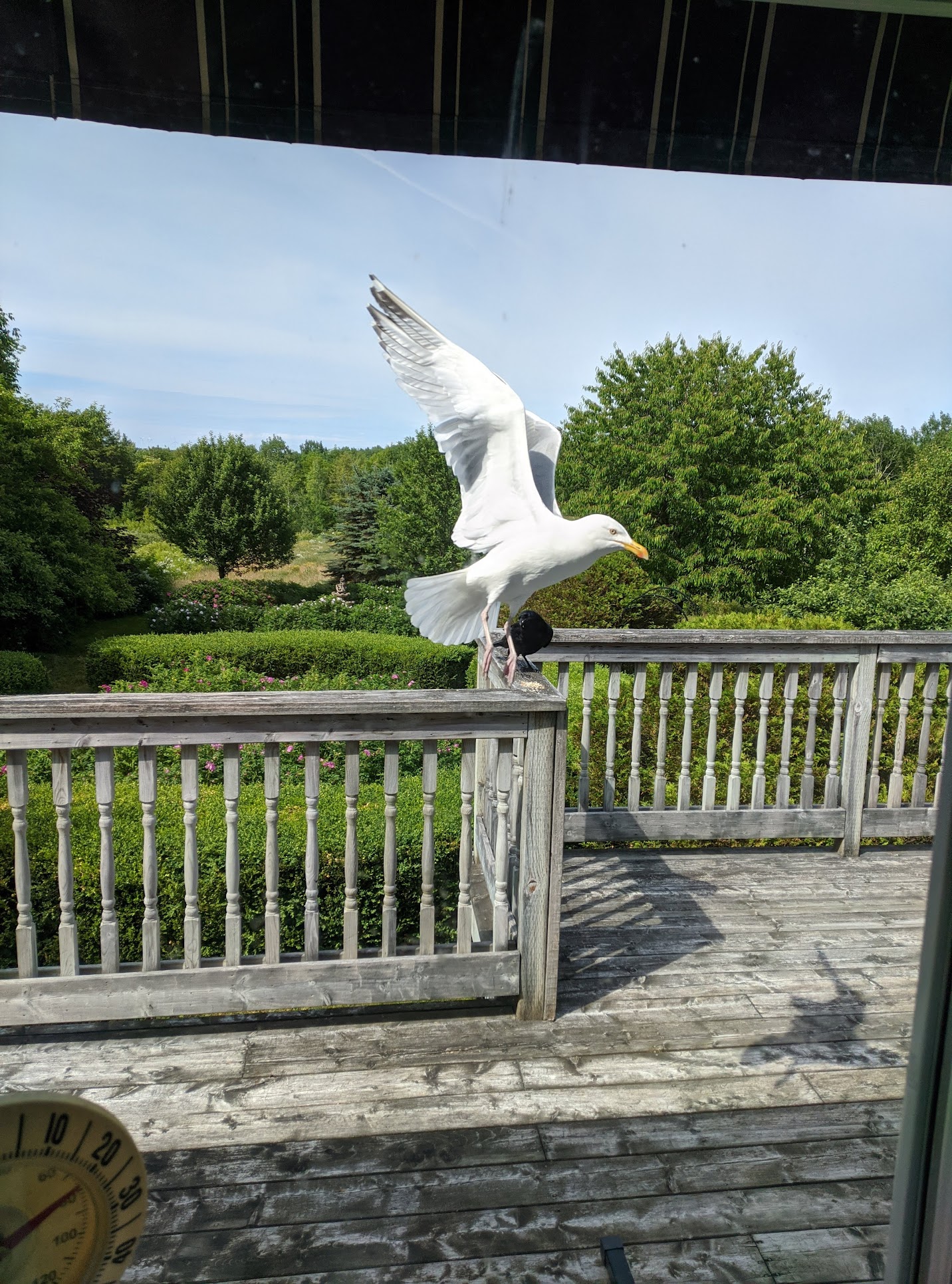 We haven’t seen any cetecea yet while living here, but we’ve seen humpbacks in Hawaii, which was amazing. 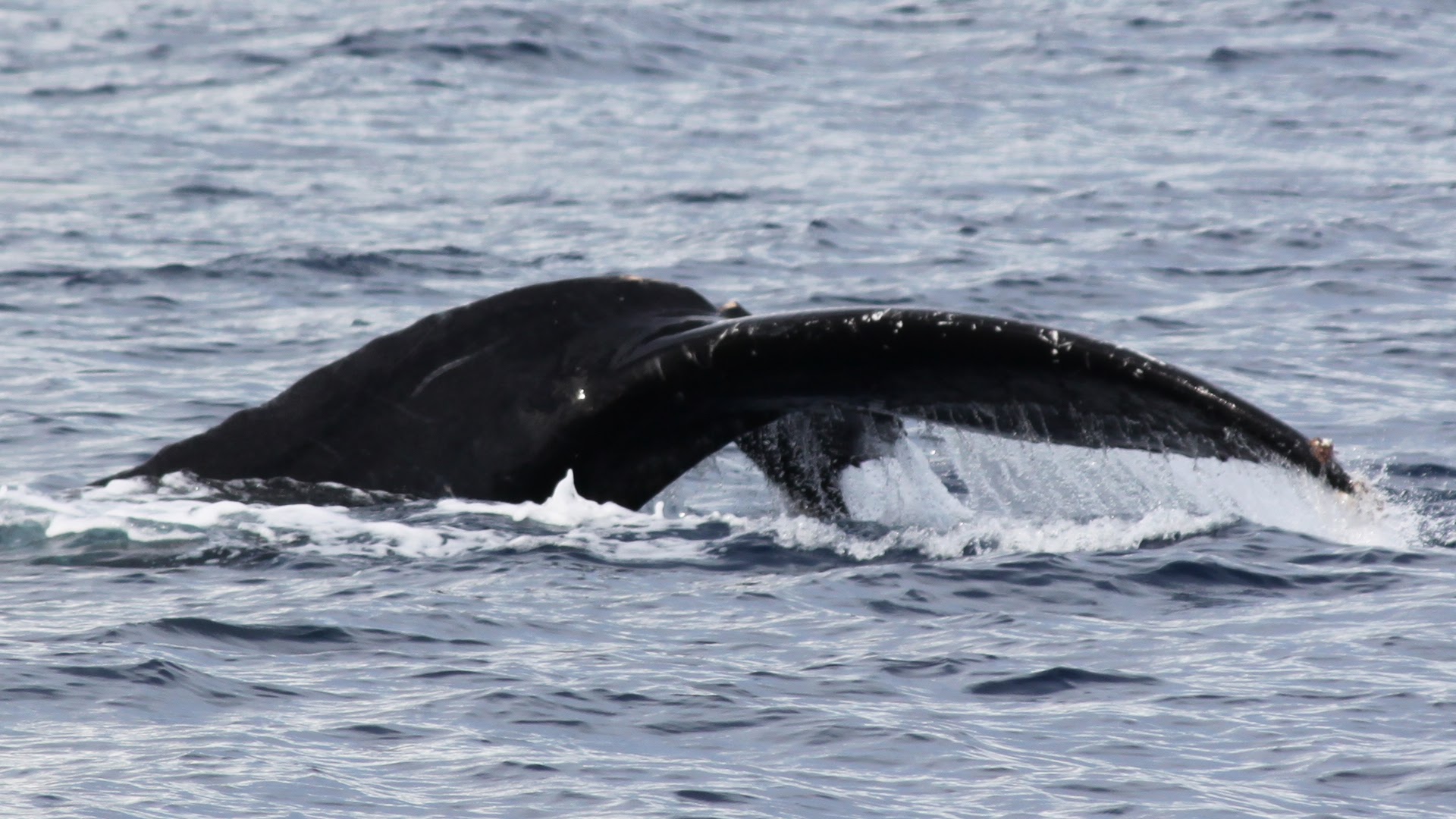 The closest we got to seeing a humpback whale was in Hawaii, alas not here yet

It’s amazing, but we’ve not seen any bats yet, and I might focus on them in the upcoming year. According to the Nova Scotia Bat Conservation site, bats are increasingly at risk in Nova Scotia as well as all across Canada and North America due to white-nose syndrome, an invasive fungus. This has caused a 95% decline of bats in Nova Scotia. It’s so bad, you can even report a sighting at 1-866-727-3447. We’ve talked about building a bat box in our meadow but need to figure out how to build one and on which structure. Bats are wonderful at eating mosquitoes, which is just one of the benefits of these animals. And, of mosquitoes, it’s bad here, especially this past year with all the rain. 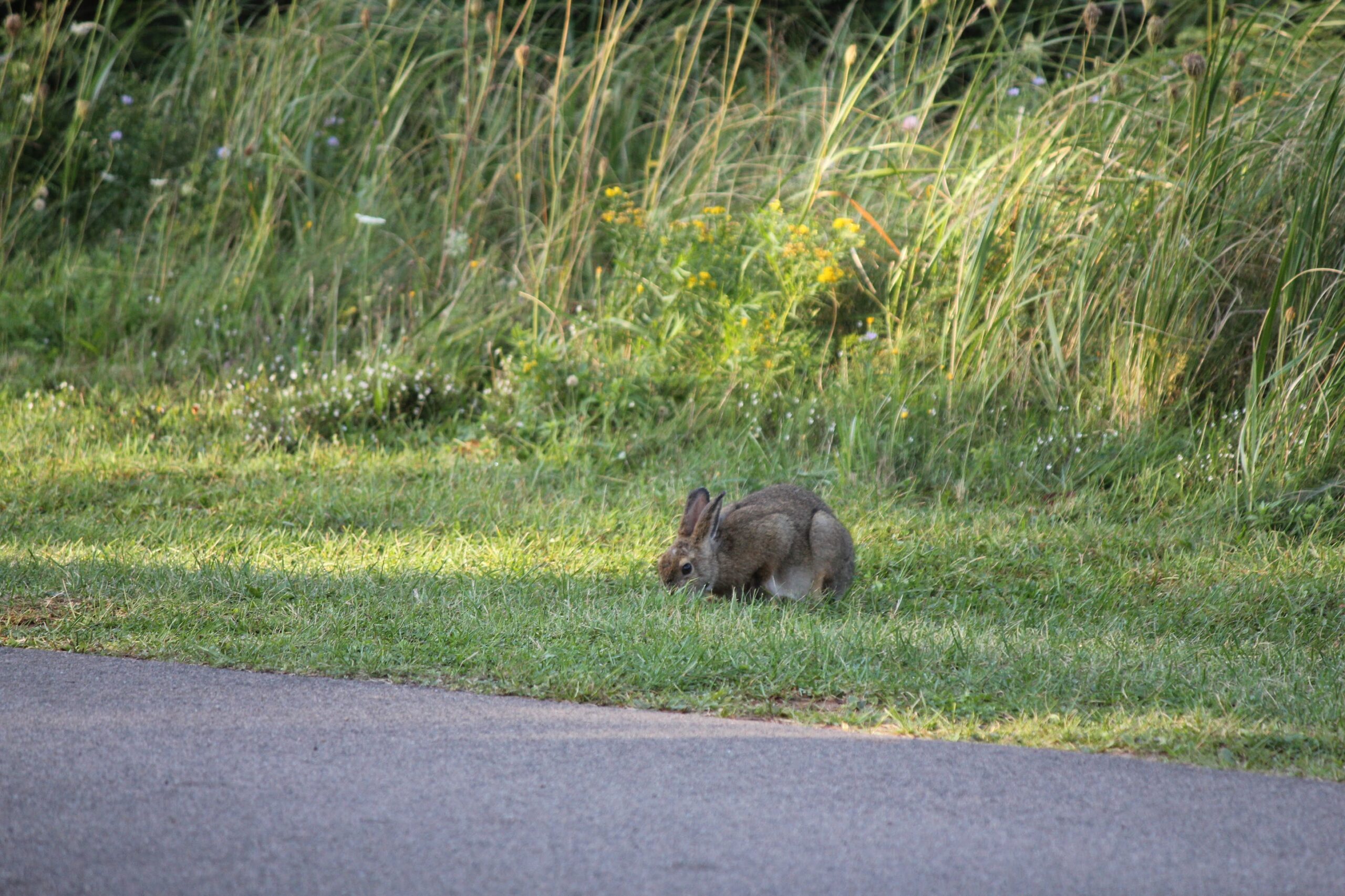 Of bears, we’ve not seen any, but the previous owners of our house said they saw one in the meadow in their 35 years of living in this house, a house they built, actually. Having lived in a city near Vancouver, which had the honor of dumb people ignoring bylaws, leaving out food, and attracting black bears from the nearby mountains—having the most reported sightings in all of BC—it feels good to now live in a place where most bears stay in their natural habitats and don’t often come into neighborhoods or get habituated to people. It does happen, but not nearly as often as we were used to. 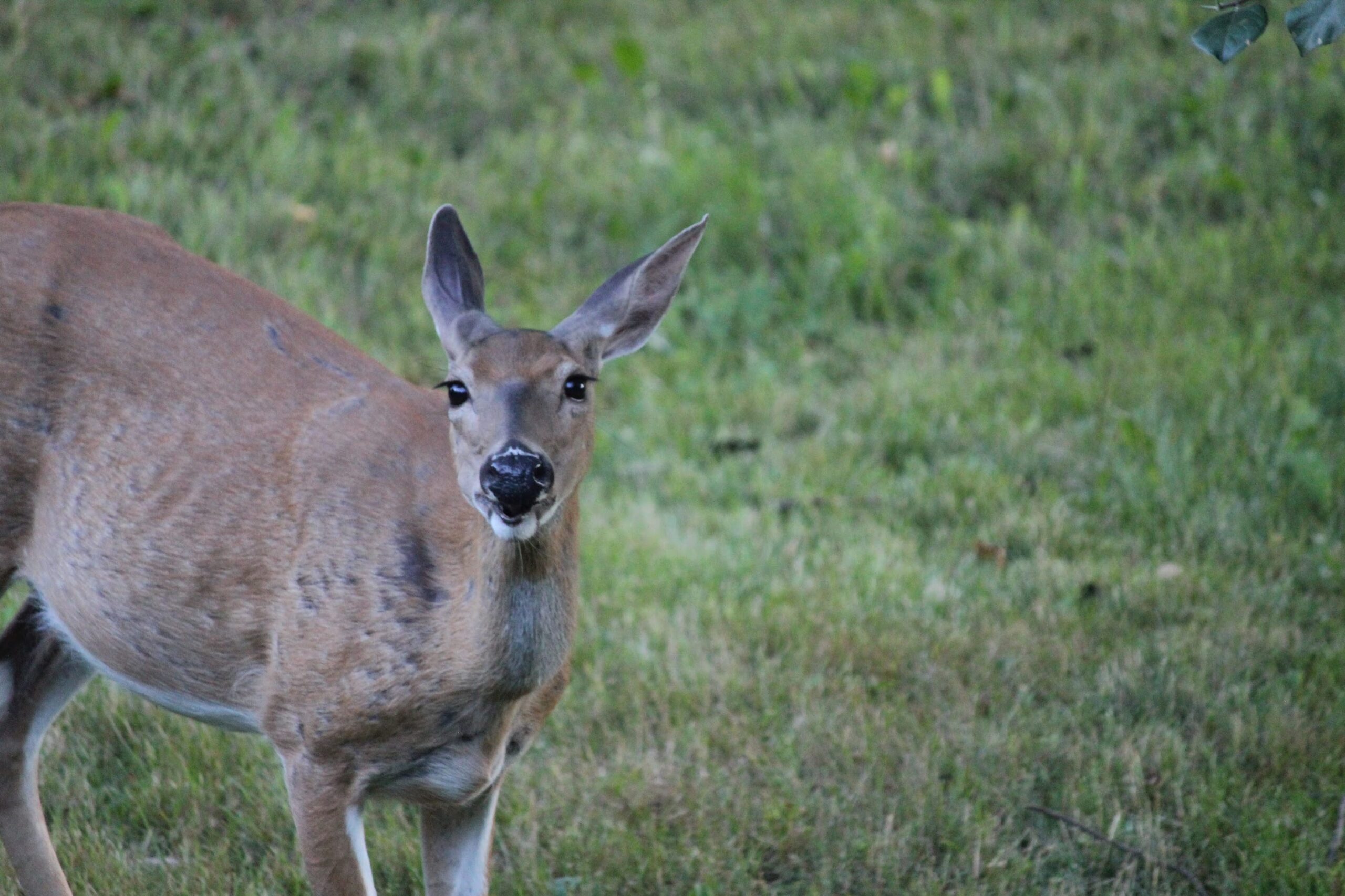 Of course, we’ve had white-tailed deer coming nearly daily into our yard since we moved in. We don’t always spot them, because they stay beyond the spruces, where it’s hard to see them from our back windows, but we do see evidence of them (scat, matted wild grass where they sleep, hoof prints) all the time.

We’ve also been dealing with the occasional deer mouse that gets into the house. We just let them back outside and try to cut down on potential ways they could get inside (dryer vent, via firewood, doors left open too long, unsecured screens, etc.).

Other: We’ve heard nearby coyotes, but it’s rare. In the meadow we’ve seen shrews, chipmunk, fox, porcupine, and squirrels. A woodchuck was burrowing under the shed, but we haven’t seen him in a while.