When demoralised Warren Yeats abandons his failing business, his ex-wife and his city lifestyle to embark on a road trip with more twists and turns than Sydney’s streets, he has no idea how gruelling the outback can be.

Set during tropical Australia’s oppressively humid build-up to the annual monsoon—the Suicide Season—when tempers are short, children are constantly irritable, and adults are tight-lipped, Yeats stumbles across an illegal wildlife poaching operation, falls in love with an attractive female mechanic, and becomes an unwitting trespasser on Aboriginal land.

Whether sharing Yeats’ admiration for an apricot-hued sunset as it soars across an aurora borealis-like sky, watching nectar-eating parrots getting tipsy on the fermenting blossoms of paper bark trees or learning how to bake damper over hot coals, odds are you have never enjoyed a journey as unique as this, following one of life’s nicest losers as he becomes a winner. 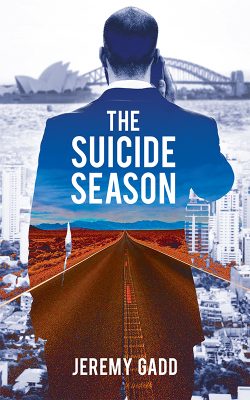 In the afternoon, after the midday heat abated, Yeats refilled the fuel tank in the punt from a jerry can brought for the purpose and ventured out onto the billabong again. The lilies were browning in the heat and had lifted and curled their rims to protect from the worst of the sun. Clyde had told Yeats not to expect to catch any fish. It was the wrong time of the year, and the winds would cause a chill factor on the water and keep the fish deep and inactive, Clyde explained.

“Then why am I trying to catch a fish?”

“Because tourists don’t know that, and you’re meant to be a tourist.”

The men and the two boys he had seen earlier were obviously tourists too. Yeats found them trolling lures past a spot where he had become snagged. As Yeats watched them, a line tightened and one of the adults leapt to his feet, dangerously rocking their boat.

“I’ve got one!” Yeats heard him exclaim, his voice carrying over the billabong.

Yeats slowed to watch the action and to prevent his wake destabilising the standing man and tipping him into the water as he passed. No fish broke the surface in a leaping attempt to throw off and escape the lure, and Yeats suspected the man was snagged, as his had been. The standing fisherman slammed the hilt of his expensive rod into a leather pouch belted around his hips to give greater purchase and furiously wound his reel.

Yeats opened his mouth to tell them there was a snag in the vicinity but then heard one of the adolescent boys say, “Maybe it’s a snag.”

“Don’t be stupid,” snapped the standing adult. “I can tell when I’ve got a fish on the end of my line!” And he heaved on the rod until it was bent double.

“Get the net!” he called, winding his reel. “Stand by with the net!”

The other boy picked up the boat net and sat looking bored while the second adult looked anxiously into the water.

Yeats could see that the fisherman’s line was thick and that it must have had a high breaking strain. The fisherman pulled violently on his rod and dragged their boat over where Yeats had encountered the snag.

The boy who said he might be fishing a snag now stated the obvious. “It hasn’t moved.”

The angler gave a mighty heave on his rod and broke it in two. “Damn it! It got away!” he cried, staring at his rod in amazement.

Yeats motored on. He imagined the angler in the pub that night, telling his story about the huge fish that had got away, breaking his rod to do so. Yeats couldn’t be bothered to fish. He neither expected a strike nor now to meet Crumb. The shadows were lengthening when he entered a previously unexplored section of waterway and saw a punt in centre stream ahead of him. The wind had dropped, and the water lay unruffled, disturbed only by the legs of a water-walking insect or fish fin. The punt held two men. They were both standing and casting into the lilies along either side of the arm. As Yeats came closer he saw they were oriental, possibly Indonesian. One was obviously older than the other and wore all white: a hat, shirt, and baggy trousers. His younger companion was similarly dressed but wore a baseball cap instead of a hat.

They were using fly rods of thin bamboo, and they flicked and whipped their lures along the edge of the lilies with skill. As they worked their lures, they changed places in the punt with, what seemed to Yeats, to be a sixth sense, each knowing exactly where the other was so that the punt was never destabilised and they never got in each other’s way. They cast and retrieved with ease and poise worthy of artistry found on the Opera house or Covent Garden stages, yet one false step and the yellow water of the billabong could part to reveal the villain of the melodrama, with a fixed grin but no moustache.

Yeats followed behind them as they worked along the billabong, mesmerised by the knowledge that their dance of cast and shuffle could become a dance of death. They saw him and acknowledged his presence with short bows before continuing. Although the width between the banks remained constant, the channel narrowed where water lilies had spread almost from one side to the other. The punt with the balletic Asians on board slowly turned into another channel and Yeats, sprawled in his punt and lazily somnambulant with the hypnotic effect of having watched the fishermen repeatedly cast and collect, motored slowly on.

The perfume from the lilies was almost overpowering, and Yeats felt heady. He couldn’t believe the beauty of the place. Even the name, Fire Dreaming Island, had a beauty and mystery about it. If the trip had led him here and nowhere else, it would have made the journey worthwhile. Yeats felt ecstatic. This experience almost compensated for the dilemma in which he now found himself. At that moment, his fishing rod, which he had rested behind him, its lure dangling and occasionally touching the water, bent downwards. The tug became a pull, and then the reel whined as line ran out, cleaving the water like wire through cheese. Yeats grabbed the rod and applied the tension, and a fish leapt out of the billabong. Bright in the sunlight and beautiful to behold, it tail-danced across the water, shaking its head to throw the lure. Yeats tried to reel in the slack line created by the fish’s leap for freedom but couldn’t keep sufficient tension on the line. The fish leapt a second time, and shaking its head again, tossed the lure-free. As quickly as it had appeared, it was gone. Yeats sat trembling in the punt, his breath shallow, his eyes wide with wonder. Yeats was disappointed, yet glad the fish had got away.

“That’s not how I taught you how to fish, Wazza.”

The voice came from over his shoulder, and Yeats turned to see Crumb standing on the bank about three or four metres from the punt. His arms were folded, and his usual cigarette sat in the crease of his mouth. The Asians were almost out of sight around the bend, their rods flicking in the fading light.

Jeremy Gadd is an Australian author and poet. After graduating from the National Institute of Dramatic Arts, he worked extensively in professional theatre in Australia and the United Kingdom before concentrating on his writing, which includes plays, the publication of novels, fifty short stories and poetry. He has also written dialogue for a dance performed by The Sydney Dance Company at the Sydney Opera House. He later earned Master of Arts with Honours and PhD degrees from the University of New England. He is a Writing Fellow of the Fellowship of Australian Writers.