This month we head to Germany, for the first time in the world eco-fiction series, to explore The Rooftop Garden (Nightwood Editions, October 2022), a debut novel from Menaka Raman-Wilms’—author, journalist, and host of The Globe and Mail’s The Decibel. Thanks to Menaka and publicist Tania Blokhuis for their help in getting this interview together. 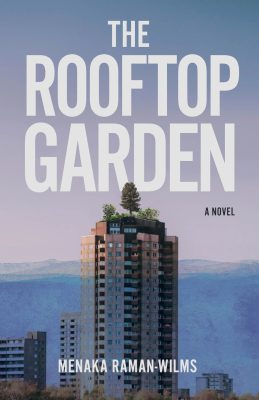 The Rooftop Garden is a novel about Nabila, a researcher who studies seaweed in warming oceans, and her childhood friend Matthew. Now both in their twenties, Matthew has disappeared from his Toronto home, and Nabila travels to Berlin to find him and try to bring him back.

The story is interspersed with scenes from their childhood, when Nabila, obsessed with how the climate crisis will cause oceans to rise, created an elaborate imaginary world where much of the land has flooded. She and Matthew would play their game on her rooftop garden, the only oasis in an abandoned city being claimed by water.

Their childhood experiences reveal how their lives are on different trajectories, even at an early stage: Nabila comes from an educated, middle-class family, while Matthew had been abandoned by his father and was often left to deal with things on his own.

As an adult, Matthew’s dissatisfaction with life leads him to join a group of young men who are angry at society. But Nabila isn’t aware of the extent of his radicalization until they finally meet on a street in Berlin.

Mary: Hi, Menaka. It’s great to have you here. Tell us something about your experience and background in Canada.

Menaka: I grew up just north of Toronto, and my parents thought it was important that my sister and I see as much of Canada as possible. We used to spend lots of time camping in Ontario. One year we did a car trip out to Newfoundland, and then even a month-long hiking trip in the north. By the time I went to university, we had been to all ten provinces as well as the Yukon. By no means did I know each area in its entirety, but I think this travel gave me a sense of how expansive the country is and how different each part of it is from one another. Most of our travels involved hiking and camping, and I think this also gave me an appreciation for nature and how humans interact with it.

Mary: Your new novel, The Rooftop Garden, takes place mostly in Berlin. It explores themes of extinction, climate change, and extremism. What led you to write it, and can you tell us something about the novel?

Menaka: In 2015 I spent six months in Berlin, and I found it to be a fascinating city that I wanted to write about. One of the things I loved about it most was the way that natural and urban spaces came together in the city. Since many parts of Berlin were badly damaged in the second world war, and the city was divided by the Berlin Wall for decades, there were areas that weren’t well repaired and then just left like that. As a result, there are places where trees and other wildlife have grown over old train tracks or up through old buildings. I was fascinated by the way the natural world was reclaiming these spaces. I was used to thinking about how humans destroy nature to build urban environments over it, but in some of these places in Berlin, it was the other way around. It sparked my imagination.

It was also interesting to be in Berlin in 2015, since that was the year that over a million people came into Europe because of the war in Syria and other instabilities. Though a lot of people in Germany were welcoming, others disagreed, and this ramped up political conversations. Then, in November, the Paris attacks happened, where 130 people were killed. This increased tensions and made a lot of people really nervous. Being in Berlin at the time, I could feel the mix of emotions, and it made me think about how people react to these big issues and fears.

This all led to The Rooftop Garden. It’s a novel about Nabila and Matthew, who are friends when they’re children and then reconnect as adults. As kids, they would play an imaginary game on a rooftop in Toronto, where they were living in a world flooded by oceans because of climate change. As an adult, Matthew goes missing in Berlin, caught up in an extremist movement. Nabila then travels to Berlin to find him and try to bring him back.

Mary: I really want to hear more about the “Fairytale Forest” and how that inspired your book.

Menaka: The scene in the Fairy Forest is one of my favourite scenes in the novel. It was based on a real abandoned amusement park, Spreepark, that used to be in East Berlin. When it was abandoned, the attractions were just left, and over time, nature grew over everything. It was the most extreme and incredible example of how nature had taken over some of the urban spaces in Berlin. There were old swan boats (some missing their heads!), a pirate ship with graffiti on the sides, even a Ferris wheel. It was all like a fairy tale gone slightly wrong, and I was fascinated.

Mary: That is so cool. It reminds me of the abandoned Paradise Park, which was once a nature theme park in Hawaii and later was used as a filming location for “Lost,” particularly where the characters Kate and Sawyer were kept in cages. A tour guide let us in there, and by then, it was overrun by actual nature!

I’m curious about the relationship between the book’s characters, Nabila and her childhood friend Matthew, now in their 20s.

Menaka: Though the book deals with themes of climate change and extremism, at its core, I think it’s really a story about the relationship between Nabila and Matthew. It’s not a situation that is easy to define: They were friendly for a brief period as children, where they played in an elaborate imaginary world that stuck with both of them into their adulthood. That shared memory of those experiences is a big part of what binds them together. As adults, their relationship becomes more complicated. They haven’t seen each other for years, but a chance meeting brings them back into each others’ lives. Matthew is lonely and sometimes wants more than just a friendship from Nabila, and Nabila tries to walk a fine line of supporting Matthew while also keeping some boundaries. However, Nabila is also lonely, and in some ways that drives her connection to Matthew as well.

It’s also interesting to think about how they react differently to situations. Nabila has been raised with the mindset that she can effect change, specifically when it comes to climate change, and has been given the intellectual tools to try and do just that. Matthew, however, doesn’t have the same kind of upbringing, and so his response is often to be overwhelmed and feel powerless.

Menaka: It can be hard to find time to write these days, but I’m at the very early stages of starting the next novel. It’s about the relationship between a grandmother and granddaughter. I’ve spent a fair bit of time with my own grandmother these past few years and have been thinking about how family understands each other, so I want to explore this further.

Mary: I’m looking forward to that. Thanks so much, Menaka! 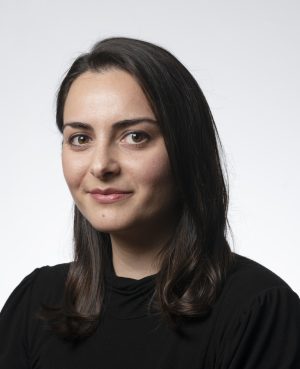 Menaka Raman-Wilms is a writer and journalist based in Toronto. She’s the host of The Decibel, the daily news podcast from The Globe and Mail. Previously, she was a parliamentary reporter for The Globe and Mail and an associate producer at CBC Radio One. She has a master’s in creative writing from the University of Toronto and a master’s in journalism from Carleton University. She’s also a classically trained singer. For several years, Menaka reviewed books for the Ottawa Review of Books and has moderated panel discussions at Ottawa’s Prose in the Park literary festival. In 2019, Menaka’s story “Black Coffee” was shortlisted for the CBC Short Story Prize. She received the youth award at the Alice Munro Festival of the Short Story in 2016, and won Room Magazine’s 2012 fiction contest. Her work has also been published in Broken Pencil Magazine and Acta Victoriana.