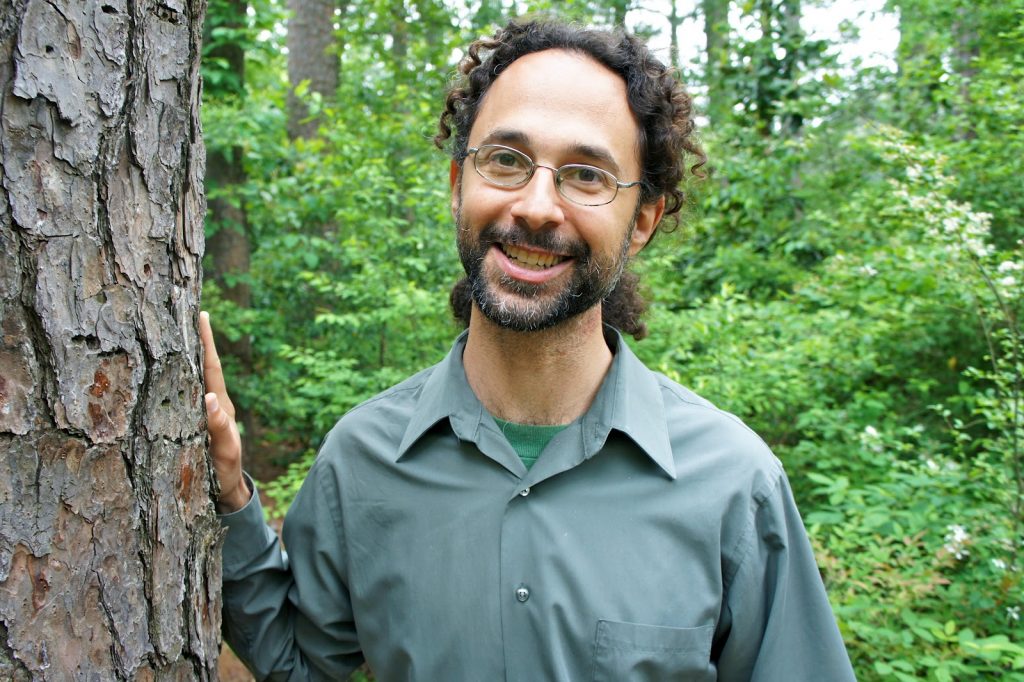 A love of nature led Jed Brody to technology, to try to save nature. Photo by Carol Clark.

Danielle Gasket’s search for ancestral secrets is imperiled by warring factions that agree about nothing but that Danielle must die.

Danielle’s home is a dystopian city beneath the earth’s surface. People have lived underground for so long that knowledge of the surface is preserved only in dwindling communities of persecuted heretics. According to the heretics, a prophet called “the philodendrist” led people underground to repent for their violent conquest of the natural world.

Following a string of clues while eluding pursuit, Danielle races toward the long-forgotten path of ascension to sunlight, relying upon her wits and valor to make it through. Finally, her mercy toward her fiercest persecutor convinces him to help her ascend to the pure waters of the sunlit world.

Jed Brody wrote The Philodendrist Heresy as a call for the preservation and resurrection of the great forests of the earth. “Philodendrist” means “tree lover.”

How many people do you know who care about the environment so much they don’t drive a car? Meet Jed Brody, an Emory physics senior lecturer who loves trees and let his driver’s license expire when he was 21. Brody, who lives about two miles from campus, gets around Atlanta on foot, bicycle, public transit and through occasional rides from friends. To further reduce his footprint, he does not use air-conditioning.

Brody joined Emory in 2003 and focuses on teaching in the small, but elite, physics department.

You grew up in the suburbs of Philadelphia, but I’m guessing it wasn’t a typical suburban childhood.

My dad had hair down to his shoulders and did Kripalu yoga. Every weekend we went to an ashram where the adults dressed all in white, called each other brother and sister, and crawled on their knees a lot. That seemed normal to me.

What got you into physics?

In fourth grade, we went on a field trip to a big General Electric plant. During the tour, they showed us these solar panels and talked about the efforts of science to improve energy efficiency. Love of nature led me to technology, to try to save nature.

I went to graduate school in electrical engineering at Georgia Tech, because it had been a world leader in making multi-crystalline silicon solar cells. All my solar cells came out crummy. I don’t know why. I just wasn’t good at making them. It turns out that ideological drive does not confer technical aptitude. I realized that I’m more of a theorist by nature.

You served in the Peace Corps in Benin in West Africa. What was that like?

I taught high school physics and chemistry. I learned a lot, teaching 50 to 60 students in classes that were two to three hours long. It also helped me overcome my adolescent immortality syndrome. I had diarrhea pretty much every day. It was rare when I didn’t have intestinal pain. The Beninese seemed like happy, healthy people and appeared to be mostly immune to the bugs that I had. Many of them are incredibly buff. They use these giant cement tiles to pave their roads and the laborers would hurl them to each other across 30 feet. Their muscles would be working like pistons.

You’ve published six papers on teaching in science journals. What are they about?

In the most recent one, for the American Journal of Physics, I developed an experiment and an equation for how water oscillates in a tube. The frequency of oscillation is lowest when the tube is about half-full of water. So you have these beautiful, U-shaped curves. It’s a way to teach a variety of physics concepts, including the basic Newtonian mechanics of oscillating motion.

In a previous paper, I described a novel way to determine atmospheric pressure with a similar apparatus. Unlike a conventional barometer, there’s air, not vacuum, above the fluid in the tube. In a way, I invented a kind of barometer for pedagogy. The idea for it grew out of experiences I had teaching in Benin, when I had to demonstrate complex concepts using local materials.

You also went to India five summers in a row to teach physics to monks as part of the Emory Tibet Science Initiative. How is that going?

It’s challenging, because the monks don’t have a lot of math, but they are great students. They ask some really outlandish questions. I was talking about the gravitational force between the Earth and the moon and a monk said, “What would happen if the moon was shaped like a cone and not a sphere?” That gave me the chance to talk about how gravitational force depends on the distance between the centers of two masses.

The Dalai Lama says that if the ancient Buddhist scholars were alive today they would study science, because Buddhist philosophy is studying what is reality, as opposed to illusion.

How do you personally reconcile science and religion?

I’m Daoist. I meditate and do tai chi daily, and I consider myself deeply religious. I believe that spirit permeates everything. So to me, studying the laws of physics is a way of communing with spirit.

What is your novel, The Philodendrist Heresy, about?

It’s about a dystopian underground society, where people have been living so long that they have no knowledge of the surface and things like trees, the moon and the sun. The food is recycled glop that comes out of machines, and everyone experiences gastric pain while eating. The heroine, Danielle Gasket, is trying to reach the surface. She’s racing from one clue to the next while being chased by warring factions that want to kill her. It’s kind of a science fiction version of “The Da Vinci Code.”

I’m donating my royalties from the book to Sustainable Harvest International. It’s a charity involved with restoring forests founded by a fellow Peace Corps member.

Will you ever break down and get a car?

Last night, I actually had a dream that I found my perfect home, in the middle of a forest. So, who knows, I might have to get a car if I lived there. Meanwhile, I don’t feel the need for one. I don’t really believe in sacrifice. I love the way I live. It’s a celebration of the Earth and all of my values.

*This interview was originally published at eScienceCommons and is reprinted with permissions by Stormbird Press.

Jed Brody is a Senior Lecturer in Physics.  His short fiction has appeared in Creative Loafing and an anthology of Science Fiction by Scientists. His essays have appeared in Physics Today, the Philadelphia Inquirer, and One Hand Does Not Catch a Buffalo: 50 Years of Amazing Peace Corps Stories: Volume One: Africa.  His technical articles have appeared in the American Journal of Physics, the Journal of Chemical Education, Solar Energy Materials and Solar Cells, Progress in Photovoltaics, and Solid-State Electronics.

He was a Peace Corps volunteer in Benin, West Africa, where he taught high school physics and chemistry.  He studied solar electricity at Georgia Tech.  As a member of a US-Tibet Science Initiative, he traveled to India five times to teach physics to Tibetan monks and nuns.

He enjoys yoga, qigong, birdwatching, swimming, and reading, but usually not all at the same time. Find more about Jed on his Facebook.