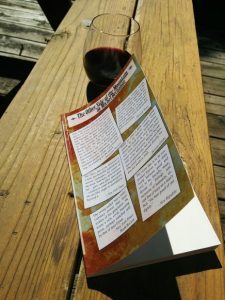 Michael Bernanos’s The Other Side of the Mountain is an awesome book, which I ordered used. The genre is weird fiction–I learned of the book from author Jeff VanderMeer whose Southern Reach trilogy I’m enjoying. He and his wife Ann edited an anthology called Weird, which included The Other Side of the Mountain. I think when weird fiction takes on ecological themes I’m really hooked by it. Bernanos’s novella was published in 1963, and it was eventually translated from French to English. I read this in one sitting, on my hammock on the back deck whilst drinking some red wine.

It starts normally enough, with a hungover 18-year-old guy agreeing to join a ship crew. A storm and lack of food and water results in some pretty horrible conditions, including cannibalism and death among the other crewmates. The teen becomes friends with the cook, also a long-time sailor, and they survive only to reach a different realm of some kind. The stars are different, and the land they reach is red and hellish. They think that reaching the big mountain in the middle, and seeing what’s on the other side, is their only salvation. Yet, pure horror happens on their trek, including carnal plants, bowing trees, a river that opens up to sink them, small villages and other areas where things and people have “vitrified” (I wonder if petrified is the better description), and so on. The basis of the story seems to be a poetic telling of nature in the very raw, where horror in our definition happens all the time. Seen through the lens of earth people, the new land defies much logic but simply has different species and laws of physics. It was just a really interesting novella that makes me want to read more weird fiction.

Truth is that there is no salvation for any of us. Still, the novel was not gloomy insofar as the friendship between the cook and the teenager, and how courage and loyalty led them together up the mountain, even if their fate was not life. I find the raw and weird in nature worth investigating through the page-flipping and suspenseful poetics of fiction. I’ve always been attracted to the surreal, much enjoying old Spanish cinema like Víctor Erice‘s The Spirit of the Beehive or any of Guillermo del Toro’s films like Pan’s Labyrinth and The Devil’s Backbone. As a teenager I was really into Alejandro Jodorowsky’s El Topo, Fando y Lis, and The Holy Mountain.