For this part of the global eco-fiction series, I was thrilled to talk with Rajat Chaudhuri, author of The Butterfly Effect (September 3, 2018, Olive Turtle, Niyogi), which Scroll.in describes as a novel that “blends mystery, eco-fiction and a Russian doll narrative.” Truly this story is a wild ride, with brilliant and Ballardian descriptions and actions of a future world that I don’t think we want to be in but which are vibrant and alive as well as deadly. The story jumps around the map, beginning in India. 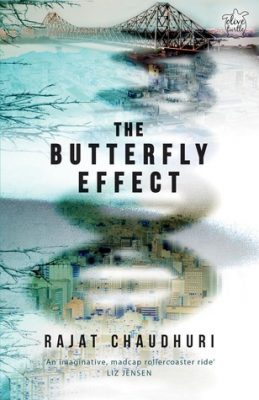 A self-obsessed Calcutta detective who goes by his last name Kar, an enigmatic internet cafe hostess in Seoul, and a hotshot geneticist labouring away on a top-secret corporate project: These are just a few pieces in the puzzle that need to be put together to explain a world sucked into the whirlpool of the butterfly effect. In the decaying capital city of a near-future Darkland, which covers large swathes of Asia, Captain Old – an off-duty policeman – receives news that might help to unravel the roots of a scourge that has ravaged the continent. As stories coalesce into stories – welding past, present and future together – will a macabre death in a small English town or the disappearance of Indian tourists in Korea, help to blow away the dusts of time? From utopian communities of Asia to the prison camps of Pyongyang and from the gene labs of Europe to the violent streets of Darkland – riven by civil war, infested by genetically engineered fighters – this time-travelling novel crosses continents, weaving mystery, adventure and romance, gradually fixing its gaze on the sway of the unpredictable.

The genre-blurring tale left me hanging on edge as I discovered a new world through Rajat’s imagination, and I would recommend this book highly. I talked with Rajat about his new novel. He explained that The Butterfly Effect is a transcultural novel, which crosses borders while also switching back and forth in time. The major settings of the book are India (present and near-future Calcutta), England (London and southern England), South Korea (Seoul and other places), North Korea and China (minor setting).

Mary: What motivated you to write this novel?

Rajat: The book has an eco-dystopian theme centered around the dangers of genetically modified (GM) crops and the inherent threats of this technology.  It also has a climate change backdrop in a near-future setting. The double whammy of climate change disaster and a GM experiment gone horribly wrong is what triggers the disastrous circumstances portrayed in the book.

I have been an environmental activist for many years now. I have been a climate change advocate representing civil society groups at the United Nations at New York, and have spoken and written about climate and environment issues in international and national fora and publications. I am also a past contributor on sustainable consumption issues to the World Human Development Report published by the UNDP, New York.

This activist background motivated me to translate my learning to my creative work, especially through the vehicle of a novel. The so-called realist novel, because of its debt to the Enlightenment, has shied away from engaging with Nature and issues involving large collectives, and focused instead on what John Updike calls an “individual moral adventure”. This focus, Amitav Ghosh points out in his seminal work on climate change – The Great Derangement – has ghettoised all other kinds of writing, placing them in genre fiction.

I, like some others, feel the time has come  to change this as climate threats have been growing in exponential proportion and dangerous technologies are being pushed into our lives and food plates without proper testing and without the use of the “precautionary principle,” which is a foundational principle of the Biosafety Protocol. There are, however, writers in the West, like Cormac McCarthy, Margaret Atwood, Liz Jensen, Ian McEwan, Barbara Kingsolver, and others who have been engaging with climate environment and disaster issues. In my country, however, these issues are rarely handled in creative fiction.

All of the above influenced me to write The Butterfly Effect. Above all, the challenges and difficulties of creatively engaging with the unimaginable aspects of worldwide disaster caused by human actions in the Anthropocene have driven me to write this book.

This book is not far future science fiction about inter-galactic wars, nor will you find teleportation here, rather this is speculative fiction of a very possible future, amplified for the purposes of creativity and dramatisation. Mary: How do you feel climate change and/or environmental crises play a part in the places in your novel–and how do you feel that they might be unique compared to the rest of the world?

Rajat: My setting is both the developing and developed worlds (India, Korea, UK, etc). Each of these places will be affected by a runaway bio-technology disaster (as in my book), but impact will vary according to preparedness. Climate change, which is a backdrop for the book, will affect all these places in similar and different ways. So in my book we find hot summers in England, fertile crop-growing regions in Tibet, the disappearance of island nations like Sri Lanka, and the flooding of Japan. These are backdrops in the story. As we all know and have begun to see, with increasing regularity, climate change will have unpredictable consequences from increased storm activity, desertification, extreme temperatures, and crop failures, among several other crises.

The uniqueness of the affected region in my story is that it covers large parts of Asia and essentially constitutes the developing world. Because of a lack of preparedness, vulnerable populations, limited resources, corruption, the business-as-usual mentality, lack of awareness, and the attraction of high-consumption life styles, these regions will definitely be worse off once a world-wide disaster begins to unfold.

I also want to mention Nassim Nicholas Taleb’s Black Swan incidents, which are rare (hard to predict) incidents of devastating consequence. A Black Swan incident–such as the Fukushima Nuclear Disaster–is very hard to predict but can be understood in retrospect. Just as the Fukushima disaster and meltdown was the result of a chain of incidents that were too rare for the designers of the reactors to foresee, so in this book we find a concatenation of rare and almost unpredictable events. The bottom line is: Change high-consumption lifestyles and stop employing dangerous and unpredictable technologies, even if for welfare. There are always simpler solutions.

Mary: Is there anything else you want to tell us about the story?

Environmental disasters are often borderless, and so is my story. This is why the plot travels from one place to another and the characters are drawn from many countries.

The book benefited from a number of international fellowship grants (Korea, UK, Scotland) which helped me research these places and people and set up the scaffolding of the novel. There is a long sections of the book which have to do with North Korea, and important characters from that country, and I feel what the story is telling us is that risky technologies become a bigger threat when these are contested upon by powers which lack the checks and balances of a functioning democracy – corporate power and totalitarian regimes to give you two examples.

This book is also about the tug-of-war between reason and faith or reason and its absence. This duality is portrayed through the character of the detective Kar, who is a man of reason led into strange circumstances where faith and magic fight a losing battle with the all-consuming power of science. It is in the character of the detective that we find a reflection of this age-old contest.

Mary: Thank you, Rajat, for the in-depth background of The Butterfly Effect.

Rajat Chaudhuri is a bilingual writer working in English and Bengali. He is the author of the critically acclaimed works Hotel Calcutta (composite novel), Amber Dusk (novel), and a short story collection in Bengali titled Calculus. His new novel, The Butterfly Effect, a speculative work set in Asia and Europe, was published on 3rd September, 2018 (Olive Turtle, Niyogi). Chaudhuri is also the anthology editor and wrote the introduction for The Best Asian Speculative Fiction, a collection of speculative stories (science fiction, fantasy, horror and more) from acclaimed and fresh voices from fifteen Asian countries, including India. This book is being published by Kitaab, Singapore in October 2018.

Chaudhuri’s writing has won him a British Council administered Charles Wallace Creative Writing Fellowship, UK, a Hawthornden Castle Fellowship, Scotland, a Korean Arts Council-InKo Residency in South Korea, and a Sangam House residency. He has presented his writing to Indian and foreign audiences at cultural organisations, universities, bookstores and elsewhere.

Chaudhuri’s fiction has been noted for being “another kind of writing emerging within Indian English writing” (Indian Literature, Sahitya Akademi), and his storytelling skills in books like Hotel Calcutta have been commended by publications like The Asian Review of Books (Hong Kong), calling him “a persuasive artist … invites a hungry urgent reading” and The Telegraph mentioning “his sheer power of storytelling”. Adjectives like “astounding, dazzling, heady and memorable” have been used by critics writing about his books in publications like Indian Literature, The Telegraph, Sunday Guardian, and others. Chaudhuri has been a judge for the Asian English Olympics Storytelling competition organised by BINUS university, Indonesia, for two years in a row. Earlier he won a Wordweavers prize for his short story, and the urban milieu of his stories and the East-West crosscultural themes have been praised by noted academics like Sanjukta Dasgupta and Amitava Roy.

His book reviews, essays, fiction and other writing have appeared in Outlook Magazine, American Book Review, Asian Review of Books, The Telegraph, Scroll.in. Eclectica, among others. Chaudhuri has been a climate change advocate representing developing country civil society groups at the United Nations (New York), and he has published and spoken on environmental issues at national and international fora including the United Nations HQ. He is a past contributor to the United Nations World Human Development Report (UNDP, New York). Trained in economics, he has worked for international civil society groups and for a Japanese consular mission in his home town, Calcutta. Chaudhuri is a full-time writer and a freelance editor and sometimes advises civil society groups. He is currently working on a climate change novel and translating a non-fiction work about Calcutta from Bengali to English. He has taught a popular online short story writing course last year to the students of BINUS university, Jakarta, Indonesia.