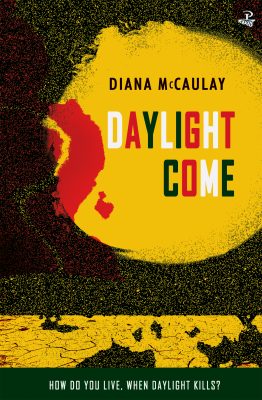 This month we travel to a fictional island in Jamaica–Bajacu–to talk with author Diana McCaulay, whose novel Daylight Come was published in September 2020.

It is 2084. Climate change has made life on the Caribbean island of Bajacu a grueling trial. The sun is so hot that people must sleep in the day and live and work at night. In a world of desperate scarcity, people who reach forty are expendable. Those who still survive in the cities and towns are ruled over by the brutal, fascistic Domins, and the order has gone out for another evacuation to less sea-threatened parts of the capital.

Sorrel can take no more, and she persuades her mother, Bibi, that they should flee the city and head for higher ground in the interior. She has heard there are groups known as Tribals, bitter enemies of the Domins, who have found ways of surviving in the hills, but she also knows they will have to evade the packs of ferals, animals with a taste for human flesh. Not least she knows that the sun will kill them if they can’t find shelter.

Diana McCaulay takes the reader on a tense, threat-filled odyssey as mother and daughter attempt their escape. On the way, Sorrel learns much about the nature of self-sacrifice, maternal love, and the dreadful moral choices that must be made in the cause of self-protection.

Mary: Thanks so much for the talk with Dragonfly! How did you get started in writing?

Diana: I’m a Jamaican writer, resident on the island, and I’ve written all my life, but mostly in secret. Reading is what got me writing. I loved books and stories as a child, and I wanted to move people I would never meet with my words, as I had been moved. I’ve always had stories in my head. My father encouraged my writing as a teenager, gave me books, and talked to me seriously about them, but when I declared I wanted to be a writer, he told me women could not write literature because the only suitable subject was war – and women did not go to war. I believed him, so until I was past fifty, I didn’t send out my work, often didn’t even finish it. Then I had a health scare and realized that if I were to hear I was terminally ill, the only big thing I would regret about my life was not publishing a novel. So I completed my first, Dog-Heart, sent it out and it was rejected 12 times. Peepal Tree Press, still one of my publishers, said yes, and Dog-Heart came out in 2010. I’ve written five novels in all. My second was Hurcan, also published by Peepal Tree Press, Gone to Drift, published by Papillote Press and Harper Collins US, White Liver Gal, which I self published as an experiment–not, I would say, a successful experiment. Everyone needs an editor! My most recent novel is Daylight Come, published by Peepal Tree Press in September 2020. I also have a day job as an environmental activist. I’m the founder and director of the Jamaica Environment Trust, which is 30 years old this year. I’ve been an opinion columnist for our main daily newspaper, The Gleaner, and have also written and published many short stories and articles.

Diana: Daylight Come is set in 2084 on the fictional Caribbean island of Bajacu, where it has become too hot to go outside in the day due to the climate crisis. So everyone works at night and sleeps in the day, but my protagonist, a 14-year-old girl named Sorrel, can’t sleep. She convinces her mother, Bibi, to leave the known difficulties of the capital city of Bana to travel to the mountains, where Sorrel believes that temperatures must be cooler, and it’s rumoured that tribes of people live together in old and more satisfying ways. Daylight Come is a fast-paced, threat-filled adventure story, as well as a story about the changing relationship between a mother and a daughter, as they face many dangers together and must consider what each of them is willing to sacrifice. As for the audience, I’m convinced that the climate crisis needs stories, because talking about the science has not had sufficient impact, and although I’ve read quite a bit of climate fiction set in large countries, I wanted to write about how this could play out on a small tropical island. So Daylight Come is for Caribbean residents, visitors, and the Caribbean diaspora, adults, and young adults, as well as everyone interested in and concerned about what the climate emergency might do to our societies. It’s not a polemic, though; hopefully it’s a powerful narrative of interest to anyone who likes a good story.

Mary: Can you describe the ecological themes in your novel and how you were inspired to write about them?

Diana: Three years ago now, when I first started thinking about Daylight Come, I was in the UK and read a story about construction workers in the Middle East falling from scaffolding due to the heat. When I came home, I started noticing how many people worked outside–farmers, security guards, policemen, traffic wardens, people selling in markets and on the streets, construction and road workers–and I thought, huh, suppose all of this wasn’t possible for most of the year? What would life be like, in a place like Jamaica? My premise is that human civilization evolved in a stable and nurturing climate, and without that, everything we take for granted is under threat. I’m also interested in the human impulse to acquire materials things–and Daylight Come explores that a little bit–how easily we get used to comfort and plenty and seek more and more and more.

Mary: What has been the reaction to your book, and are you able to do many book fairs or talks during Covid-19?

Diana: I’ve done quite a few online events–talks, panel discussions, a launch, book clubs, readings, interviews and so on, but Daylight Come was released last September, and due to the pandemic, travel and in person events were impossible. It’s never been easy for someone like me, writing outside a major literary market, to promote my books, but the current situation is really daunting. The most common thing I hear from readers is that they couldn’t put the book down. They like how fast paced it is. A few people have asked me if it was depressing to write, and my answer is no, it wasn’t. As Rebecca Solnit says, the future is not yet written, and the outcomes I describe in Daylight Come are not inevitable. We humans can, if we decide to, build different and better societies. I also get asked if the things I describe in my book could really happen, and all of them have already happened–not everywhere, but somewhere. It is very hard to market a book in the pandemic. There are so many online events now that it’s hard to get attention. Distribution is also a challenge: you might market, and then apart from e-books, your book is just not available.

Diana: Yes, I’m working on nonfiction memoir called That Woman, which is about the intersection of my environmental journey and my ancestry. I’m the descendant of a Portuguese Sephardic Jew who came to Jamaica in the late 1700s and had nine children on the island with an enslaved (and therefore raped) West African women, but I have light skin so I’ve been racialized as white. My male ancestor was born a slave but went on to enslave others. It’s the most challenging thing I’ve ever tried to write.

Mary: Thanks so much for sharing your story, Diana. 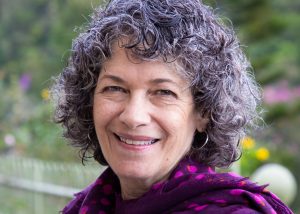 Diana McCaulay is a Jamaican writer and environmental activist. She has written four earlier novels, including Dog-Heart (2010) and Huracan (2012), published by Peepal Tree Press. Both books met with critical acclaim and have broken local publishing records. Her latest novel, Daylight Come, was published in September 2020.

She has lived her entire life in Kingston, Jamaica, and has engaged in a range of occupations – secretary, insurance executive, racetrack steward, mid-life student, social commentator, and environmental advocate. She is the founder and Board Chair of the Jamaica Environment Trust, and has received many awards for her environmental work, including the Ewan P McFarlane for Outstanding Environmental Leadership, a Bronze Musgrave Medal from the Institute of Jamaica, and National Honours, the Order of Distinction (Officer Class).

Dog-Heart won a Gold Medal in the Jamaica Cultural Development Commission’s National Creative Writing Awards (2008) and was shortlisted for the Guyana Prize (2011), the IMPAC Dublin Award (2012), and the Saroyan Prize for International Writing (2012). Huracan was also shortlisted for the Saroyan Prize 2014. Her short fiction has been widely published and her story “The Dolphin Catcher” won the Commonwealth Short Story Regional Prize in 2012.