In Memory of a Banyan Tree by Michael Rothenberg (Lost Horse Press, 2022) 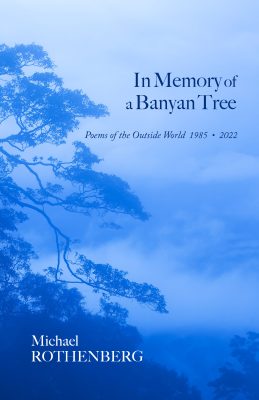 American poet Michael Rothenberg’s newest collection of poems travels backward and forward on an important journey, encompassing poems written between 1985-2022. The reason I say forward is that nowadays writers speculate more than ever about the state of our planet and where it’s headed. The nature of this collection covers eco-poetics of all types, whether orchids, trees, sea turtles, or climate “strange”.

The background of this poetry started much earlier than 1985. Rothenberg told me a story of how when he was 17, living in Miami Beach, he read Michael McClure’s Meat Science Essays, which turned him onto ecological thinking and got him thinking about how he could integrate his life and writing with nature. Much later, he opened a bromeliad and orchid nursery in California (Shelldance Gardens). Turns out that one day McClure visited, and a lifetime friendship began. Joanne Kyger also visited, and Rothenberg became close friends with her too, forming a dear connection based upon the outside world.

All his life, Rothenberg has been part of the world around him. Six years ago, he moved from the California Redwoods to a house on Lake Jackson in Tallahassee, Florida. He now watches a new subtropical world flit around him: lily pads, lotus, hyacinth, gallinule, largemouth bass, the changing light in the water, and all kinds of birds and turtles and snakes and wildflowers. He writes what he lives, what he sees, what he soaks in.

The solastalgia in these pages will make us pause and take more notice of our natural surroundings, allowing us to delight in it more, embrace it more, protect it more. Rothenberg eulogizes a dusky sparrow, dahlia, bromeliad, blue jays, and a little plump brazen toad. He writes poetic journals at times, a literary technique inspired by Japanese poets, Beat poets, and Objectivists; it combines poetry with daily reflections. “Seven Days in Darien” is a good example, as is “Gray Days”. Every poem strongly observes something about our physical landscapes; joy escapes at the thought of a water moccasin, spiders, dolphins, alligators, salamanders, grasshoppers, everything, woodlands, oceans, a disappearing lake, seasons, silence, time, ends of our world. Like poet Gary Snyder did once upon a time, Rothenberg begs us to know our nature.

In Memory of a Banyan Tree is an aria sounding within a chorus of other eco-poets. It speaks loudly and with fervency, celebrating the natural world around us and calling for its preservation. It exists on a continuum of fascinating nature Renaissance poets such as Michael McClure, Joanne Kyger, and Gary Snyder—but Rothenberg has his own vision and voice. The Banyan Tree poems comprise not just a collection across time but one of personal experience, humor, sorrow, and  fierce observation.