A lot of stuff has happened since last month. Between May and June, the black flies have come out in big numbers. Crickets began to sing at night–a sound that I love and which I grew up with but never heard during my years on the west coast, so it’s wonderful nostalgia. Sometimes I just stand at the window at night, listening to the sound of crickets. Morgan thinks he also heard frogs the other night. We realized we have thousands of wild strawberries growing in the yard. Everything is wild back there (we’ve only mowed part of the front yard and an area around the gardens). With so many things coming out, coming to life, I’ve updated the list of flora and fauna at the end of this article. These are only things we’ve observed. I’m sure that there’s tons more stuff. It’s wondrous to see this meadow growing wildly out back, behind the rose gardens (some of the roses are just starting to come out, but not that many quite yet).

Our biggest project this month was the planting of trees. We received 28 trees at the end of May: various oaks, sugar maples, hackberries, black walnuts, butternut, plums, and sour cherry trees. They were all wrapped in one bundle, and we wanted to get them planted right away. The trees were not potted but with their roots in place. Most were 3-5 feet high, some with leaves or buds. Tree-planting was a process. First, we learned that we had to look at our soil. If it had a lot of clay in it, we’d need to aerate the soil and plant on top the ground surrounded by a foot of soil and mulch. We also had to stake the trees to help them survive in the winter. The soil had a lot of clay, so we could not plant the trees in the ground; otherwise, they would drown as clay soil acts like a bowl with little drainage. By the time  the trees arrived, we already had the stakes down and had, like the nerds we are, made a fancy Excel chart showing the layout…we had gone out and staked the trees out by foot, because the larger trees had to be planted thirty feet apart.

The area for planting these trees is in the back yard, which is slightly over an acre. One half of it already has rose, other flower, and vegetable gardens as well as wild grapes, various trees, and other ground cover (wildflowers and grasses). The last 1/3rd acre is a meadow and had nothing much on it except a flagpole with a hole, where evidently the old residents played golf, and a bonfire area. We thought a lot about what to do with this empty meadow. We decided to use the money my old workplace gifted me, when I resigned, to buy trees. We wanted a shady area where we could perhaps someday tap sugar maples for sap and who knows what else. I wanted oak trees too, one of my favorite trees. We wanted some hardwood trees and more fruit trees. We envisioned pitching a tent back there, maybe building a gazebo area (we have one out front, but it’s square and not the round kind I’d love!). 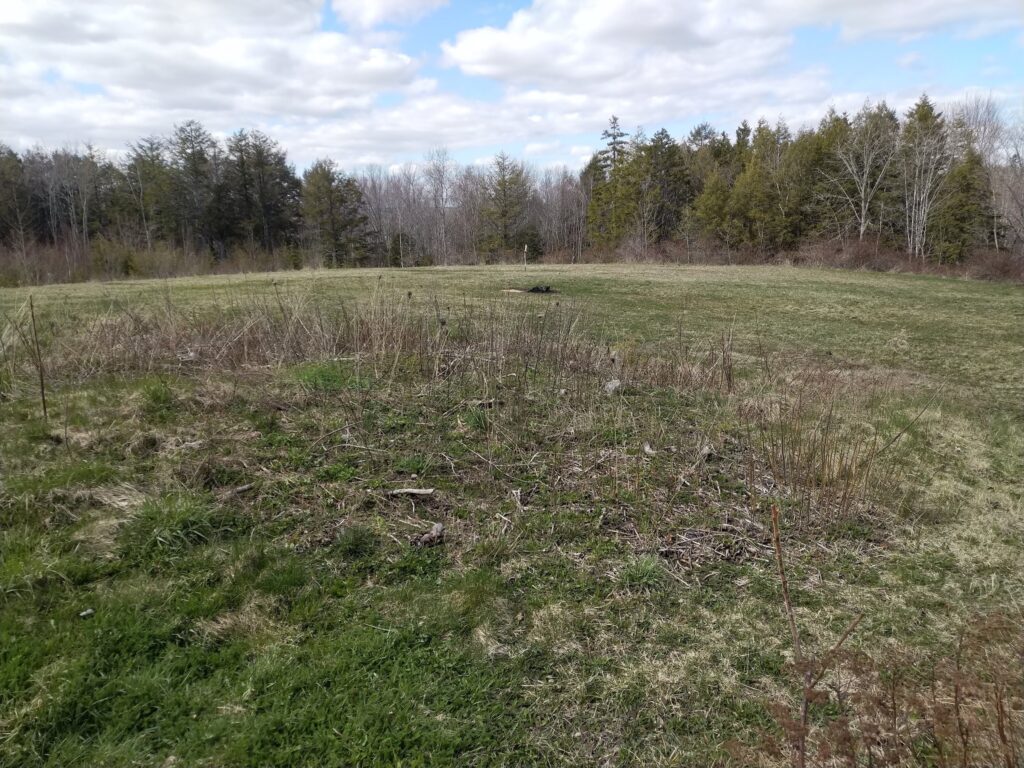 Photo of the back 1/3rd acre before we planted trees

So, we had the trees staked, planned, and put labels on the stakes. The next part was aerating the soil so that the roots could reach into the soil. We first tried with a pitchfork that we use to turn our compost, but the ground was so hard. Even if I jumped on the pitchfork it would barely budge. Some areas are rocky. Turned out that a pick axe worked pretty well. That’s the first time I ever used a pick axe at all, much less swinging it overhead as if I were chopping wood. It gave me a weird sense of purpose, and I did the pick axe while Morgan went to do other tasks.

Then, we brought 30+ wheelbarrows of soil, with blueberry compost, down to the trees. We had to build a mound of soil a foot tall and foot out to surround each tree. We had six yards of soil at the end of the gravel drive, which goes slightly past our garage. It was a lot of work shoveling dirt into a wheelbarrow and then taking it down to the trees. The yard back there is more than an acre, so to get to the very back was a forearm workout! Morgan and I took turns shoveling/pushing the wheelbarrow. Once that was done (and this was all in a day’s work), we added mulch to the soil (a bunch of old leaves at the back of the yard). Morgan did the actual planting because I stopped tree-work in order to plant more veggies in my second garden bed. Then we had to water each tree at least five gallons. That took about two more hours. We have three 100-foot hoses that almost reach to the back yard, but three of the trees are unreachable by the hose, so we just fill up a bucket with water for them. By now we were exhausted, and the sun was starting to sink. But we knew deer were coming into the yard, so we still had to build 28 cages to prevent the deer from eating the bark or buds of the new trees. It was okay to just cut and wrap a piece of chicken wire around the smaller trees, but for some taller trees with buds, we had to be more elaborate. The whole day was warm, and black flies were out, so we had to wear long pants, long sleeves, gloves, and a hat and net. It was very humid and uncomfortable. Morgan wore his  Garmin watch (which he used for running), and it noted he had burned 3,000 calories that day. As soon as I came in, I spoiled myself with a bath and glass of Rioja. Okay, more than a glass, but who’s counting.

Of course, there’s always work to be done around here, but that day was our hardest. It was also rewarding, and we’ve spent more days continuing to water and build mulch around the trees. Today we ran a bunch of trimmed branches through a new wood chipper and used that to make new mulch. 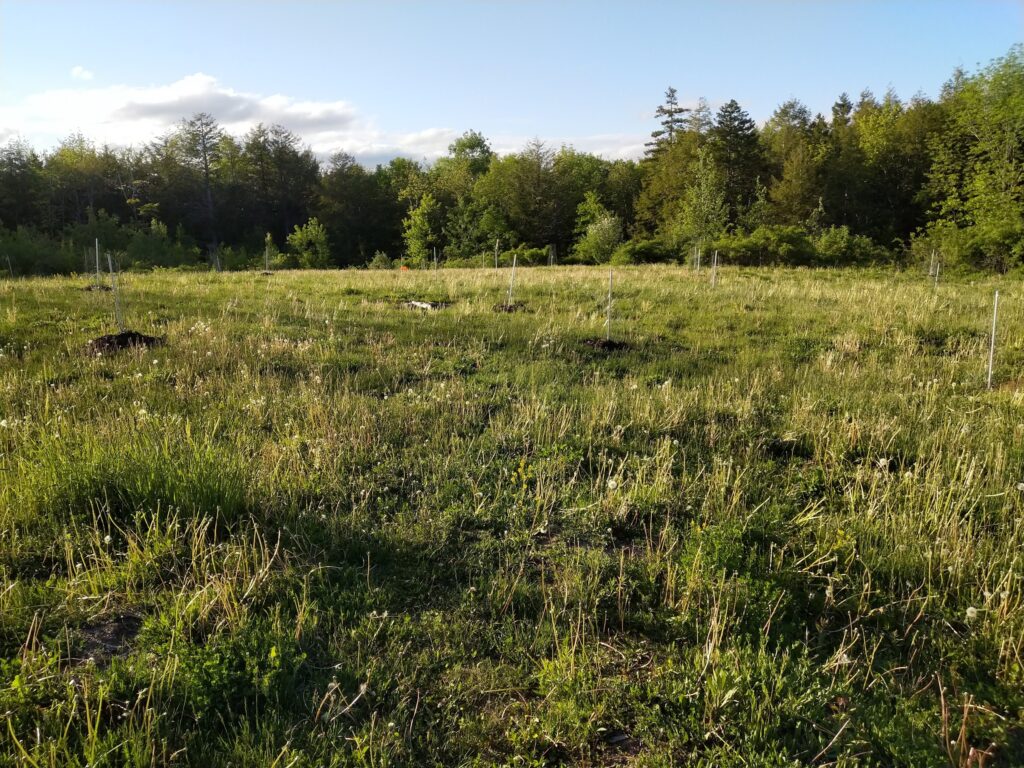 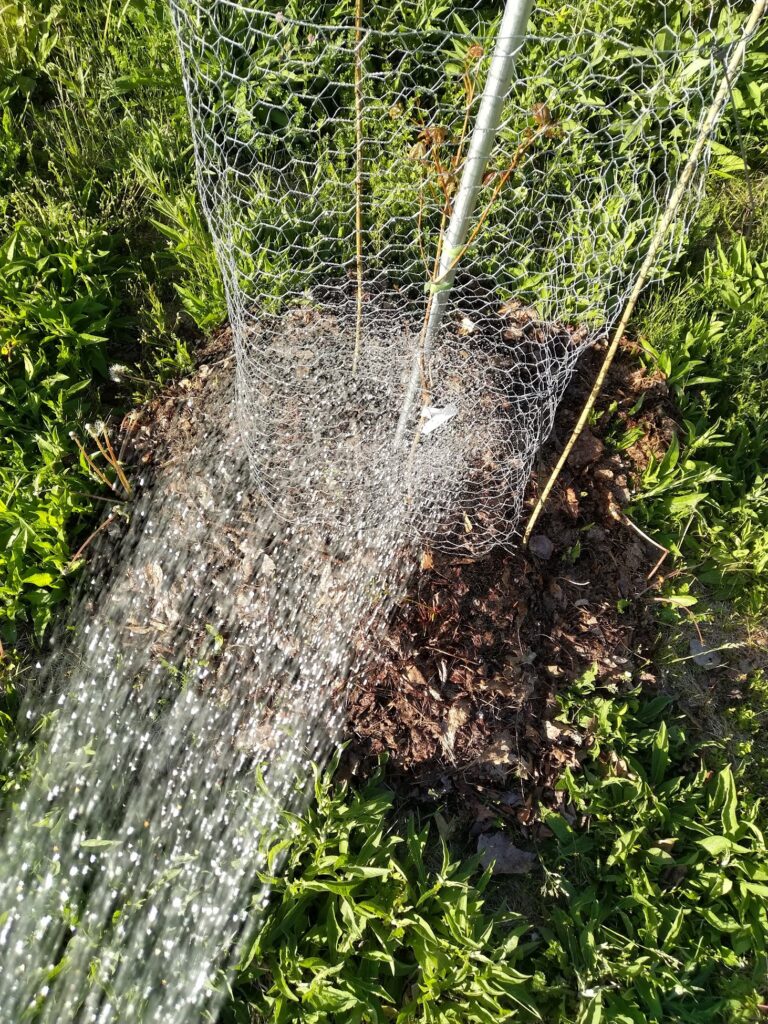 Tree up close (I think this is one of the sugar maples), as I water it

I began this wildlife series with the idea that I’d tie it into writing, and when I am out watering trees, especially, I start daydreaming about the fiction I’m working on. It reminds me of running, where I’d daydream and writing ideas would come to me. I still have a novella coming out this fall and two other novels in progress. I think what being outdoors does for me, especially now, when it’s not just for pleasure but actual work, is that there’s a new sense of accomplishing something, especially that will lead to food sources, with the gardens and the fruit trees. So lately I’ve been thinking a lot about how this lifestyle brings me back to earlier days, like when my grandparents always had a big garden and pretty much lived off the land. We’re not quite that tied to the land as they were (they also had animals), but, as always, being out in nature inspires me quite a bit. It’s also rewarding. I dream of someday being able to rest in the hammock below one of the oak trees we planted or try to tap maple syrup for the first time. I’m hoping this year I can can tomatoes and dry a bunch of beans for shucky beans; but who knows…the growing season is so short here and so far the veggies are not even too tall yet. Maybe next year I’ll need to build hoops over them. Working outside in this beautiful area motivates me to include similar settings in fiction. Who knows what my next novel will be (other than the two I’m working on now).

A bamboo wind chime to ward off any deer sneaking up to the garden area. I also have a solar light with a motion sensor out there (not pictured). 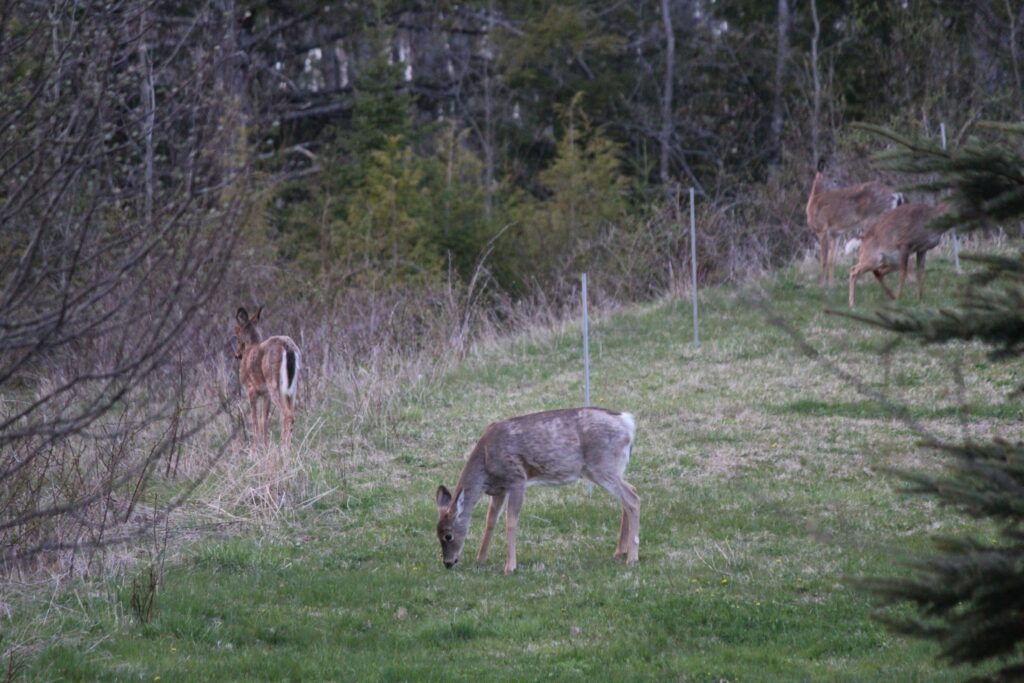 Speaking of deer, here’s our back yard before planting trees but when the stakes were up 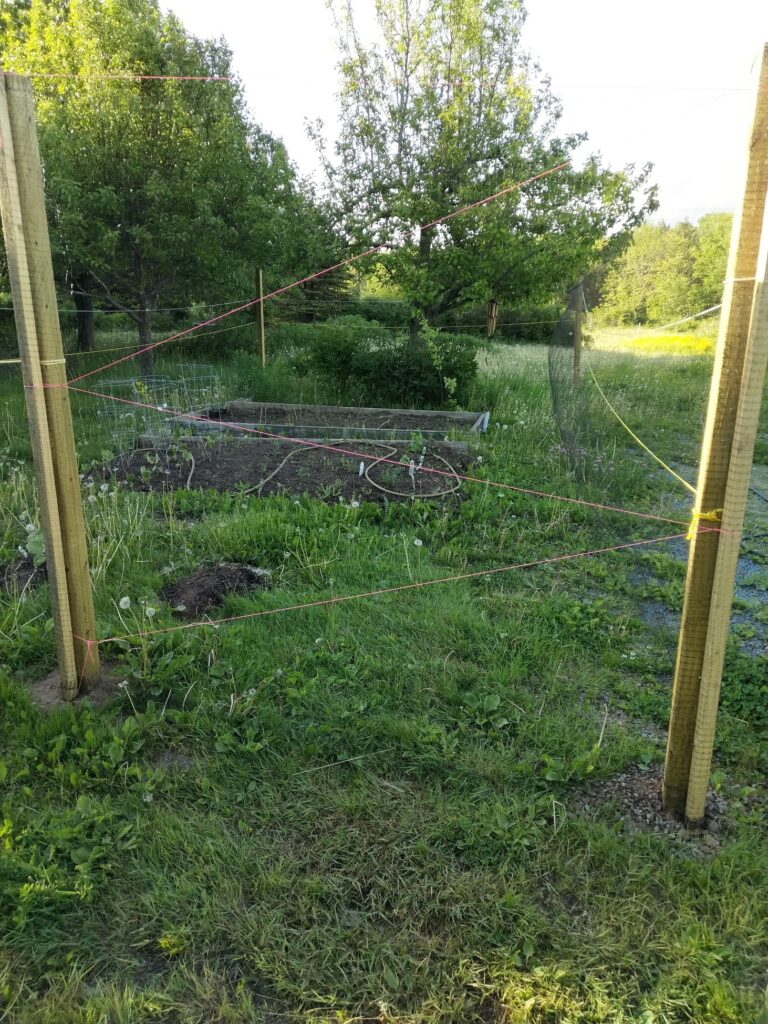 Two veggie garden beds in the front and a flower bed in the back. A deer fence surrounds them. Deer won’t typically tear down fences, but Morgan put colorful rope up so they wouldn’t accidentally come through the fence. 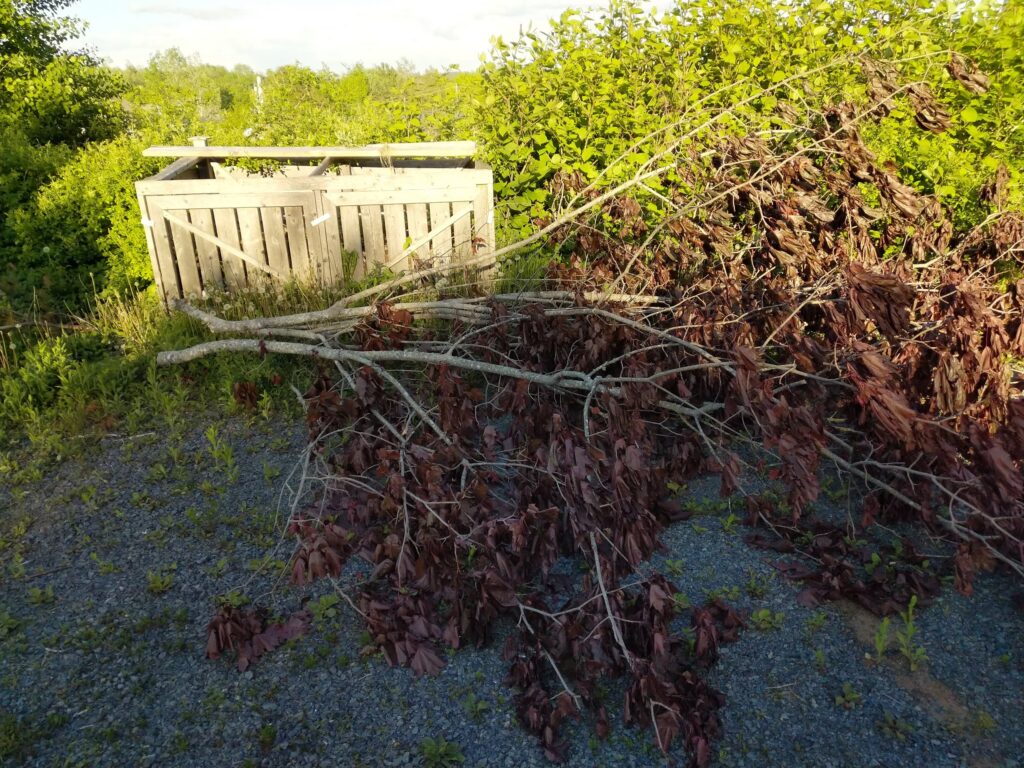 Here’s the compost bin with a red maple tree we had to cut down due to it blocking sun where our solar panels will be installed (which are coming this week!). We mulched this baby up today, and it went on our newly planted trees. Nothing is wasted. 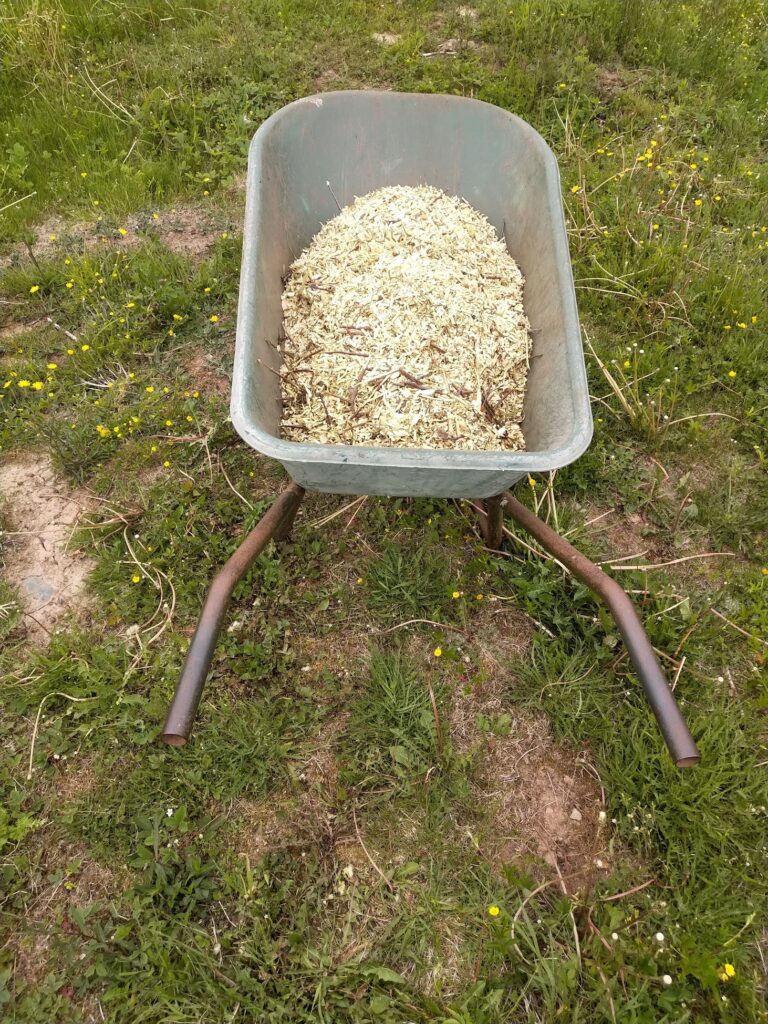 Getting mulch ready to add to the newly planted trees 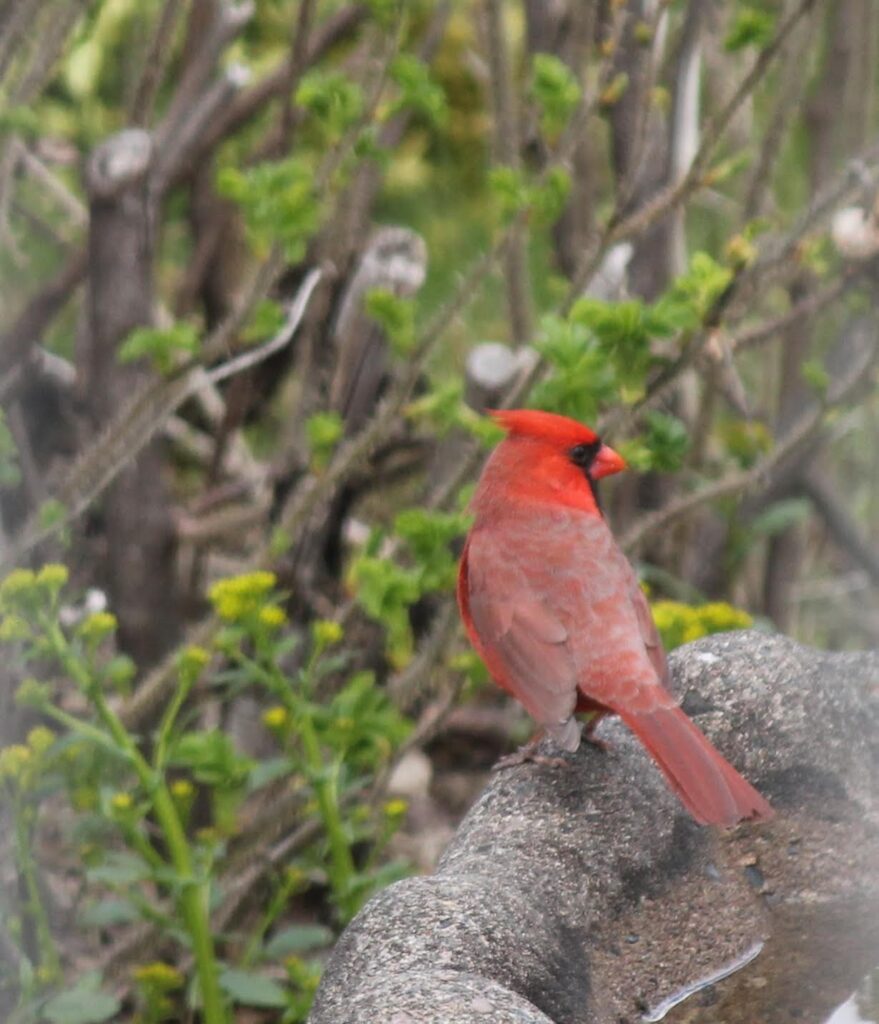 Cardinal out back on one of the bird baths 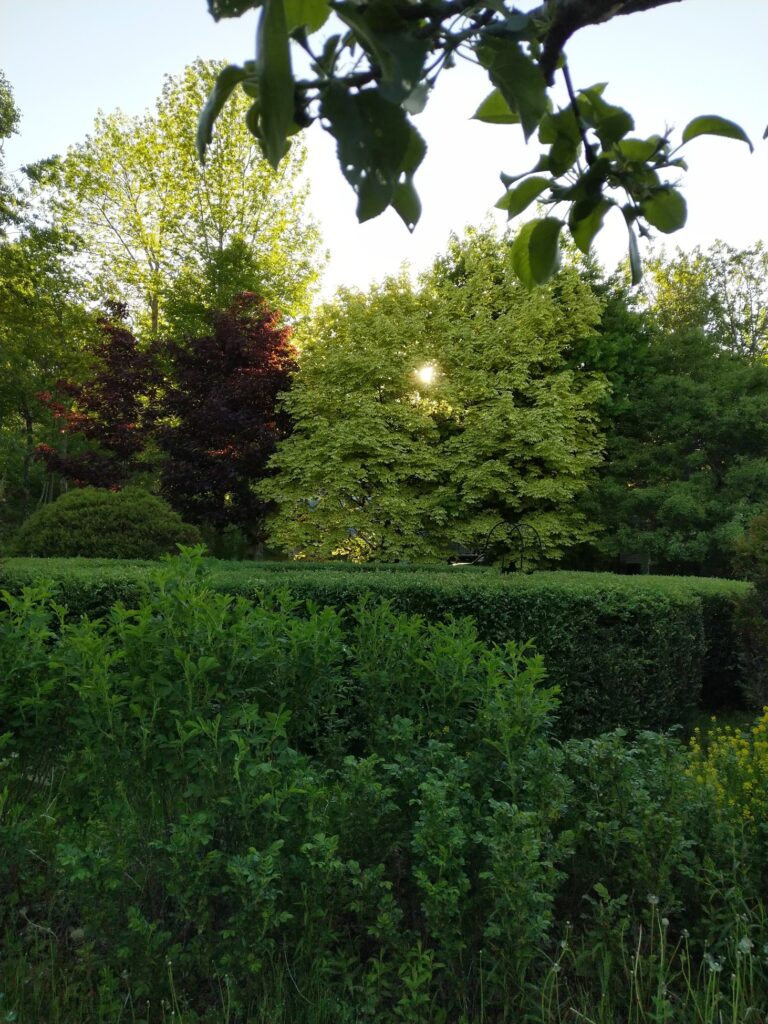 The beautiful sunlight late in the day

We have not identified about half the stuff in our yard, and of some things we have begun to identify (particularly mushrooms, moths, butterflies, etc.), we need to figure out the species. Here’s an update to my identification list from last month’s post.