I’m very happy to return to the “Women Working in Nature and the Arts” series with D.M. Cameron, whose novel Beneath the Mother Tree (MidnightSun Publishing, 2018) was recently posted at Dragonfly.  Donna writes radio plays, film scripts, and novels and has received many awards. As with other women in this series, Donna’s work in nature goes beyond the written word. Living in a 1940s cottage by the sea, the perfect backdrop for writing, she loves bushwalking and gardening. She is also concerned about the place she grew up and the violent times of Australia’s Quandamooka area during colonisation. Our conversation follows. 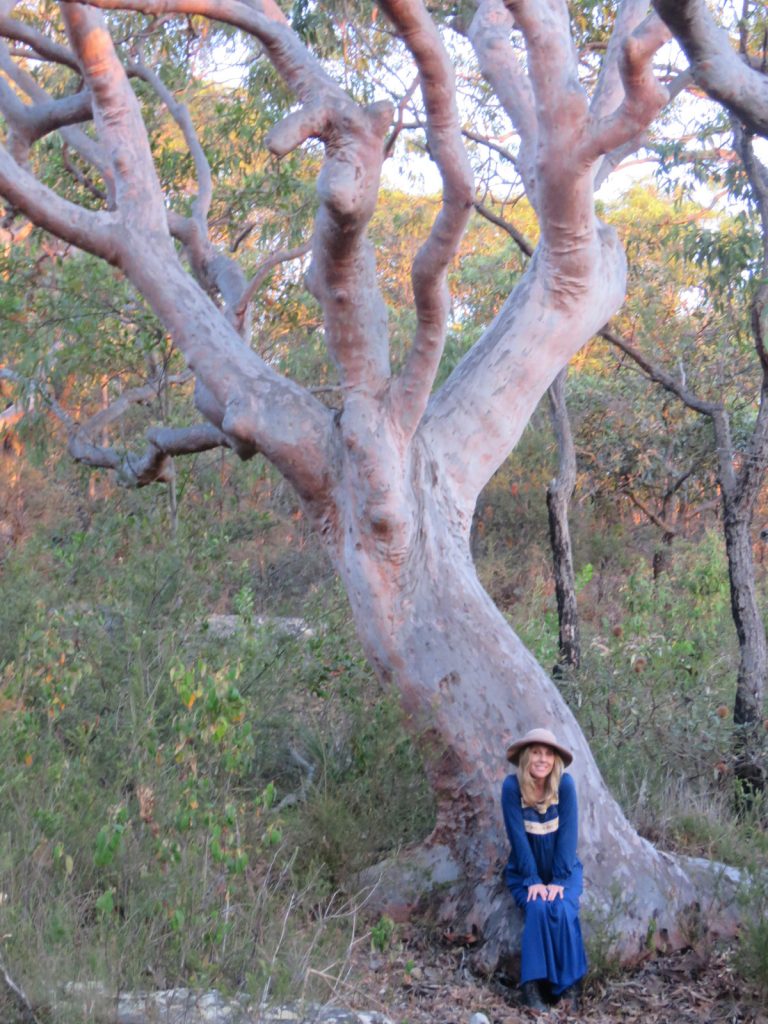 Mary: We first got in touch with each other when talking about your most recent book, Beneath the Mother Tree—a book excerpt is here. Can you tell us more about this novel and what led you to write it?

Donna: Beneath the Mother Tree is a spine-chilling mystery played out in a wild Australian setting. Wrought with sensuousness, it combines Irish mythology with Indigenous history and is filled with quintessentially Australian characters who will take you on a dark and dreamlike journey into what it means to belong.

The idea for the book sprang from the fact that I am a fourth and fifth generation Australian of mainly Irish descent, but I grew up in the Quandamooka area in Australia, which has a strong Aboriginal presence, mainly due to the fact that there was a mission on one of the islands for over fifty years. As an adult, I became haunted by a question that I had subconsciously been asking myself most of my life, a question I feel many non-Indigenous people in colonised countries wonder about. ‘How should we connect to this landscape when our ancestry is from a completely different country?’ Many of us are, after all, aliens in the only home we have known. On reflection, I think this was what I was doing in the writing of Beneath the Mother Tree–examining my own connection to country through the form of a fictional story, in the hope that I would find an answer to this question. What I didn’t expect to uncover was the awful, violent history that had occurred in the Quandamooka area during colonisation, and how this has irrevocably impacted upon the Aboriginal connection to their homeland. All of this somehow came together in the form of a page-turning, contemporary murder mystery and coming-of-age love story.

Beneath the Mother Tree BOOK TRAILER from donna cameron on Vimeo.

Mary: You’ve also written screenplays. Can you share your experiences with plays and other books?

Donna: Yes, I have written a couple of short films that were lucky enough to reach production. I am by trade a script writer, which I fell into by default because I was already working in that industry as an actor. But I often heard in prose and would be forced to ignore that voice to write a scene in pure dialogue, so I sometimes wonder if I should have been writing novels from the start. I wrote several stage plays and went on to write radio plays. I think my work did particularly well on radio because, through merely switching the recording technique, one can seamlessly slip from dialogue into interior monologue or third person narration, which is what occurs in a novel. But it was landscape that finally drew me to the form of the novel. Beneath the Mother Tree sprang out of a familiar and beloved landscape, and the characters are defined by the landscape. The same creative process is occurring in the next book. The novel, I feel, is the most powerful form for exploring landscape in words. 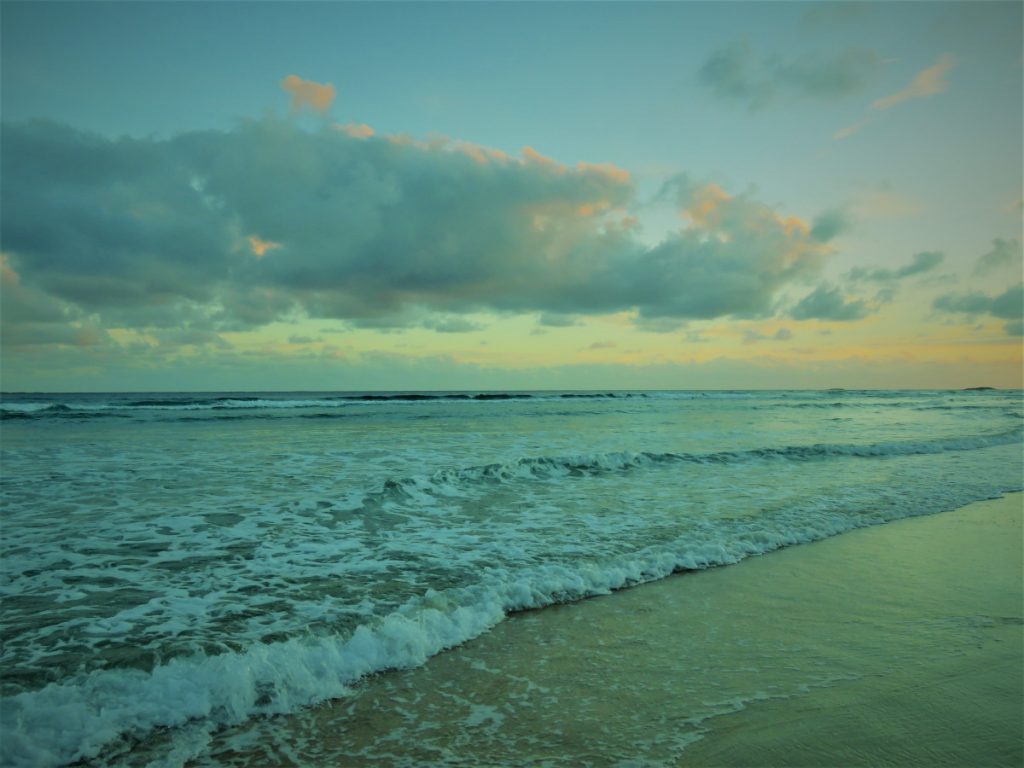 One of the many beaches in the Quandamooka. This one is on Minjerribah island (otherwise known as North Stradbroke).

Mary: How does the natural world play a part in your writing?

Donna: The natural landscape…or indeed, nature, has always played a significant role in my life, particularly trees. One of my earliest memories is playing under my favourite tree in our back yard–a weeping willow, which I would pretend was my house for hours on end. The drooping tendrils of the willow became the walls of my house. I was quite a sick, asthmatic child who spent time in hospital with a collapsed lung when I was ten years old. It was during this prolonged stay that my grandmother sent me The Secret Garden by Frances Hodgson Burnett, which is a story about a pair of sickly children who form a friendship and become healthy by spending time in nature and hanging out with a local village lad who is at one with nature. That book affected me on quite a profound level. Not only did it turn me on to reading but it solidified the belief in me that being out in nature, being amongst the trees and plants and birds and creatures, could be healing on many levels. A sense of this deep love of nature is captured in Beneath the Mother Tree. In fact, one could say that nature, to a certain extent, controls the action. Upon reflection, I realised that through the writing of the book, I immersed the characters within the natural landscape of the setting in the hope that the reader would come to love and respect this aspect as much as I do. I have grave fears for the plants and creatures of this planet at present. Beneath the Mother Tree is a love song, in a way, to the landscape and creatures who played such an important role in forming who I am today. The Australian Aboriginal and Torres Strait Island people believe that the Earth is our mother. We must tread lightly on her, care for her because she is our sustenance. If she becomes ill, we become ill. This is such obvious wisdom, yet look at the mess we find ourselves in today. 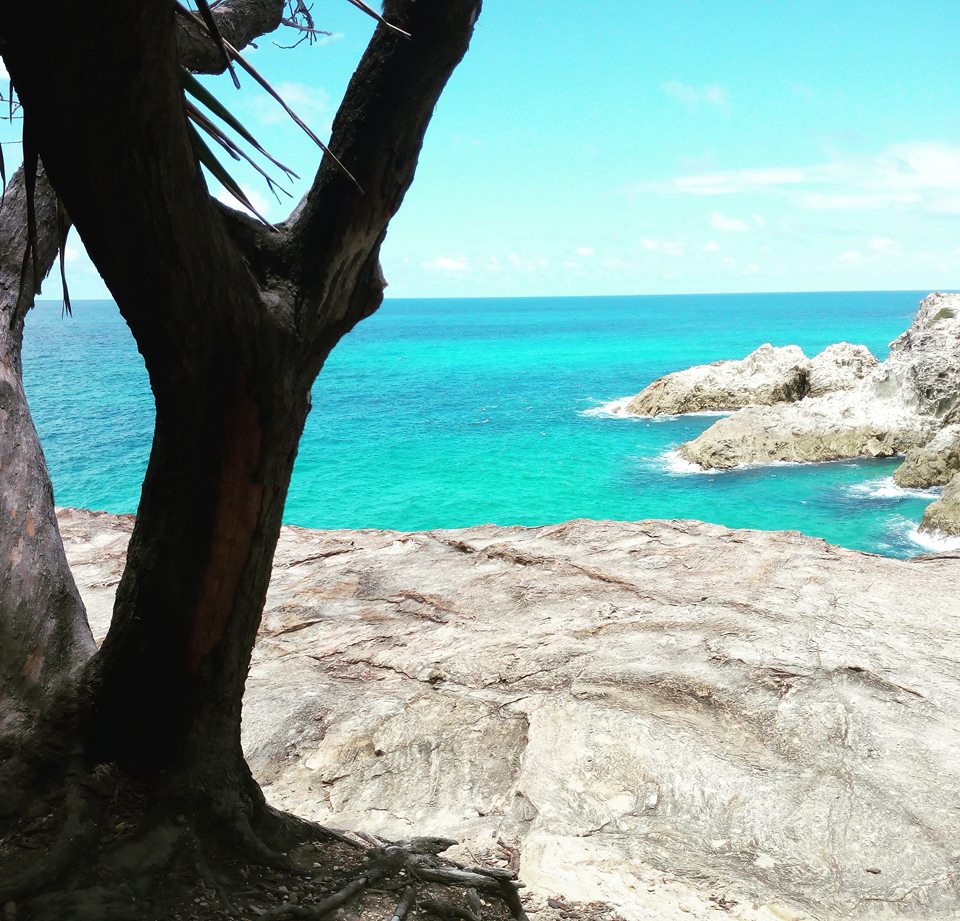 Another shot of Quandamooka country – where Beneath the Mother Tree is set.

Mary: I read that you live in a 1940s seaside cottage near a national park, which is like a dream of mine! What’s it like, and does this setting lend to your writing?

Donna: We have the still water here on one side and the surf beaches on the other with a national park running through the whole area. The trees are mainly tea trees, angophoras, spotted gums, black butts and banksias. There is a marine national park also, and we often have stray visitors from the Antarctic come visit, leopard seals, fur seals, whales, etc. As you can imagine it is a veritable paradise. The only down side being you need to enclose your vegetable garden and fruit trees because otherwise the abundant wildlife help themselves at will. The many birds, such as cockatoos, king parrots, galahs, rozellas, and the possums, bandicoots and echidnas–all think my vegetable garden is theirs. The book I am currently working on is partially set here, before the characters end up on a road trip, so I am going through the wonderful process of learning all the correct names for each of the plants, birds, fish, etc., who have made their way into my story. There is endless inspiration within nature, and I always find that a walk through the national park or down to the beach recharges me if the writing begins to fail. 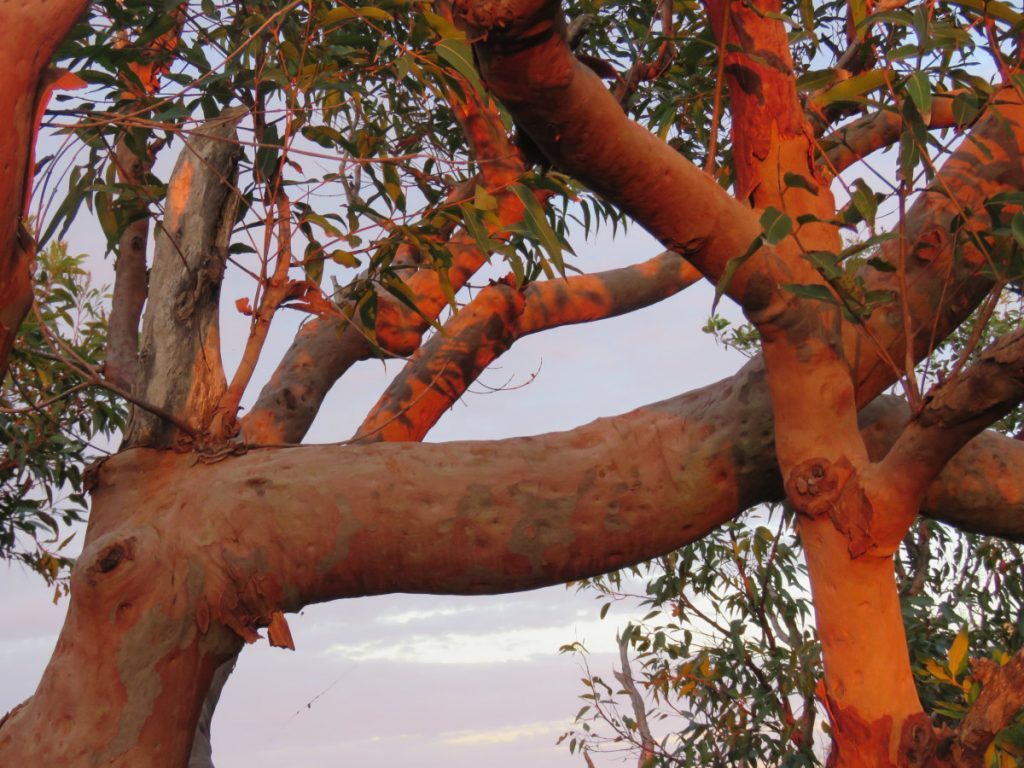 Mary: What’s a typical day in your life like?

DM: I work on a call-in basis as a Drama/English teacher at the local high school here, but the days I am not called in, which are thankfully many, I like to start the day with a walk, once I ensure my teenagers are on track to getting out of the door in time for school, etc. I make sure I walk alone, without listening to music or a podcast, and I try to keep bringing my mind back to the book I am working on, so it is almost like a walking meditation with my fictional characters. If I do this, by the time I get home I am full of ideas to jump into the manuscript and keep working. I usually try and work quite solidly until 2:30/3 pm, when I check emails, social media, and so on. I have tried to become disciplined with this, because all those distractions invade the mind space too readily. If the writing is not flowing or I am finding it hard to stay focused, I set a timer for half an hour, and do half hour sessions. I find this is a nifty little trick into focusing my mind. Sometimes if I get stuck in a plot knot, I will leave the keyboard and go outside with a pen and paper and hand write for a while. Or lie down and meditate on the problem or characters…often in that half dream-like state, the idea or fix will come. On the days I am called into work or need to travel to give author talks, I try to at least ‘check in’ with the work at some point during the day. I think for me, it is important I keep contact with it every day–even if it is a couple of sentences that come, or a character trait…just so it is always bubbling along. I always have a notebook on hand. If I break from the work, it can take days for me to find myself immersed in it again. The trick for me is immersion. 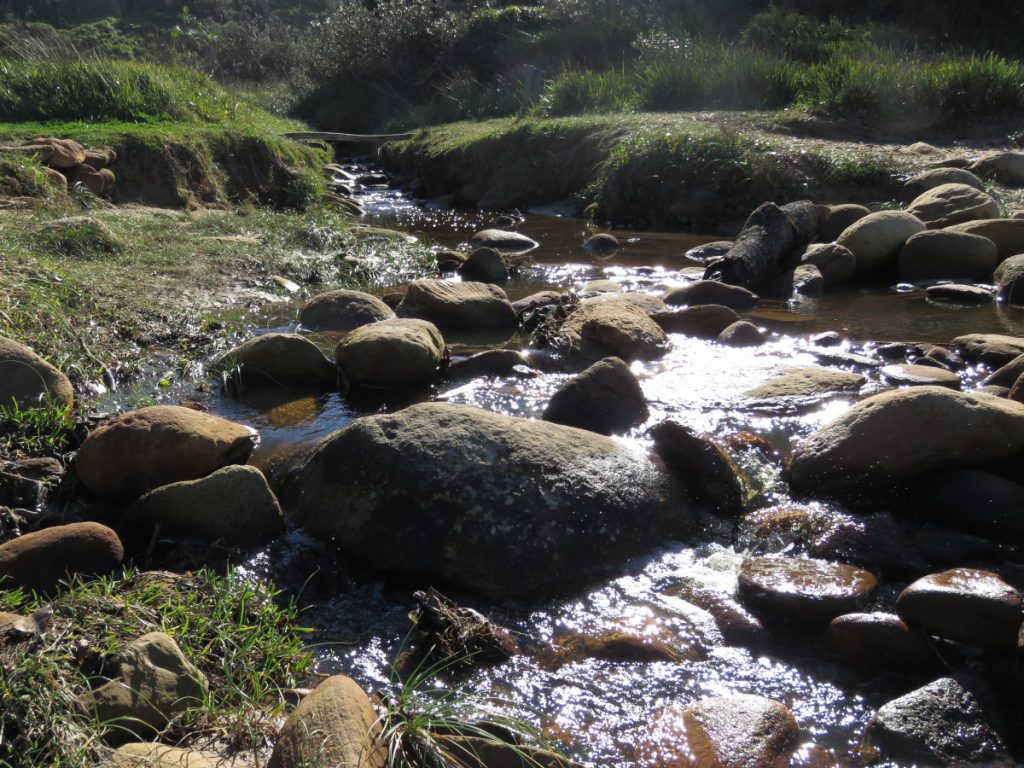 One of the many local beaches scattered throughout the national park near where Donna lives.

Mary: On your biography at your site, it says you love bushwalking. What are some of your favorite places to hike?

Donna: In Australia, I am lucky enough to hike through national parks here on the eastern coastline on a regular basis, but walking around any of the islands in the Quandamooka area where Beneath the Mother Tree is set is pretty special too. I have also had the privilege of hiking in the Himalayas of Nepal a couple of times, and that was spectacular I have to say. I will let the photos speak for themselves. 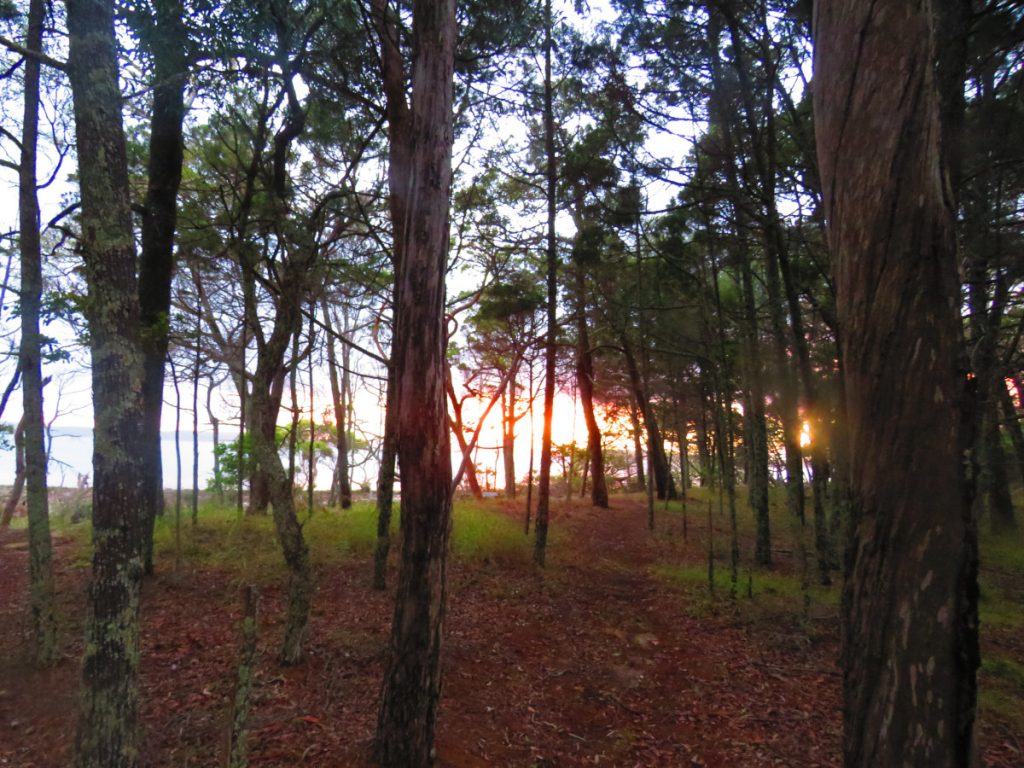 Donna: The book I am working on at present examines the idea of hope in the face of climate change. The more research I do on climate change, the more frightened for the future I am becoming…and utterly heartbroken that the political leaders of the world are not taking immediate action now. So I suppose you could say I am writing from my heart, exploring the thing that is keeping me up at night…trying to find the hope. I am making it all sound very dry and dire. It is actually a thriller, road trip, love story, edge of your seat kind of ride while dealing with an issue that is of the utmost importance as we head towards the ‘roaring twenties’, which I have no doubt they will be dubbed.

Mary: Sounds interesting. Please let me know when it’s out–and thanks very much for letting us know about your life in Australia, and your writing there.

Thanks to Donna for the beautiful photos.