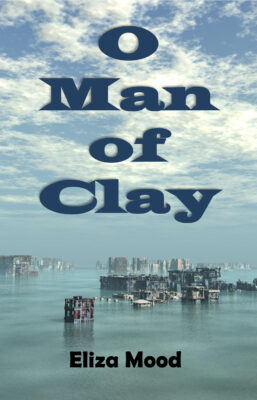 Ursula K. Le Guin once said that speculative fiction was more about the real world than we usually imagine, and that’s true when it comes to authors writing about ecological devastation world-round. Eliza Mood’s O Man of Clay is such a novel that explores how climate change might affect North East England and parts of Siberia. While the setting is futuristic, the reader will find it uncannily familiar. O Man of Clay unfolds along an epic timeline, too, spanning space and time and all things in between, thus putting the modern world’s environmental problems in context. Though the novel deals with the hyperobject known as the climate catastrophe—a looming, hard-to-grasp concept—Eliza Mood manages the story in a meaningful, understandable, and poetic manner.

The interesting characters’ memories, histories, and futures are not linear nor neat and tidy but evolve with the illusions, narratives, and stories around them, which are found within science, art, Indigenous histories, religion, and other narratives. The author creates diverse characters via different lenses, including that of the religious conqueror, who wants to drill, frack, pipe, and dig more, and that of the artist and environmentalist wanting to counteract the resource extractor and polluter.

A tremendous amount of artistic agency is involved in this novel, through which flow theatrical, musical, and poetic waves. Eliza is a poet, on top of being a novelist, so perhaps such word play is no surprise. Descriptions are never expected nor cliché—quite the opposite. When reading this novel, I felt as though the author had developed a more immersive and in-depth language than most. Of course, plenty of local dialect and phrasings come into play, but so does a newly inventive lyrical polemic. Kennings run throughout. Why call something a ship when you can call it a wave-steed? But the novel also relates to storytelling in and of itself, which, perhaps a reader might argue, is one of a few frameworks from which this tale emerges.

The novel opens in Hartlepool, near midsummer, after a tsunami and ice melt have flooded the city more than usual, yet the new normal has already created a fascinating but haunted submerged city, where sidewalks and houses and businesses once stood. The colorful characters have different pasts and memories—some from other places—one from a line of herders, which brought to the story a wonderful look at ways of life that might make more sense than most—and others from different philosophical landscapes and physical regions: a religious leader; a mute girl who, like everyone else, is trying to find her way in a world where life is upended and new footing is needed; kids who occupy themselves with delight and curiosity while observing moths; environmentalists; and other refugees and castaways. Zoe is the person the reader may be drawn to from the beginning; mute and frightened, she is caught like everyone around her in a walled area called the Zone. And then she begins to follow a mysterious swimmer. Will they drown or emerge?

As pointed out, I found a storytelling mode inside the novel, but it might be subtle. Even the title, however, indicates a built thing come to life. I believe that the larger part of the story comes from the author’s genuine concerns about our environment, but the way the novel nests inside itself, like a Matryoshka doll, provides mystery and pacing. While the idea of a man built of clay is referenced in various religions and folklore as how people originated; sometimes a god, such as Prometheus, is the potter. Clay is shifting, malleable material that changes forms under certain conditions—submerged in water or heated in the fire, both disruptions indicative of what’s going on now with ecological change. There’s a lot to read into the title, but a human made of clay is also referenced in the book when Zoe and the swimmer create a crazy and wild effigy. Similarly, words shift and change with the wind, with the hands of artists.

Another idea of creation occurring throughout the story comes the idea of zero. The swimmer, whom Zoe follows, becomes a friend and later says, “Zero represents the present moment—which is illusory. It is nothing but our mind remaking what came before and imagining what might come…,” like clay, or words, as a substance formed into various shapes and end-points thanks to imagination. The reader might choose to interpret zero as one thing or another, but I couldn’t help but feel that one of the ideas behind zero includes the telling of this very story, which circles me back to speculative fiction, something both present and prescient.

Having read a lot of fiction from authors who try to make sense of the Anthropocene, I felt that O Man of Clay was a refreshing and thoughtful read, despite dystopian overtones and the thought of our homes slipping into the ocean someday, if they haven’t already. Within the darkness of a world changing so drastically, much of it because of human folly and misguided ideas about prosperity, there has to also be something lifting us up through what feels like an extinction event, and, as in the case of this novel, that can be the art of storytelling and the urge to preserve and celebrate our natural landscapes while we can.