When we first moved in, our realtor let us know that planting season wasn’t until mid-to-late May. I had a hard time believing it, but now I’m convinced. The weather is just so wild here. Last week we had a snow storm. Last night as I was taking out trash and recyclables, it was spitting snow. Yet the other day we worked in the back yard, on an especially warm but windy afternoon, trimming trees and taking the trimmings to an area in the very back of the property to save for kindling, whittling, or just long-term compost.

Wheelbarrow full of pear tree trimmings to be used later

Despite the crazy weather and nights where it feels like winter more than spring, the weather is slowly changing. Just over the past three or so days, the grass has begun to turn from brown to green, and today I saw our first daffodil. 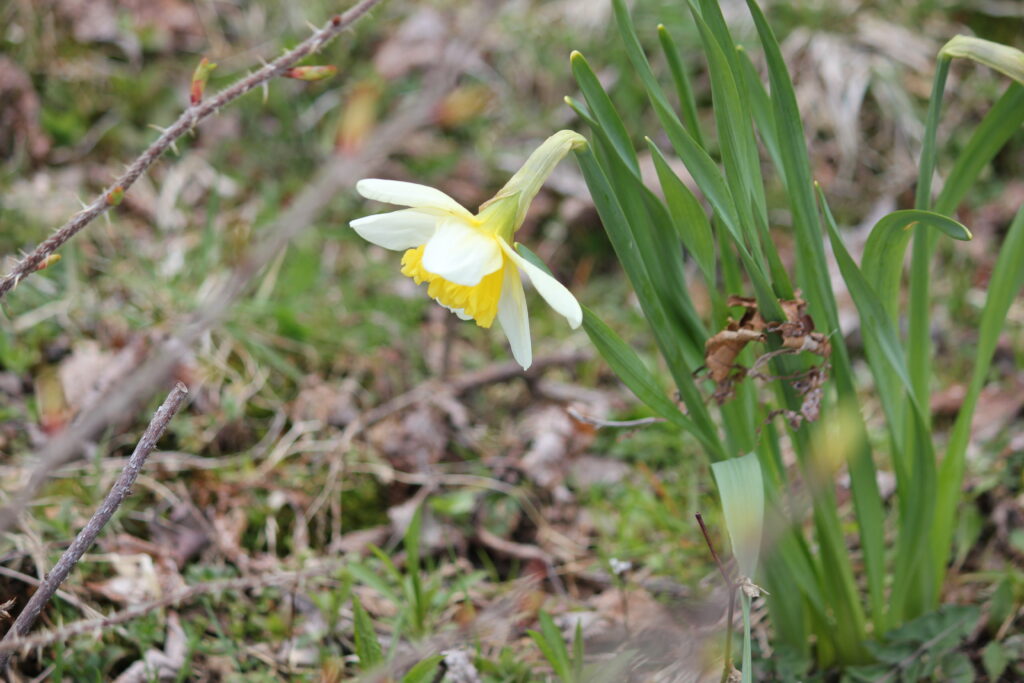 First daffodil in our yard

That wasn’t the first bloom. We’ve had dandelions and forsythia out front.

And though I’ve called this a “wildlife” series, of course we moved into a place that also had some horticulture planted, including the daffodil, roses, and some other plants. But these plants are obviously also attracting native wildlife to the area, which is good. I did want to begin to inventory our flora and fauna, but I haven’t identified everything yet! Most things have not begun to bloom nor can be transplanted yet. We also recently walked the yard with the previous owner, but her first language is not English, so she had trouble translating what everything was. The following list is only what we have seen and identified so far (we have not seen the deer yet, but our neighbors have–and we can see their scat for sure). We’re not always outside, and even though we look out the windows a lot, we are sure to miss something. For instance, a couple of times we’ve seen a red bird that doesn’t seem to be a cardinal fly from tree to tree, but by the time we get the binoculars, it’s gone. 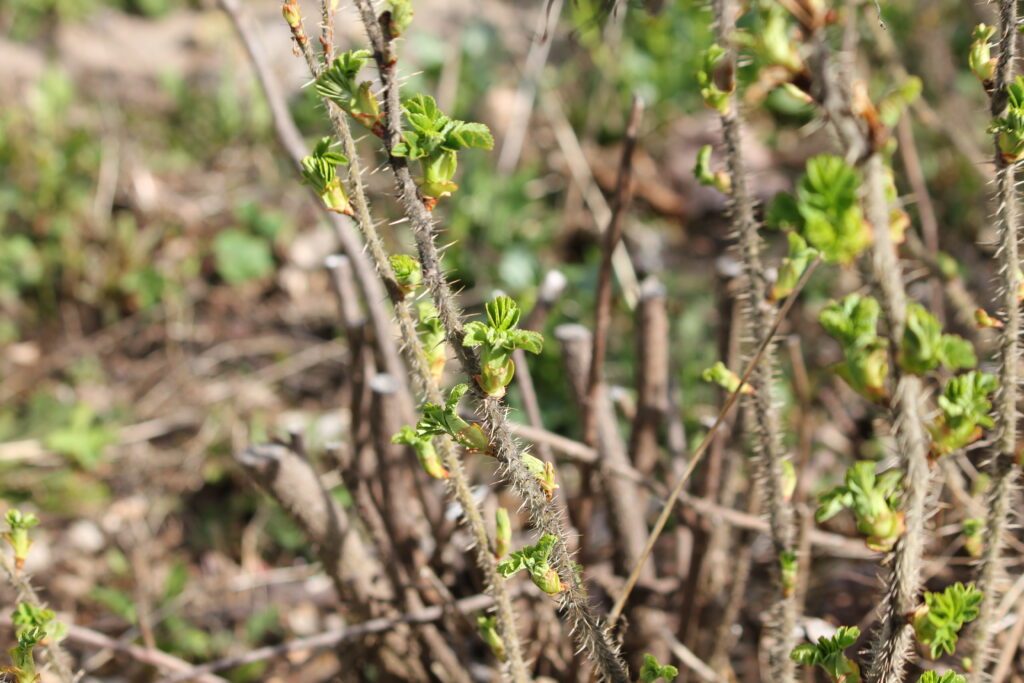 One of the many roses in the yard; this one finally began really budding this week 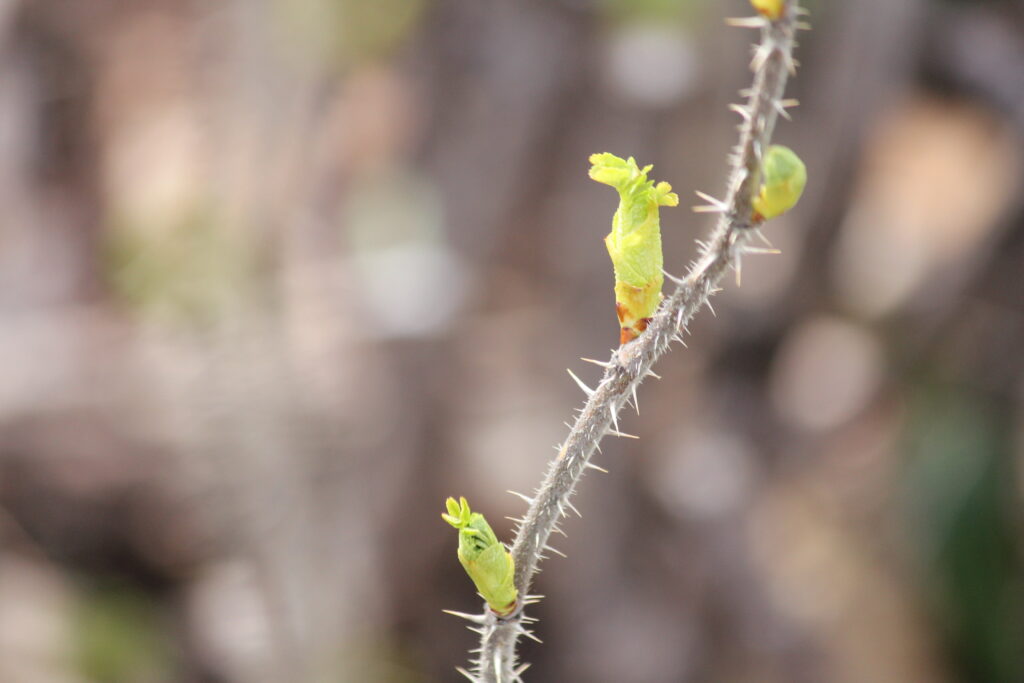 Just during the last week, all sorts of bugs have begun to come out, along with buds and blooms. It’s exciting to see this flora and fauna venture forth into a living, greener world after our gray and brown COVID isolations. We’ve had big ants coming in the house via the front door. They aren’t huge but just bigger than ones I’ve seen before. Apparently it’s also nearly the season for the black flies. I haven’t been around black flies for a long time. They were definitely a thing where I grew up, but Vancouver did not have very many bugs like that.

When I resigned from my old job, my coworkers gave me a generous gift card, and we’ve been holding on to this. I first thought I might get a new desk with it, but my husband had already ordered me a beautiful plain cedar desk that’s perfect for me. We have been wondering what to do with the back 1/3rd acre. It’s a pretty empty place, completely edged by dogwoods. There’s really nothing in this field but wild grasses, a flag marking a golf hole, and a bonfire pit. Even before moving we talked about planting trees in this area, and finally decided to do it with our giftcard. My husband made a spreadsheet of the area, with each cell being one square meter. We’ll use it to plan the trees, since they have to be planted a certain distance away from each other. There’s a tree center nearby that sells what we want, but so far their site has not been updated with their current inventory. They also may not be delivering until fall. We’ve decided to buy the following trees: plum, apricot, white swamp oak, ironwood, sugar maple, butternut, and black walnut. The trees are delivered in a root package. We also learned today that the acreage back there is just fill. There’s a small subdivision nearby, and when it was built, they dumped the dirt on that back area, which is also the reason when you get to the edge of it all, it just drops off pretty abruptly and has a steepish downslope area into a forested area. It’s a good thing the steeper fall-off is protected by all those dogwood bushes. We’re looking into renting a machine that can easily part the sod and help turn it over. We’d really like to just get rid of it and grow bee grass instead. Can you tell we just don’t want to mow? 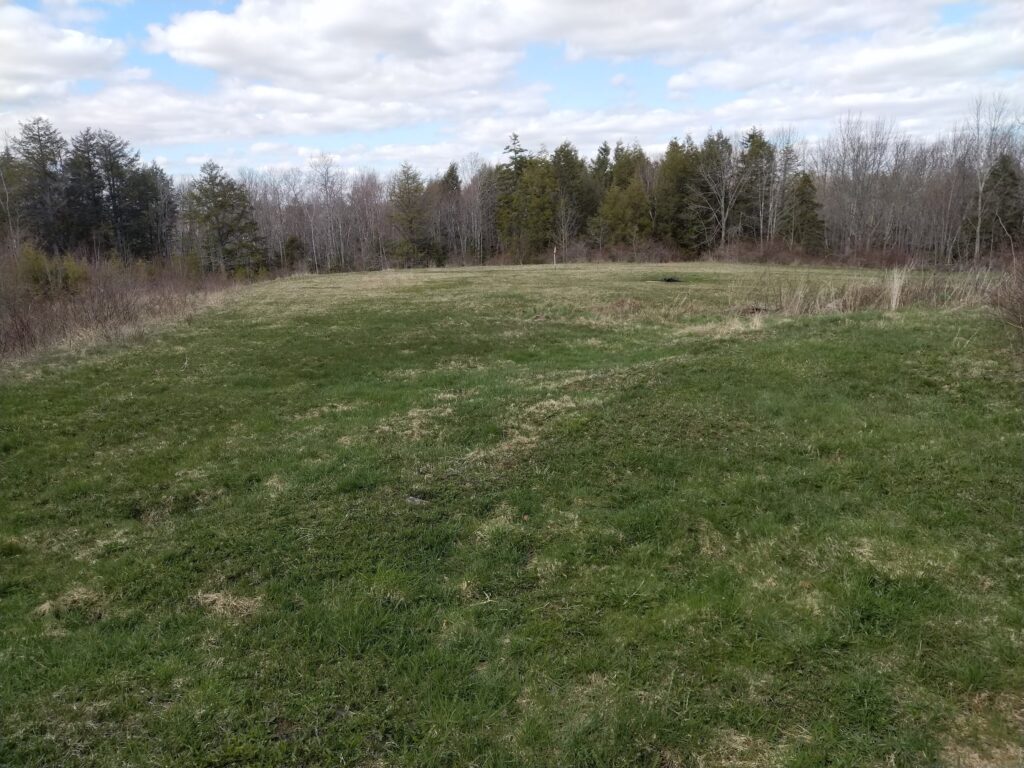 The back 1/3rd acre. To the right (just out of sight) are some of the wild grapes that look like a bramble of weeds now.

I’ve begun indoor seeds and decided the first year to plant in just two of the garden beds. Right now they are full of weeds and other plants. I’ve decided to plant lots of tomatoes and beans as well as leaf lettuce, radishes, zucchinis, green onions, squash, dill, cilantro, parsley, and thyme. There might be a few more veggies than that, but I can’t remember all of them. I may get more seeds later in the spring. I have had great luck in the past with snow peas, so I need to get some of them. The green beans I got are Kentucky halfrunners, so I’m excited to grow them, dry them out, and make shucky beans. We also need to build a fence around the two beds to hopefully keep the deer out. I’ve also got a couple wind chimes on order. One is solar so will light at night. At this point I am expecting varying degrees of failure and wonder if I will just be feeding the deer or whether I will have lots of tomatoes to can for the winter. Speaking of that, I want to plug an author I’ve become close friends with, and whose book Off Grid and Free: My Path to the Wilderness I published at Moon Willow Press. He is very knowledgeable about all this stuff and actually lives in Nova Scotia, though quite a bit up the coast from us. See his latest story at Mother Earth News. He’s got a brand new book out called The Self-Sufficient Back Yard, which hasn’t made it quite to distributors yet, though it’s coming soon and I cannot wait to read and learn from it!

Enjoy more photos of our first peaks of spring: 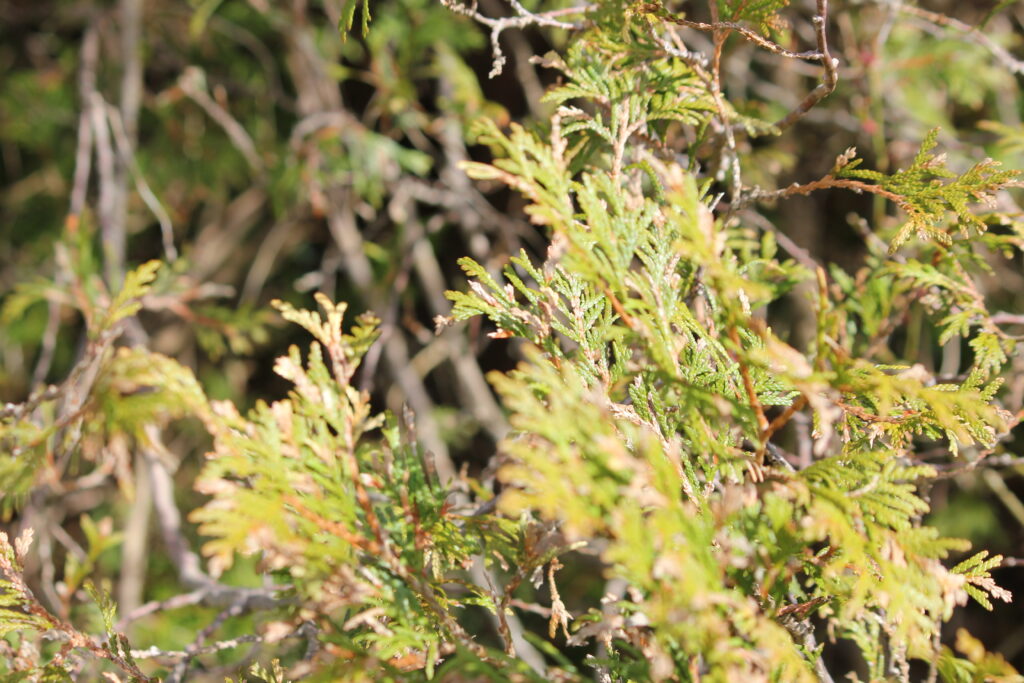 Some kind of cedar bush 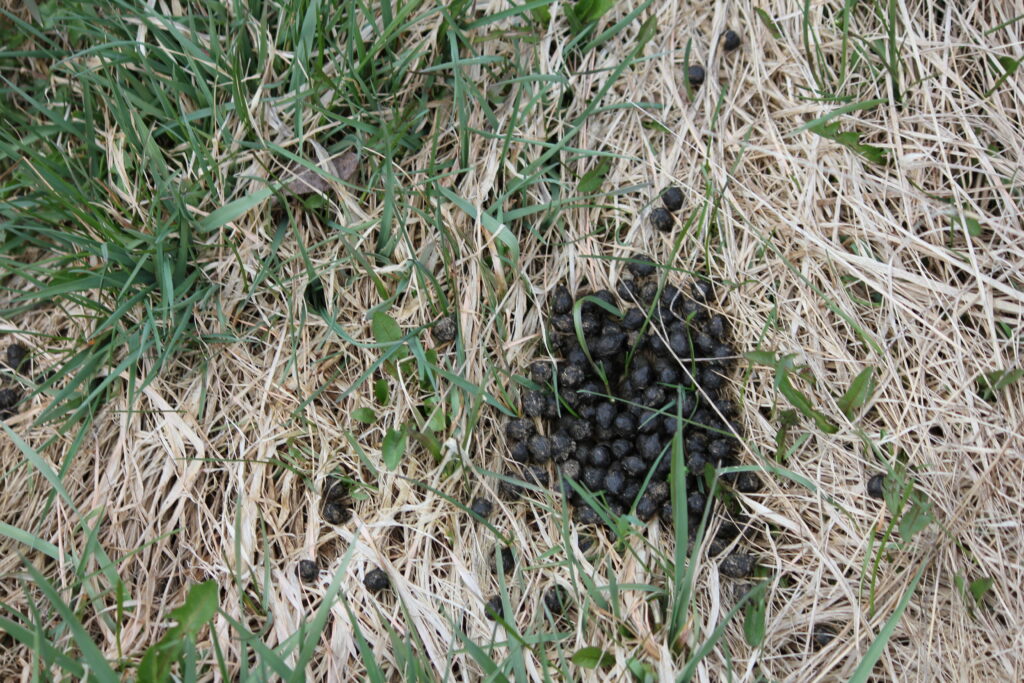 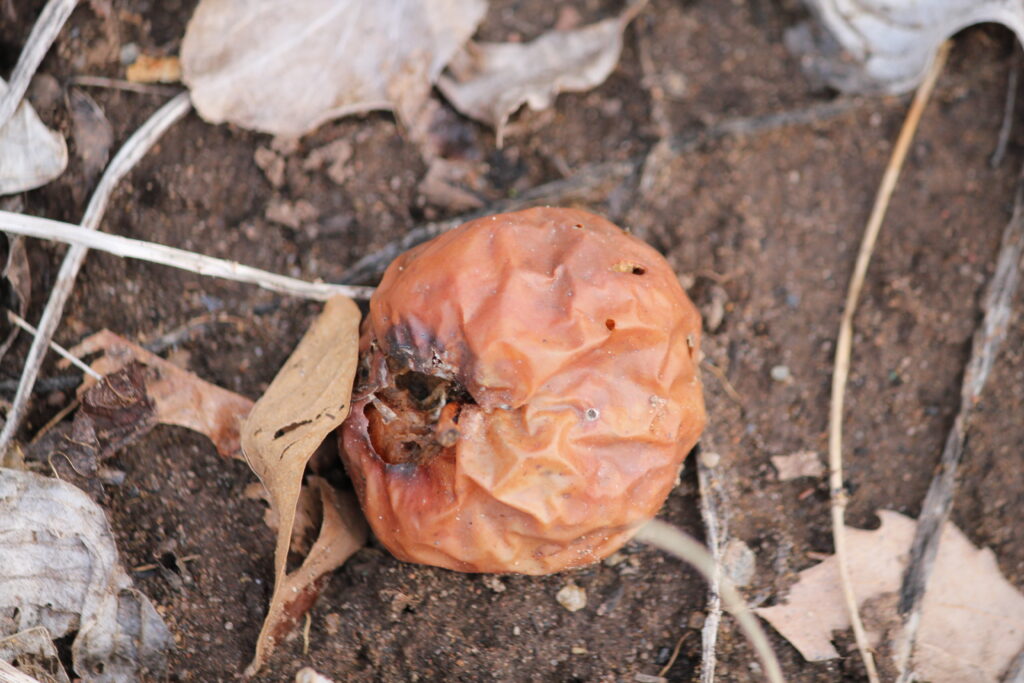 This apple has been rotting near the shed 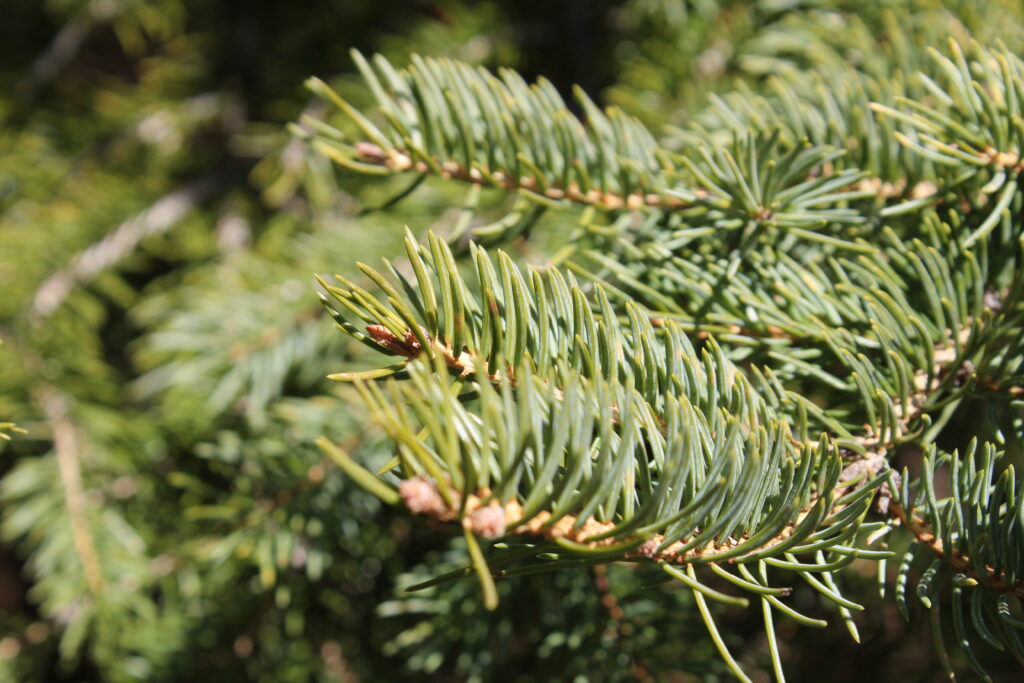 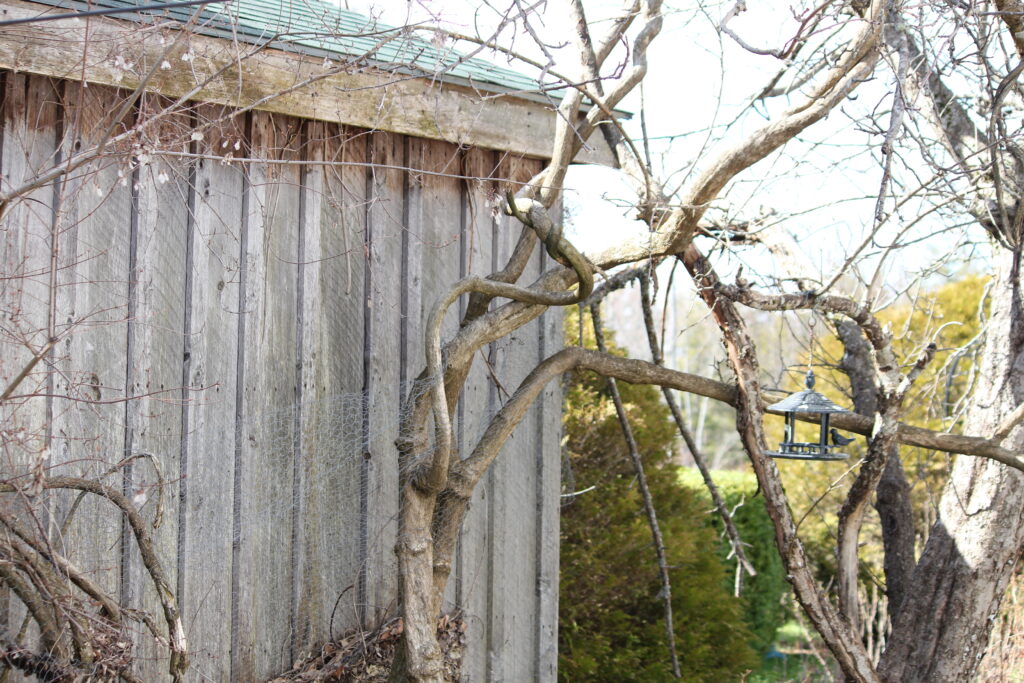 We haven’t yet identified what kind of vine this is. It’s mingling with the apple tree.