I’m going to start this out by reminding folks that where I live, and the nearby lakes, are in Mi’kma’ki, the ancestral and unceded territory of the Mi’kmaq People.

I’ve often referenced the lake you can see through the trees behind our property, though I won’t name it here for location and privacy reasons. I will say that the first and only time I flew into Halifax, I was astounded by the lack of buildings. Rather, all I could see for miles and miles were lakes and trees across a rolling landscape, against a pure blue sky–and it is so often the case here, no matter the season. Also, we do not live in Halifax but a nearby town. I hesitate to call it a suburb, because Halifax doesn’t seem to be a large metropolitan area, rather a city next to Dartmouth, with the large bay between–and then smaller towns as you head outward, to the point it gets rather rural and then disappears into wilder country.

We live in a small town northwest of Halifax. The nearest shopping area is about 10-15 minutes away. That’s not to say that we are totally isolated either, though once you come down our street, ours is the first house on our dead-end lane that has considerable property (2.25 acres), and the rest on down are similar. Even the other houses have actual yards and places to run, unlike anything we ever experienced in the Vancouver area.

Dozens of lakes surround us, the closest being the one behind our property. But just down the road is another and another and another. Some are not too big, enough to sail around quickly. Some stretch further. There’s barely any information online about the town I live in, much less info on the lake behind us. There’s no website that even states its size or anything, so I did a rough polygon ruler measurement in Google Earth and discovered that the area of water is a little larger than 67 acres. It’s not even quite big enough to be listed under Nova Scotia’s inventory of recreational lakes website.

A portion of the lake behind our house. This was taken in mid-October.

The autumn deciduous trees hug the pines and spruces around lakes here. Mid-October was peak viewing in 2020, and shortly after, on the first of November, we went out again on my husband’s birthday to get some colorful photos, but by then most trees were losing their leaves or almost bare.

The lake near us is surrounded by a few properties, mostly some b&bs. The lake is public, but it seems not a ton of people hang out there. There also seems to be a fair bit of emptiness around the shoreline, and at least one fishing pier I’ve seen from the road near us. We’ve never gone completely around the lake. One angler reported fishing on a float tube and described the water as ridiculously clean. As far as aquatic animals at the lake, Campeloma decisum (snails), Helisoma ancepts (snails), Elliptio complanatus (mussel or pea clam), and Rana catesbeiana (amphibia) are reported by the Aquatic Fauna of the Shubenacadie Headwater Lakes Wastershed study [PDF] from Dalhousie. Finding what fish can be caught there is a little harder and comes from what people report on places like Reddit, since I was unable to find stock reports or anything else. People have reported catching small mouth bass, perch, and brook trout.

A nearby resident describes the lake’s four seasons. Springtime is when the lake is relatively ice-free and where he saw his first beaver one year. He reports kayaks and boats on the lake and people readying their summer rentals. Summer, he said, is busy with BBQs, swimming, and evenings spent roasting marshmallows and singing. I can attest to that, as when we had bonfires in our meadow this past summer, we once could catch guitar and singing that wafted over from the lake in the wind. In the fall, he reports, the aster flower is a signature bloom, and the lake turns golden and red with color. In the winter, the lake freezes and often is used by cross-country skiers, sledders, tobogganers, and skaters. Note that the city of Halifax describes the ice in March as thin (2019-2020 season), so of course it’s always recommended to check things out before going on the ice. 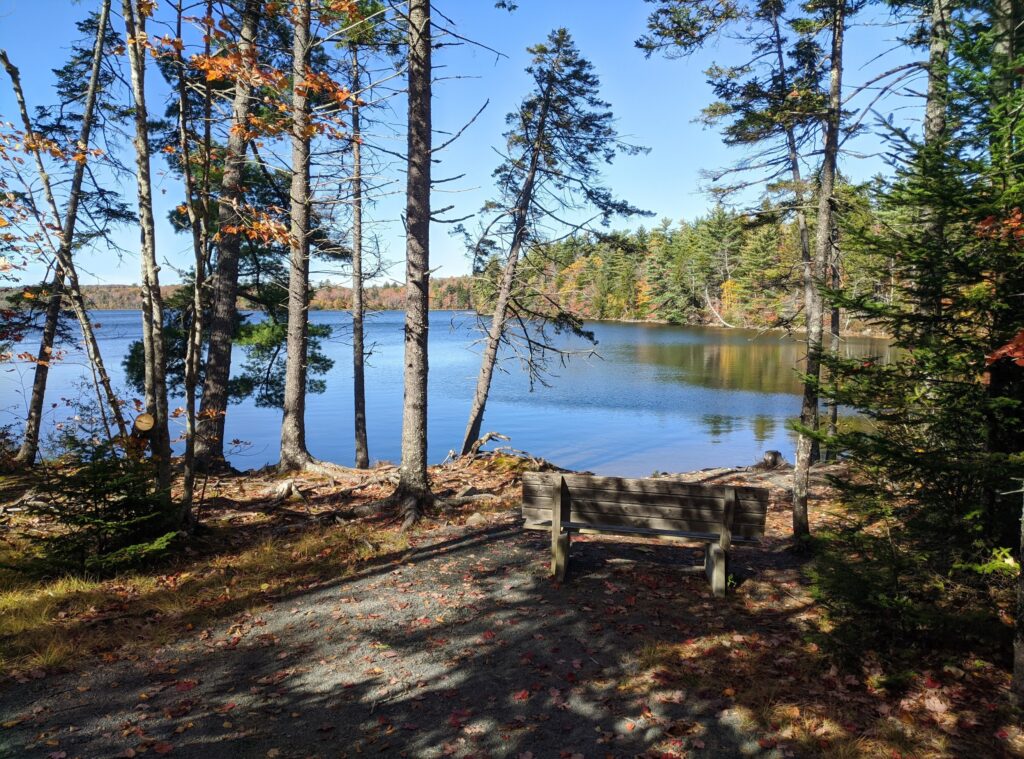 After having a mug at the nearest Irish pub on my birthday, we went hiking around Second Lake (not the lake near our house).

The other day our friend dropped by with an amazing gift of food: cabbage rolls and some other things. I concentrated on the cabbage, now craving lighter foods and more veggies. I had just been to the farmer’s market and bought fresh pears, spaghetti squash, kale, tomatoes, and zucchini as well as some garbanzo beans and the ingredients to make chick pea salad. Anyway, the same friend’s place is also where we had a few bonfires over the summer, and they joined us at our house as well. At his bonfires, he and his wife would marinate pork cutlets–the best ever–and skewer-roast them over the fire, long and slow. He said right now they are building a cabin on their property and a new party place for bonfires. I love those times, and am so looking forward to them again–drinking wine. And their pops (who doesn’t speak a spit of English) ensuring everyone’s whiskey glass was full.

We’re also preparing (mentally and physically) our own gardens for this spring. We’ve already got the no-till cardboard and vegetation down to kill the pesky grass over the winter, from this past year, and are planning on what to grow. Morgan wants to grow some corn, beans, and squash near each other. The idea is that the beans grow up the corn and the squash is planted around them. You can read more about it here. I also want to grow a few tomatoes (not as many as last year), beets, and turnips. If I get my turnips, I will get my turnip greens and be a happy camper. I might also try some collards. We’re also getting a couple bee hives this year! 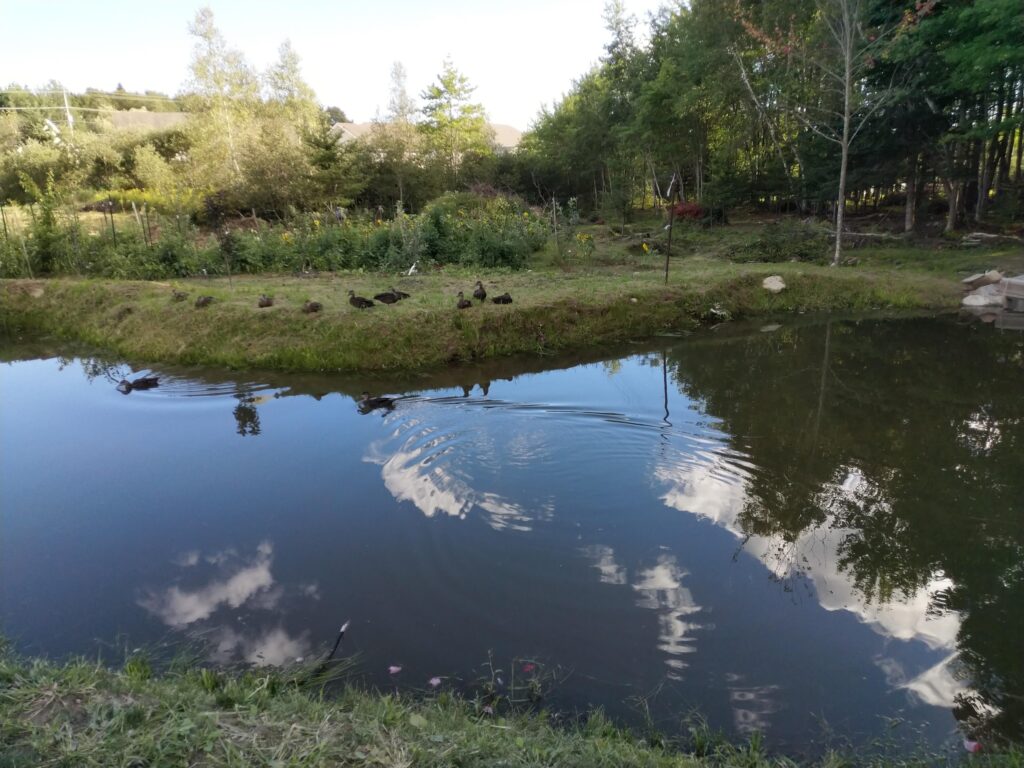 Our friends’ place from down the road. Outside their bonfire area is a small creek, which attracted ducks last summer.

But that’s spring, and now is winter. We’re hoping that later this summer, we will be vaccinated, and by next summer hopefully be able to visit family again and have them here. We’ve already spoken with one of my nieces, whose husband is from Scotland, about a trip back there, hopefully in a couple years. But I’m looking forward to people visiting us too. And there’s a few people in my family who love fishing, so maybe a kayak or two is in store.

Our winter, though, is something to behold. We’ve had some sunny days, a few storms, some lovely snowfalls that make us melt in the beauty of outside. Occasionally we light fires, sing (I just got a new guitar for Christmas), learn some old sea shanties, and thoroughly remain aware that we need to appreciate the simple things around us: Our home, which is still fairly bare but meaningful. Our yard, where we plant, nurture, get dirty and tired, and end out the day with a night full of stars and a mug of something. Our rainy days where sometimes nothing big happens and the cold damp lingers in our bones. Our meals, and the simple pleasure of figuring out new food ideas. The absolute perfection of a home-made split-pea soup with harvested green tomatoes and canned chow chow. And of course, looking out the window and seeing that lake. And dreaming of it.