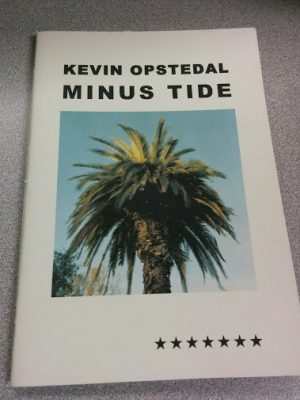 Over a decade ago, when I was chief editor of Jack Magazine, issues would have themes, whether South African poetry or Gregory Corso or Philip Whalen or science fiction and fantasy–all of these usually punctuated with narratives about nature. When I closed the magazine and opened Moon Willow Press, I would later publish books by three authors who had written for the magazine (Anthony Wright, Carolyn Welch, and Thomas Hibbard).

One of the issues of Jack, Volume 3, 2003, featured Kevin Opstedal’s surf poetry as well as surf art by Matt Scott.  The issue was water-related, to be sure.

At the time Kevin sent me a couple of his books, and today’s Discover! looks at one of them, Minus Tide.

It starts out with “Absolute Zero” (excerpted here):

Monterey Aztec embarcaderos, el caminos
flamingo streaks of Toltec lightning
trapped in flickering neon script
to be read like shadows on tinted glass
mistaken continuously for what it is
–a torrent of black roses, elegance
asking for nothing

Writing about surf has Opstedal immersing us into water, noting its color, sound, wildlife, scent, and wild movement. At the same time, we see ocean on the edge of land, and at some point we pick up and go home. In “Limbo Fury,” he writes (formatting lost):

Gulls in the last rays of a dying sun
wheeling out into the deep
pelagic sleep of ocean fog
as we gather up the shadows left in the
parking lot (closed at sunset).

The poet’s attention to how intimate we become with water, waves, and the sport upon which we can travel it–surfing–is reassuring prose to those of us used to concrete. In the outer perimeters is always a forest, a stream, an ocean, and there we are drawn.

Born and raised in Venice, California, and currently residing in Santa Cruz, Kevin Opstedal is a poet whose line leaves three decades of roadcuts across the entire imaginary West. His twenty-five books and chapbooks include two full-length collections, Like Rain (Angry Dog Press, 1999) and California Redemption Value (UNO Press, 2011). Blue Books Press, one of many of his “sub-radar” editorships, belongs in the same breath as the great California poetry houses (Auerhahn, Big Sky, Oyez…) that his own poems seem to conjure like airbrushed flames on a murdered-out junker carrying Ed Dorn, Joanne Kyger, Ted Berrigan, and some wide-eyed poetry neophyte to a latenite card game in Bolinas. “His poems,” writes Lewis MacAdams, “are hard-nosed without being hard-hearted.” As identity and ideas duke it out in the back-alley of academia, Opstedal surfs an oil slick off Malibu into the apocalypse of style.

You can find more about the author at Bill Mohr’s site. He calls Kevin the “Poet Laureate of the PCH”. He notes that:

If Whitman were alive today and had a surfboard, he would probably be catching waves alongside Opstedal, whose poems glide with an inner balance that belies the turbulence hurling his imagination forward, and back, again and again.