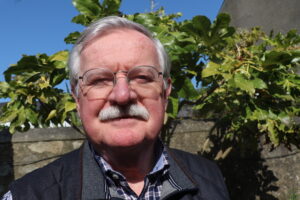 Welcome to the third post in our new Indie Corner series. Today we talk with Dr. Peter Brennan, whose first novel, Iceapelago, was inspired by his keen interest in climate change. He chaired the Climate Change Research Group at the Institute for European and International Affairs for almost a decade. He was an advisor to the Oireachtas (Irish Parliament) Committee on Climate Change and Energy. He lectured on climate change as part of the Masters Programme on Sustainable Finance and is a Director of the Sustainable Energy Authority of Ireland. Peter has authored Behind Closed Doors: the EU Negotiations that Shaped Modern Ireland (2008), Ireland’s Green Opportunity: Driving Investment in a Low-Carbon Economy (2012), and Public Procurement: Rules of the Road (2016). He has also researched many reports on climate change. Peter has travelled to the Arctic, the Antarctic and La Palma as part of his research into Iceapelago.

Mary: Tell us about yourself–your life so far and how you got started in writing. What have you published previously, before Iceapelago?

Peter: I live by the sea at Sandycove in South Dublin with my wife Margaret. Although I am 67, and have had a career for over fifty years, I still run a business consultancy. I abide by the maxim for indie authors Don’t give up your day job, yet. Having worked in Ireland and Brussels, including seven years with our Foreign Service, I have professionally written countless memos, articles, and reports over the past decades. After my doctorate in 2007, I published my first reference book, Behind Closed Doors: the EU Negotiations that Shaped Modern Ireland. It sold well in academic circles. When I was invited to lecture in a Masters Programme on climate change, I decided to write the course textbook Ireland’s Green Opportunity: Driving Investment in a Low-Carbon Economy. And four years ago, I wrote Public Procurement – Rules of the Road as a textbook for my clients. Writing nonfiction, especially academic books, is a completely different skillset compared to writing fiction, and making the transition was not easy. That said, writing defines me. I truly relax when I write.

Mary: Tell us something about your Iceapelago. Who is the intended audience, and what’s going on in the story? 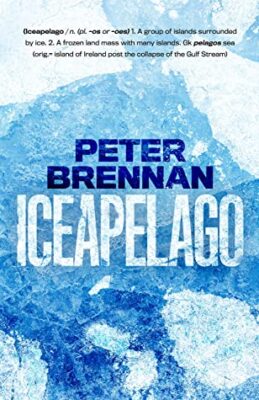 Peter: Iceapelago, which describes a network of iced islands near Ireland, opens with a pair of Arctic foxes walking over sea ice to an island to make a lair in an elevated area with prospect of food. The prologue paints the picture of a devastated landscape. How the Arctic foxes arrived in Iceapelago is a consequence of three story lines that have one outcome: a series of natural disasters that transform life and living. The first storyline is based in La Palma in the Canary Islands where Spanish students witness the re-awakening of a dormant volcano. In Greenland, atop the Ice Shelf, scientists try to measure the flow of melt water through the glaciers.  Marine researchers use a submersible to investigate reports of seafloor seismic activity off Ireland’s Continental Shelf. The story builds slowly as the characters are introduced, but quickly gathers pace as dramatic and page-turning events unfold. La Palma explodes, the glaciers fracture, and offshore earthquakes drive tsunamis to the coast. Those who have read Iceapelgao say the narrative is scarily plausible.  Anyone who has an interest in climate change should enjoy the novel. It opens up scenarios that make it a compelling read.

Mary: What other ecological themes does your novel have, and how were you inspired to write about them?

Peter: I’ve been involved in climate action policy for almost two decades. For example, I chaired the Climate Research Group of the Institute of European and International Affairs for ten years. I also advised the Irish Parliament on climate change. I get the science. I don’t need to be convinced. In fact, I believe the tipping point has already been reached and my grandchildren will be living in a quite a different world, but hopefully not in the conditions described in Iceapelago. During a cruise to Antarctica some years ago I was challenged to use my knowledge and insights about climate issues to write a novel. I traveled to Greenland and witnessed the melting of the glaciers, visited the La Palma on the Canary Islands and walked among the dormant volcanoes, and got access to a marine research vessel that did seismic surveys deep off Ireland’s continental shelf. The natural events that researchers and scientists witness are brought to life in Iceapelago with a dystopian finale.

Peter: With one exception, I have received great reviews from the likes of Publishers Weekly, Kirkus, All Authors, Readers Favorite and many independent reviewers. However, positive reviews, newspaper coverage, and the wide use of social media (including www.iceapelago.com) have not translated into huge sales for this indie author. With bookshops on restricted opening hours, book festivals cancelled, book awards postponed, and all promotional activity impossible on grounds of social distancing, it is a bit discouraging, to be honest. But I did not write Iceapelago to make money. I wrote for the sheer enjoyment of the experience.  I will be a bit wiser with the sequel and will try harder to find a publisher as without such a connection it is nigh impossible to get a profile in what is a highly competitive market. I am also conscious that fiction about climate change is a niche genre. Because I am an optimist by nature I have written my acceptance speech for the Oscars. I am told Iceapelago the movie will cost $110m to produce! Great value to a smart investor.

Peter: I hope to have the sequel, Iceapelago: the Aftermath, completed by the end of the year. The writing style is quite different; there is far more dialogue and far less by way of context detail. The story is about human survival on Iceapelago, which goes into total lockdown once winter arrives. It is set in the near future after the collapse of all basic infrastructure and public services, including currency, healthcare, and government systems.  The flood waters around Iceapelago allow river cruisers to provide essential supplies. But Iceapelago, in common with other areas in the North Atlantic region, resembles the Middle Ages rather than a developed economy in the late 21st century. The Arctic foxes who thrive in tundra conditions are hunted by the humans as living conditions worsen. The community leaders try desperately to avoid chaos, loss of life, and destruction as another winter season approaches. The arrival of marauding polar bears is not a good omen. The crescendo destroys the status quo and at the same time starts a new beginning. I also have an outline, just two pages, of the final book in the trilogy. I will use the team from Design for Writers when I decided to self-publish.

Mary: Thanks so much, Peter! It all sounds interesting, and I already have a love for Ireland that I’d like to revisit in your new series.