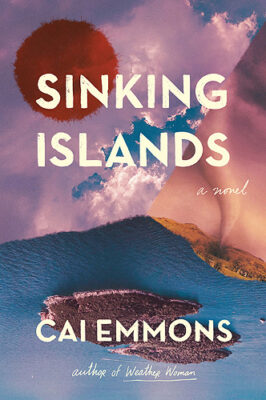 Thanks so much to Cai Emmons, author of Sinking Islands (a sequel to Weather Woman), for answering some questions about her new book. Sinking Islands is out September 14, 2021, from Red Hen Press. Cai is also the author of the novels His Mother’s Son and The Stylist. A graduate of Yale University, with MFAs from New York University and the University of Oregon, Emmons is formerly a playwright and screenwriter. Her short work has appeared in such publications as TriQuarterly, Narrative and Arts and Culture, among others. She teaches in the University of Oregon’s Creative Writing Program.

Mary: Tell us about yourself—how you got started in writing? What else have you published?

Cai: I have been writing since I was about eight years old when I became entranced with words and began to write poetry. The next year, in fourth grade, I had a teacher who had us write “daily compositions” about anything we wanted. Sometimes he put a prompt on the board, but it was always our choice as to what to write about. He never graded what we wrote either. The situation was so freeing, so empowering, that I became hooked on writing. In high school I wrote poetry, and then in college I began to write some plays that had small productions in New York. I liked writing plays, but I didn’t see how I could make a living at it, especially with the kind of surreal plays that I was writing, so after college I decided to go to film school. Film seemed like an arena where you could utilize your creativity while still earning a living. I lived in New York and made films and wrote screenplays and teleplays for a number of years until I felt that my sensibility was really more squarely in fiction. At that point, I decided to earn an MFA in fiction and I have been writing novels ever since. I have published four novels, including Sinking Islands, and one collection of short stories called Vanishing.

Cai: Sinking Islands is a sequel to my novel Weather Woman, the story of a meteorologist who discovers she has the power to change the weather. In that novel she is just learning to understand and use her power, and she ends up doing various “interventions,” such as stopping tornadoes in Kansas, stopping fires in California, and trying to re-freeze the permafrost in Siberia. At the end of that novel, she comes to question whether she should be acting alone, so in Sinking Islands she decides to teach her skill to like-minded people from around the globe who are facing various climate problems. In addition to Bronwyn and Diane, the two main characters in Weather Woman, Sinking Islands includes a character from Sao Paulo, Brazil, a father and daughter from a sinking South Pacific island, a woman from the plains of Kansas who has lost both her husband and minister to tornadoes, and some characters from Greenland. The story’s audience is people who are interested in climate fiction certainly, but also those who appreciate a psychological approach to story-telling, as there is a strong focus on the characters, their problems and interactions. The book is a realistic novel with a single supernatural element.

Cai: I have been concerned about the environment and the warming climate for a long time. When I began to write Weather Woman I was planning to write about weather not climate, but of course when you write about weather, questions about the climate inevitably arise. After I finished that book I became concerned that I might have conveyed the idea that a single heroic person could save the Earth with her actions. In Sinking Islands I wanted to make it clear that our problems can only be addressed through collaboration, not through the work of a single individual. Because the Earth’s warming creates different kinds of problems in different places around the globe—melting ice sheets, rising sea levels, droughts, more powerful storms, etc.—I incorporated characters from several countries to touch on that variety. I think fiction can play a useful role in bringing questions to the table that prompt conversation. And conversation is always a starting point for change.

Mary: Are you planning on any book fairs or talks? How are you marketing during Covid?

Cai: I think the book world is gradually opening up again, and I hope that will mean that I can attend some in-person events in the fall when Sinking Islands comes out.

My marketing approach is undergoing a fairly radical change right now. In the last year I began to lose my voice, culminating recently in a diagnosis of ALS. I am able to move around fine, but my voice is quite seriously compromised, to the point where it isn’t feasible for me to do readings. I have lined up some writer friends to help me, and I’m experimenting with a new assistive device that speaks with my sister’s voice which I hope will enable me to do some interviews. So my marketing strategy is currently a work-in-progress!

Mary: I am so sorry to hear that, Cai! Are you working on anything else right now, and do you want to add other thoughts about your book?

Cai: The pandemic has been a productive time for me. I finished two books which are now with my agent. Hair on Fire is the story of a woman who finds herself serving on a jury with her ex-husband from whom she is estranged. And Unleashed is the story of a woman whose last child has gone to college and whose husband has been toying with an affair. When fires arrive in her Sonoma neighborhood, she’s at the end of her rope and undergoes a major transformation. I hope these two books will find happy homes soon!