I always think of Jeff VanderMeer’s prolific Twitter feed, where he talks about writing as well as about his backyard wildlife. He has a lovely camera and tweets a ton about all the stuff happening in his back yard, but I am not so active on Twitter. I’m just as inspired though. I interviewed him a few years ago; looking back, the chat seems nascent on my part, but he clearly is inspired by local place when writing. It’s a theme I try to inject into this series, but sometimes forget as I’m so wrapped up in what I’m looking at out there. 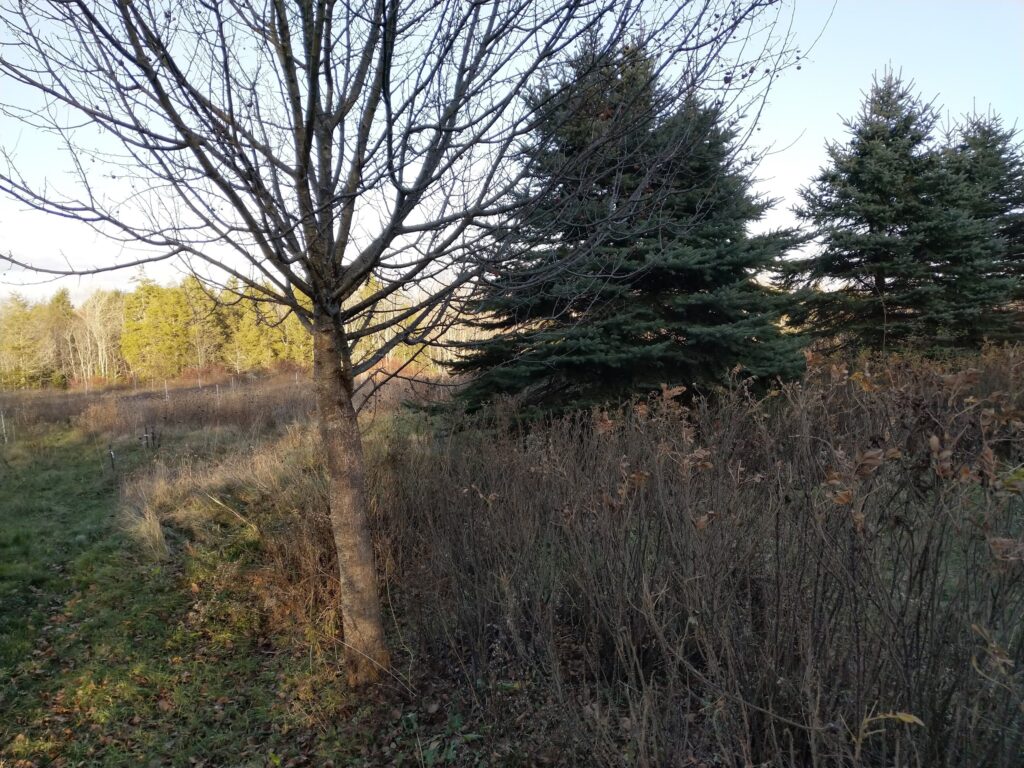 Spruce in the back yard

First new thing, I started running again last week but am going slow right now, because my left foot is still weird. Rather than running every other day, I’m sticking to once or twice a week. First time I ran, I did a track through our back yard (about a mile), and it was so much fun. I saw a lot of deer poop and tried to avoid it. When I run, I have my head in the clouds, dreaming of things, while simultaneously looking at my surroundings. The yard is brown, and the tall weeds that we had to mow around in the summer are now only about a foot high. Birds flit everywhere: finches and blue jays mostly. The crows come out still but aren’t as prevalent as they were in the summer and fall, and Charlie the seagull came by on American Thanksgiving but only got suet, no turkey for him. He had gray spots, and I hadn’t seen him for a while. The deer are larger, and the fawns have lost their spots. The Queen Anne’s lace is brown and low. Because of a warm season so far (though we’ve had plenty of very cold nights), we still see bugs here and there, and I’m distinctly missing the nightly summer sound of crickets and frogs. With the trees around the back of our lot losing their leaves, except for the evergreens, we can see the lake again outside our back window. Winds are wild, and one of my solar wind chimes blew every which way, wrapping around a branch of a cherry tree. I went about the yard the other day, snipping some spruce (really sticky now) and some pine, and gathering pine cones, for a Christmas decoration I put in our bay window–along with the few pine cones I found and some orange slices I dehydrated. I have since had to remove it from the window since one of our cats tried to eat the pine. We did a few lights out front, but that’s about all the decoration we’re doing this year. 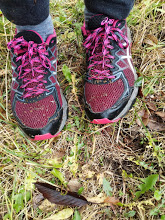 Dug out my old trailrunning shoes

When it gets cold and windy and crazy out, we sometimes light a fire at night and drink wine and play old games or talk or sing sea shanties. I’m not kidding you. This is our life. My husband can sing many of them by memory, including “Northwest Passage.”

We haven’t had any real snow since late November, though occasionally we wake up to see a thin layer of white on the back deck. Tonight it might snow a couple inches. It’s time to bring in more firewood.

While out in the yard, I think of lore, especially tales that include love, ruins, and preservation. Mix this in with whatever human part of us ascends to the wild, and that’s what running does to me. And that inspires my writing too. I was obsessed with Jenny of Oldstones and Children of the Forest lore from Game of Thrones, and that essence is reflected in my yard, with the old-stone statues of women carrying things while presiding over the yard and cold-water bird baths. Some of that lore stuff found its way into my newest novella: Bird Song–not a lot, but at least the references to fae and the ideas of ancient beings and their spirits still watching over us. And it’s even stronger in my upcoming (2022) novel, the second part of the Wild Mountain series, with The Stolen Child. I haven’t written a lot about it yet, but it heads back to Ireland, where when I did visit, I was amazed running among the many trails there–many places that Yeats had written about. 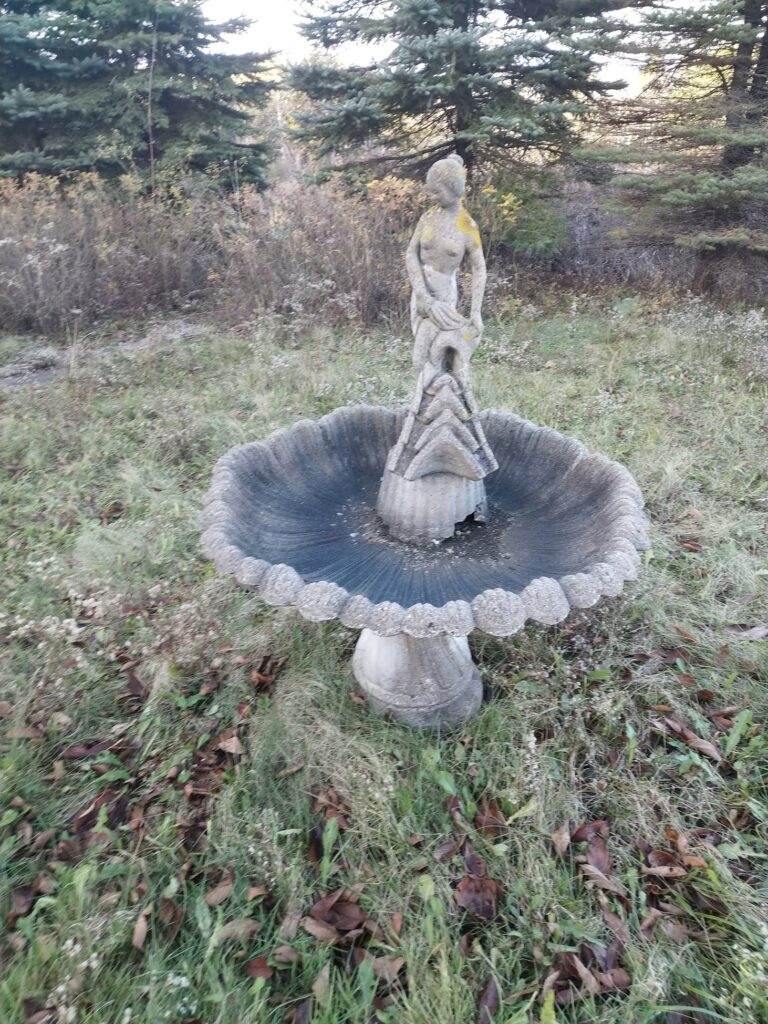 Reminds me of Jenny of Oldstones for some reason

Anyway, running around the yard takes me to that typical dreamscape I have–the pure feel of running, which is kind of a throw-back to when we were animals, maybe. See my interview with poet Lorna Crozier about her book The Wild in You. I’ll never forget her words:

If we’re lucky enough to get into the wilderness, our bodies and our spirits crackle with life. Our legs on a trail feel stronger. They become animal again. Our sense of smell is honed. Raven speaks to us in one of the 200 dialects ornithologists have been able to measure. When a grizzly inhales my scent, I live for a moment inside his body, inside his mind. How can I not be changed?

That interview was several years ago. I came across this idea again recently while talking with Christiane Vadnais about her novel Fauna, which is just so wonderful and freshly relevant, weird, and haunting. She told me about how she came to write her book (I’ll link the interview when it comes out), and she said:

The idea came from an article I read about dreams. I am fascinated by their symbolic logic and the way they make us see things differently. The article said that neuroscientists, when they study it, find a lot of people still dreaming about wild animals, about being chased, etc. It seemed strange to me: how can we dream about this, considering that most of us have never seen a bear outside a zoo? Could that be a reminiscence of our animality, a primitive signal sent by our brain to tell us that we are cut from our own materiality? The poetry I saw in this thought inspired me. I wrote what became the first page of Fauna.

So, writers, especially those into ecofiction/nature writing, whatever you want to call it, are hyper-aware of their outdoor surroundings and how it all inspires us–and how we become animal. Not to say that I’m exactly running too much just yet, or maybe won’t be until spring–but that when I do, the wild comes to me and lingers until it hits the page in some explosion of memory.