Recently in the New York Times, a woman bragged about our province being Covid-19-free. It’s a little early to be bragging about that, I thought. The Halifax subreddit seemed to think the article was a little smug. While the rest of the world has suffered terribly, as though it were not one or two waves or more of this disease, but a continual wave, Nova Scotia has been mostly Covid-19 free for weeks. But this stopped during the past two weeks when little inklings of a community spread began to show up again, as it had in the spring, when I moved here. I wrote about that time here, having traveled to five cities right when the pandemic was announced and panic began. The new community spread isn’t as alarming as most of Canada’s or the US’s, but it does go to show that we’re not some smug little almost-island on the Atlantic, separated by a single, wide isthmus to New Brunswick, immune to the rest of the world. Also, a bubble is only as strong as its every resident and traveler, and when one gets the disease, there is a chance it will spread. I think honestly that the province has gotten a little too relaxed. I had to go to Walmart the other day (I never shop there, but it was the closest place that offered passport/PR photos, which I have to renew), and I was astonished at the lack of guidelines being followed in the store. I saw several people without masks, and nobody paid attention to standing 2 metres apart. Aisles were crowded, in some cases, people bumping into others. The store did nothing to enforce these regulations. I saw one woman without a mask leaving the store and going right up to the receipt checker, laughing in his face, touching his arm–they probably knew each other, but the alarm bells went off in my head. The photographer there did follow regulations, however, for which I was grateful. If I saw that chaos within just one hour spent at the Bedford Walmart store, imagine how many others like it are being remiss and relaxing conditions. Note that I have not seen this at other stores in the Sackville area, though a lot of people do not pay attention to the arrows on the floor, everywhere. But places like NSLC, Sobeys, Atlantic Superstore, and smaller shops, are very good at enforcing the regulations we have. Anyway, I think the initial new cases were from travelers into the area not properly isolating. Now we’ve seen the start of a community spread in schools, restaurants, pubs, fitness centres, and hair salons–the very kinds of places that were shut down for so long.

Now, new regulations are being set, including the following:

We’ve canceled our American Thanksgiving meal, which would have been attended by up to ten people. One guest recently developed a cough, too, but we’ll probably drop off some food that day for them. We’ve also discussed ordering groceries online again and doing contact-less pickups. That’s what I did during my first two months here. 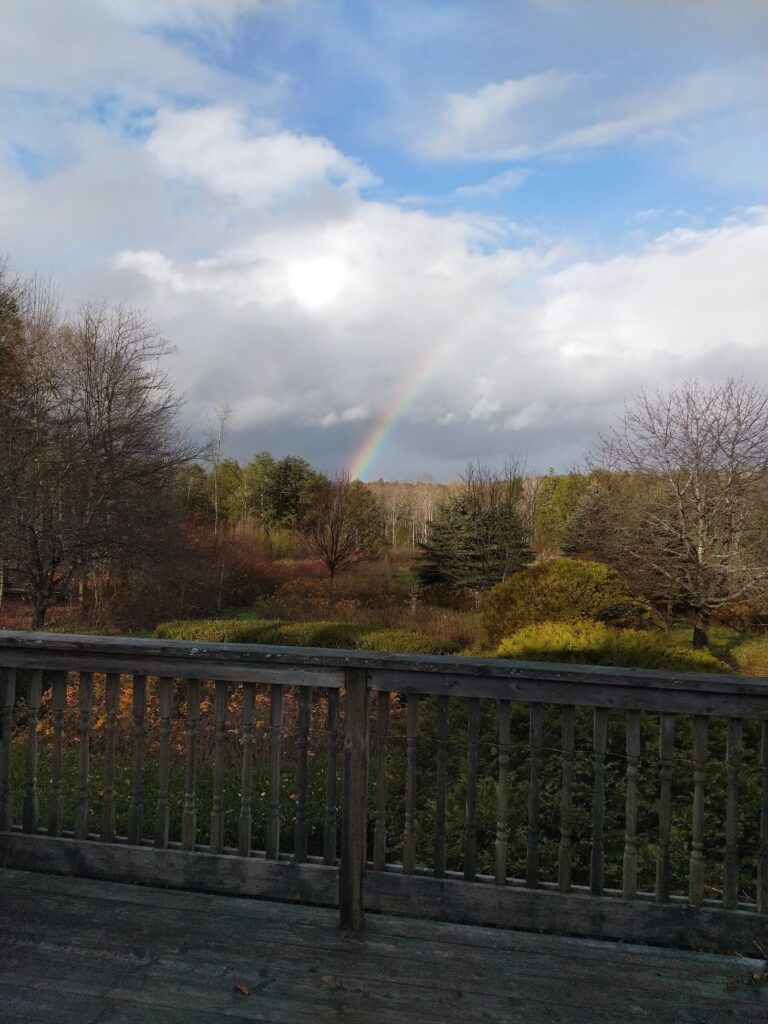 The backyard offers solace in days of depressing human folly.

What does this have to do with my backyard wildlife? Well, I can’t help but always observe–through the window or out in it–our backyard and notice how it doesn’t change, except for seasonally, regardless of the stress the human world goes through around it. I’m seeing a tremendous amount of birds, even a butterfly the other day! And we’ve still had deer coming into the yard, foraging and even nesting/sleeping in the yard. There’s also the case that can be made of what I’ve heard termed “anthropause,” which is the lessening of human impact on the natural world as people stay indoors more. Our plans for the backyard is to keep it open to wildlife, not humans, except for the occasional summer or autumn bonfire. Also, Covid-19 seems to have originated from wildlife trade.  Maybe it’s just nature’s way of telling humans to be a little smarter. Now if we only could. I have my doubts about the United States, as so many Trump-lovers don’t have critical thinking skills anymore and have succumbed to his lies and to conspiracy theories, including Qanon. While I’m dreaming of another age of Enlightenment, it does seem that this kind of post-truth world parallels the continued destruction of our planet, which kinda sucks, being that it should be obvious that devastation of ecosystems, or our home, is also unhealthy and, in the end, not sustainable for life here. 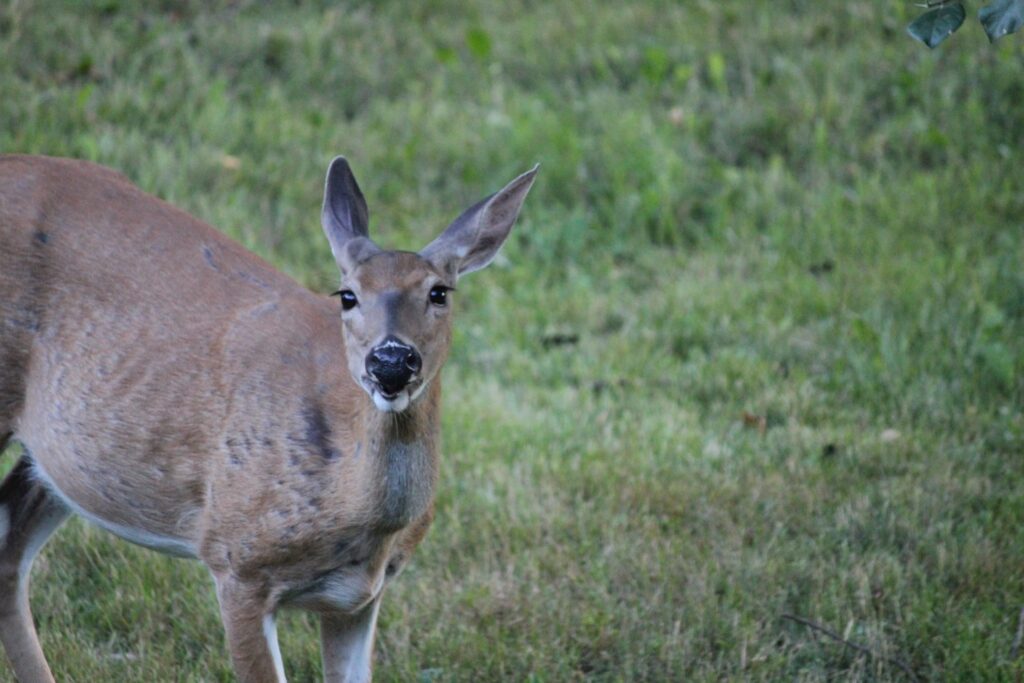 One of our backyard friends.

For us, this tiny pocket of the world at our new home might be surrounded by human drama, but the wildlife in our yard is a sanctuary away from that human folly.

Today we spent time clearing out the three garden beds, covering them with cardboard and leaves to provide a good winter mulch to hopefully kill all the weeds underneath. Those three beds are the only thing we’ve revised about the yard, but to be fair, they were there when we moved in and the vegetables and flowers we grow there attract birds, bees, and offer a place for a thriving insect world underneath. 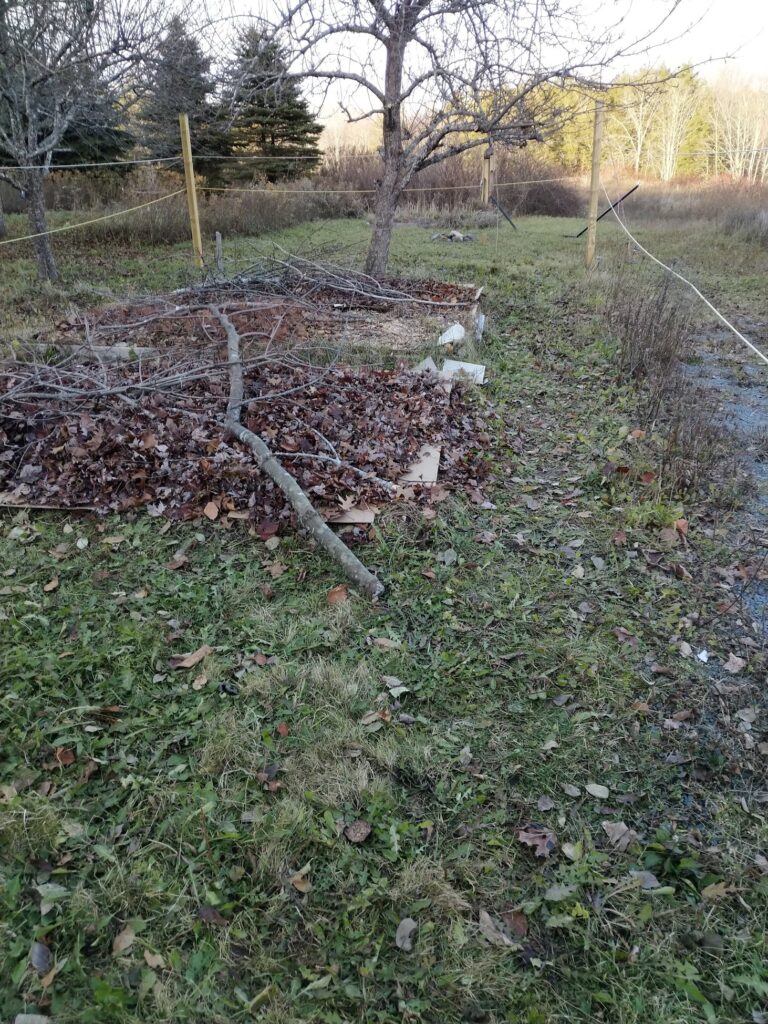 Three garden beds dormant for the winter, covered in cardboard and mulch.

As time goes on, when I am upset by the world and the people in it, I sequester to my personal home and the wildlife surrounding it. I feel extremely fortunate to have the privilege of living here, but in truth, it’s way more affordable than our old place in the Vancouver area. I’ve had some challenging times. I have not heard back from a multitude of jobs I’ve applied to. The only thing I was able to get recently was a volunteer copy-editing position at a local wildlife center. My new novella hasn’t gotten much attention yet as far as reviews, though several copies have sold. It’s something I loved writing and worked so hard on. I have continued to be harassed by an individual who seems to love stalking and bullying me and lying about me and my work, like in some weird pathological way as if he enjoys it. (More on that here; I’m definitely not the only one being harassed.) I’ve always had the fortitude to keep going, no matter the challenge, but watching the world around me and all its toxic individuals is disheartening. I have been using social media less and doing more personal creative work. 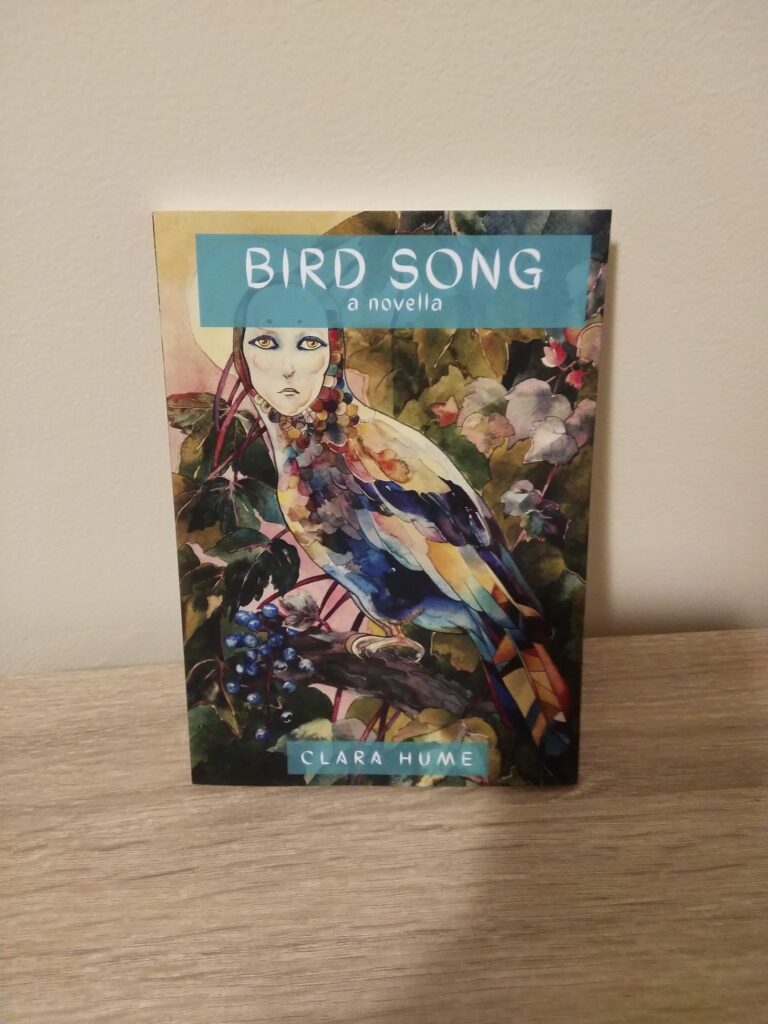 Speaking of creativity, I received some copies of my newest book. I love it!

Also I have decided to start running again. I have been lifting small weights to start strengthening and just ordered new headphones, which seals the deal. I don’t think I can ever run as much or as fast as I used to, due to my left ankle never properly healing from past trauma, but the thought of running again gives me peace. There is absolutely nothing better than running through the trees, feeling at one with a world where I don’t have to deal with humans and therefore, like Yeats implied, “come away.” It’s a weird time to start running as it’s almost winter and we’ll have a lot of snow. But we also have Yaktrax now, so that’ll help. I’ll probably just run a track around our acreage unless the ground is so full of snow, then I’ll run on the nearby roads. If it’s too snowy and icy I might do a track around the house, up and down. I’m just laughing as I think about it. At least that would involve some stair climbing, which is good cardio.

Speaking of snow, we have had our first snow! It was a few weeks ago, but even afterward, we had near summer-like weather. I love it so much here for the sunniness, so unlike Vancouver with all its rain (though I really do miss my old coworkers and the beautiful rainforests of British Columbia). Now we’ve had cold, dry, sunny weather and occasionally at night have lit the wood stove. I’ve learned to create a pretty good fire now, which burns all night.

Sunset just below clouds after our first snow this season. 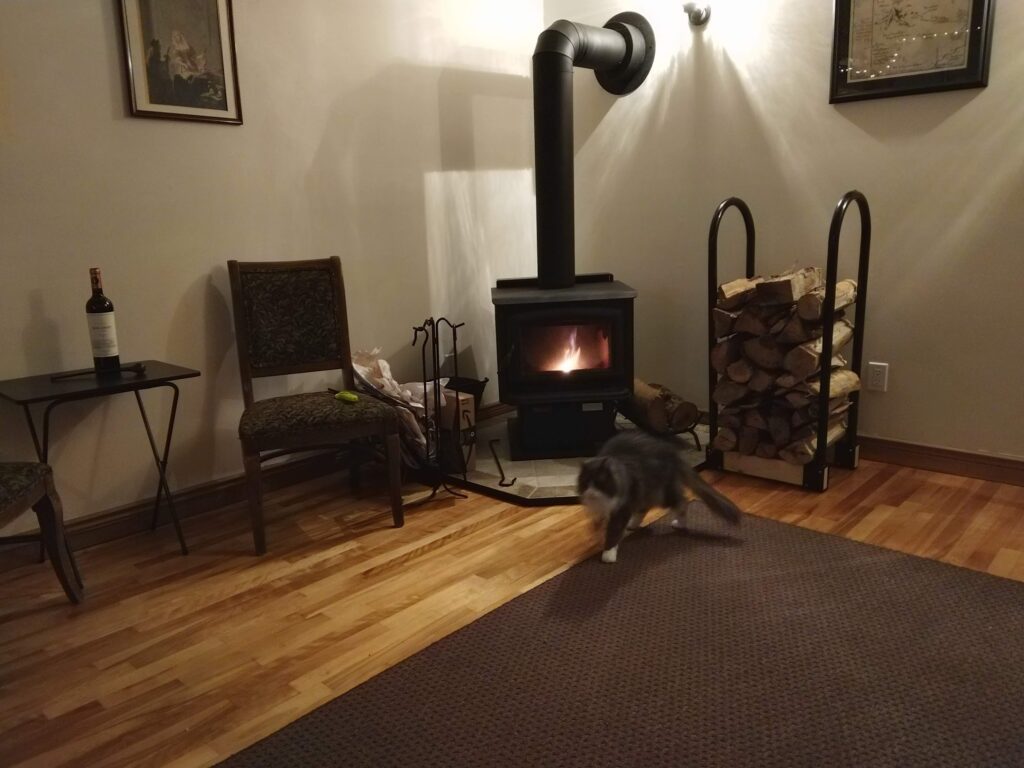 A blurry cat runs around as I prepare a fire for the typical Friday night chat with loved ones on the phone.