Deep summer embraces us. The foliage around the house and meadow are wild, with tendrils creeping along the grasses or climbing the old shed. Wild grapes wave from behind the spruce trees. My hawthorn fairy tree, with its solar owl light, wind chime, and fairy sits silently, secretly, beyond the rose gardens. Fuzzy peaches are half-grown. A bevy of viburnum covers part of the shed roof, right next to our balcony. If I’m out there reading, a constant buzzing reminds me of the happiness of pollination and renewal. Honeybees fill the flower petals. My skin is browning just from being outdoors. This time of year seduces me, makes me something else.

Deer are more numerous than usual this year. Perhaps it is because of a couple bucks the local mama had rather than does. One is a piebald, and he’s almost always around. Sorry about the blurry photo. He’s on the move if he senses us out there. 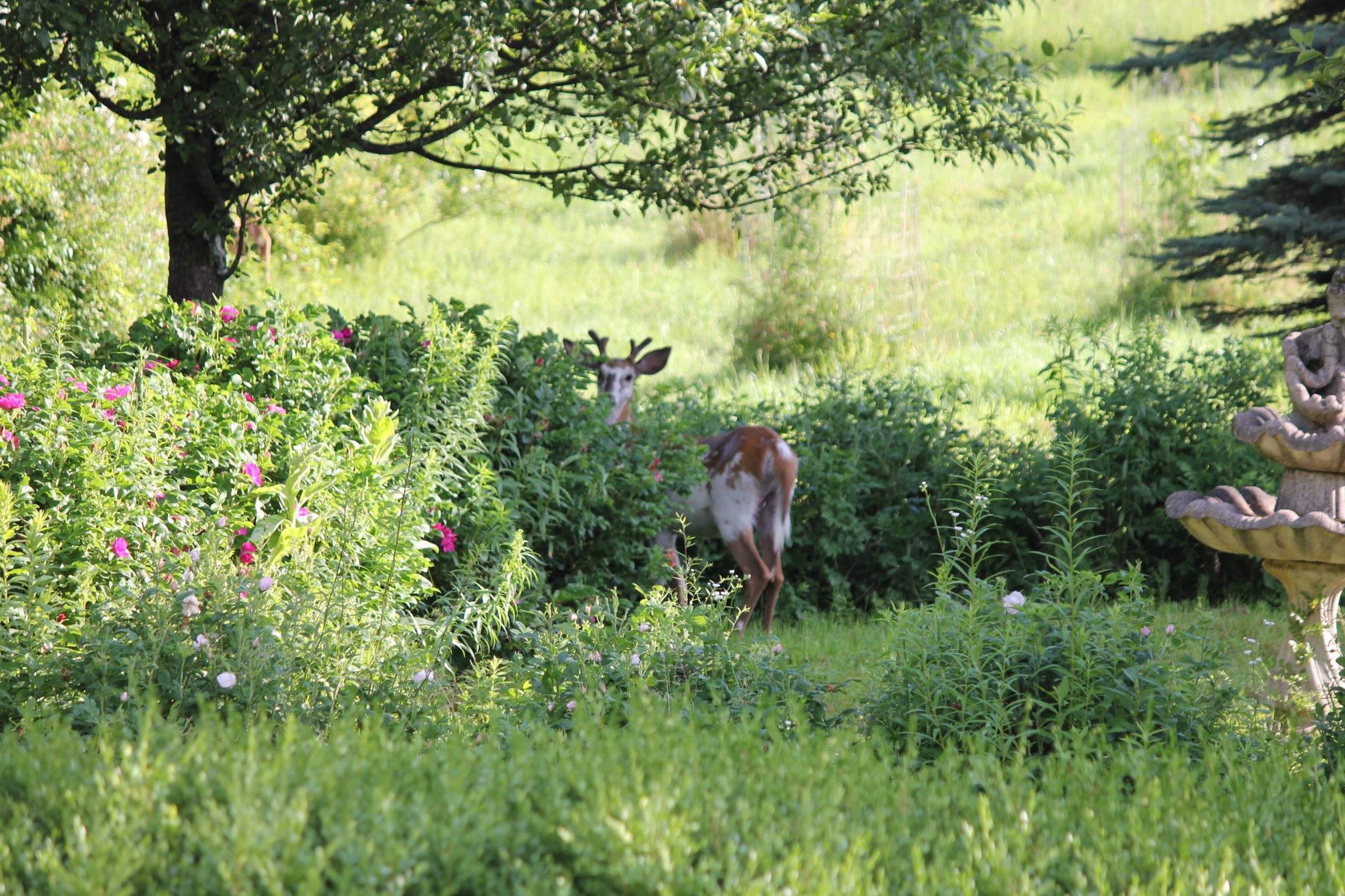 We’ve had our first bonfires of the summer, always paying attention to drought indicators and burning regulations. The first few took place a couple weeks ago after we put together a new fire pit. We dug a hole, filled it with gravel after having to build a drain ditch due to rain, then layered stone bricks around a metal lining. Then we began to burn yard waste from the winter and spring–fallen branches, trimmings, and so forth. This past Saturday night we had our first bonfire party. We had some neighbors over–one of them thrilled I had been born in Kentucky and also gone to Purdue. I topped off the party around midnight with some Kentucky Mules, with garden-fresh mint. It’s not often that I’ll run into Canadians who know much about my alma mater. Fire licked the sky, and as it got dark, a million stars came out. I can always see the Big Dipper first, not a constellation but what they call a pattern of stars, or an asterism.

I thought about the origins of bonfires, and had come across the origin of the word. Bon means good in French, but it is not the etymology for bonfire. Rather, in 1890, Websters stated that the true origin of bonfire was bonefire, which means a fire of bones. I like this origin. My friend Dara and I, back in Vancouver, would sometimes stare at our faux-stone fire pit, which was the only thing we could legally burn in the area. The stones, to us, after a certain amount of wine, appeared to be skulls or stone faces burning. We made up names for them, described who the horrible faces reminded us of.

Celtic midsummer festivals often burned animal bones to ward off evil spirits. In fact, The Irish Times, in an article by Patsy McGarry, called it a banefire, or a “fire where bones were burned”. He said that bonfire was pronounced bonefire when he was growing up, and that tine chnámh meant fire of bones. He referred to Mary Wrafter Heraty:

She wrote “Tine Cnámh, as Gaeilge, fire of bones, because in the past old bones were burned in the bonfire. The ashes were taken the following morning and symbolically spread on the land for the fruitfulness of crops.”

YourDictionary goes beyond ritual into the practical with the explanation: “Fires lit with bones instead of wood, so that when livestock were driven between two such fires the acrid smoke drove off parasites.”

In entertainment, bonfire becomes the name of Tarot cards, a heavy metal goth band, a short movie, a flannel shirt, a title for several books, a smokehouse restaurant, and a unique skeletal charger in Act V of the game Diablo.

But, for us, it’s a fire made of wood, used centrally as a place for celebration, a flame pointing upward to stars and constellations, a fire to roast food, an area for conversation.