The long winter I talked about in my last post hasn’t completely subsided. On Good Friday, we had an overnight ice storm and a layer of snow the next morning. It might also snow this weekend. But the days in between are growing longer and warmer. We’ve been doing little projects the past couple weeks. My husband bought a new sort of lawn mower/weed eater and cleared the meadow around all the trees we planted last year. He also trimmed the fruit trees, which are budding nicely just now. We will let the meadow grow back wild with only pathways so I can water things. A platform for the beehive is out there too. A friend came by to look at some roses for the taking and trimmed some of them. We have a patio off our sunroom that got terrible with creeping vines late last summer. I have cleared those off completely except for a few stubborn ones that I had to trim because I couldn’t physically pull them out.

The overwhelming color is still brown, however, and because the trees are only just starting to bud, you can still see the lake through the trees in the very back behind our meadow. 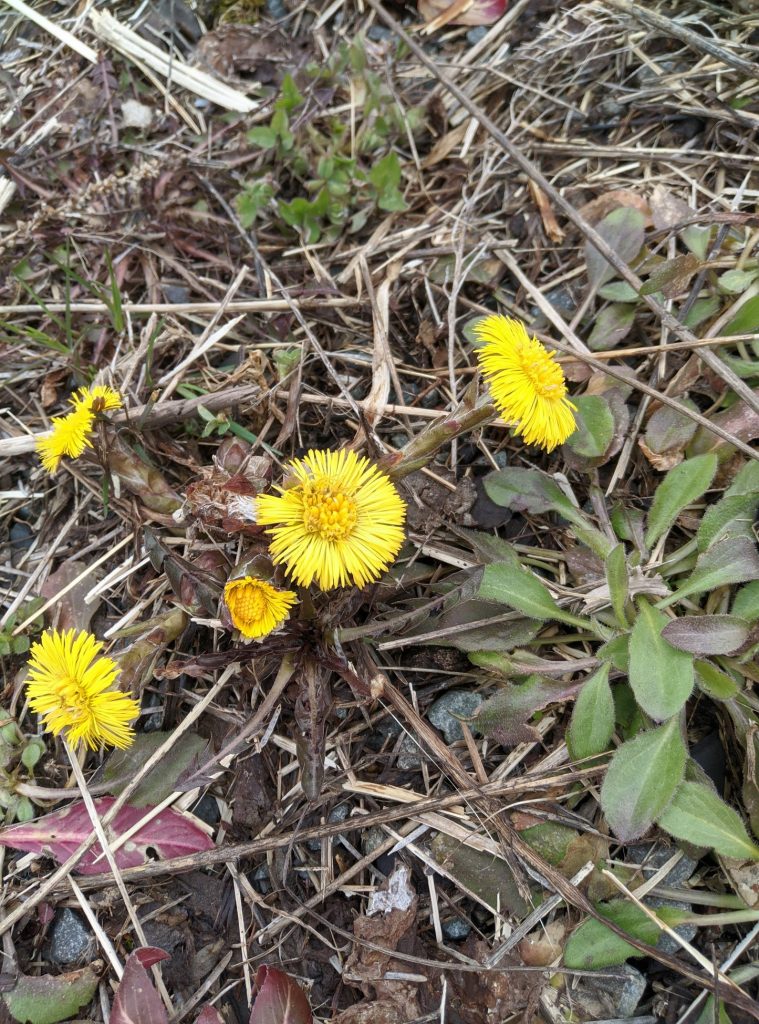 Our first bloom has been colt’s foot, which is in the daisy family and is not native to the area, though it’s believed that it might have some medicinal properties and that settlers brought it over from Europe, Asia, and North Africa. I didn’t notice it much last year; it resembles smaller dandelions. 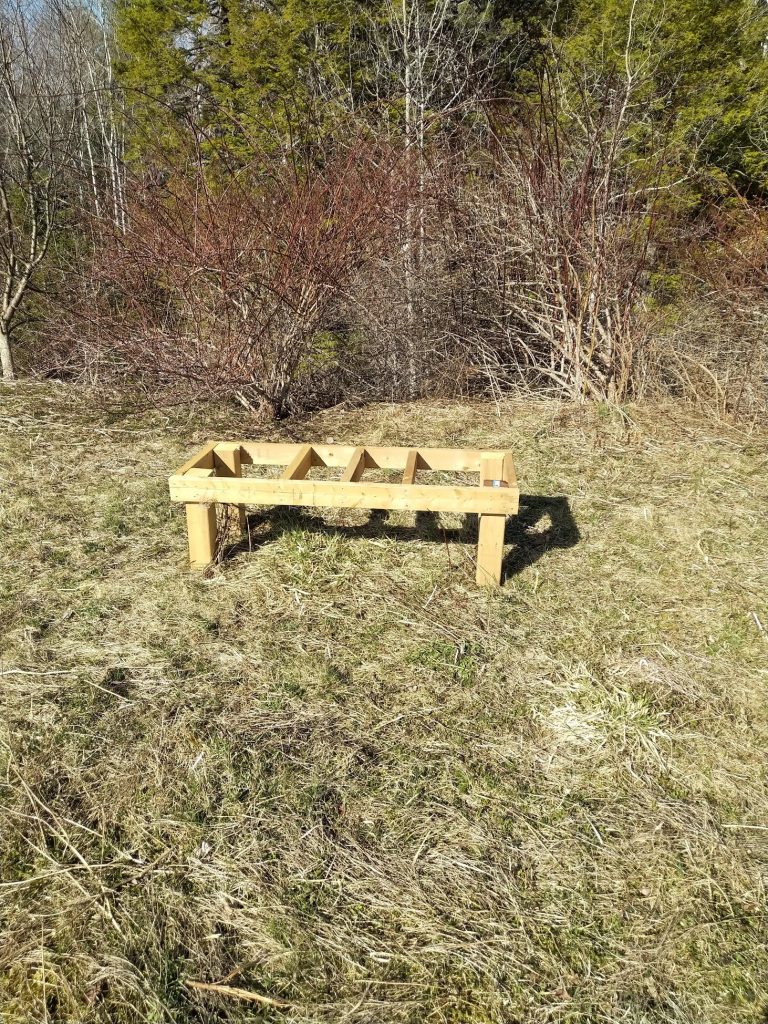 Here’s what we’re planting this year: corn, green beans, squash (in three sisters’ fashion), onions and green onions, turnips, beets, and leaf lettuce. Plus maybe some herbs, though I still have plenty of dried ones from last year. We have some germination pots, but I’ll be getting more next week. The tomatoes have to be planted soon, as they take the longest. I won’t plant the other stuff until the end of April, first of May, because our planting season doesn’t really start until early June. Summers seem hot here, and things grow pretty quickly. I’m so looking forward to starting a new garden! Every year we’ve had one, we’ve learned something new to take with us until the next season.

I learn a ton of stuff from Ron and Joanna Melchiore, who live off-grid north of us. Their site is here. I published Ron’s successful memoir Off Grid and Free: My Path to the Wilderness three years ago. I highly recommend this book if anyone’s interested in surviving off-grid and in the wilderness. At the time of the publication of his book, he and Joanna lived in the absolute wilderness in Saskatchewan and had been for years. They have a ton of tips about their life, from gardening to managing woodlots sustainably to installing solar and wind turbines–but Off Grid is just mostly a story of adventure on a different path. 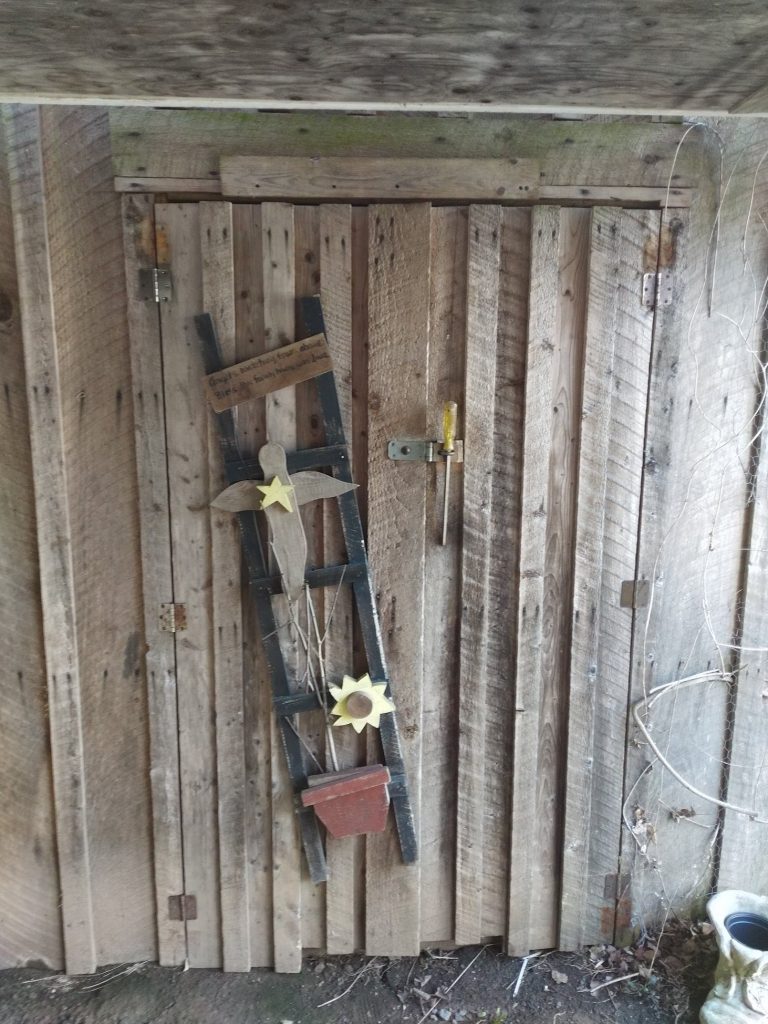 Trusty shed where all the gardening tools are, complete with a Nova Scotia security system

I think I mentioned also that we ordered some new fruit and other trees and bushes that will line our front yard and be an addition to our back yard: pawpaws, blueberries, mulberries, strawberries, gooseberries, haskaps, and a mountain ash (or rowan) trees, along with some lilacs. For each tree, once again we’ll needed to build mounds for planting, since our soil has a lot of clay, do the planting, fit a protective fencing around each tree–to keep away deer–and water the trees every day for a good while, then down to every other day, etc. I’m going to end my post with an inventory of flora and fauna again, this time with new things: