It’s that time of year that everything in our lives is busy: personal projects, work, and tending to the garden and meadow. Somehow our meadow turned from a brown place where buds were barely starting to a wild, vibrant, green space where the fruit trees (pear, crab apple, cherry, apple, plum) began to bud and prosper–the earliest of which, a cherry, is already dropping its pink-white petals. The petals float down to the gardens like large warm snowflakes. We’ve seen deer and also discovered a groundhog living beneath our shed. Research shows that they can build elaborate tunnels and even wreck roots. One day while Morgan was out, he saw a garter snake flitting through the weeds. That’s the first snake we’ve seen. 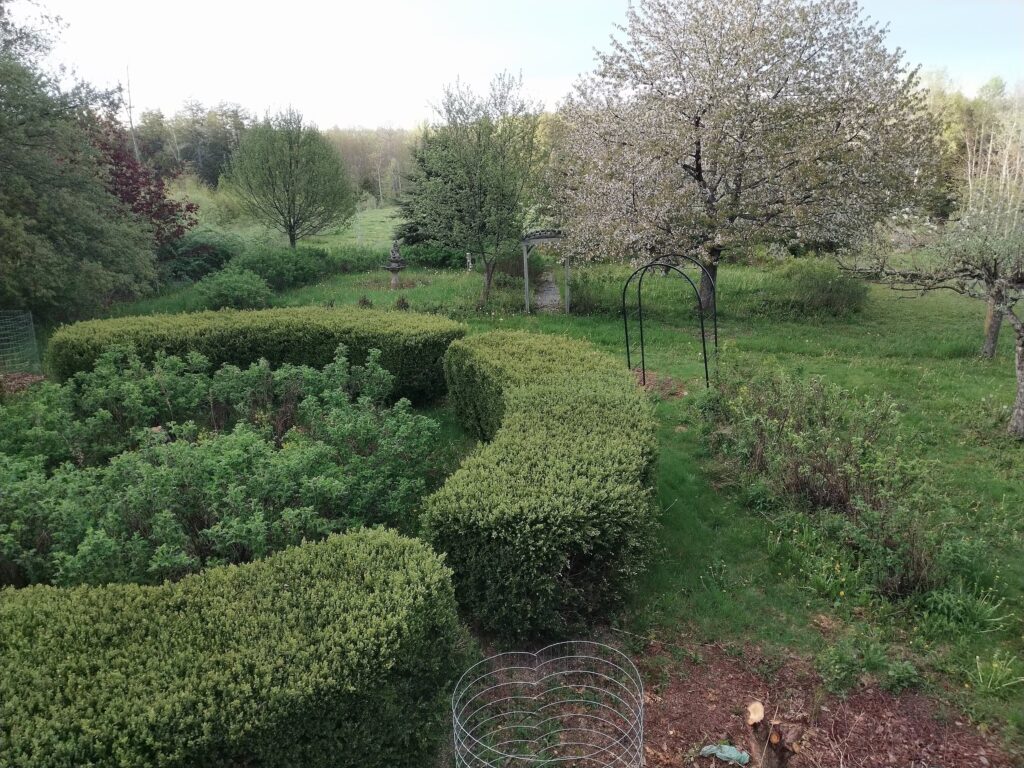 Looking out over garden and meadows, with a newly planted peach tree up close (in a fence)

We’ve been busy lately and have also received all our new trees and bushes (mostly bushes and smaller plants like strawberries). We’ve planted them all and built new fencing around them to keep out the deer and re-fenced some of trees we planted last year. All those trees have budded or leafed! The only ones I’m unsure about are the hackberries. 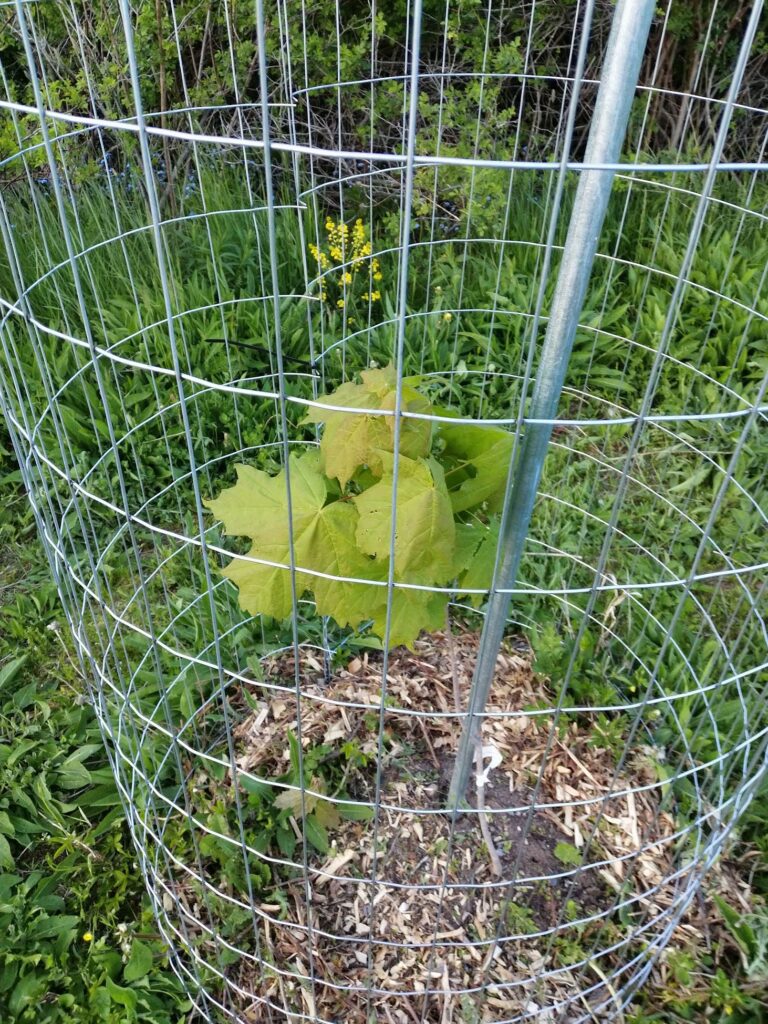 The only thing left to do is to plant our garden and build a new fence around it and the strawberry patch. We don’t plant until late May or early June here, due to frost at night. While I was raking soil over the new patch, I was weeding the edges and discovered a song sparrow nest. I quickly re-covered it with nesting materials like weeds and grasses. 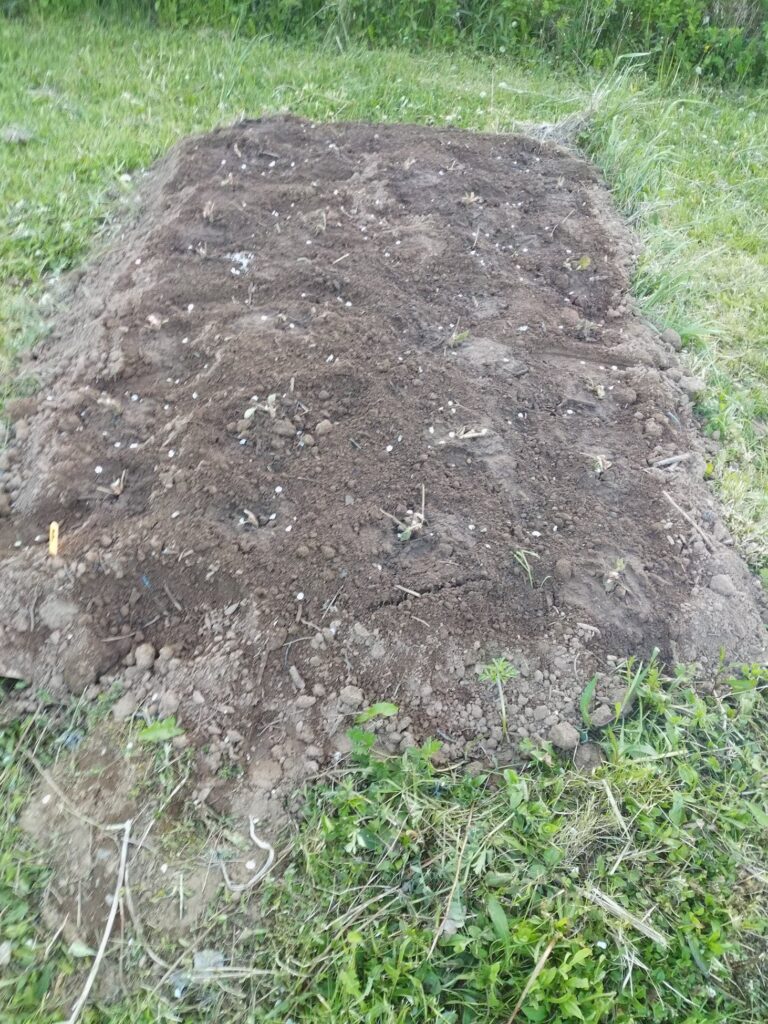 The strawberry patch looks like a burial mound, but it is full of new strawberries, really! 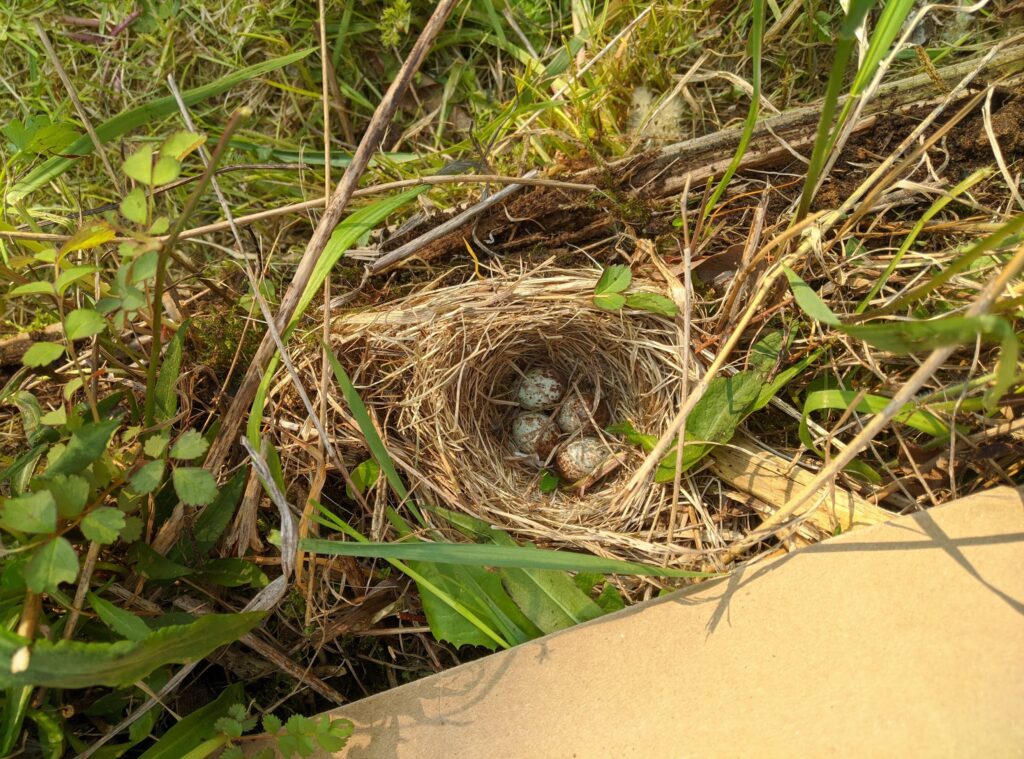 Song sparrow nest on the ground 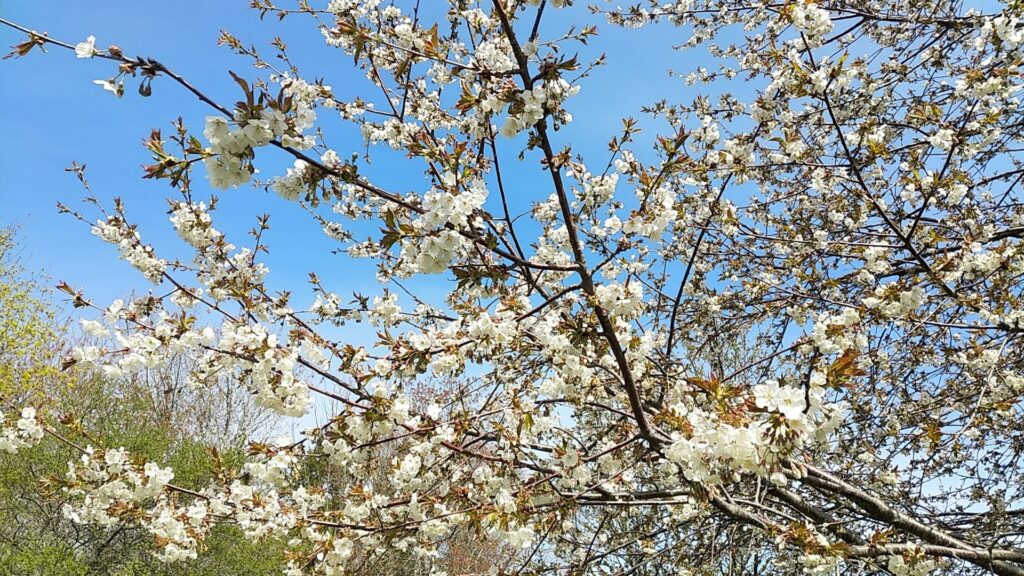 The cherry tree is always the first to blossom

As an aside, our Rewilding Our Stories Discord is reading Robin Wall Kimmerer’s Braiding Sweetgrass, and I was so busy with other things that I got behind this week but am now catching up. So much of her book parallels our own experiences with rewilding our yard and ensuring a haven for bees, birds, and other wildlife. We’re planting new things this year that are native to the area; it seems the previous owners did some of that as well, but they were really more concerned about appearances and some landscaping (i.e. the rose gardens near the house) than more of a wild haven. But Robin’s book is excellent. I read at night until I fall asleep, after tiring days of doing a variety of projects, indoors and out. I just finished the chapter on three sisters, which gives me insight into our own planting of this trio (corn, beans, and squash). But Robin’s book also dishes out wise memories and ideas, seemingly Indigenous in nature for the most part, that impart meaning and origin stories around the same kind of work we’re doing. I’m really enjoying it. 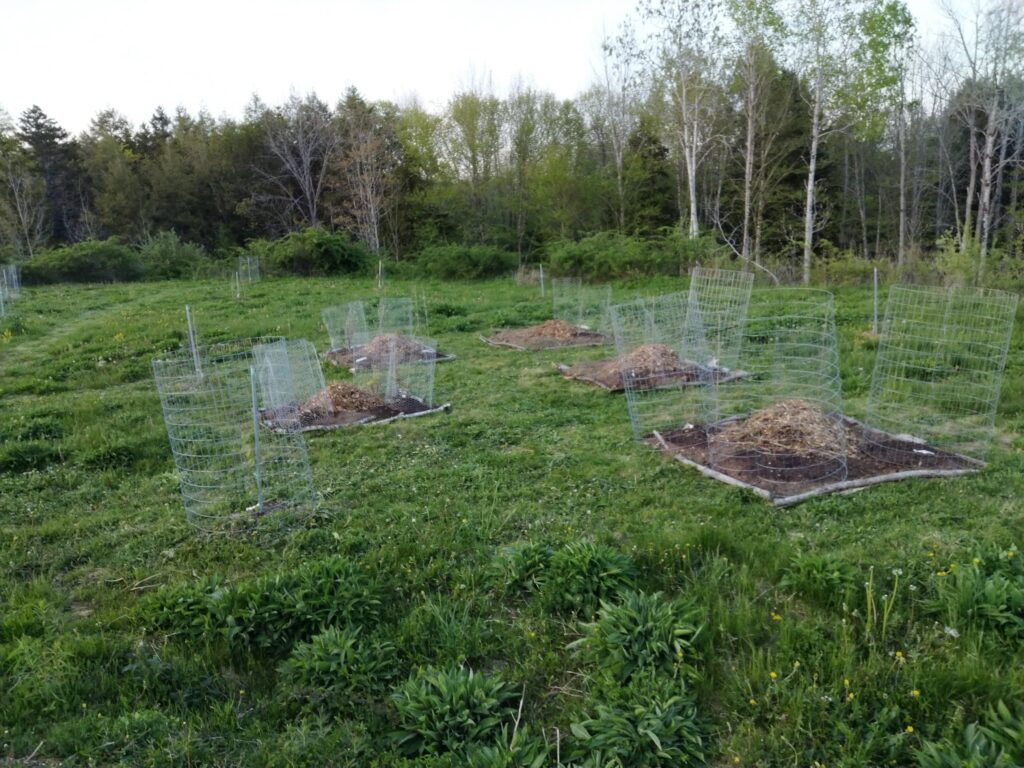 The thing I must admit is that we’re always learning from mistakes. From early to mid-April I began germinating several things in our garage: tomatoes, cucumbers, onions, lettuce, dill. The garage is heated and covered in solar panels, and I put everything on a table next to a sunny window. Absolutely nothing came up. It was just so weird. We had tried some new peat pots this year, so maybe they weren’t good? The bottoms of them began to mold, but I mechanically removed that as soon as I noticed. I ended up planting new seeds in more traditional planters, but by then it was pretty late to be starting seeds. At least now everything has sprouted, but won’t be ready to plant quite yet. 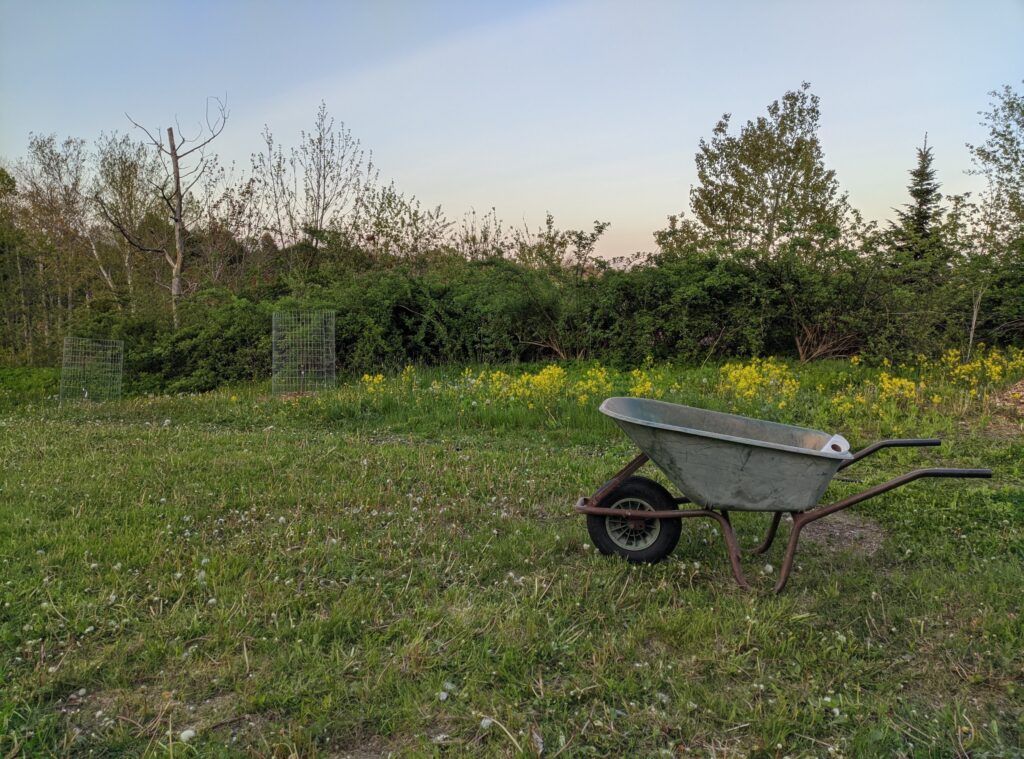 This coming weekend we’ll plant corn, beans, and squash, just as Robin’s book said to do (in square feet–the corn grows first, the beans near enough to the corn to grow up the stalks, and a squash nearby). I learned so much from her book, like how beans are nitrogen-fixing and how healthy eating corn and beans is! 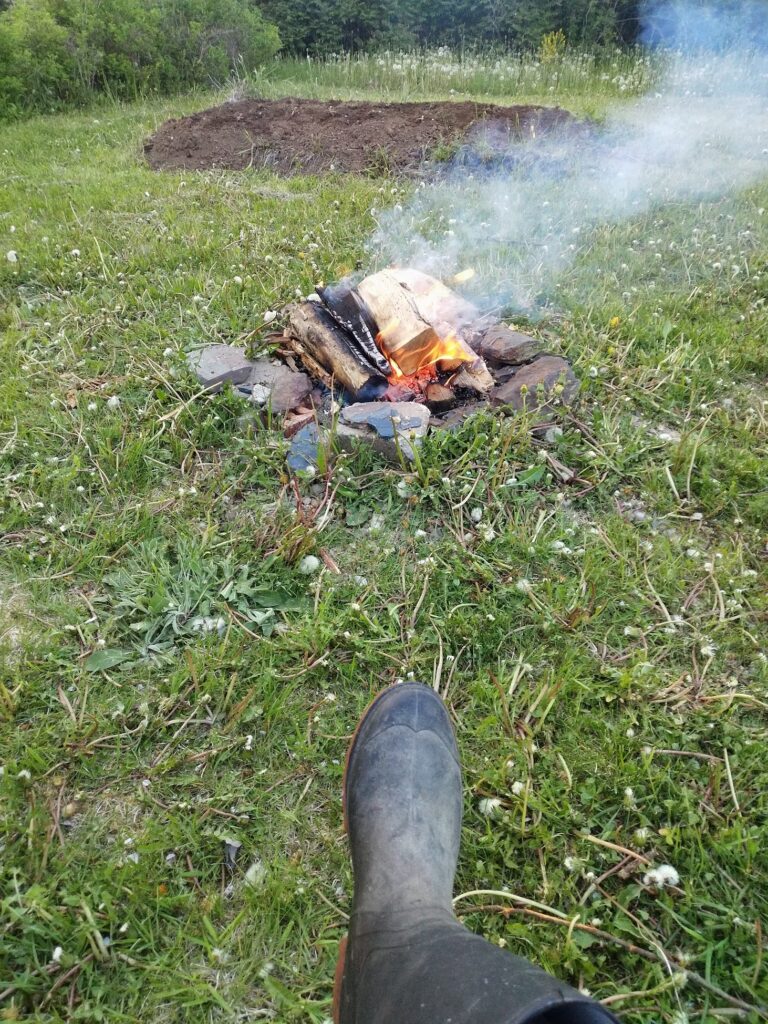 Gazing at a late evening bonfire start, that’s me and a my filthy gumboot

Our 15th anniversary was this past week and to celebrate we picked up some Greek food to bring back home, and they gave us two free beers. We hadn’t had restaurant food for ages, and I really missed it, but nothing will ever come close to My Greek Taverna back in Burnaby, BC. We also had our first bonfire a couple nights later, but it was cut short by a Zoom meeting later that night with my high school friends. I’m looking forward to more bonfires, more spring, and the summer. It’s almost here, folks! And, though our province began to get a high amount of Covid cases in April, the numbers are finally starting to come down. I hope we can have bonfire parties with others again soon, which aren’t big–generally 4-10 adults and two children. We have been in lockdown again so haven’t been able to have any lately, but I believe now that vaccinations are increasing and cases are dropping, Nova Scotia will at least partially open up things again soon. 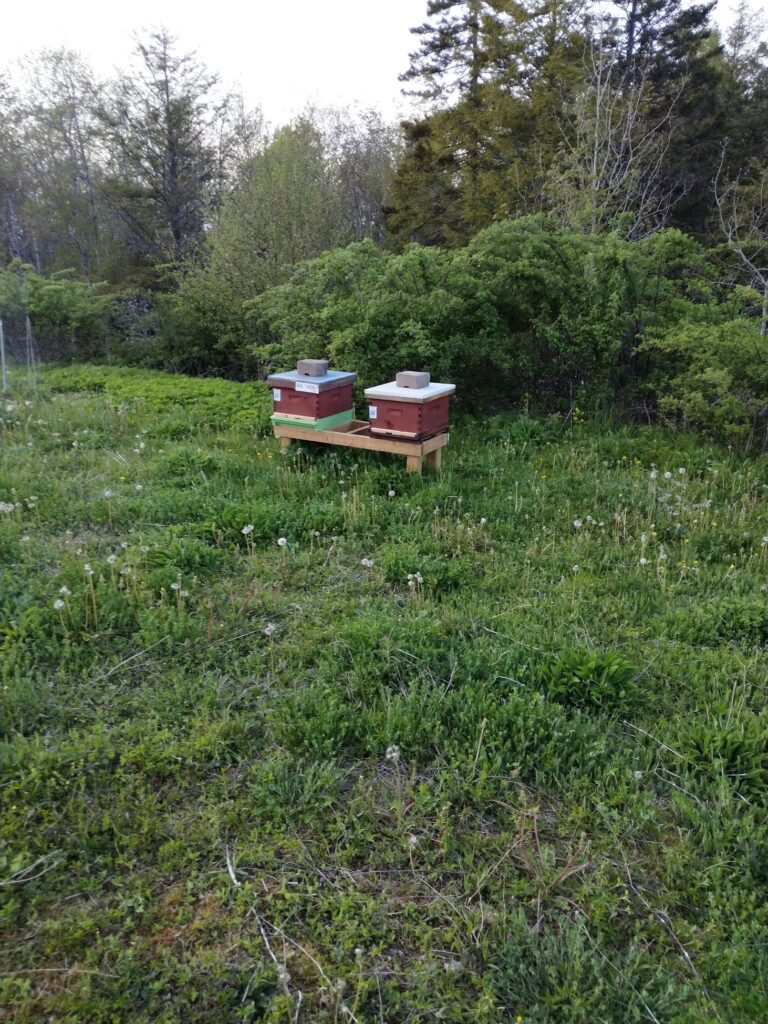 Bees at the far side of the meadow

Trees and bushes we’ve planted in 2020