It’s already August, almost fall here, but you wouldn’t know it. Nova Scotia has had hotter than normal weather this summer and a high humidex, making it rather uncomfortable with no air-conditioning. But so far we’re okay, staying hydrated. I guess we were lucky to have the stormfront of tropical storm Iasias miss the predicted trajectory to the Atlantic coastline and head inward instead. The average high for July and August is 23 degrees. We’ve had multiple days and even weeks now of near or over 30 degrees and several heat warnings. We went for a while with no rain and were under a fire ban. In the last couple weeks, some rain has returned, but not enough. I’m still out there watering our new trees, and all are doing fantastically so far, despite the heat. None seem to be stressed.

There’s a certain unity with the land once you grow and use things from it. From the garden, I’ve gotten a lot of green beans so far as well as snow peas. I’ve dried and frozen all the beans I’ve picked so far (a humongous bowl!) in order to make shucky beans, a traditional staple from eastern Kentucky, where my mother was raised. Tomatoes are growing nicely, though aren’t ripe yet. (I may pick a green one just for fried green tomatoes; I get so excited about the southern foods I miss!) I’ve also used cilantro from the garden and wild grape leaves from the meadow. 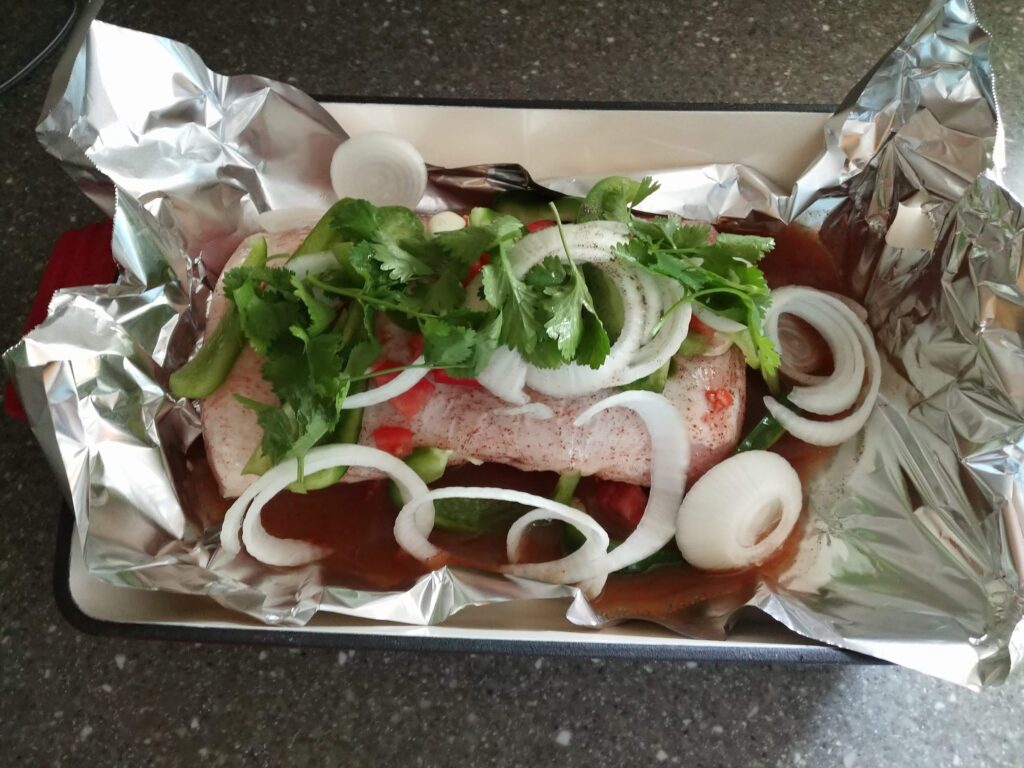 My cochinita pibil, with cilantro from the garden 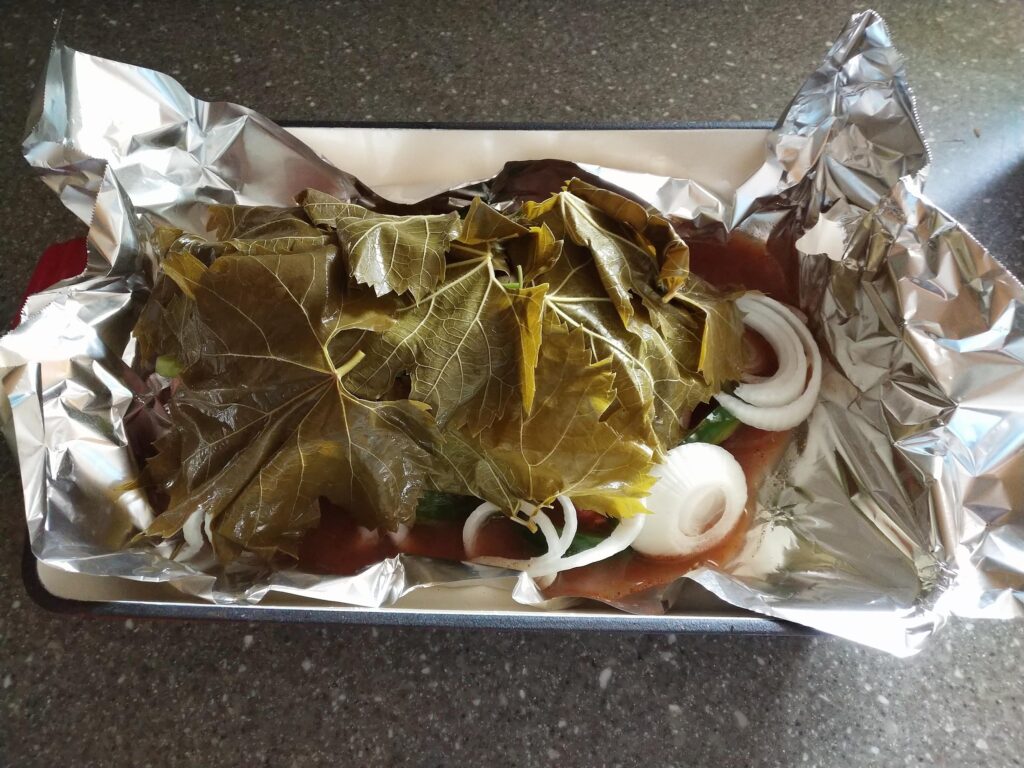 I couldn’t find any banana leaves, as is normal to wrap the pork in, so used grape leaves from the wild grapes in the meadow 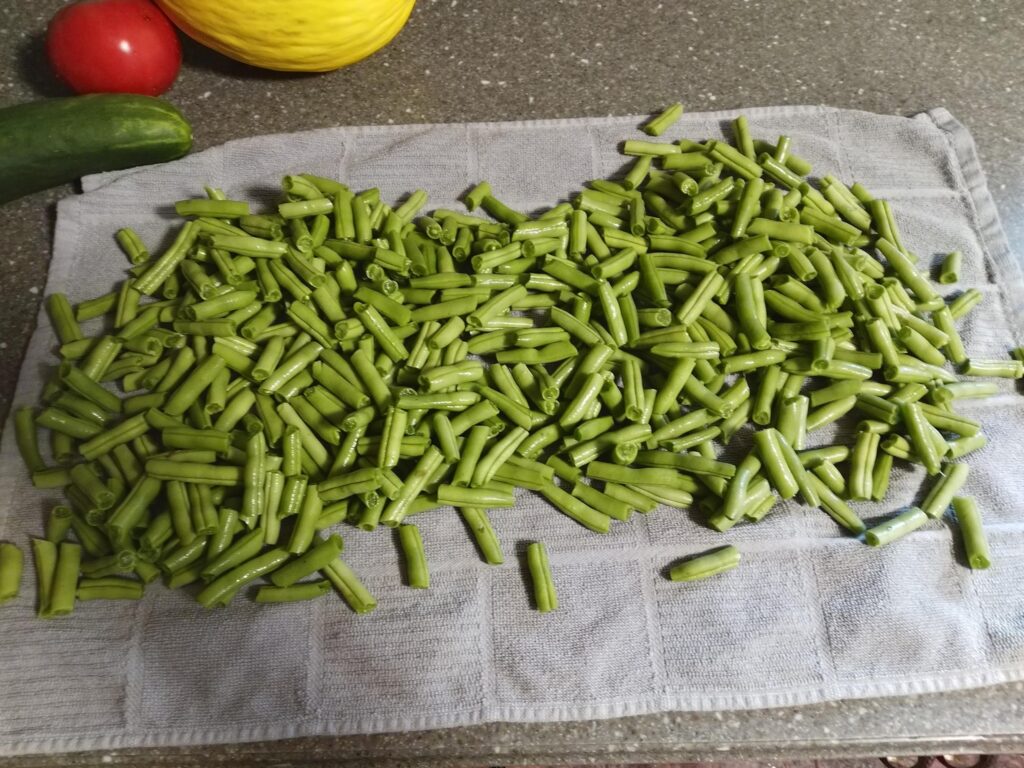 Many beans, many beans – from the garden

The meadow is where I go to water all the trees and just kind of mellow out for a while, as it usually takes a while to water all those trees. My writing office faces the back acreage, and I’m always listening to the various birds, wind, and insects–but you’ll find me zoning out in the meadow listening to Jimi Hendrix on my headphones while I’m dragging a heavy hose all over the place, getting tanned and spraying myself to keep cool, with the misty water nozzle on the hose. 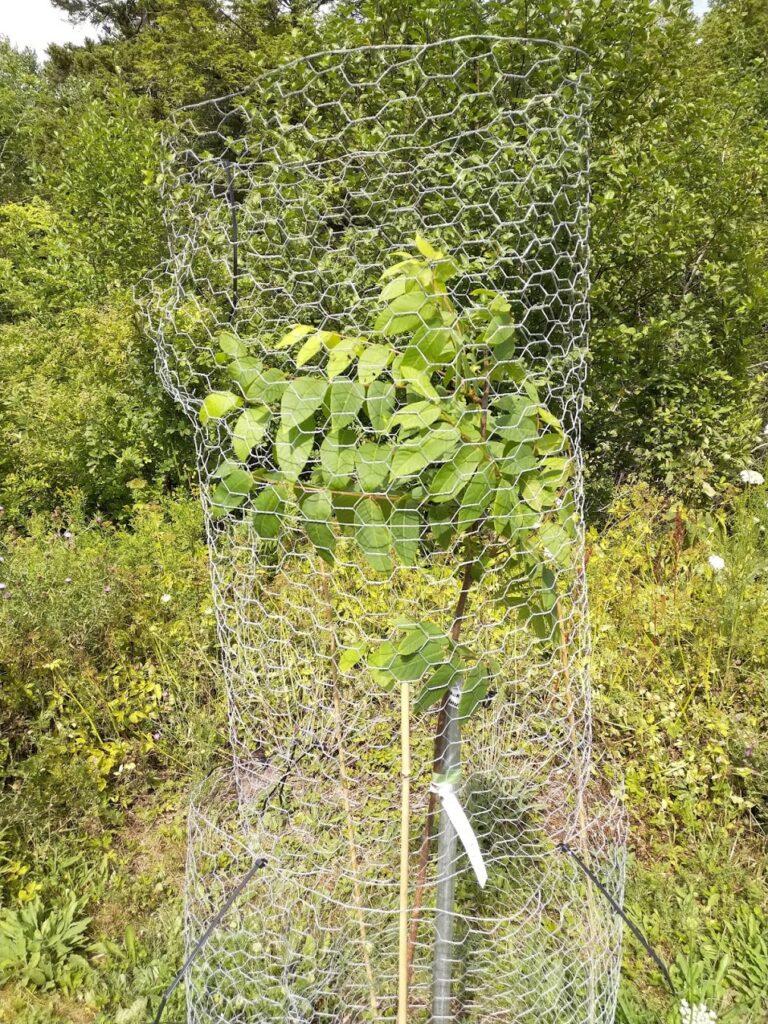 We set out to do away with any landscaping around here like the previous owners had. We kept their rose gardens but are not mowing back in the yard at all, except around the bonfire and closer gardens and, in the back 1/3rd acre, mowing a few paths so I can navigate the tall grasses in order to drag the hoses around for watering the trees.

We’re doing another bonfire Friday night. I built our pit behind the veggie garden but before the meadow–since at night it’s so dark out there if you have to come in, it’s hard to find your way to the house without a flashlight. 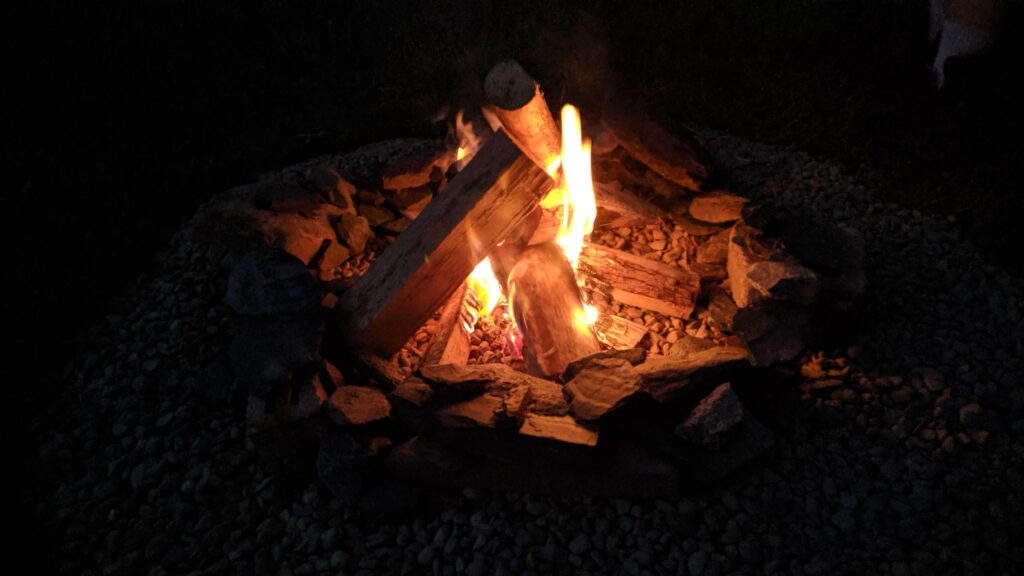 We’re letting things just be as they are, and the previous owners did nothing with the meadow except put a golf hole out there and a bonfire pit–but they did mow it. The Queen Anne’s Lace is super tall now and the white giants mingle with the shorter wildflowers: the yellows of wild mustard, spurge, buttercup, and goldenrod and the purples of columbine, dame’s rocket, and thistle. Just this past week some sunflowers bloomed out by the old firepit. I noticed nearby seeds and wondered if previously someone had put some birdseed out there with sunflower seed. Just letting the meadow be attracts thousands of butterflies and bees. Birds love the yard for the insects and even fruit trees (which now have cherries, pears, and apples–even noticed some wild grapes). I learned that cardinals, finches, nuthatches, and blue jays love sunflowers. I’m hoping they spread out to the rest of the yard, though at some point the 28 trees will be growing tall enough to start shading everything, but not for a few years. 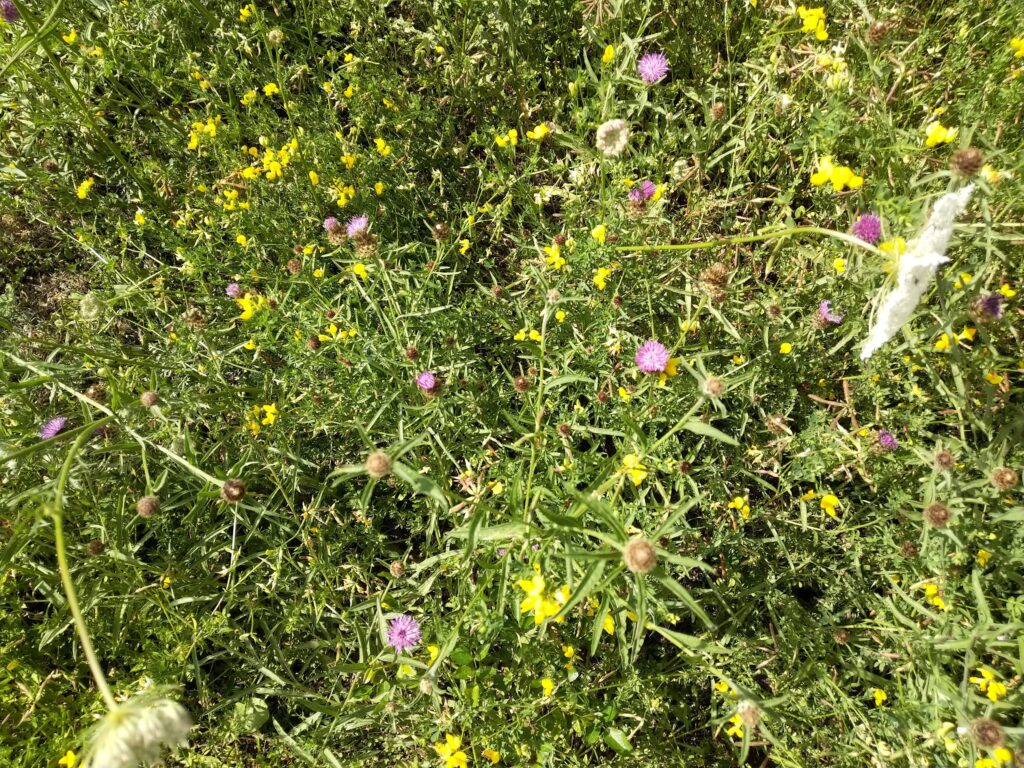 I’ve updated the list of things found in the yard overall, and it still seems there are a thousand insects I have not quite identified yet, but I know that our yard is teeming with them! The other night I was sitting on the front porch and thought a large dragonfly had come over to visit, but it was a hummingbird! Anyway, the goal is to let things grow wild in order to attract more wildlife to the yard. Weirdly, we haven’t seen many mammals other than those listed below. No porcupines, raccoons, rabbits, or chipmunks so far. Of course, we’re not out there all the time, and when we are, the critters probably keep to themselves. I’ve been emailing with author Ron Melchiore lately, whose book Off Grid and Free: My Path to the Wilderness I published a couple years ago. Since the publication of that book, he and his wife have moved from the wilds of Saskatchewan to Nova Scotia–just further north and right on the coast from us. They built their own off-grid home again, and Ron has a new book out, The Self-Sufficient Backyard. He told me about their mice, squirrel, and chipmunks. Ron is my role-model for all things gardening and growing. 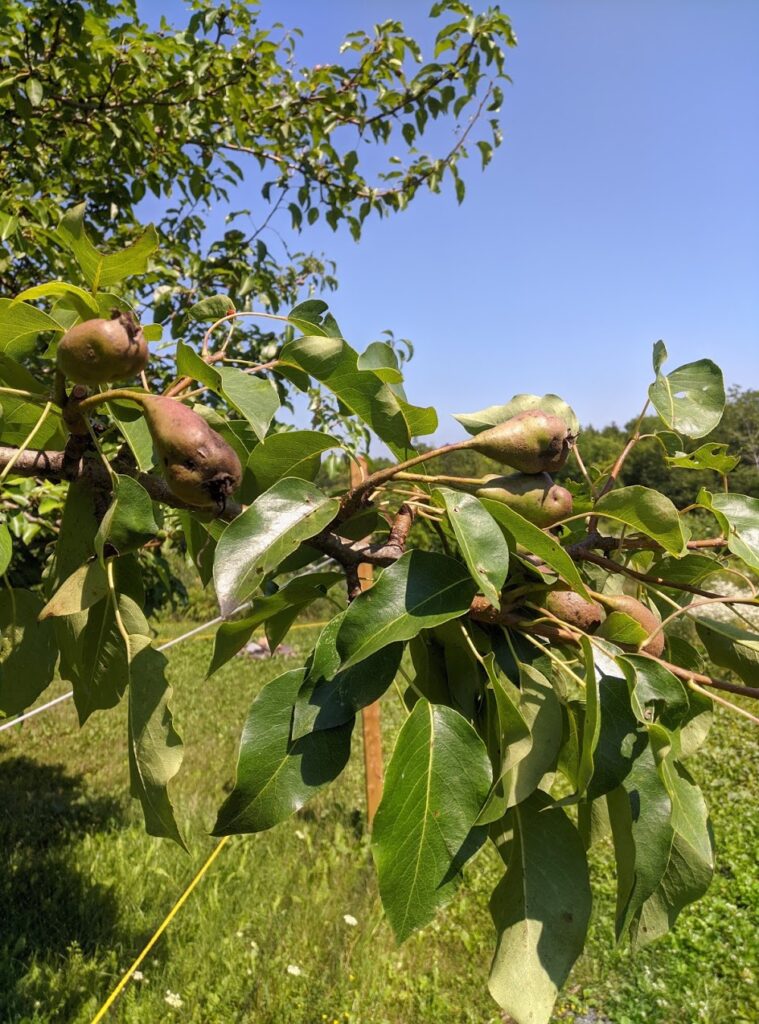 This may be my last post of the summer, but in some ways the move has been a like a carousel, and I haven’t quite gotten my bearings–from the changed world due to Covid-19 to the worsening and deadly politics of Trump and his sadly complicit conservative party to the ongoing and ever-more-present evidence of climate change. I’m having trouble finding footing again for life’s routines, but I do find sanctuary in a meadow listening to Jimi Hendrix and spraying myself with hose water during these hot and humid days, and I also look forward to my favorite season, the fall. But I can’t let go of summer yet.