In the last month or so, we’ve had a range of crazy weather. First, a couple heat waves blanketed us, but nothing like last year and nothing like out West in the past several weeks. Our relatives and friends in BC, where we lived for eight years, have been threatened by wildfires and gone through impossible heat waves that killed hundreds of people. Here on the east coast we’ve had plenty of rain, plenty of pleasant weather too, but also Elsa–which flooded New York City and some parts of Connecticut, shown in scary photos–visited us as a post-tropical-storm this past Friday night and early Saturday morning, and we had heavy gusts of wind all night on Friday, and lots of rain. Our power was out all night. I did the usual: played some guitar and wrote in a notebook, my brain not able to calm or settle while the winds and rain roared outside. The next morning I checked the garden, and only about half the corn stalks, which were not quite knee high by the fourth of July, were blown sideways. I was able to fix them, and they seem healthy now. 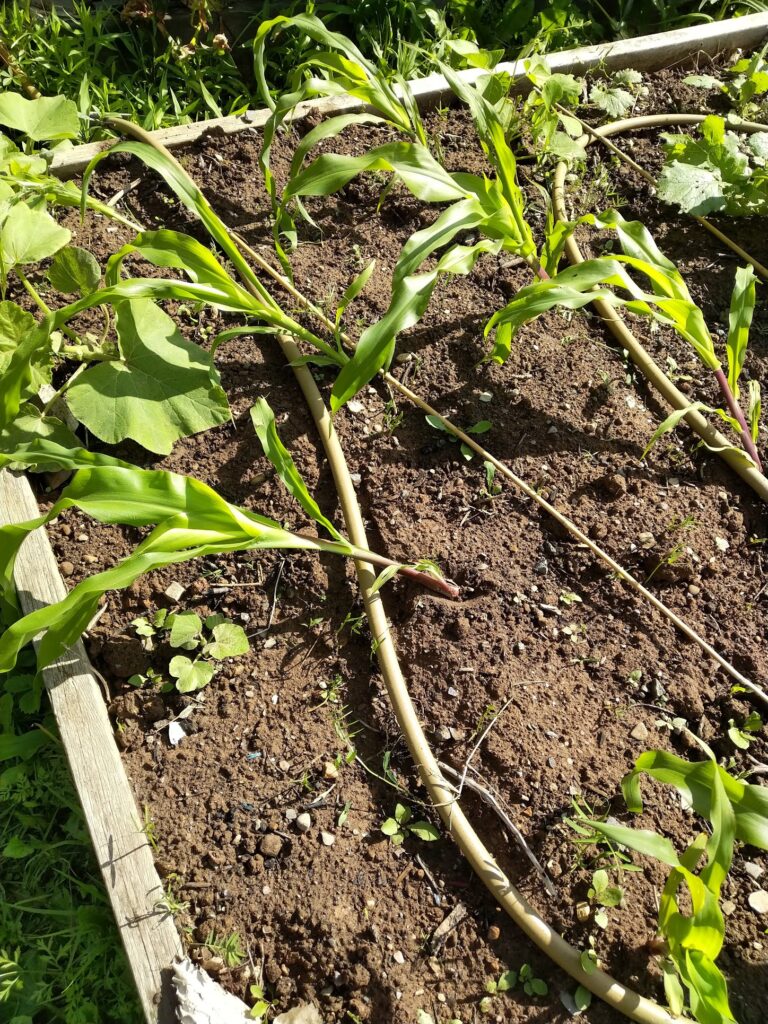 On the night that Elsa came our way, my husband and I sat up late and chatted about various things, one of them being the novel I’m writing. He has so much technical knowledge and imagination that he was able to help me with some of the ideas I had, like how would satellite radio work eighty years from now? Would the satellites even have power to them? How do my characters travel from the west coast of Canada to the east coast? I’m excited to write more after he gave me some ideas. 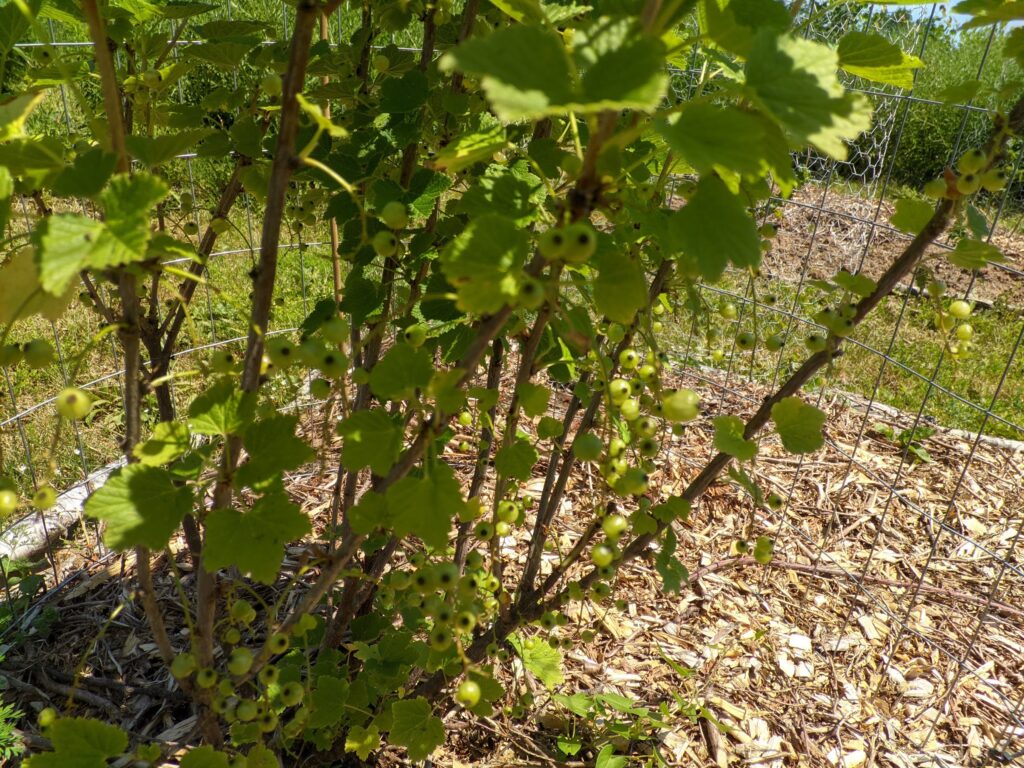 Blueberries. They are already ripening enough to munch on!

It has been hitting me lately, and for quite some time, actually, that what we perceive of as science fiction, environmental fiction, eco-fiction, whatever you want to call it, it is not always speculative because it’s already happening now. And none of these genres are ever necessarily set in the future. In fact, how do we imagine the future when we’re already experiencing it? Or literally: yesterday’s speculation is coming true? In an interview I had with Matt Bell, author of Appleseed, we talked about this. He said:

One of the things speculative fiction is best for is allowing us to “imagine otherwise,” as Daniel Heath Justice says, imagining other worlds than the one we live in. Some of those worlds are warnings about what might go wrong if we continue on our current paths. Others are visions of futures we might choose instead, if we make changes to our ways of life, if we reshape our societies in different ways. It’s very hard to arrive at a better kind of future if you can’t imagine what it would be like to live in it: that’s one of the things novels and films and other mode of storytelling can do to help us, in addition to being entertaining.

As an environmental fiction writer who also lives a rewilded lifestyle, I’m constantly consumed by the changes and forces in our world that take away progress on climate, ecological, and social justice. Like, there’s not really a day goes by that I don’t think on these things. I think most artists who deal with these issues in their art, whether it’s writing, painting, photography, filming, and so on, somehow manage to have these subjects on their minds but not always necessarily with a total head space of gloom and doom. That’s why I think it’s important, like Matt said, that we have to imagine and actively persist for our futures to be better. If we can’t imagine it, like in storytelling, how do we make it so? 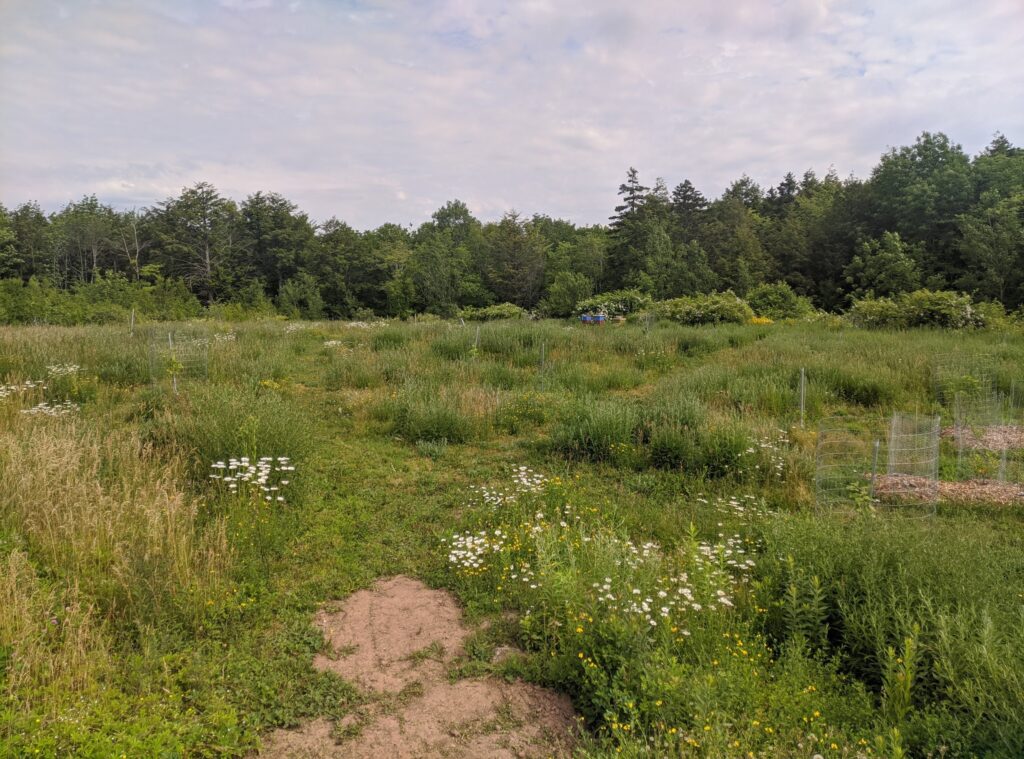 The meadow. In the very back, if you enlarge this, you can see the trees better as well as bee hives.

Around the meadow and gardens lately I’ve noticed one snake, and Morgan has seen two. The other morning around four a.m., it sounded like someone was breaking into the balcony outside our kitchen. Armed with my phone (sleepily wondering if I would need to call for help), I became amused at the cats staring at the screen where the tiniest mouse was climbing (on the outside of course). Because one of our cats likes to swat at things through the screen, and actually dazed a June bug once, I was worried it had harmed the mouse. The mouse actually fell off the screen and scurried off. There’s never a lack of interesting things happening, that’s for sure. 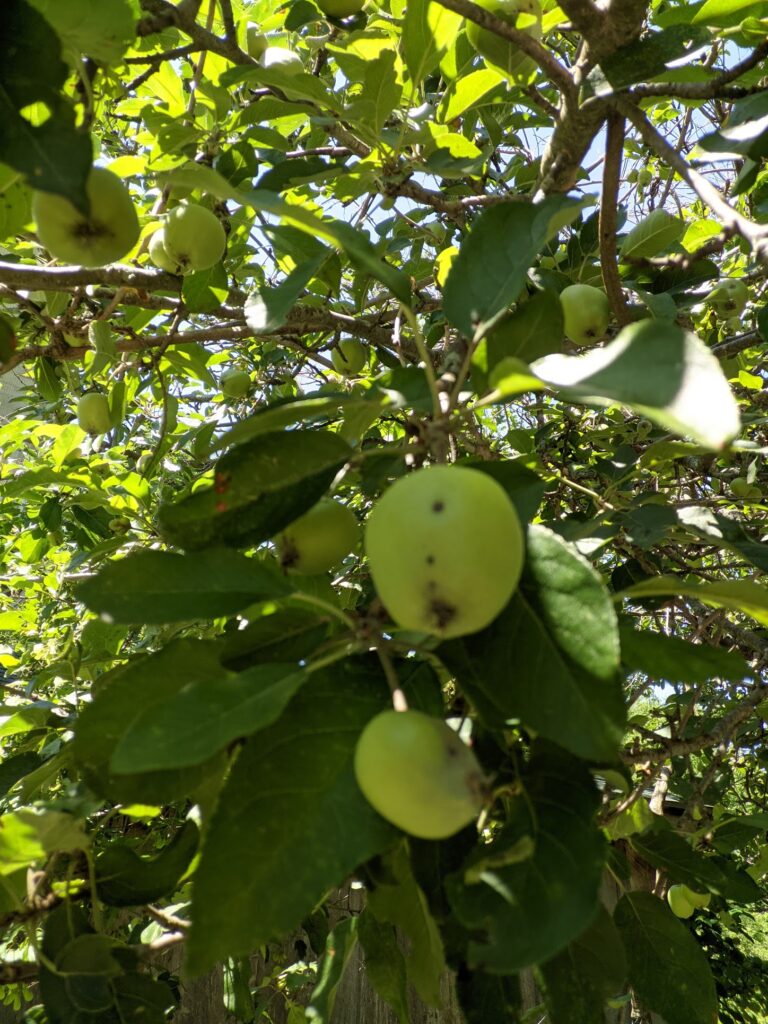 Because of more rain this year, I don’t have to water the trees nearly as often. Deer have come into the yard and something (possibly the deer?) seemed to have bent over some of our new hazelnut trees, but we were able to fix them. That was before Elsa got here. 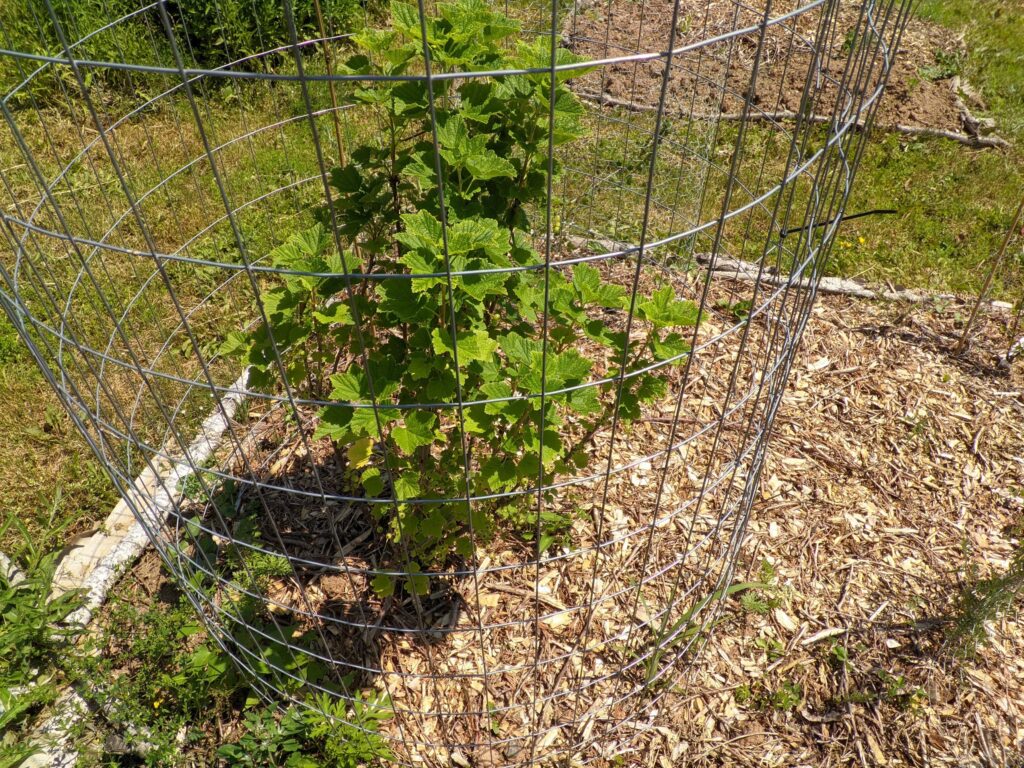 Currant bush, one of the new bushes planted this year.

Oh, and one thing I’ve been sad about is that we have not heard any crickets this year, whereas last year they sang to their heart’s content from June to late summer, even into September, I think. I haven’t yet researched why this might be.

And, finally, I have begun a faerie tree project, but don’t want to get too gaudy with it.

Faerie tree with a wind chime, solar owl light, and some kind of little faerie statue

Trees and bushes we’ve planted in 2020