It is officially my favorite time of year. A tingle is in the air. Summer lingers, but things are slowly changing to magnificent colors. At the same time, we are reminded of the cycle of life as the meadow turns brown and the Queen Anne’s Lace shrivels to a small shadow of its former blossoming self. The maples and oaks and other hardwood leaves are turning orange, red, golden. The grass is not yet covered in leaves. That will come in a matter of days or weeks. It’s that tingle, a more positive cousin of the chill crawling up my spine as I read and watch the frightening stories of the season. My favorite is The Witch.

Increasingly, our world has more horrors than it seems it used to have. I admit to trying to escape reality, or at least compartmentalize it so that I don’t get overwhelmed, and instead I like to pay attention to the changing seasons, the continuity that the seasons have always offered us. How I wish that were forever true, but it isn’t and hasn’t been for a while. It reminds me of an epigraph from Ali Smith’s Seasons Quartet’s Autumn: “Britain may have only 100 harvests left.”

As usual, our life consists of work during the day and working outside on the weekends. Outdoor work is winding down, but we still have some stuff to do. When the corn is done and the last of the squash and beets are picked, we’ll dig out the garden and winterize it. We’ll also cover the strawberry patch with straw. And then it’s just a matter of winter, which is coming! Lots of shoveling, keeping stocked up on firewood inside, and ensuring that we get the snow off the solar panels. We’ve already brought in our 400 feet of hose, which is what we use for watering our new trees during dry weather.

It’s not all fun and games, for sure. We had a moth infestation over the summer, and now it’s died down, but we were finding sometimes ten moths at night flying around inside and had no idea how they came in. Since we’ve moved here, we’ve also found four mice in the house. The first two got let in when a worker was here installing something and left the door open. The third happened the same way. The fourth, I think, came in with a load of firewood, so now I’m careful and check each log. We have some ethical traps, so, except for the first mouse that the cats killed, we just take them back outside and let them back into the yard.

Then the other day we saw some seed-infested poop on our sunroom front porch, and we’d not seen it before. Morgan finally shoveled it up, but was careful in case it was from a raccoon, since they carry  round worms (Baylisascaris procyonis) that can cause a rare but dangerous disease if inhaled or ingested. But I have not once seen a raccoon in our yard–unlike where we used to live on the west coast where we typically had families of raccoons nearby. So, it could have been coyote poop as well. No “raccoon latrine” followed, which was good–but occasionally at night we’ve been hearing some nearby yip-yips or howling. When I say that not all is fun and games, I mean, having coyotes nearby is actually cool. I used to live near a community of them in southern California, and the sounds at night were beautiful, and sometimes I’d see them on the trail. It’s just that we have to be ever aware of nearby animals and ensure that they’re not coming in and that we respect them while in the wild. We did have our house and attic checked a few weeks ago because Morgan was afraid a bird had gotten in, but there were no signs of animals up there.

At night, we often have a bonfire or just sit out on the deck with the smaller fire and watch the deer and then the stars.

We’re drying the corn out for corn meal. It’s about ready to pick. 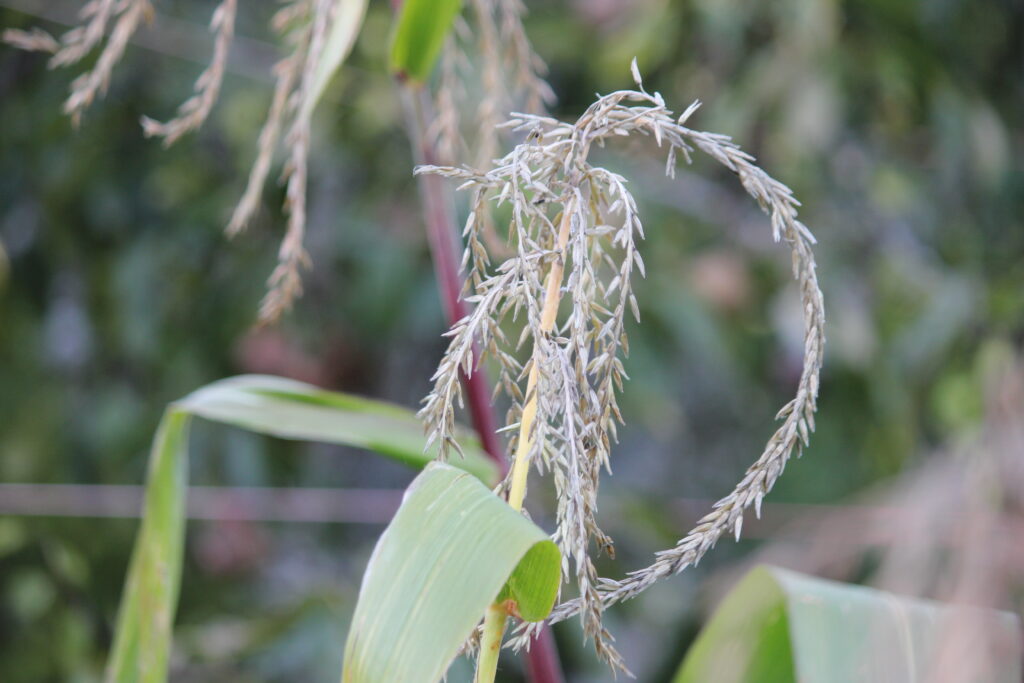 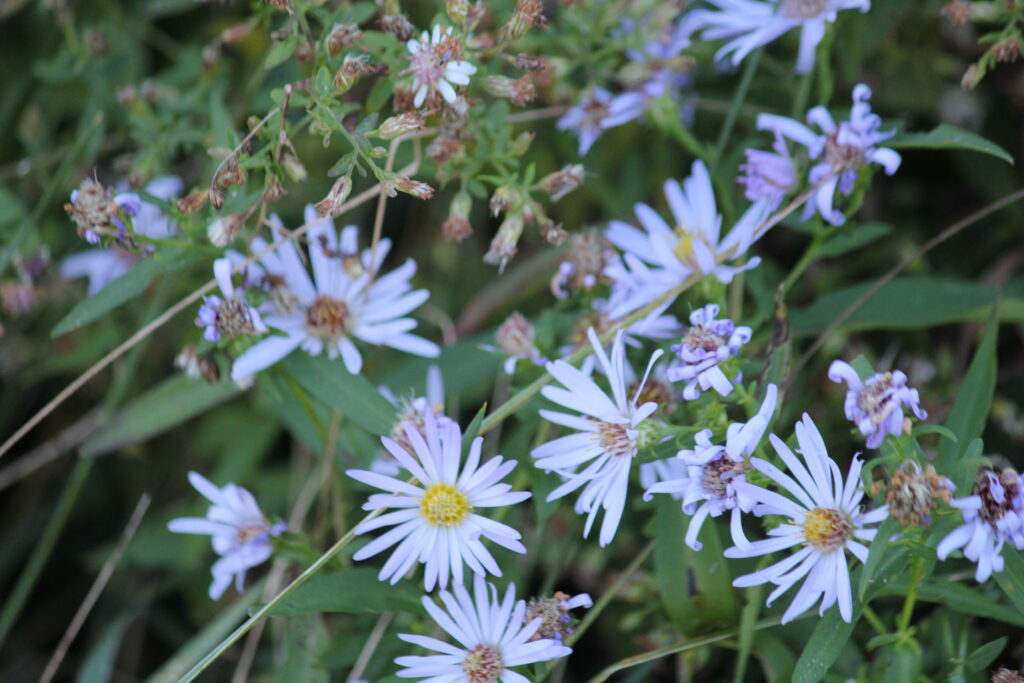 I think these are asters! 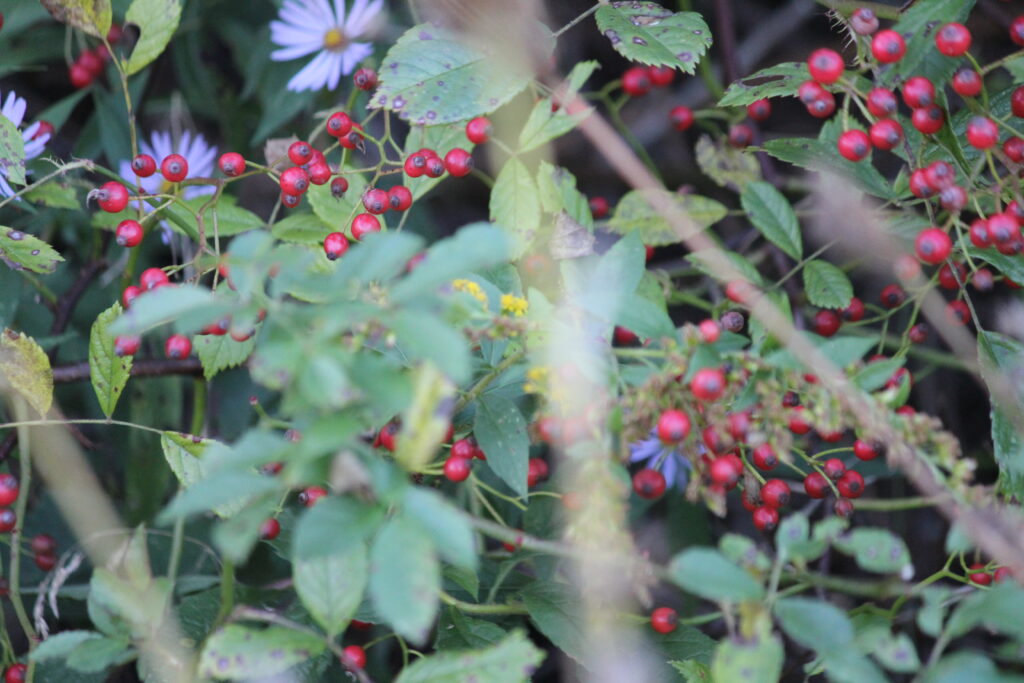 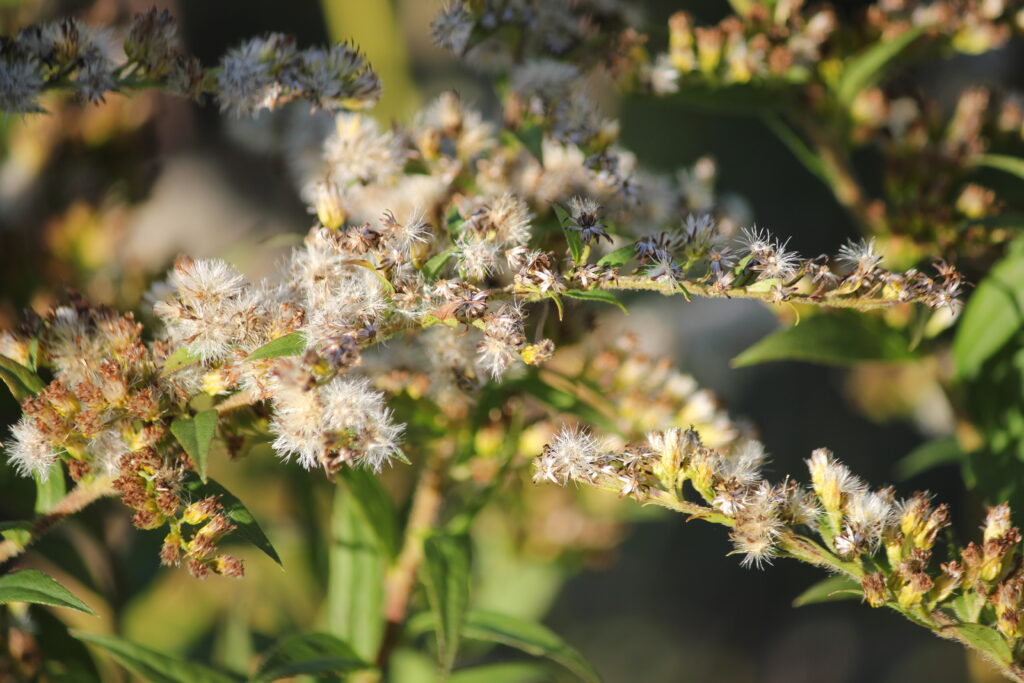 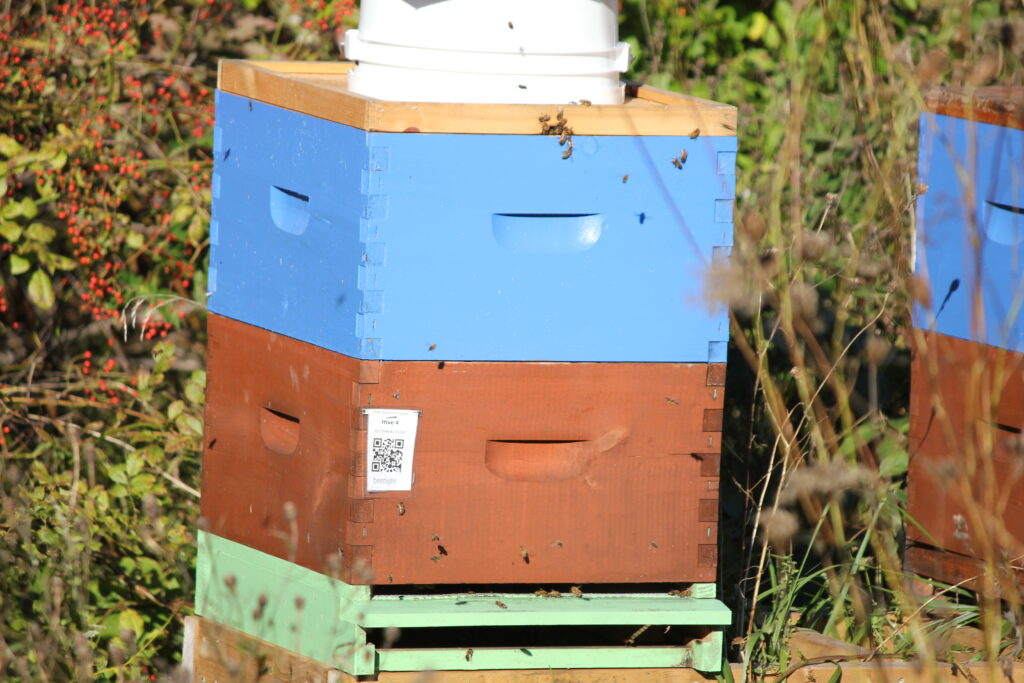 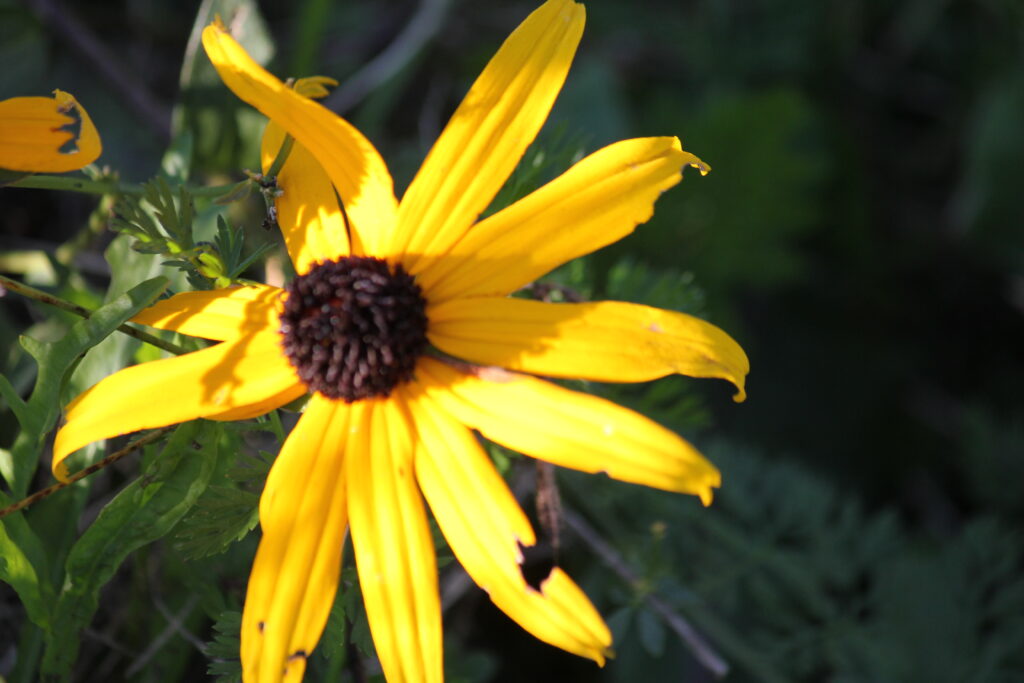 This black-eyed Susan is new, a late summer arrival 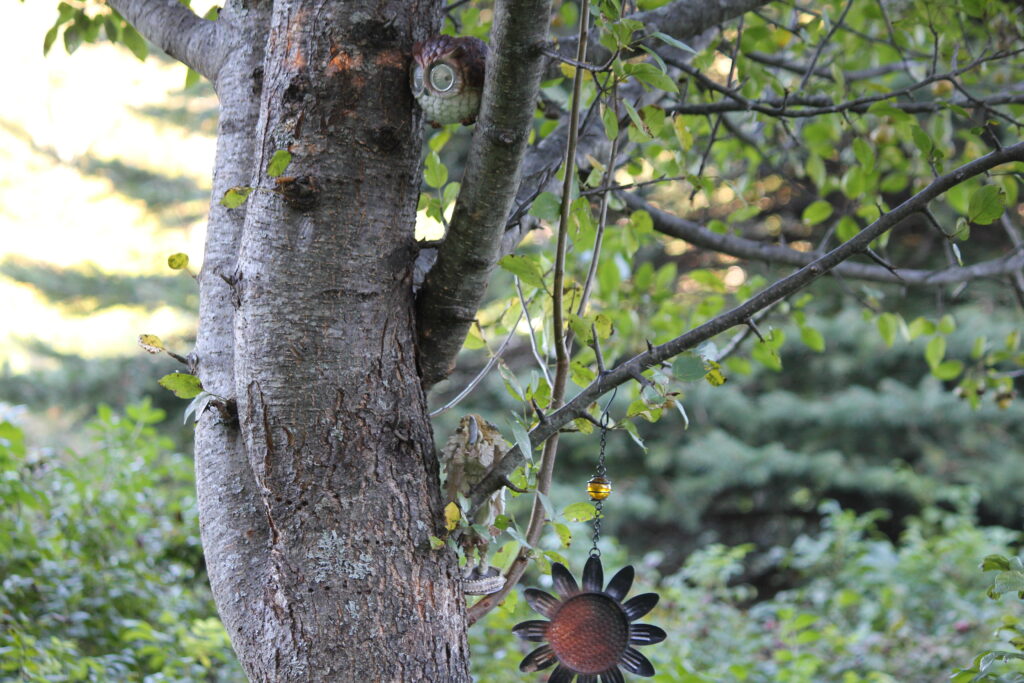 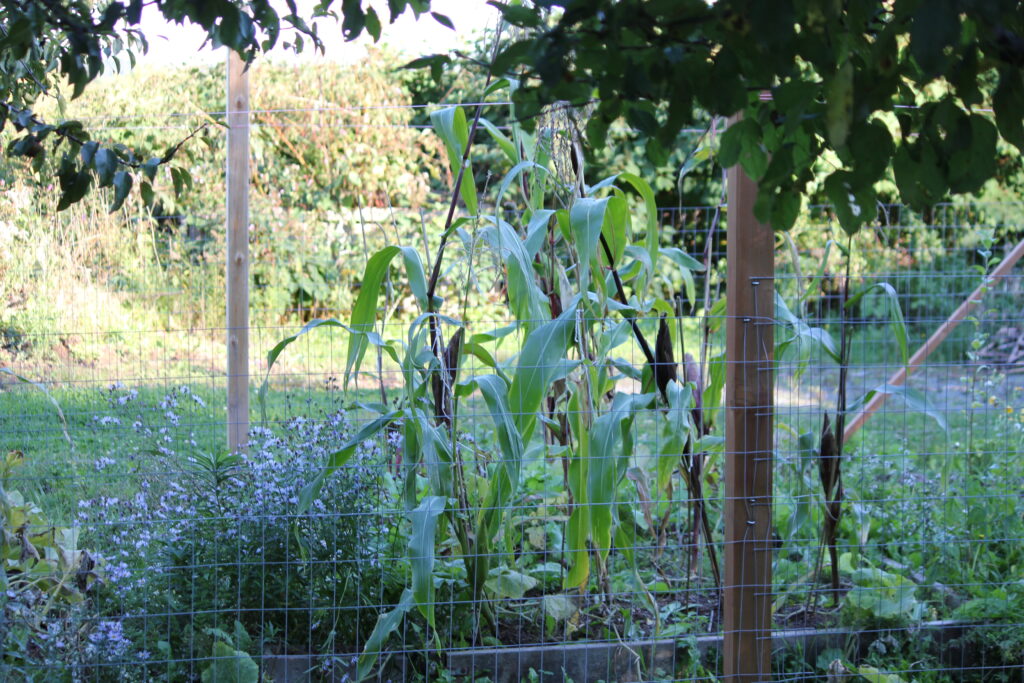 Corn is about all that’s left, plus a couple more squash 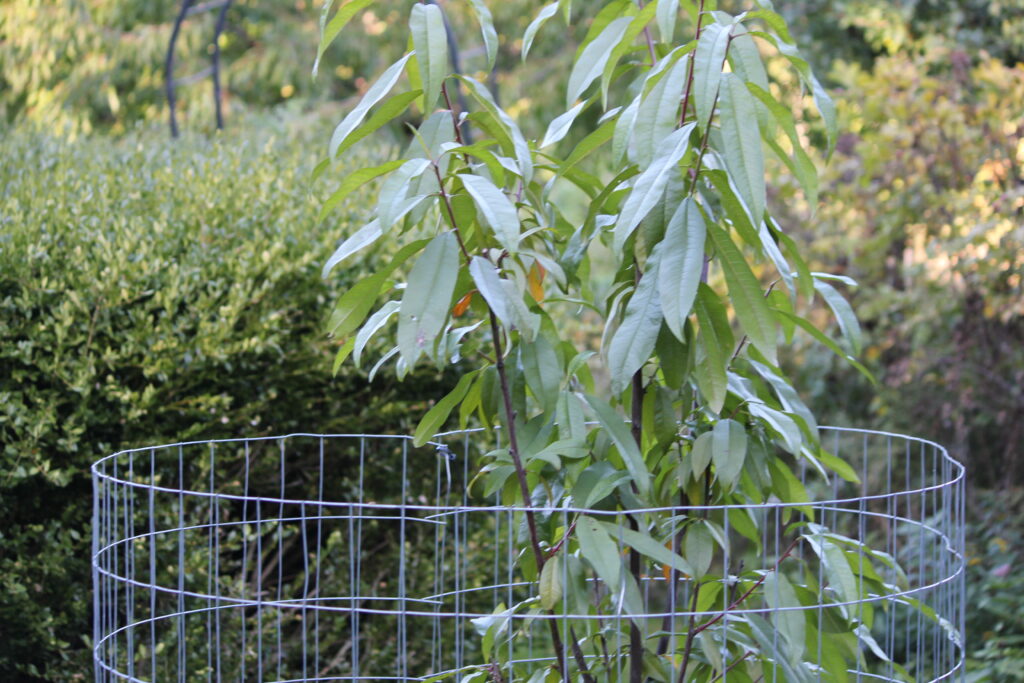 The zone 4 peach tree was tiny in the spring and has been doing really well! 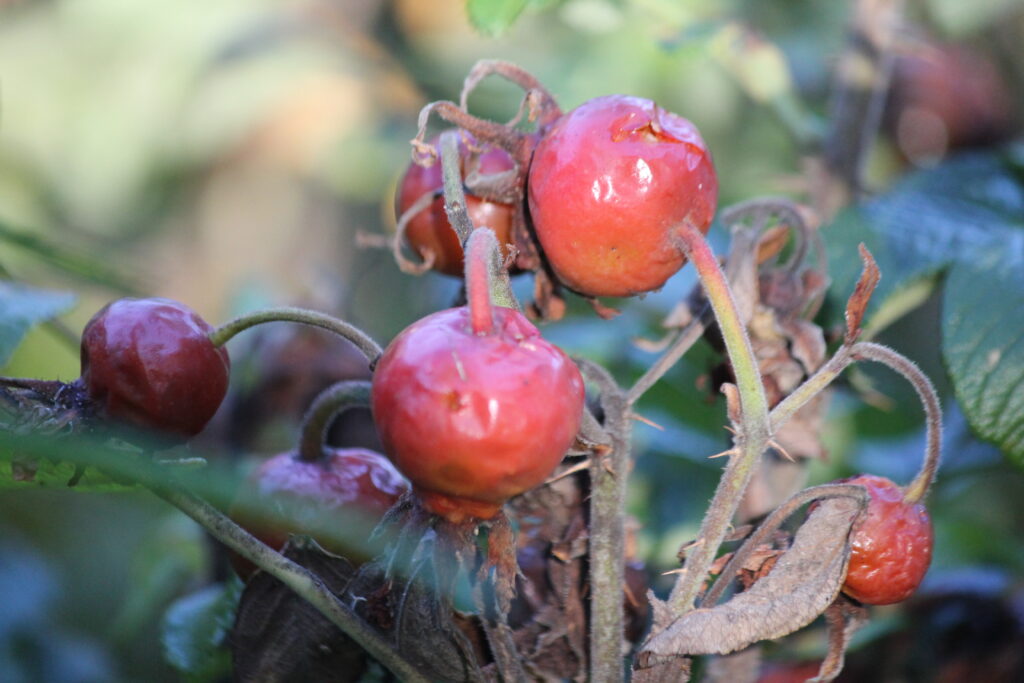