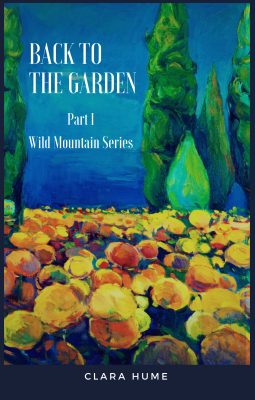 Actually, it’s not quite back to the garden yet. It’s too early to even order soil yet. I’ve done some mint and jasmine shopping lately but haven’t found what I wanted and will probably wait until more plants are at the local nursery around Mother’s Day weekend. When I say “back to the garden,” I mean back to our own yard rather than Nova Scotia’s, as my last two posts have focused on.

But I’m also reminded of my own novel Back to the Garden, which was inspired by Joni Mitchell’s song of the same name. In the novel, which you can read more about here, a small community residing on an Idaho mountain does have gardens–and apple trees! I would not have thought as I was writing the story so long ago that eventually we would buy our own house in Nova Scotia and have gardens as well as fruit trees. I have to say that it’s a pleasure living here, even though the start of it was strange.

When I look back at that time now, it feels both exciting and scary. The day before I flew out of the Vancouver airport, Covid-19 was announced as a pandemic. In the meantime, my husband stayed back at the Vancouver house for a month before coming out to Nova Scotia. We sold almost everything and brought so little with us. A family member was going through a difficult time and I told her I’d come to Chicago for two days before venturing onto Halifax, just for emotional support. These plans were all set in stone, including the house-buying, before Covid was even known about. All told, I was at five airports during that journey: Richmond (Vancouver), Toronto, Chicago O’Hare, Montreal, and then finally Halifax. Back then, nobody had masks. The airports had all sold out of hand sanitizer. I washed my hands a lot and stayed six feet away from people as much as possible. I got here and stayed at an airport hotel for two nights. Then they made the announcement that anyone flying would have to isolate, so I came straight to the house we were buying, and I got here two days early as well. Fortunately, the realtor, lawyer, and previous owner let me move in early and let us remotely sign and pay for the final things. It was still mid-winter, winds rose and fell around the house, and the various awnings would heave and ho and make all kinds of funny noises, even rolled up. There were so many things to worry about: Morgan also had to come out soon, how would we get our cats here, and so on. I had crappy cell service, no internet outside of data, and no furniture. It all worked out in the end, obviously.

About a month after I got here, a mass murderer was on the loose, so we locked our doors, closed the curtains, and turned off my lights. As if the Covid scare wasn’t enough. I was nervous about it, but kept updated by neighbors. You can read more about the Gabriel Wortman shootings here. He was driving around in an old police car and was killing both people he knew and doing some random shootings.

This doesn’t have much to do with my backyard wildlife, but in a way it does. Back then, even in winter, the solitude of the yard kept me sane. I would go out often, walking through the snow and admiring the spruce and pine trees as well as dreaming of what was to come soon, with all the trees and vegetables we planned to plant in the meadow. I envisioned picking apples (we have apple and pear trees and also planted cherry, paw paw, peach, plum, blueberry, strawberry, and other trees/bushes/patches). I thought of Back to the Garden I had written, which takes place in the future, and speculates on how climate change might affect people in the future. I knew for sure that climate changes are already terrible, with increased wildfires, floods, sea rise, melting perma-ice, etc. What I came away with while writing was that I looked at climate change as a human condition and a wildlife one. I actually looked back further than my upbringing, to remembering my mamaw and papaw on my mom’s side, and how they lived on a holler on a mountain. What kept coming back to me was that hardship wouldn’t be possible without people bonding together to care for one another and work to fight the hardships. I don’t see how that changes with any newer crisis now or in the future. So that was my focus in the story. And, if you liked Back to the Garden, which was part 1 of the Wild Mountain series, part 2, The Stolen Child, is coming on November 18 this year!

But there’s always the fact that wilderness is a necessity. Didn’t John Muir say that? Well, our back yard isn’t exactly wilderness, but it’s close enough for a totally accessible place of solitude and renewal. Once you’re in the back meadow, especially in the summer when the trees and other foliage block out our neighborhood, it is a sanctuary. Behind our property is a forest and a lake. Above, on a clear night, the stars are amazing since we live in a quiet place on the edge of a town and there’s very little light.

I’m sure I’ll have more to say about our meadow soon, as spring comes slowly here and we can’t even plant until the first of June. My mother-in-law visits in early May, and her gift to us when we got the house was a new awning, since the old one broke. It finally got installed today, so it’ll be nice to sit and relax on the back balcony and watch the jungle out back: the deer, bees and other insects, and the birds that are so loud as to be cacophonous and beautiful.