There’s a few turkeys in Canada these days who think it’s cool to, having been co-opted by what appears to be accelerationist loons both politically and monetarily, blare loud horns demonstrating that their anti-science protests (anti-vaccination mandates) are a reason to halt other Canadians’ actual freedoms to wear masks, have a quiet nights’ sleep, not be bullied, not be subject to racial slurs, not be able to enter their homes or businesses or even cross borders. Canada’s police and leader action to do much about this trucker movement has been embarrassing. These occupying turkeys and loons are in the minority, according to polls and to such obvious other statistics showing that the majority of Canadians elected governments who would what enforce vaccination mandates; the majority of Canadians are vaccinated, and even the Canadian Trucking Alliance does not support and strongly disapproves of any protests on public roadways, highways, and bridges, and the majority of the alliance’s truckers are vaccinated. Anyway, that’s what’s going on around my larger back “yard”, but my apologies to actual turkeys and loons everywhere. I realize you don’t belong with such a low order of species that includes some of the human race.

So let’s get to what else is going on in the natural world. Look, I’m not sitting here clutching pearls or wringing hands. I don’t even own any pearls and don’t care to. It’s the way I was brought up, though, that we have to be cognizant of worldly events. We don’t have to dwell on them or doom-scroll the news or any of that. The way I grew up, we watched the news, took note of scientific and actual changes in the world, and went forward living our lives with that broader knowledge informing us; better to be that way than spreading rumors that have no basis in reality or just blindly ignoring reality altogether. It never occurred to us to depend on optics, lies, and hurting others as a way to live. I realize that’s been around forever, but I’m happy to remember the way I was brought up and to continue to live that way.

So, about that avian flu.

I started thinking about it recently because one of my coworkers is getting some chickens, and it’s something we’ve thought about doing. I’m a vegetarian, but I love eggs, so wouldn’t mind having a couple egg-layers. There’s some downsides to it: chickens can attract rats, their noise might bother neighbors, and it’s a lot of messy work, according to my husband who grew up on a ranch in the mountains of British Columbia. And, just watching our meadow, it’s the source of many birds. Even during an ice storm last weekend, our trees were alive with numerous crows, bluejays, robins, mourning doves, and so on. It’s natural for us to go into new ideas with as much education as we can and to enjoy watching the nature in our meadow. One of our apple trees still has apples on it, though they are far past their edible (for humans) stage. I noted several robins pecking through the ice layering the apples just to get a bite. And then, just Sunday morning, we noticed a few pheasants behind one of the rose bushes, near a spruce tree. Now, seeing birds doesn’t automatically set off the avian flu antennae, but recent news about some new outbreaks around the world caught my attention, since Nova Scotia is one of those places.

Here’s some facts about avian flu:

Again, in a weirder and weirder world, it helps to just be aware of what’s real and what isn’t and let that define how we live, where our directions lie, and how we cope. Even whom or what we respect. 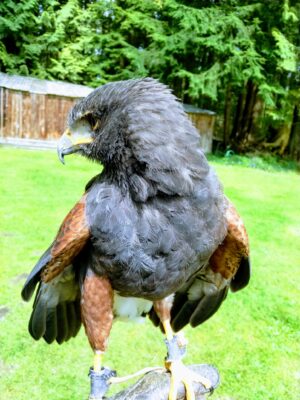 I guess, since I was a kid, I’ve gravitated to learning more about the natural world than I do trying to understand human psychology. The latter is often confusing, but interesting at times. As we are still in a winter freeze (although yesterday got up to 9 degrees and sunny!) what’s coming around the bend is, despite all the violence in the world, including a possible Russian invasion on the Ukraine, there’s other things to bear witness to, and that is springtime. It’s on its way. I have never been so excited for it, but know that we could have three more months of snow, wind, and cold. Still, throughout that time there will be a slow warming, the evidence of new life cracking through the soil and the cracks of the sidewalks. The other night I was talking with Mom and saw a strange animal trotting through the yard. I thought it was a cat, but it was not a cat. Turned out to be a porcupine. These things fascinate me. In a world without trees, rivers, mountains,  insects, and other wildlife, including all kinds of birds, I would be absolutely lost.

Note that the featured post’s image is of a Harris’s Hawk that I got to work with a few years ago back in the Vancouver area.