Today’s post looks at local backyard wildlife and expands out to the province, particularly Cape Breton. It’s that time of year when the chill of autumn bites the air, just teasing after summer heat waves and ongoing post-tropical storms from hurricanes, such as Henri and Ida. We have visitors from the interior of BC, our old stomping grounds, who are happy to escape the unprecedented droughts and wildfires resembling something out of Dante’s Inferno. They’ve had 50C temps and nearly had to evacuate more than once.

This is the first time we’ve had visitors who have not primarily just come for an outdoor bonfire. My mother-in-law and a family friend, who we went camping with two summers ago at Salt Spring Island, are here for three weeks.

It’s been great introducing them to our local friends. We’ve had bonfires, star-gazing, and the tasting of good whiskey and wine. It’s the first thing resembling a vacation we’ve had since before Covid came along. 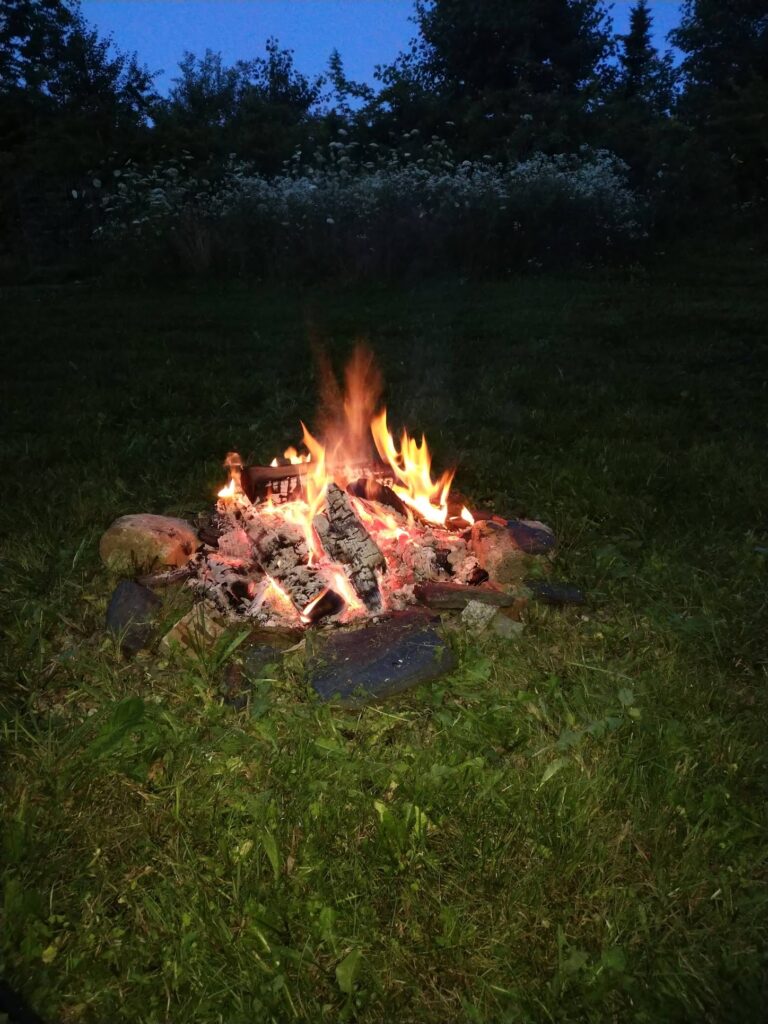 Bonfire on a starry night 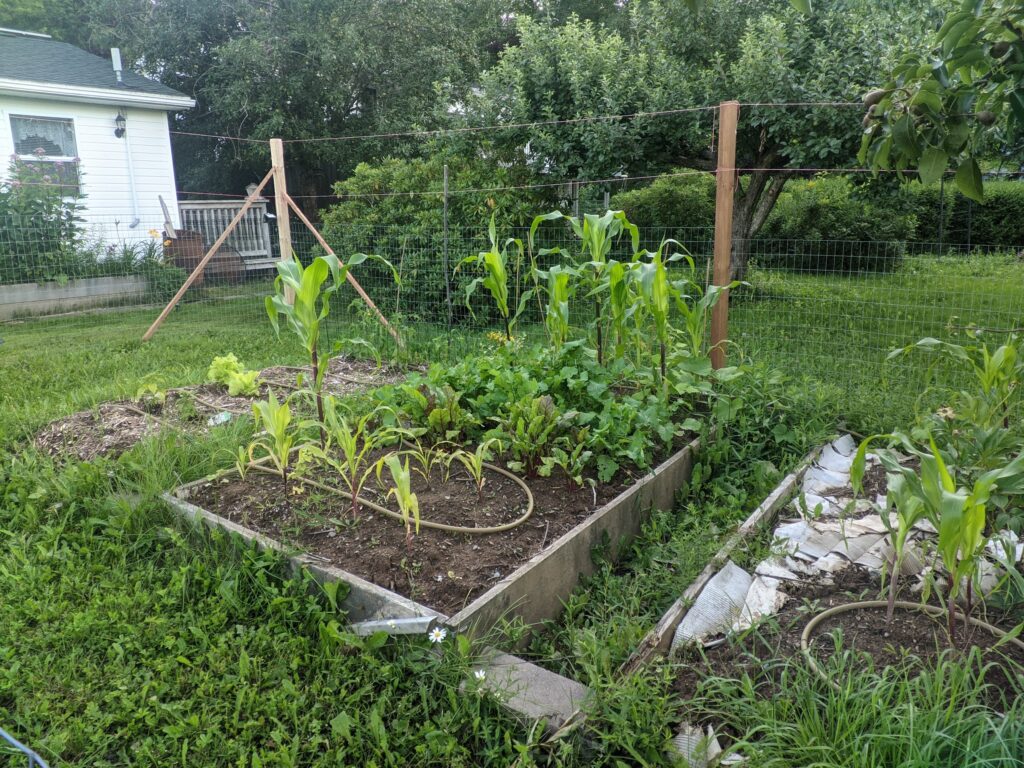 The garden in August. Since then, the corn husks have turned brown and I’ve had to tie the corn up to bamboo posts with twine after the corn has blown over twice in post-hurricane storms.

We’ve gotten a lot of turnips (including many greens), leaf lettuce, and onions so far. Some tomatoes are about to ripen, and the corn is nearly done, but we’ll be using it for cornmeal and need to let it dry on the stalk. The beets are almost done, and we’re curious about whether the squash will be ready or not. Beans are just now coming out since we planted so late.

We traveled with our visitors this past week–the first somewhat lengthy travel we’ve done since Covid hit–up to Cape Breton, the northern part of Nova Scotia, and both drove and hiked places around the Cabot Trail, hitting up a distillery, Glenora, on the way home. The extreme-ness of the weather has captivated us. During the past week we’ve dealt with heat and humidity, a plethora of mosquitoes around Bras d’Or Lake–where we stayed at a cabin for a couple nights and where we saw deer, porcupines, and a fox–to incoming post-hurricane-Ida winds and rain as we drove back home a couple nights ago. I have to say that this time of year in Cape Breton is beautiful. I wasn’t quite ready to let go of summer, and we certainly experienced it, including a warm 7K hike along the Skyline Trail in the Cape Breton Highlands. Many apple and rowan trees spiked the still green foliage with bright red and orange fruits. It was so cool also to see the Gaelic part of our province and attend a cèilidh, with the superbly talented duo of Kevin Evans and Brian Doherty as well as fiddle queen Dara MacDonald, keyboardist Adam Young, and multi-talented musician and dancer David Rankin. We also visited a tartan store where I found Collins clan (my family) tartans.

The distillery is highly recommended, especially after a long day of hiking and stopping by to photograph many routes along Cabot Trail. It’s North America’s oldest single malt whiskey distillery and reflects the history of Scottish immigrants landing on Cape Breton’s shore in the early 1800s. The Breton Highlands resembles the Scottish Highlands in its rugged cliff-against-sea beauty, along with the striking green landscape; in this area of northern Nova Scotia, you’ll find many signs everywhere written in Gaelic as well as Mi’kmaw (local First Nations) and some in French. As far as whiskey goes, I will forever be in love with true Kentucky Bourbon, which also has its distilling history by the late Scot-Irish, my ancestors. Maybe whiskey preference is in my DNA? 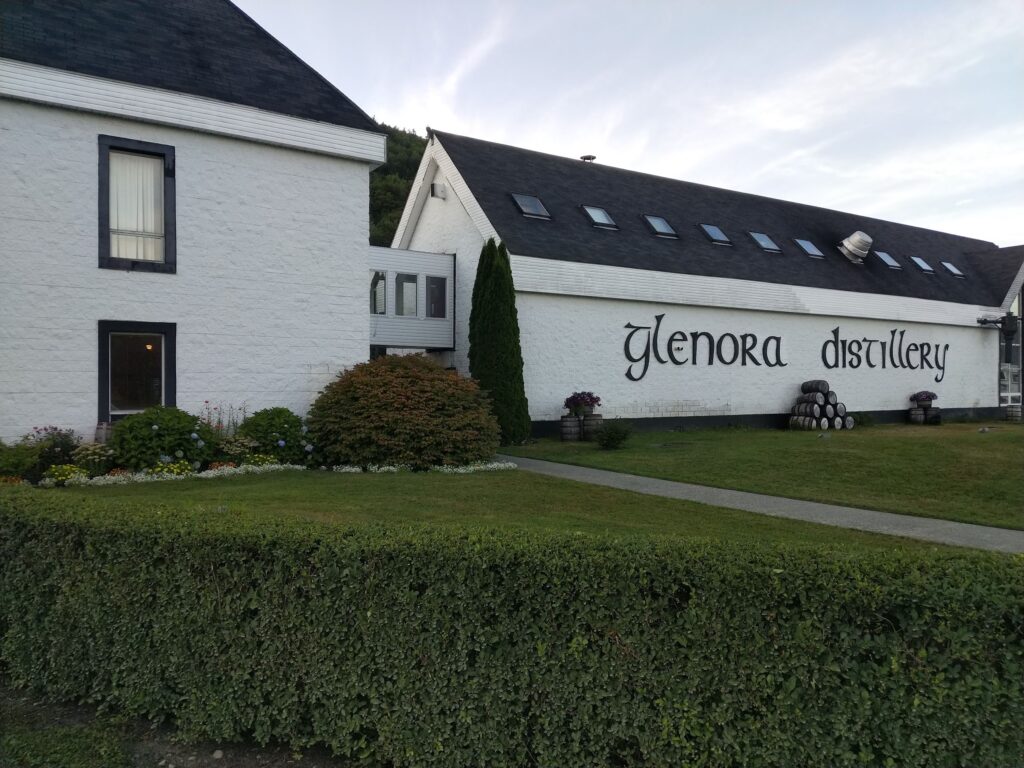 Glenora Distillery, where we had a wonderful dinner and tasted a flight of whiskey 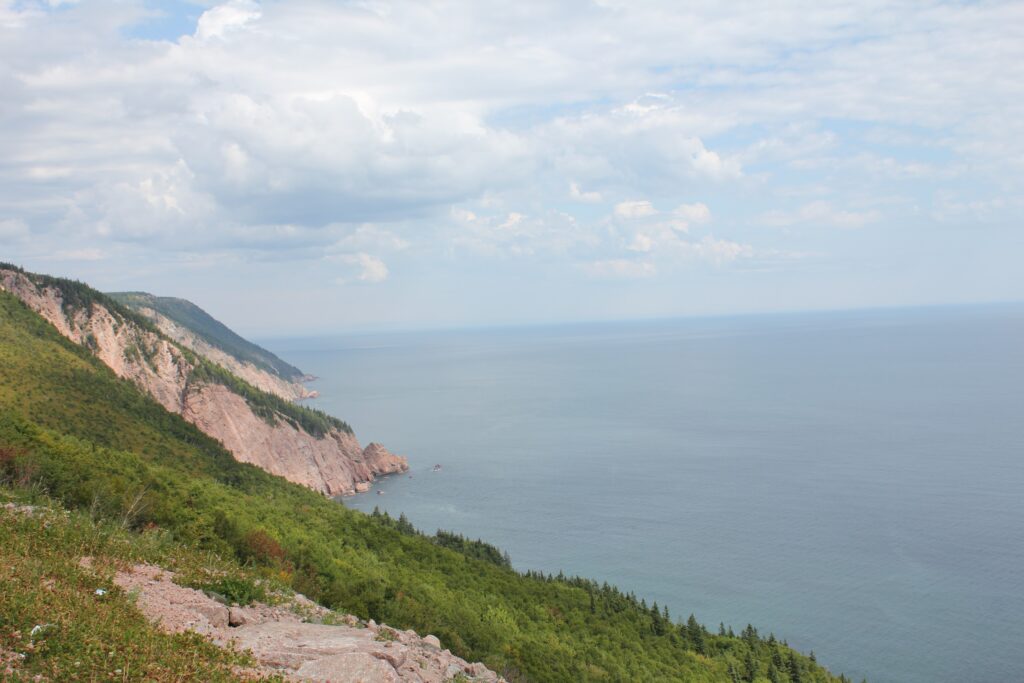 View along the Cabot Trail, overlooking the Atlantic Ocean. 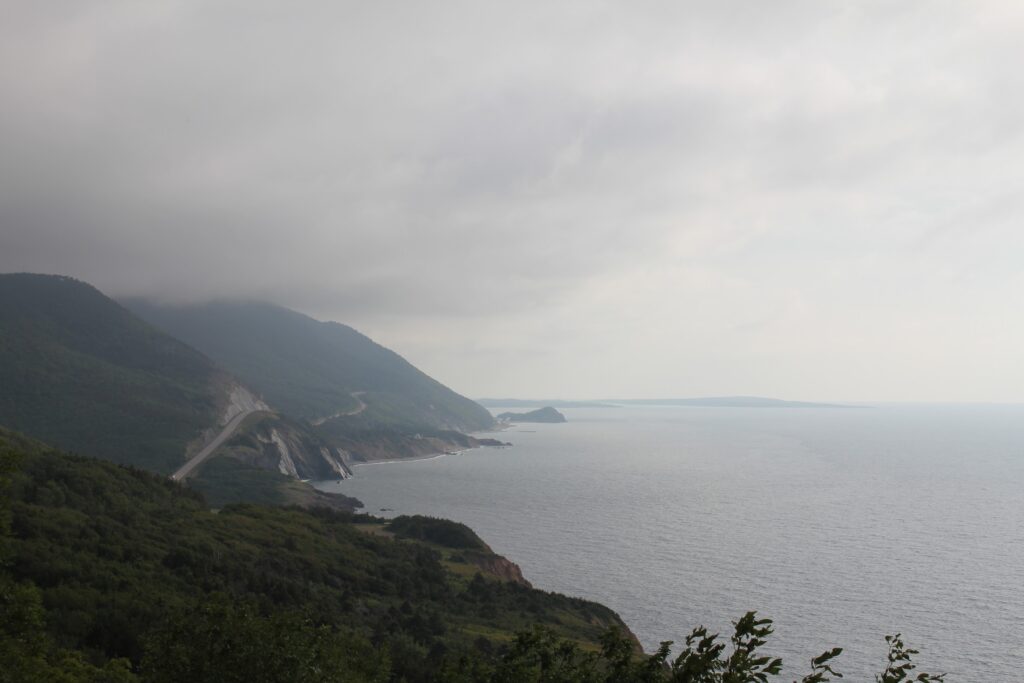 When we arrived home, we planned an early fall dinner for last night and invited a few friends over. For two days in a row we brewed apples from our trees to make apple cider, apple butter, and mulled wine. The house smelled awesome with apples, cinnamon, cloves, nutmeg, and oranges as well as the other scents of a native meal we served, including a maple-brined turkey. We also had our first woodstove fire of the season after having gone from heatwaves, rain events, high humidity, and hurricane winds, to a cool spell. 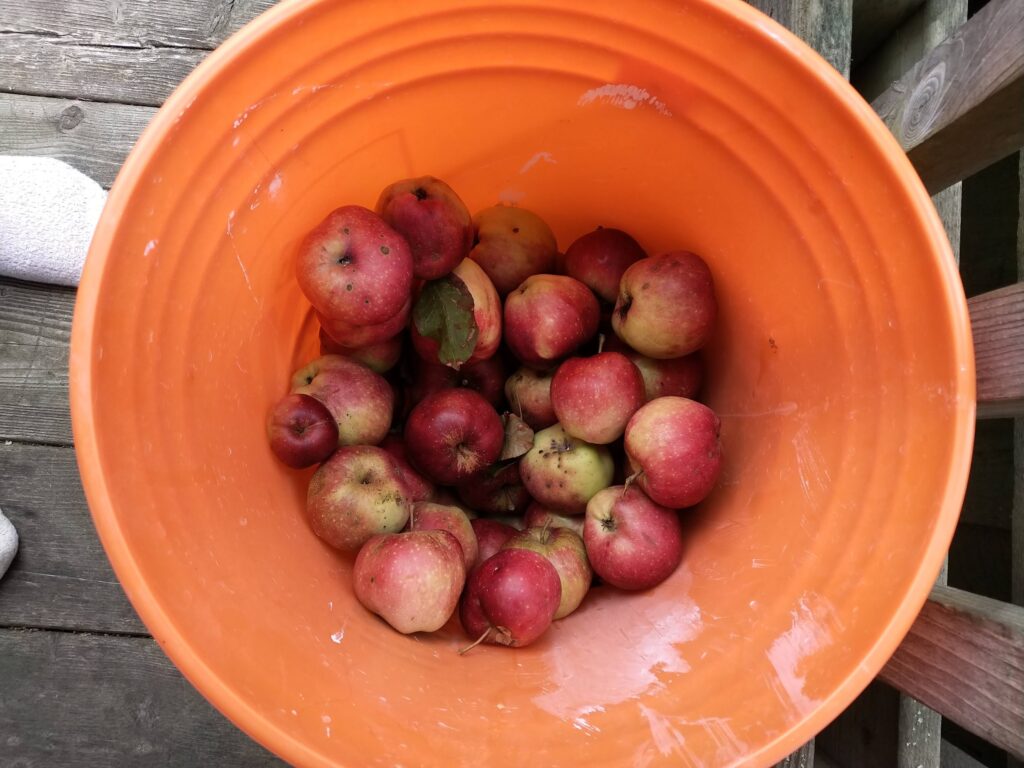 Bucket of just a few apples we have picked from a tree in our yard. 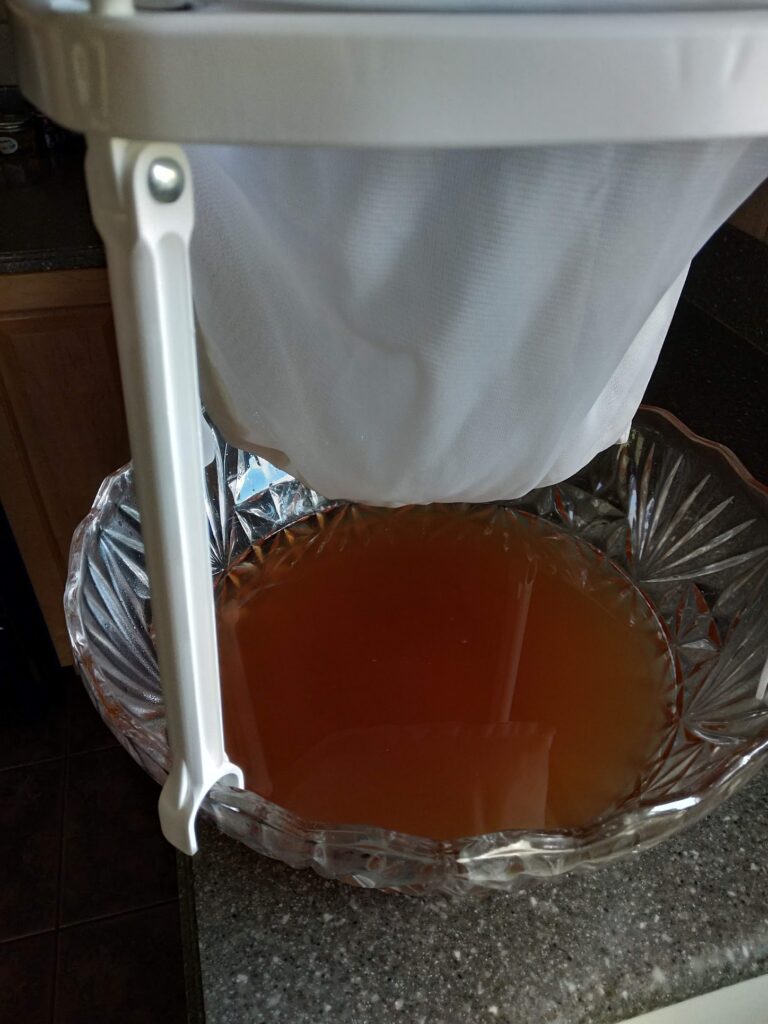 Filtering the cider pulp into a punch bowl 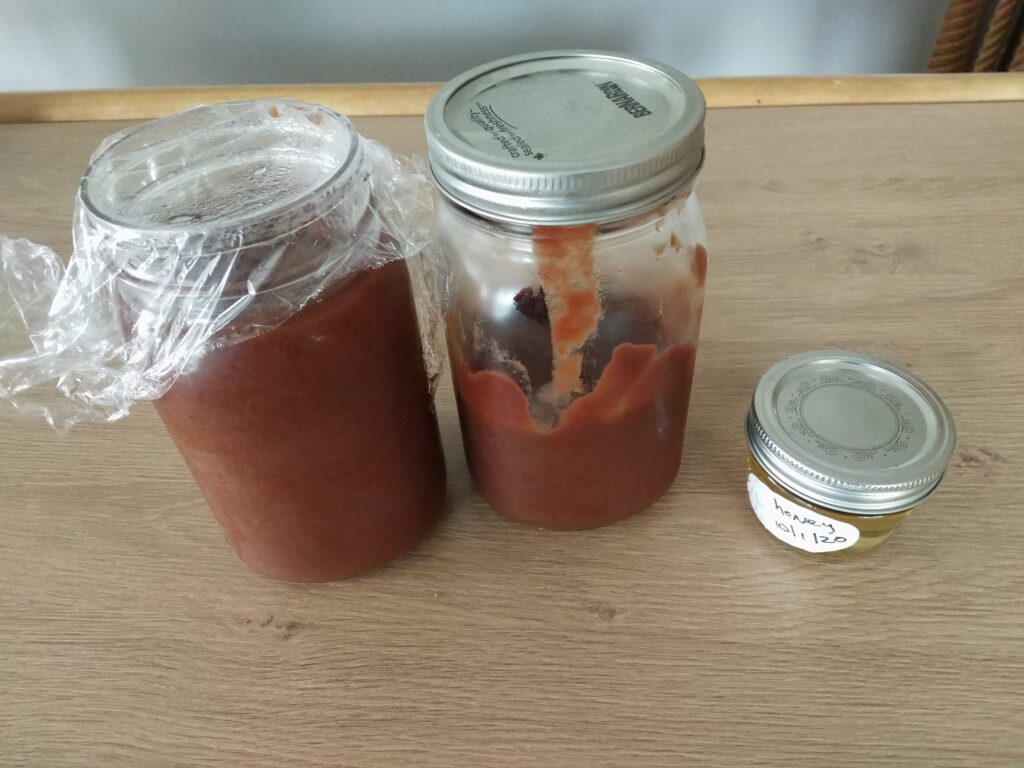 Just some of the apple butter we made over the last few days, along with a little jar of honey from last year.

One of our apple trees 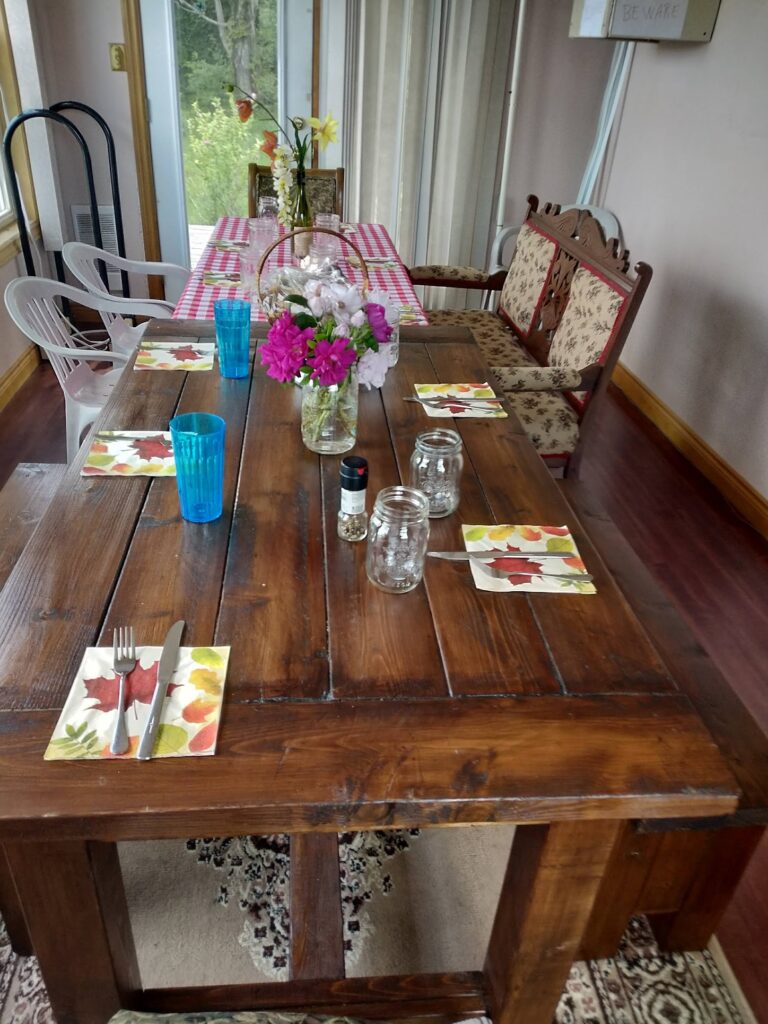 The meadow is showing signs of late summer, though we still have some roses, noted in the photo of our tables above. Queen Anne’s lace, goldenrod, trillium, sunflower, purple aster, and many more wildflowers still brighten up the meadow, though overall it is trending to brown and dull green. We also noticed a few deciduous trees turning as we traveled to Cape Breton and back.

A few late roses are in bloom, but the red of many ripening rose hips colors the yard. Also, we still had about a cord of wood from last year, but below is a woodpile we built with two new cords of wood for this coming fall and winter. 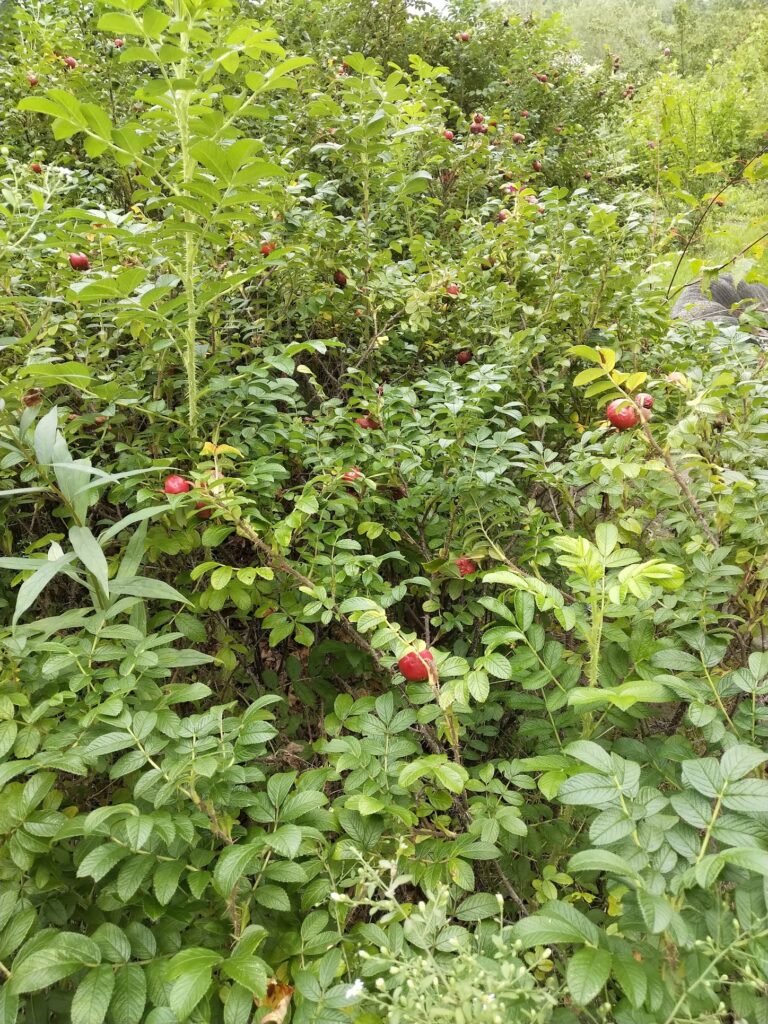 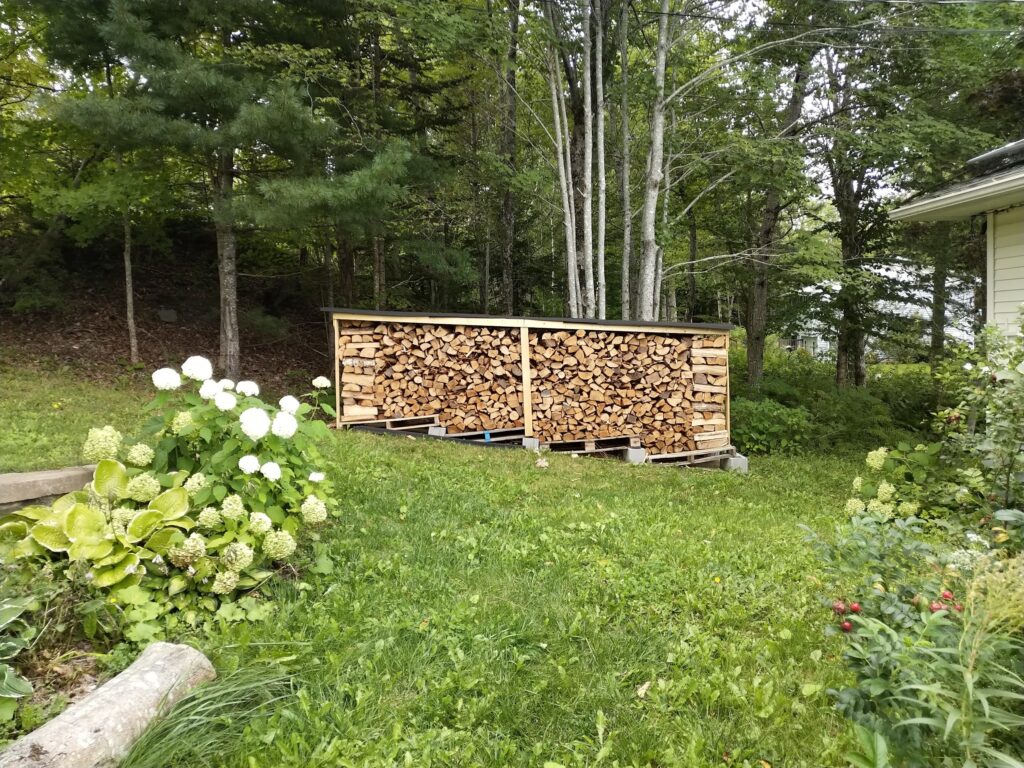 I am once again excited for autumn, though not quite ready for summer to end. The changing of seasons is a cycle we live by now.