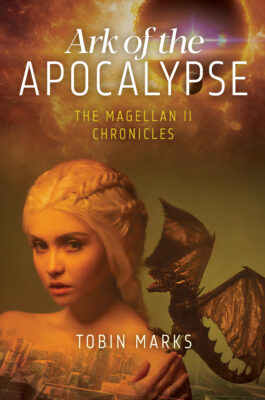 Tobin Marks’ Ark of the Apocalypse is, in part, a thrilling, page-turning journey into a fictionalized history of our world, with a look-back at some of our major scientific and engineering marvels as well as the downfalls of conquest, subjugation, and resource extraction. The other part of the story involves a sci-fi mystery navigating into our future, once humanity’s actions have ruined the planet. Climate catastrophe and the ecological ruin of planet Earth is a big theme that runs throughout, one that makes the reader think about what our species is not only experiencing now but the path we’re on if we don’t start taking more care.

While the beginnings of the story deal with various personalities involved with  significant discoveries, including that of a secret object as well as the familial inheritance of that object, part-way in we see that Earth may not survive. The next step is the building of a spaceship capable of traveling to another planet with life. Colonization plays a big role in how the world began and how a new world will be built. It leaves the reader questioning: is there any other way? Fortunately, along the way, amidst the story of players who Marks does a spectacular job at making us hate, are an equal number of hopeful characters who love their families deeply and want to do the right things, for today and the future. Still, there’s a sense of a certain hopelessness that is true to reality: nothing lasts forever. It’s what we do while we’re here that counts.

The structure of the novel is succinct, with short chapters that pack a punch. It is not difficult to get through this novel, through the realism of our livelihood and extinction is hard to grasp. Regardless, Marks does a stellar job at presenting such themes while telling a critical and thought-provoking story. Each chapter unfolds a new aspect of the story, leaving the reader with many surprises along the way. The evolution of the novel is intelligent and visual; I could see this story as an epic movie.

Among modern literary analysts who study ecological oriented fiction, a popular saying is: There is no planet B, meaning that we should take care of our planet and each other now. Not later. If we cannot take care of our world, who says we should go to another? Marks seems to acknowledge this principle in his story, but he creates such a spectacular new planet that it’s easy to fall in love with that facet of the novel. I’d highly recommend Ark of the Apocalypse for science fiction and fantasy lovers—as well as to those who care about where we’re headed in our climate-changing world.