Today’s insight is a departure from my usual focus on written eco-fiction as I enter into the gaming world, specifically that of World of Warcraft’s (WoW’s) Shadowlands and one of its zones, Ardenweald. Shadowlands is the newest expansion of what some of us classic folks refer to, sometimes derogatorily, as retail. For those of us “elders,” who began playing World of Warcraft at its start, back in 2004 or so in the original beta, we were delighted when the company brought back the original version of the game–which is what I’ve been playing since it launched last summer. Classic offered harder and more time-consuming gameplay as far as leveling, not pulling too many mobs at once, and trying to manage forty people in raids. Throughout the years, and its many expansions, the gaming style went toward more micro-transactions, quicker dungeons and raids, and more gimmicky–and tougher with mythic raids–encounters. The game soaked up internet and pop culture as it advanced, and Blizzard (the original company) joined Activision, a larger gaming conglomerate, which, to many of us, destroyed the essence of what was once a high-fantasy, immersive world, which was Tolkien-inspired. That inspiration in WoW includes also the idea that excessive industry vs. nature corrupts the land and from that is born the dichotomy of good (nature) vs. evil (industry). Newer races have been added throughout the years, and the large story and world grew smaller, in some ways, due to flying mounts, city teleports, and quest instancing. But, for the most part, the story and world are still beautiful and steeped in wildly imaginative lore and fantasy. The adding of more races and classes provided some diversity, though not enough.

A few people in my current classic guild jokingly call me a druid in real life, because they know about the work I do. Druids in WoW are not from an old religious sect but a class that’s highly tuned to nature. Some of our first quests involve learning bear form, cat form, and aquatic form. In a druid’s early adventures, we also must cure diseased fawns in order to learn how to abolish poisons. In my last 15 years of playing, the druid has been my favorite class, and I play one in classic too. Once in a blue moon I would log into retail and slowly level my alliance druid there. When Shadowlands was announced, I wasn’t really interested. I didn’t like the direction retail was going. But I changed my mind when our classic team decided to explore our final classic raid, coming out this week, Naxxramas. It’s our last content in the original classic version of the game, though it was reworked in retail eventually to be slightly different and in a new zone. Our guild decided to get on horde retail characters last night to just walk around the newer version of Naxx and discuss strategy. So I made a new horde character and began playing through retail. In previous expansions, my interest was held until the raiding grind and I stopped playing–which is probably what will happen this time too. My horde character is a rather ugly troll druid, but I feel an affinity to her for whatever reason. Maybe it’s that the name Eire was still available, or that the game has improved graphics somewhat over the years, including character appearances and diversity. I don’t know, you decide! 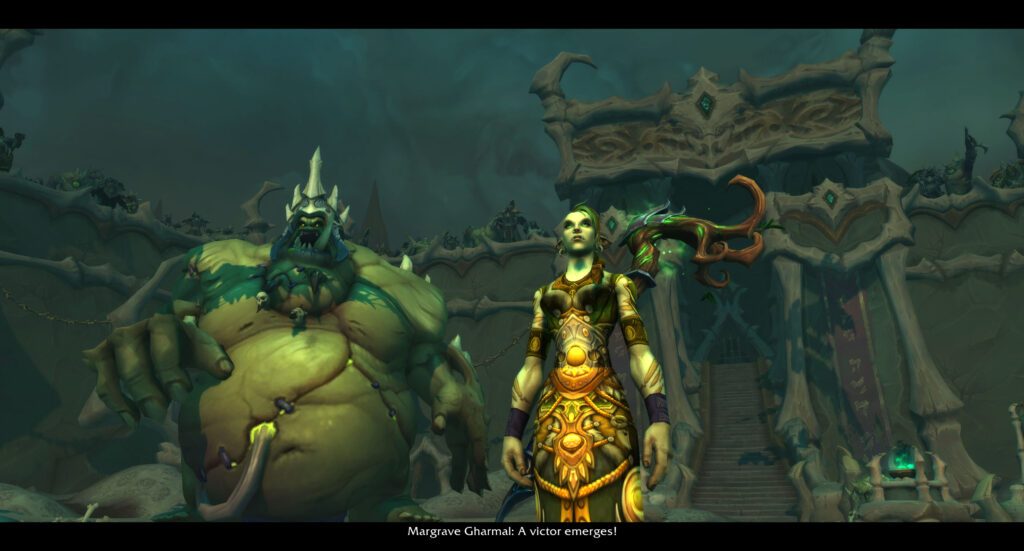 My druid Eire on horde side, retail version. Me in Maldraxxus.

The new expansion has four main zones: Bastion, Maldraxxus, Ardenweald, and Revendreth. New players start in the city of Oribos and progress out to the four zones mentioned earlier, starting at level 50 in Bastion and continuing along the way. The Maldraxxus zone introduces the player to The Maw, which might also be considered its own zone, but it’s incorporated into the other zones’ quests. I’m currently on the third zone, Ardenweald, and have enjoyed the surroundings, quests, and lore immensely, although it’s a little too cutesy in some places. I’ve been quite drawn in to Shadowlands. I came across some weird bugs and portals that would crash the game pretty regularly, but overall am enjoying it. It came out on November 23, but I didn’t start playing it until a couple days after American Thanksgiving, when I had a little downtime. In the second zone, I was laughing out loud and figuring out the strategy to a quest called Archival Protection, which is one in a chain of quests taking you around Maldraxxus. Near the end of the questline, you end up in the mage tower of the Archivist, who has an amazing library of books on several levels. It’s one of those round towers that’s pretty thin, so you have to find books on the shelves, tables, or floor and collect a set of them. I was laughing so much because books are flying across the room, and though they don’t damage you, they do knock you back, so you have to avoid them and make your way up the spiraling staircase to the top of the tower, to more books. As you make your way up, you try to avoid some slime coming down the steps and also, later, some curtains of light. Once I was done with that quest, I was glued.

The third zone in Shadowlands is Ardenweald, the home of the Winter Queen and the Night Fae faction. It’s also where the fabled Wild Gods go after death, though their spirits are bound to the Emerald Dream. The Wild Gods are part of the lore of Azeroth, the world in which the game is set. In the earliest days, as the titan-forged gods began shaping the world, Keeper Freya–inspired by the Norse goddess Freja/Freyja, one of the Pantheon’s keepers–created the Emerald Dream, at which in the center stood a great tree and from there flowed water, flowers, and wilderness, which represented balance and healing. She also rescued and befriended animals such as the panther cub Ashamane and the bears Ursoc and Ursol. Eventually, she was defeated by Loken and enslaved by Yogg-Saron. She also reappears in the Ulduar raid–where, once defeated, she is freed of Yogg-Saron. Although we saw her, or her avatar, in earlier expansions’ zones, such as Un’Goro Crater, Sholazar Basin, and the Vale of Eternal Blossoms, the Wild Gods emerged from her likeness and entered into the game more predominantly in Hyjal, in the Cataclysm expansion, in which the world tree Nordrassil was so immensely large and beautiful. Although the Emerald Dream was referenced in the classic version of the game, and was also the name of a druid quest to obtain a book from Dire Maul, it came into an expanded experience in the Legion expansion, when a zone just for druids was born. You can read more here. While it may have been a back-up copy of Azeroth, I really like to envision it as a parallel dream universe.

Freya in Ulduar. She’s been corrupted by Yogg-Saron and must be freed. The corruption expanded to the normally tranquil world around her.

Ulduar is one of my favorite raids. Once you kill the keepers, they can help you to fight the pit boss Yogg-Saron. Below are the keepers once you’ve killed (freed) them. You can ask them to help you defeat Yogg-Saron.

The immensity of the world tree Nordrassil in Hyjal is hard to capture. here I am at a distance.

Back to Ardenweald. To this realm, the Wild Gods and other spirits of nature–including those who come close to them (like druids!)–can travel after death. Big dream trees draw in an essence of mortal souls called anima, which the Night Fae use to renew sleeping spirits and bring them back to life. According to Gamepedia, the Emerald Dream represents the spring and summer cycle of life and Ardenweald reflects the autumn and winter cycles. The zone not only has magnificent trees, faeries, and animal spirits, but it is full of magnificent sentient fungi, including Marasmius, who speaks like a crotchety, gossipy elderly gentleman.

The Night Fae Covenant is, I think, new to the lore of the game, though I could be wrong. It is one of four covenants that the player can join once they go through all the zones. Each zone represents a faction to choose. Because of their deep connection to nature, I’m sure I will choose the Night Fae covenant at the end. This choice comes through the Choosing Your Purpose quest, which I haven’t quite gotten to yet.

Defenders of nature who uphold the cycle of rebirth.

If the Emerald Dream mirrors the spring and summer of life, then the star-hued plane of Ardenweald reflects life in its twilight.

Those who pass on with a deep connection to nature are tended here by the mystic night fae, who retrieve anima from mortal souls and infuse it into slumbering spirits, rejuvenating their lives with the remnants of the old.

Ardenweald has suffered more keenly from soul-drought than any other realm in the Shadowlands. For the first time in endless ages, the night fae’s Winter Queen must choose which of the land’s formerly lush groves—and which souls—will be fed the last precious drops of anima… and which will fade away forever.[4]

The night fae tend to fallen nature spirits who slumber within the tranquil forest. Those with a deep bond to nature may join their cause, ensuring that the rejuvenated spirits can one day rejoin the eternal cycle.

Retail druids get a spell called Dreamwalk that teleports them to the Emerald Dreamway, a mysterious and gorgeous place.

I’ve always appreciated World of Warcraft’s lore, which, along with an immersive study and exploration of the world, is really why I play. In classic, I also play with a group of individuals who seem like a rare find among the multitude of bots, gold-farmers, players who offer their own micro-transactions in the game (I didn’t see this much in the original version, but it’s easy to avoid with a global ignore mod), or players who use general chat to dumbly talk politics, race, conspiracies, and everything else under the sun. It is surprising in this 15-year-old game that a multi-billion dollar company cannot stop bots and cheaters, cannot always enforce their terms of service, and has terrible customer service, with it taking days to fix things for paying customers. Without my own play-style–on my own on retail, not too concerned about raiding, and with a cool group of people in classic–I wouldn’t be in the game at all. Our guild is into helping each other and doing things together despite loot we get or don’t get. For instance, we’re into the final and hardest part of the classic experience, Naxxramus, despite the fact we’ve been raiding AQ40 since late summer and some of us have gotten maybe only one or two upgrades–and for all of us 9-12 healers, absolutely no weapons have dropped in the latest content. But I think we just like to explore the world, do things together, and experience the content of the game. In retail, I just want to explore the world, become a night fae, get to max level, and probably call it a day–maybe go back and do earlier dungeons in that exploration spirit.

In conclusion, in this time of Covid-19, where socializing in person is not possible for a while, and with winter coming on, I’m going to spend my free time in the game exploring forests, faes, animals, dreams, and lore. It’s like reading a story interactively, which I think is a good way to pass the time immersively. I am also starting to run again this week, which will hopefully combat the idleness of screen time–but the game is not an idle experience. Storytelling never is!