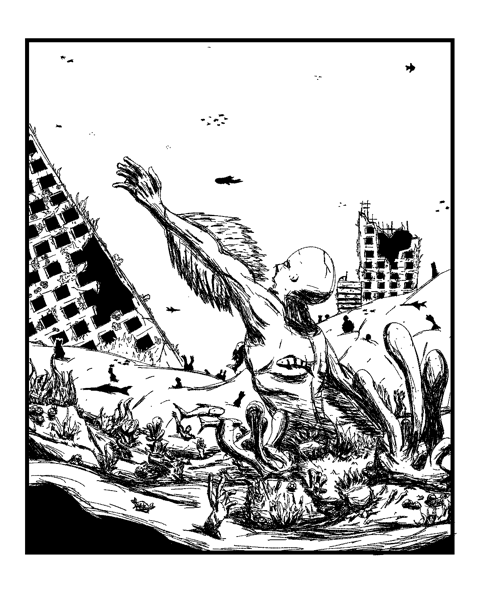 Ocypode’s lungs burned. He pressed against the leprous wall festooned with corals and barnacles, on the lower level of the submerged lighthouse, and refused to expose his hiding place. Aquarian adults avoided Lighthouse Point like the plague. They believed it to be haunted by the unquiet ghost of the last Human keeper whose own light had been extinguished by a tsunami two centuries ago. Still, the rugged underwater ridge fascinated Aquarian children. The promontory had been swallowed by Mother Ocean, the first phase in Her relentless conquest of the coastal town of Tillamook. Sunburst starfish covered the floor in flaring orange constellations. Scarlet blood-crabs scuttled between rusted metal shelving and the wreckage of the staircase that wound its spiral path above the waves. A mottled moray coiled and undulated between two steel stairs. The lighthouse ruins were a creepy place to hide.

That was precisely why Ocypode considered it a refuge. He feared it less than the scorn of his “normal” Aquarian kindred.

He huddled in a cleft between two crusty mounds of rubble beneath the staircase, waiting for the signal that his stubbornness had been rewarded. At last he heard it: a high-pitched whistle, the chitter of searchers admitting defeat. Relieved, he spurted from his hiding place and flailed his way outside, desperate to surface and refill his lungs. He should have known better. Two seekers — Cacopsis and Drombus — grabbed his arms as soon as he cleared the doorway, crushing his undersized fin-ridges against his sallow flesh. He cursed his affliction. Among all marine mammals, he and those like him looked far too “Human”…and that made them targets.

“Told you he was here,” croaked Drombus. “Why should he be afraid of a dirt-swimmer spook when he’s mostly dirt-swimmer himself?”

Cacopsis cackled. “He should be afraid now. If we held him here until he drowned, who would notice? Who would give a damn?”

Drombus and Cacopsis were of a kind: burly, thick-brained bullies who had followers but no friends. Fish schooled with their own. Nobody really liked them…but that didn’t make them less dangerous. Ocypode didn’t think they had the guts to kill him — not intentionally — but they were dense enough to do it by accident.

“Yeah,” said Drombus, tightening his grip. “And you’re an embarrassment. If we turned you into crab bait, we’d be doing him a favor.”

A new voice — powerful, strident — sliced through the thunder of waves crashing against the lighthouse tower above them. “And if we turned you and your crony into crab bait, we’d be doing the whole colony a favor.”

Rhincodon floated in the turquoise sea above them. He’d seen less than nine thousand tides, and still he was imposing, bigger than the older adolescents who held Ocypode in their iron grip. Beside him floated Auriga: slender, fragile-looking, but her jade eyes burned with disapproval. Both were members of Ocypode’s hide-and-seek team; leaders, in fact. Still, he wouldn’t have held out hope of normals coming to his rescue.

“You heard the call,” said Rhincodon. “Seeker time ran out. This round is over, and your lot lost. Let our teammate go.”

“He’s half a teammate at best,” said Cacopsis with a smirk. “Didn’t know you were so in love with mutant freaks.”

“He’s worth twice the two of you combined,” said Auriga, her voice musical despite the undertone of fury. “Can you do the math on that, or do you need to gather shells so you can count it out by hand?”

Drombus growled, released his grip on Ocypode, and lunged for Auriga. Rhincodon crashed into his side, pushing him into Cacopsis, then pinning the pair of them against the wall of the lighthouse, scraping their slick skin against the coral skeletons. Blood drizzled into the water as they squirmed. Rhincodon scowled. “You’ve injured yourselves. Better run home to your mommies before the smart-sharks sniff you out.”

Drombus and Cacopsis swam sullenly toward the heart of Tillamook Reef, leaving a trail of muttered curses in their wake. Rhincodon and Auriga escorted Ocypode to the surface for a much-needed refilling of the lungs. The three of them broke above sun-dappled waves, sucking in deep breaths as they bobbed in the shadow of the lighthouse. The upper floors of other ancient Human buildings formed an uneven breakwater to the east. Surf crashed against the curved lighthouse wall, spitting salty spray across their faces.

Ocypode had never, in his short, stressful, solitary life, been so grateful for the company of other members of his pod. “Thank you,” he said. “I don’t know what I would’ve done if you two hadn’t shown up.”

“Oh, you’d have outsmarted those mental minnows,” said Rhincodon. “Of course, a sea slug could do the same…but you’d do it faster, I’d wager.”

Ocypode smiled awkwardly. “If I was really smart, I would’ve hidden somewhere they couldn’t find me.”

“Even idiots get lucky,” said Auriga. “Someday, that pair will listen to you recount the history of our reef-city and hang on your every word. And so will we.”

She squeezed Ocypode’s arm before she and Rhincodon dove beneath the waves. Her smile, her touch sent electric tingles through him, jangling his nerves. He didn’t know either Auriga or Rhincodon well, but he saw no sign that they were repulsed by his deformities. With luck, he’d get to know them better as the tides rose and fell and they grew into adulthood.

Auriga was right, of course. An Atavism’s path led to the Archive cavern — to the sacred duty of preserving the legacy of the man whose rogue science brought Aquarius to life. A lorekeeper might never earn love, but he could earn respect.

Perhaps that would be enough.