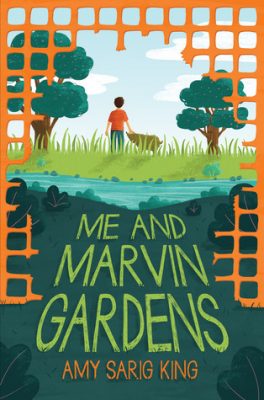 Everything around twelve-year-old Obe Devlin is changing. New subdivisions keep springing up behind his house on the acres of land that once belonged to the Devlin family. Obe’s former best friend, Tommy, has switched allegiances and now hangs out with kids who care more about owning the right sneakers than about exploring the woods. And all the construction workers and new residents throw trash into Obe’s creek, which feels like a personal insult.

The sixth grader uses his new Tommy-free alone time to clean up the creek, and while there, discovers an animal that he’s never seen before. In fact, he’s pretty sure that it’s an animal that no one has ever seen before, with characteristics of both dog and pig, but also with the slimy skin of an amphibian. Obe, an aspiring scientist, is intrigued by this new animal but also has an instinct to keep him secret – fearing that people might capture or harm the animal. As he gets to know the creature better, Obe names him Marvin Gardens after the street in the game Monopoly.

Marvin eats plastic, everything from grocery bags to the fencing used by the housing subdivision developers. Obe realizes this could be an amazing ecological development – Marvin could help solve the plastics crisis! But when Obe discovers that Marvin’s poop is toxic waste which eats sinkholes in the ground and melts sneakers, he knows that it’s only a matter of time before the neighborhood comes looking for Marvin. Obe turns to his new friend Annie, his sister Bernadette, and his science teacher to help find a way to keep Marvin safe.

Me and Marvin Gardens uses magical realism to dive deep into the complexity of modern life and its resultant ecological problems. The introduction of a plastic-eating animal seems like such a brilliant solution to the known problem of plastic pollution. However, the author uses this device to show the converse as well – that nothing is without consequences. Even a plastics-eating animal with have an impact on its environment, and even a creature that should be seen as a boon to humanity risks becoming vilified.

A.S. King skillfully shows the bond that Obe develops with Marvin in such a way as to avoid being too heavy-handed with her message or too preachy. Obe clearly cares about his land – the land that his ancestors have lived on for generations – and his love of place fuels his dedication to preserving it. While he is aware of the scale of the problems that the whole planet faces, apart from those literally in his own backyard, and while Obe is interested in studying science so that he can help solve problems, King keeps Obe focused on what is happening around Devlin Creek. His emotional investment in this place, and in Marvin, resonate throughout the book.

Interwoven throughout the book are other struggles that middle-schoolers face, like bullying, isolation, and changing relationships with friends and siblings. There’s also an important examination of consent as it impacts Obe’s friend Annie, who is forcibly kissed by Obe ex-friend Tommy. The characters wrestle with what is means to be true to themselves and what is means to be a friend to others. The portrayal of these issues adds layers of depth to the book, leading readers to explore much more than the environmental message.

With the use of the game of Monopoly as a framework, King also invites readers to think about land ownership, and whether or not developing the land improves its value. She uses Obe’s father – a cutthroat Monopoly player – to mimic the attitude of the investors who are developing the land surrounding Devlin Creek. From their perspective, what is valuable about the land is its potential to make money. The way Obe plays monopoly is exactly the opposite – he buys the properties and refuses to develop them. It’s no mistake that he names the newly discovered creature after his favorite property.

I truly enjoyed the thought-provoking layers of Me and Marvin Gardens. There is so much to be gleaned from this story, and it would be a perfect book for a classroom with each reading revealing another facet of this complexly interwoven tale. I give it 5 of 5 stars.