Note that due to the coronavirus and not being able to really travel the province as much as we’ve hoped, I’ve renamed this series Backyard Wildlife, with the idea that on occasion when we do get to travel around the province, we can still consider that our backyard!

I’m happy to introduce my new series about Nova Scotia wildlife. While this series is non-fiction, it will tie in with how authors explore our own back yards and surrounding wild places; these memories give rise to the fiction we write. As an author, I know that when I get close to nature I’m informed and changed by it and, in turn, it gives impulse to the places I write about in fiction. I’m not alone in this. Check out my author spotlights, where it’s obvious that most authors I talk with are heavily influenced by the physical landscapes around them, whether it’s a place they live now, grew up, or visited. These experiences with the wild find a way into our hearts and our stories.

One of my first great memories was traipsing like a wild child among forests, mountains, rivers, and the sea. I was born in Louisville, Kentucky, and remember the endless jaunts to Cherokee Park as well as all our treks up and down the mountains in eastern Kentucky’s Appalachia, where my mother’s family lived. Throughout my life, I have gravitated to the outdoors out of pure interest, curiosity, and enjoyment of the places I lived or visited–from Turkey Run and Shades state parks in central Indiana to the desert of Arizona to the shores and mountains of California’s west coast.  When I moved to British Columbia up in Canada, I began running trails all over the province and journeyed to Ireland, running in places Yeats wrote about in poetry.

For authors, it seems that being in nature cultivates love and respect for it, which leads to empathy for the loss of it and activism for the protection of it–which is what eco-fiction is all about. In my case, place-based experiences lend heavily to fiction, like I mentioned above. In Back to the Garden, my first novel (pen Clara Hume), I summoned up the mountain life I experienced with relatives in Appalachia. I’m also writing the sequel to that, The Stolen Child, which will take place in Ireland, where I ran so many trails and fell in love with the quiet western coast and upward to Country Sligo, where Yeats lived and wrote. My other upcoming novel is Up the River, which brings to light the terrible Canadian oil sands north of me and how a pipeline spill changes a small Appalachian town and native reserve. The other book I’m writing, a novella titled Bird Song, hastens the many island experiences I’ve either had or dreamed of. I guess if one thinks about bringing ecological elements into their novels, the inspiration is usually emergent from real experiences, although for fantasy fiction, a lot of it may be imaginary.

This new series, titled “Nova Scotia Wildlife,” is based upon the next chapter of my life as we make the move from Vancouver, BC, to Halifax, NS. I plan to write mostly about our new yard as well as other places we get out to see nearby. I don’t think I’ll be quite so prolific as someone like Jeff VanderMeer, whose Twitter feed covers not just his novels but also cool daily updates about what’s going on in his back yard, which he and his wife Ann have turned into a wildlife sanctuary. I think my favorite story is the local raccoon that rings his doorbell and runs away. 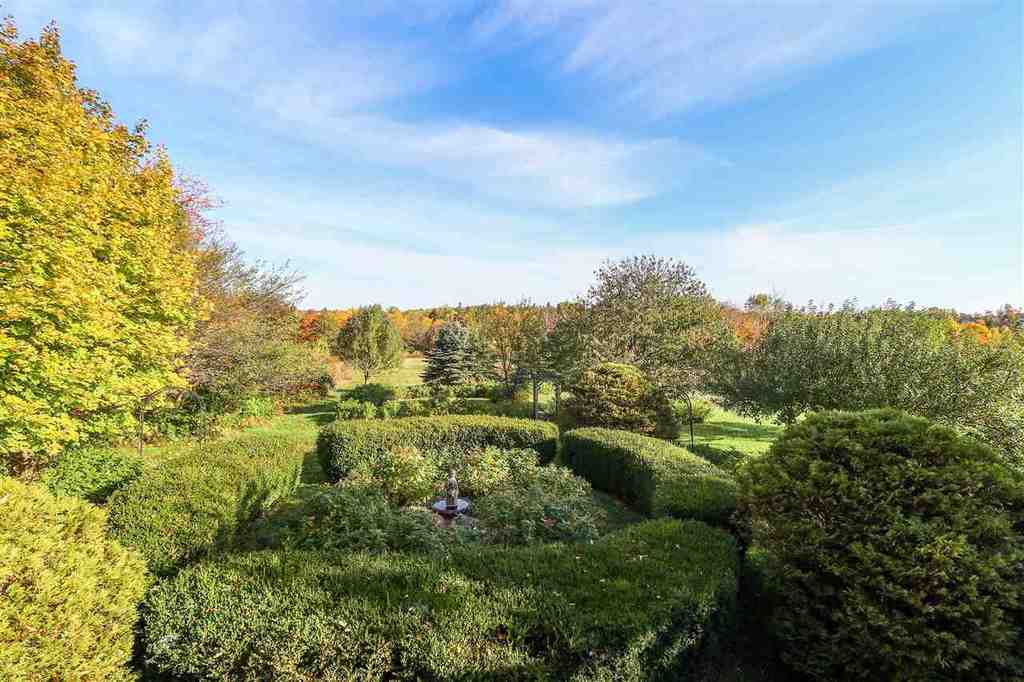 View of our new back yard

I’m still in the Vancouver area, but we recently closed on our new house and I’ll be heading out mid-March to take possession. The house itself is nice in that it has hardwood floors and some cool wood trim, but it it’s not fancy and is rather isolated outside Beaver Bank, not too awfully far from the Atlantic Ocean, which I’m super excited about. The house was also affordable, unlike the houses near Vancouver, BC. We were recently looking at all the surrounding towns with my family and giggling like school kids at some of the names: a town named Dildo in the next province over, and nearby: Sackville, Pockwok, Cow Bay, Meat Cove, Oldham, Pugwash. It all sounds a bit Hobbitsy to me.

What I like best about the house is its 1.55 acre lot and it being close to so many undeveloped areas. I plan to be outside more than inside. The previous owners did some landscaping: lots of roses, four bird baths, a gazebo, an arch over the front walk, a circle area that looks like juniper bushes, some apple trees, a couple oaks and maples, some spruce, and various other things we haven’t yet identified since we have seen the yard only in photos or where there was a lot of snow cover. There’s also a small garden plot, which I bet you anything the previous owners had flowers in, a compost bin, and a composter in the back yard. The half of the yard close to the house is landscaped, and then beyond the three spruce trees is just a blank yard with nothing but grass. There’s a flag pole in the middle; we’re not sure what that is. We plan to either plant some hybrid poplars or something else back there to feed a wood stove we’re installing in case power goes out in the winter, or do some bee grass and assortment of trees to draw in the local wildlife. We’ll also install solar panels in the next year, a great incentive offered by the city of Halifax. Beyond the edge of the back yard is a small woods, a road, and then a fairly good sized lake. To the north and northwest of the property, you really get into lakes, rivers, and forests, and not much development. It is totally different than the area we’re in now, which we’ve explored largely. There are wonderful pockets of rainforests here, and you can get into some isolated back country fairly nearby, but Vancouver extends into a metropolitan area that feels too crowded to us, and is surrounded by fossil fuel interests. 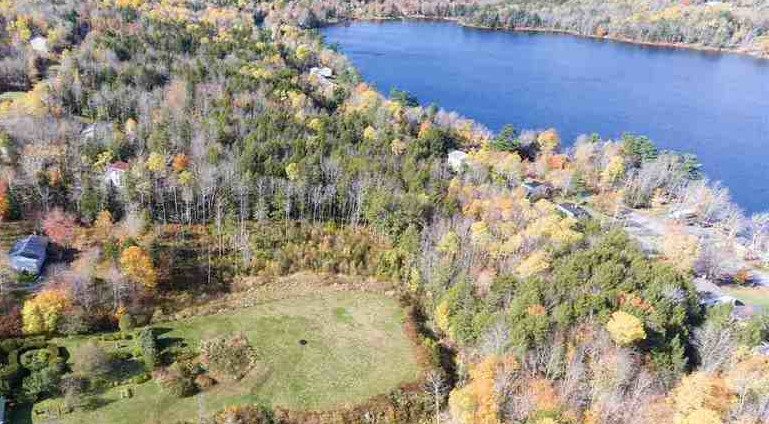 Aerial view of the back yard of our new house. The yard’s boundaries are bordered by trees in the very back and some sort of bush on either side. The yard closest to the house (not shown) is landscaped. The outbuilding shown is actually part of the neighbor’s property.

My first goal when moving, besides getting the house ready, is to take stock of the foliage in the back yard and make solid plans for this 1.55 acre’s future. I recently watched the documentary The Biggest Little Farm, which was really good at explaining how to solve issues with pests, especially in natural ways. We aren’t planning on a farm, but the couple who was trying to make their farm sustainable, for both their farming goals and the surrounding habitat, came across solutions by sitting back and looking at the big picture. Coyotes taking chickens? Put a sheep dog in with the chickens. Gophers populating everything? If the coyotes don’t eat the chickens, they’ll go after the gophers. Dried and caked land from previous monoculture? Worm compost and proper irrigation. And then growing cover crop. And also a diversity of plants. Starlings eating fruit from the fruit trees? Making conditions for raptors like owls and hawks to return to the area. A lamb whose mother died? Watching nature work its wonders while a lamb finds a surrogate mother. Emma the mama pig getting sick and almost dying from not eating? Some human intervention to coax her to eat but also bringing her happiness by allowing all her 14 piglets come nurse from her, where she then perked up and began eating again. All these things helped with the greening of the land and made it so that when it did rain the renewed soil could retain the water and drip it back to the natural aquifer, unlike the nearby monoculture-destroyed (and now dried up) soil where there was no water retention and the rain would further erode the soil in vast runoffs.

I don’t plan on having animals, though can see how the vast collection of animal poop was very helpful in fertilizing the farm land, which had a lot of diverse crops, including fruit trees. I want to grow a garden for our own sustenance, and possibly to share with friends and neighbors, so that we will not have to buy veggies or fruits at the store, or if we do have to, to just buy local. There are three nearby farmer’s markets. And I want to make a place wherein natural wildlife can thrive. I’ve been looking at Halifax Seed to plan my garden. The growing season seems short, but I might build some hoops or something. Our friends out there are similar to us; they have even more land and want to do some beekeeping. My husband and the other guy are both woodworkers and have been watching youtubes on how to build beehives.

Well, this first entry in the new monthly column is just a planning one. In three weeks, I will be there but might be without a computer for a while. I hope you enjoy this journey with me as I learn all I can, and most certainly will fail at times, to build a back yard garden and wildlife refuge.