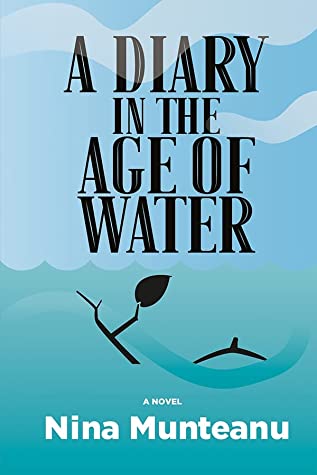 Nina Munteanu’s newest novel, A Diary in the Age of Water, deftly follows four generations of women fighting for—and exploring scientifically, spiritually, poetically, and philosophically—water. Lynna’s mother Una and daughter Hilde understand water scientifically, but Hilde, influenced by her love-of-life Hanna, often dips into pseudoscience, which Lynna grapples with. Lynna is a limnologist, a word that has been forgotten in our future world when our current post-truth atmosphere expands and “science” is superficially served on a platter by corporations. Lynna, a real scientist, has little use for water muses outside metaphor, though she transforms throughout the novel and begins to regret some of her prior actions in life. Then there’s the youngest sprite, Kyo, an electric-blue female with four arms, who is self-conscious about her appearance and searches for the truth about where she came from, why she is different, and why the world has become the way it is.

Kyo’s questions lead to her to a sacred library where she finds Lynna’s diary, which makes up the biggest portion of the novel. Why is the world the way it is, and who is she? I won’t spoil things, but Lynna’s diary exposes how the world has gotten the way it is. Lynna, born in our decade, writes about her life’s experiences and memories. Readers will recognize her past but not the world we’ve become. Lynna’s a pragmatic water scientist, one who lives and breathes knowledge. At the start of each diary entry is a definition of a scientific term, often relating to water, and then what follows is usually Lynna’s human experiences that reflect the biological behavior of the term. The experiences are regretful, nostalgic, solastalgic (yes, a term that’s real, describing the distress one feels with environmental change and destruction), and memorable. Lynna writes sentimentally about her mother and daughter—the people who mean the most in the world to her. But she also speaks of the world, and in the setting of the story—the last half of the 21st century—corporations and policies have continued to ruin natural ecology and change the long-term climate in the world. At the heart of everything, Lynna reminds her diary, is water. It makes up two-thirds of our bodies and two-thirds of the planet.

A Diary in the Age of Water is an insightful novel, where at the heart of life is water and when water is destroyed, so is life. Like Ouroboros, this destruction and creation cycle continues, as it has forever, only Diary shows the extreme events set into motion by humans on Earth that have caused the current cycle of destruction to happen before its time. The author is Canadian, where the story is set, and reveals through Lynna how Canadians have sold off their fresh water to companies in China and the US. And now water is so limited that having a cistern of any kind is illegal. Having lived in Canada now for nearly 15 years, I clutched at the places in the story that I’ve known, holding them dear and close as if embracing them could somehow prevent them from scampering off to their deaths: the Great Bear and boreal forests, the Athabasca Glacier, many rivers, some of which I’ve paddled on, like the Bella Coola and the Fraser—and even my current home, Nova Scotia. And I nodded to the Canadian stories the author revisits in the novel, stories I’ve learned while living here, like the true story of Josephine Mandamin, an Anishinaabe Elder, who performed water-healing walks around the Great Lakes (described in the novel as great puddles now). Diary gives testament, too, to the power of women and how they are and have always been the water-keepers. However, the first truth of water-keeping is that water cannot be kept.

Diary is eye-opening, even if you already understand and acknowledge the great climate catastrophe happening before our very eyes. The biological definitions and metaphors within the novel are salient and engrossing. They shape the reader’s understanding of the natural world and how humans are part of that world but don’t usually make the smartest decisions about how to live in it. This is fiction to be reckoned with. It joins many other recent novels where artists attempt to elucidate, explore, and transpose to story-form our changing world. New and diverse literary genres have sprung up in the last few decades to wrap their heads around real climate and ecological changes, and older genres, such as science fiction, have continued to fold these novels under their wing. Diary is a unique story among these because the reader gets to know a mother and a scientist’s viewpoint of the world that we’re in and are headed, and, if nothing else, we should be trusting our mothers and real scientists. That world is not pretty. It’s not a world we want to be in, but we’re already there, as Diary gives testament to early on. Diary is a cautionary tale rummaging through the forgotten drawers of time in the lives of four generations. It pulls out interesting tidbits, facts, and heartwarming memories along the way, and sets them afloat in the ever-present current of time. This whirling, holistic, and evolving novel comes alive, like we imagine water does.